Accessibility links
Whale Watchers Accused Of Loving Endangered Orcas To Death The question of whether boat-based watching tours are really harmless has become more urgent in Washington state, where Southern Resident killer whales have been declining since the 1990s. 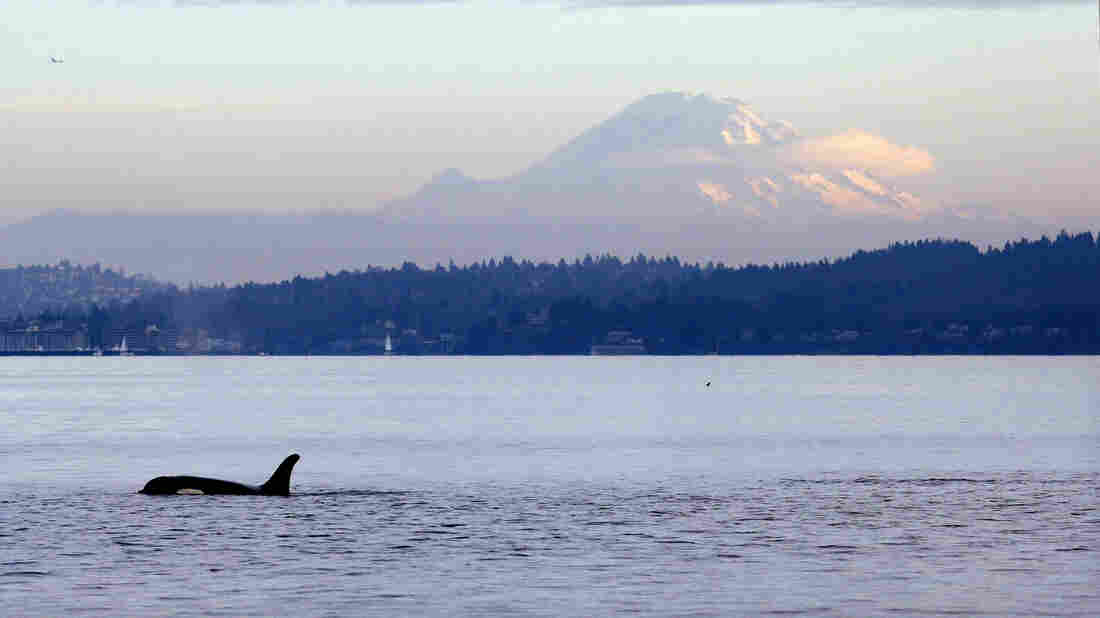 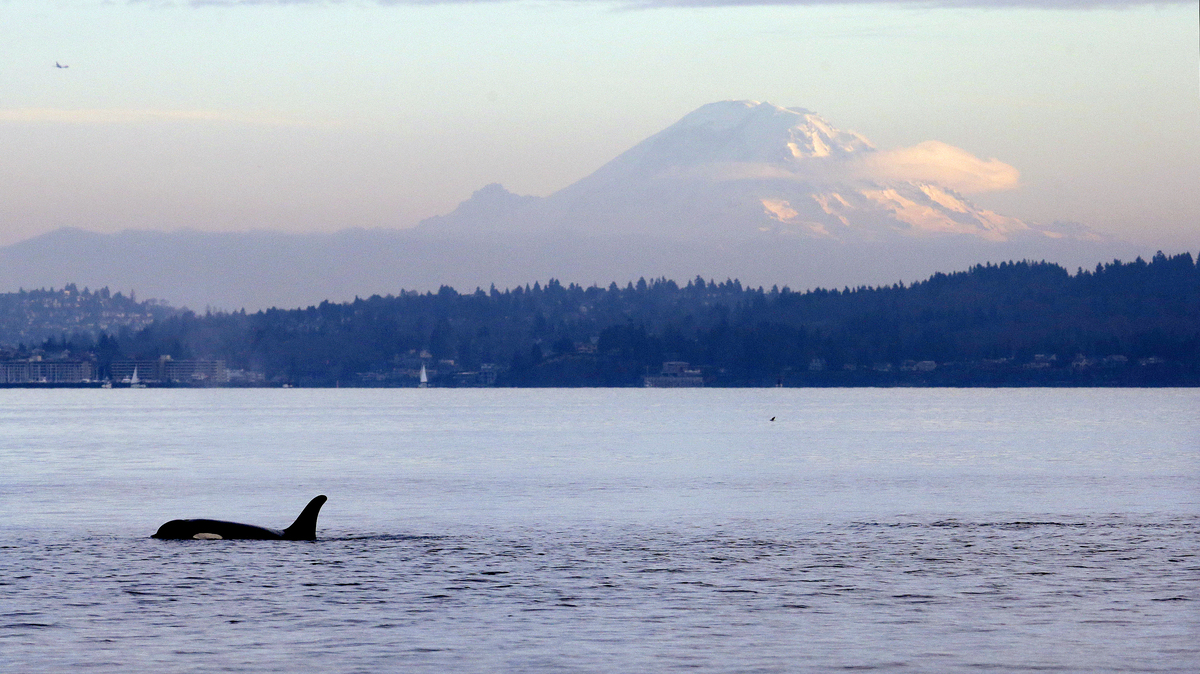 A southern resident orca whale swims in Puget Sound in view of Mount Rainier in 2014.

Whale watching is generally regarded as innocent fun. Unlike an aquarium park, whale watching boats take you to see majestic animals that remain free in their natural habitat.

But when it comes to marine mammals that are already struggling to survive, are the boat-based watching tours really harmless?

That question has become more urgent in Washington state, where Southern Resident killer whales that feed around the San Juan Islands in the summer months have been declining since the 1990s. There are only about 75 left. Orcas are a form of dolphin, though the cetaceans are also sometimes classified as "toothed whales."

Experts blame the shrinking runs of chinook salmon, the Southern Residents' preferred meal. (Other kinds of orcas hunt other sea mammals, and are not declining the same way.)

The plight of the Southern Residents gained international attention last summer, when one of the orca females was seen "grieving" for its dead calf, keeping the body afloat for 17 days.

A governor's task force responded last fall with a plan for saving the orcas — which included a recommendation to suspend all boat-based watching of Southern Residents for the next three to five years. The idea was to test whether giving the animals more space would help them.

Sorrel North welcomed the proposal. She's lived on Washington's San Juan Islands for decades, and still recalls how the whale watching industry boomed in the 1990s, after the "Free Willy" movies inspired more public interest in seeing the orcas in their natural habitat. Dozens of sight-seeing vessels would follow them around. 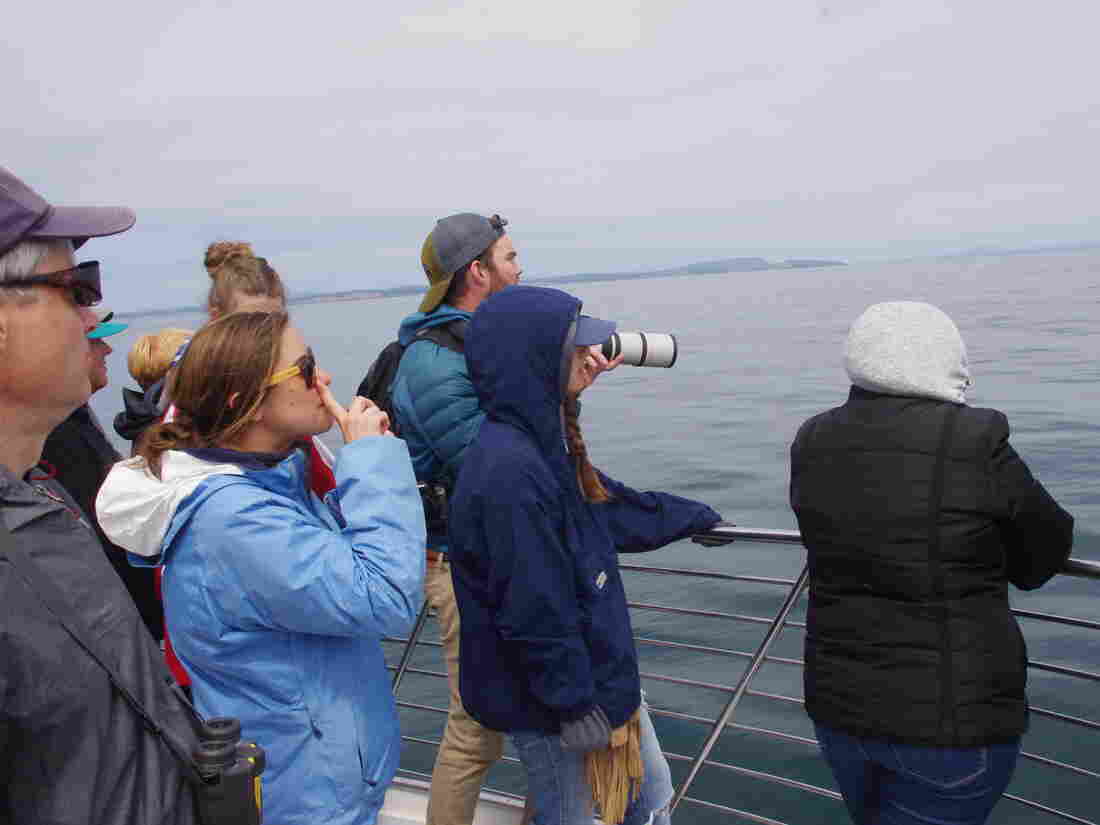 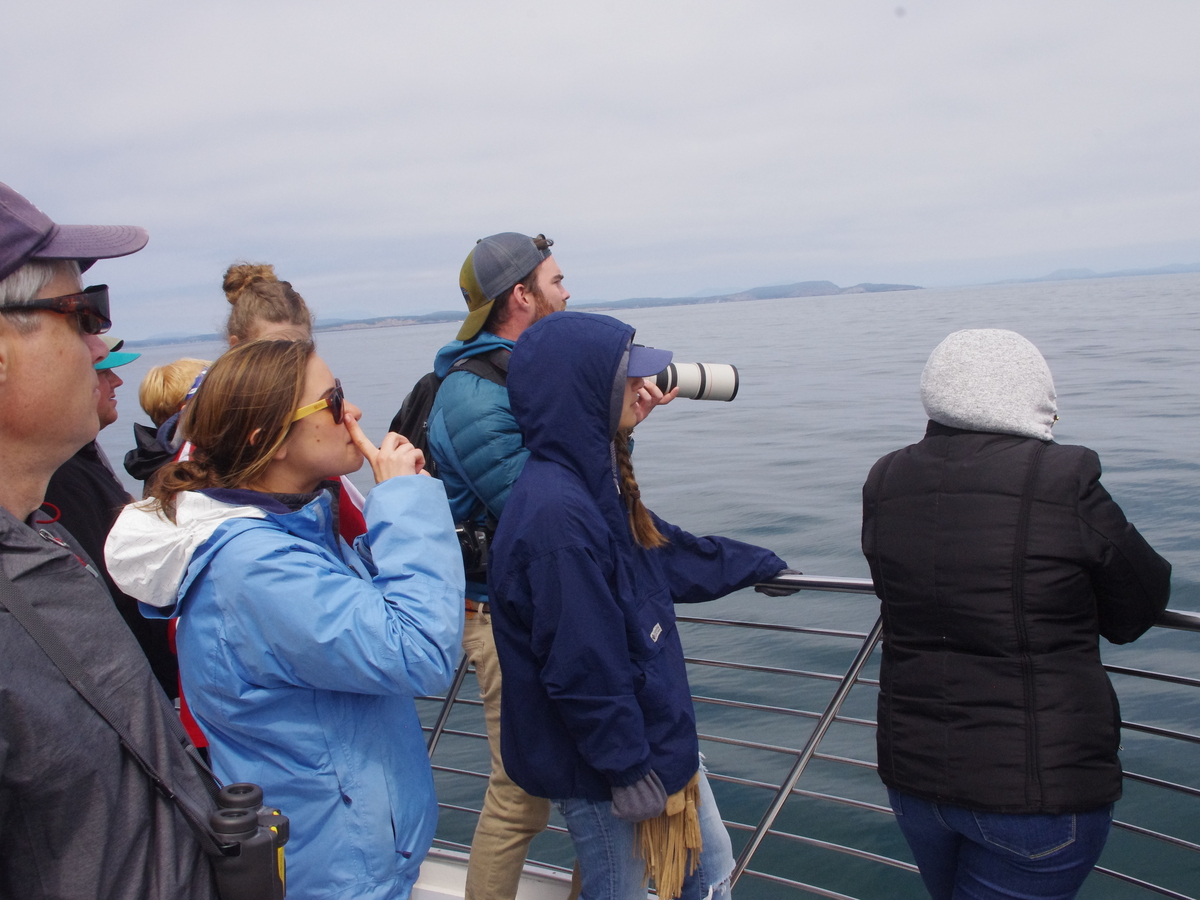 "I thought, 'My God, these whales are never going to have a break,'" she says. "If you have an ecologically sensitive place, you have a threatened species, to me it seems like what they need is to be left alone."

But earlier this year, after hearing from the whale watching industry, the Washington legislature decided against the moratorium recommended by the task force. Instead, it increased the minimum distance for watching the orcas from 100 yards to 300.

North says the compromise doesn't go far enough to protect a species that relies so heavily on sound to communicate and echolocate fish.

"Three hundred yards is nothing under water," she says. "I mean, a boat engine carries a long way. And that's in the air!"

She and a group called Southern Resident Protection are now gathering signatures for a ballot initiative in the county that covers the San Juan islands, to increase the minimum distance to 650 yards — the functional equivalent of an outright moratorium, given the difficulty in seeing orcas from that distance.

"We think it's very disingenuous to be treated the way we're being treated," says Brian Goodremont, owner of San Juan Safaris, a whale watching company based in Friday Harbor, Wash. 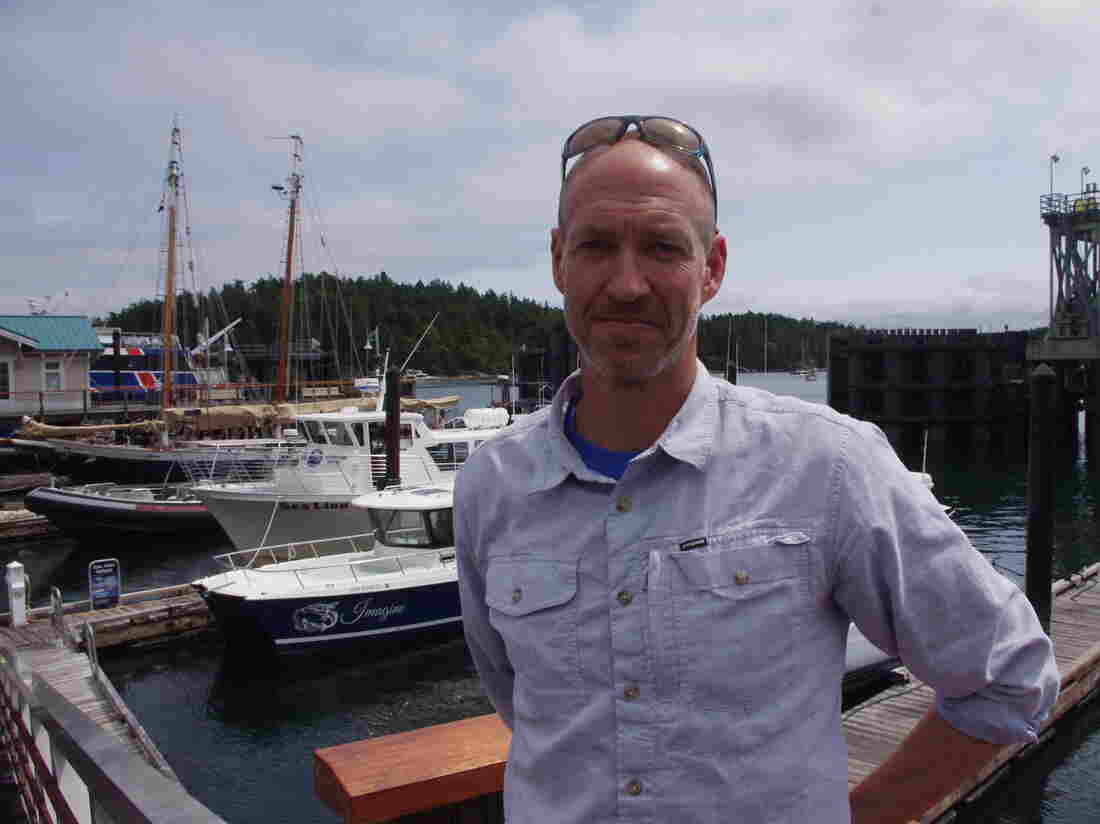 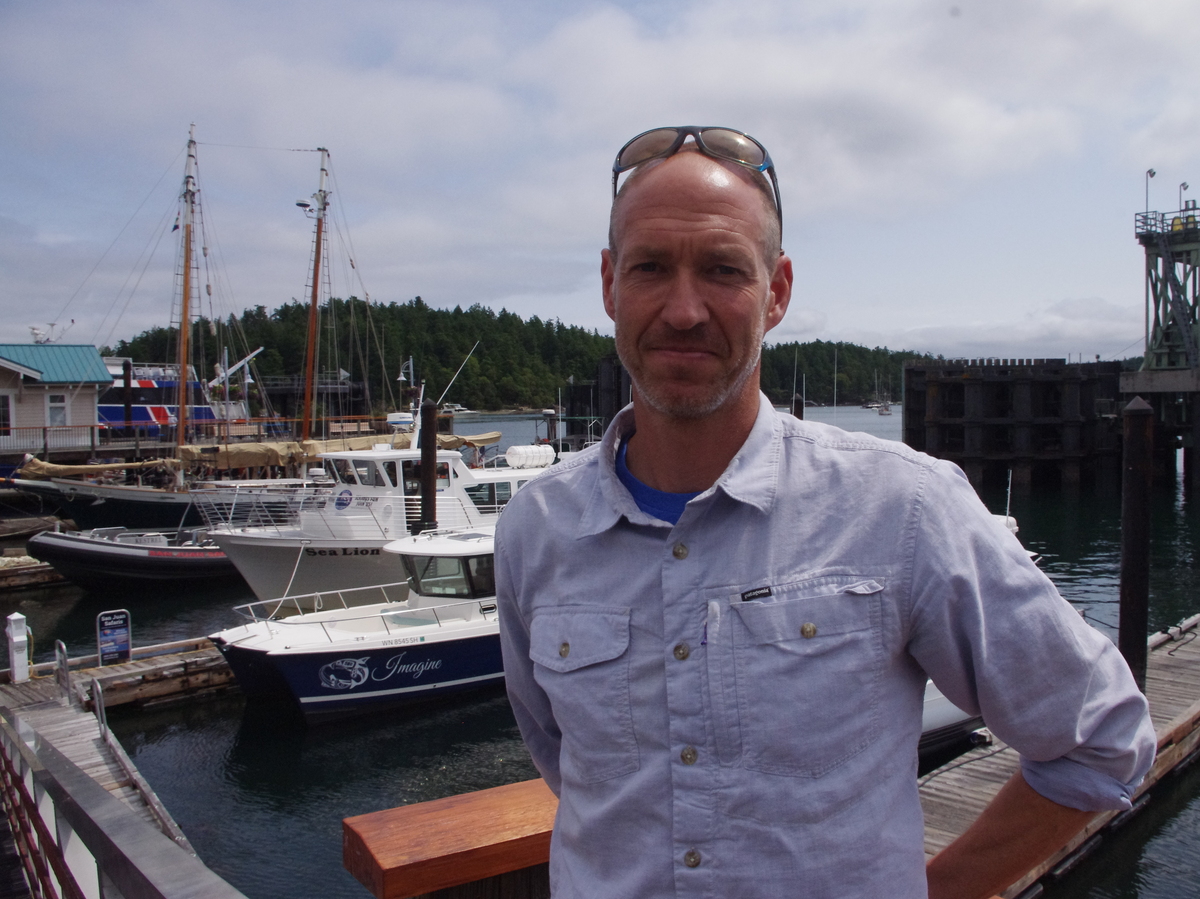 Brian Goodremont is owner of San Juan Safaris, a whale watching company in Friday Harbor, Wash. He says tour boats follow guidelines to "mitigate" any disturbance to the orcas.

He says whale watching companies follow voluntary guidelines to mitigate any disturbance, and that the respectful presence of their boats models good behavior for other boaters who see the orcas.

Goodremont points to their "go-slow" rule, limiting boats to 7 knots around orcas and whales.

"The acoustic output is right around 101 to 102 dB, and scientists say that's equivalent to a hard rain fall, or it's actually quieter than a wind storm," Goodremont.

He's referring to a 2017 NOAA Fisheries study which recorded the sound of tour boats from the perspective of the orcas, via sensors temporarily attached to the animals.

One of the authors of that study, research wildlife biologist Marla Holt, says under real conditions, the boats are not as quiet as the figure quoted by Goodremont.

"If you're talking about one vessel that happens to be quieter than some of the other ones, maybe that is true," she says. "So I'm not seeing 101 dB, if you're going below seven knots, as being a realistic number."

But Holt says measuring noise levels alone won't answer the question of how whale watching boats are affecting the orcas.

"That's just one piece of the puzzle," she says. "What we need to understand is, is it just the noise, or are there other factors to consider?"

For instance, Holt asks, what is the effect of the mere presence of the humans' boats?

"If you have a bunch of boats on the surface and a mammal that has to come to the surface to breathe air," she says, "how do those obstacles on the water affect their ability to chase salmon?"

Holt says understanding the boats' overall behavioral impact on the whales is something that she and her colleagues are still researching.

In the meantime, would it makes sense to impose a moratorium on whale watching, until they've learned more? Holt won't take a public position on this, but other scientists are freer to weigh in.

"The best available science is inadequate," says Christopher Clark of Cornell University, one of the country's foremost authorities on bioacoustics.

"We have very primitive understanding of the actual or potential costs to the animal," Clark says. "This is an animal that is almost entirely dependent upon ... sound, for all the basic activities of life."

Given the precarious state of the Southern Resident killer whales, he says it's time to err on the side of caution.

"When the population is actually so abnormally stretched," says Clark, "my conclusion is, let's just do the best we can, just leave them alone, give them someplace where they can actually go and behave and be as normal as possible."

But another researcher, one who's spent four decades studying the Southern Resident killer whales, defends the whale watchers. Ken Balcomb is the founder of the Center for Whale Research, and is widely recognized for the work he's done to identify the orcas and track their family relationships. He's convinced small vessels such as those used by whale watchers and researchers do not disturb the orcas. 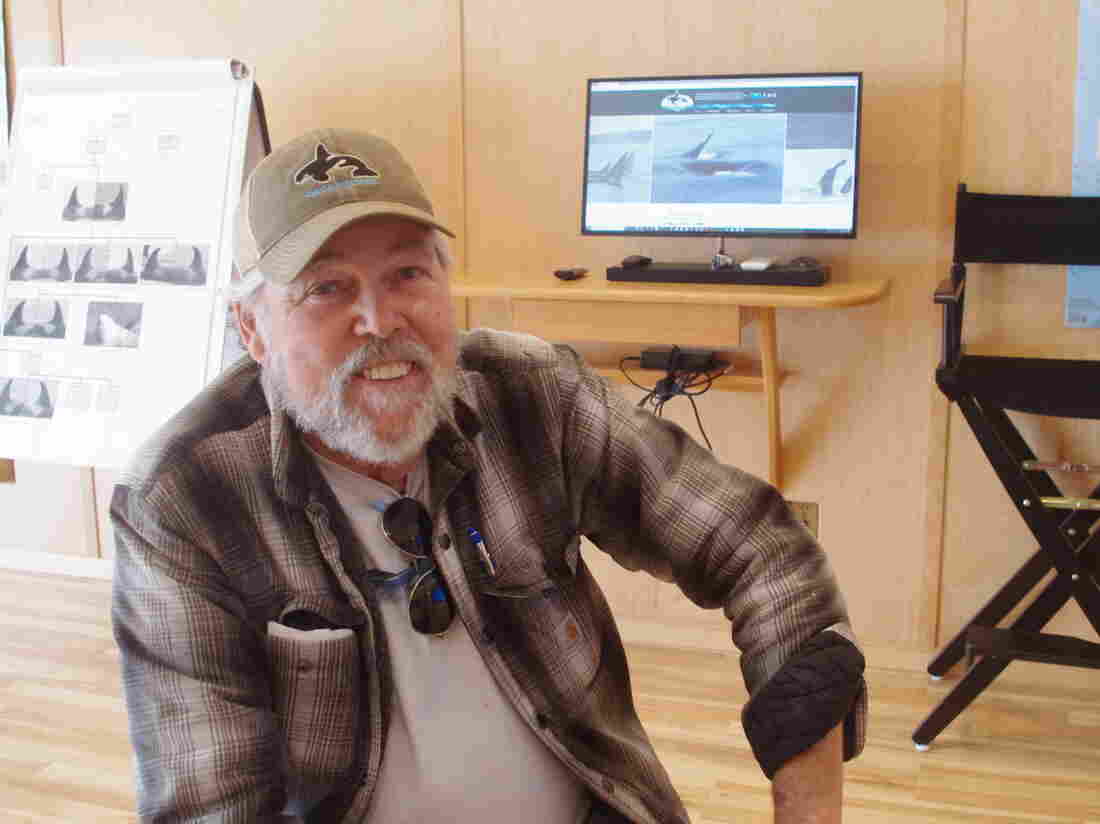 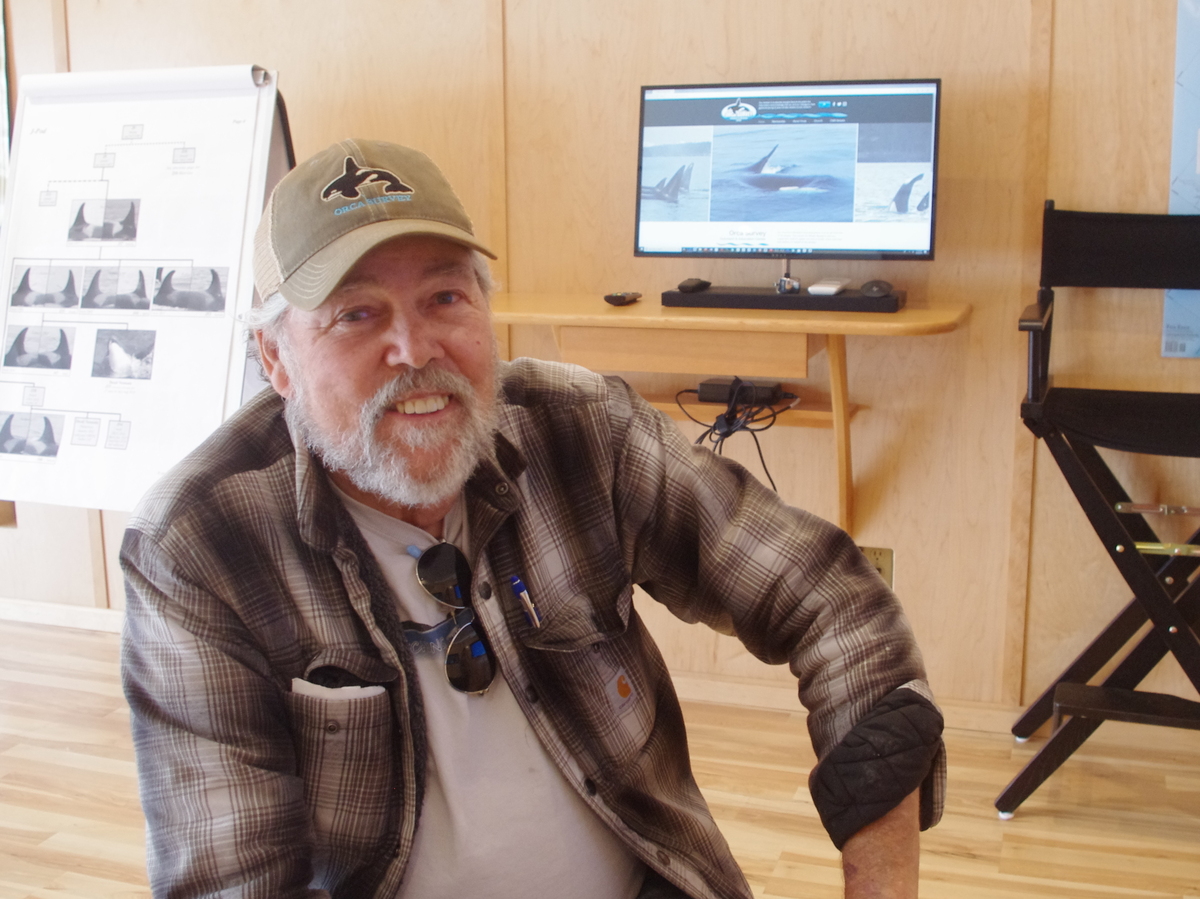 Ken Balcomb, longtime killer whale researcher, at the educational space of the Center for Whale Research, in Friday Harbor, Wash. He calls concerns about boat noise making it harder for orcas to find fish "baloney."

"Some of the argument is that ... they can't find the fish in all the racket. That's just baloney. They were fishing with an enormous amount of racket involved with the commercial fishing boats in the 70s, and they had no problem getting fish," Balcomb says.

He rejects the analysis of "outside researchers" who push the idea of a whale watching moratorium without the benefit of personal experience with the orcas, which he says are able to tell when boats are carrying people who are friendly. He says there were times in the 1970s when adult orcas went off to fish, leaving their juveniles near his research boat to be "babysat." 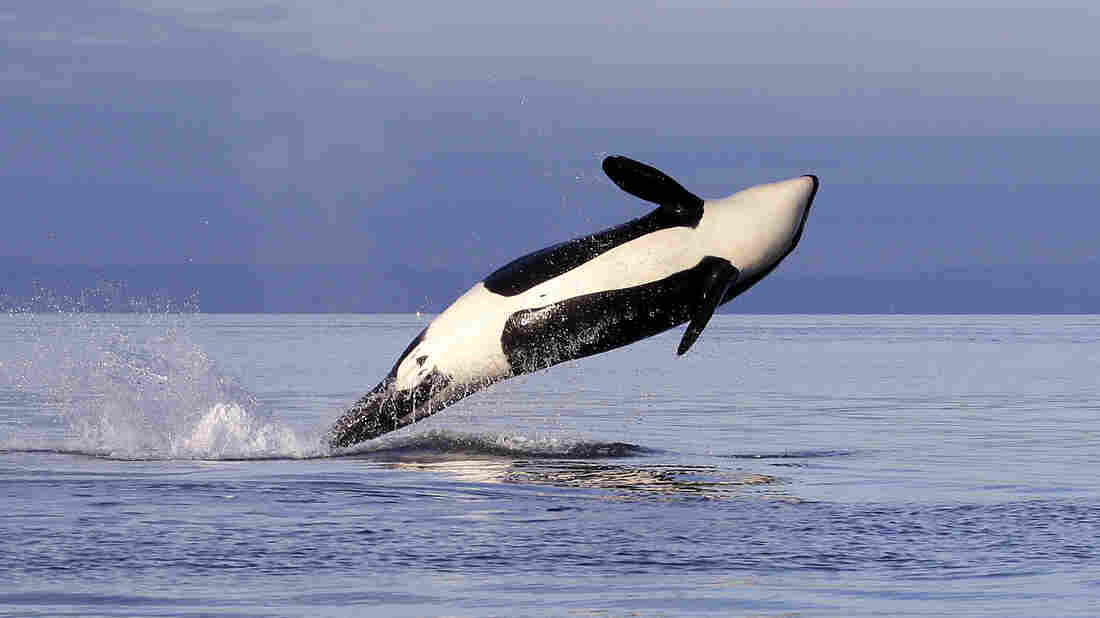 An endangered female orca leaps from the water while breaching in Puget Sound west of Seattle. The orca is from one of three groups of southern resident killer whales that frequent the inland waters of Washington state. Elaine Thompson/AP hide caption 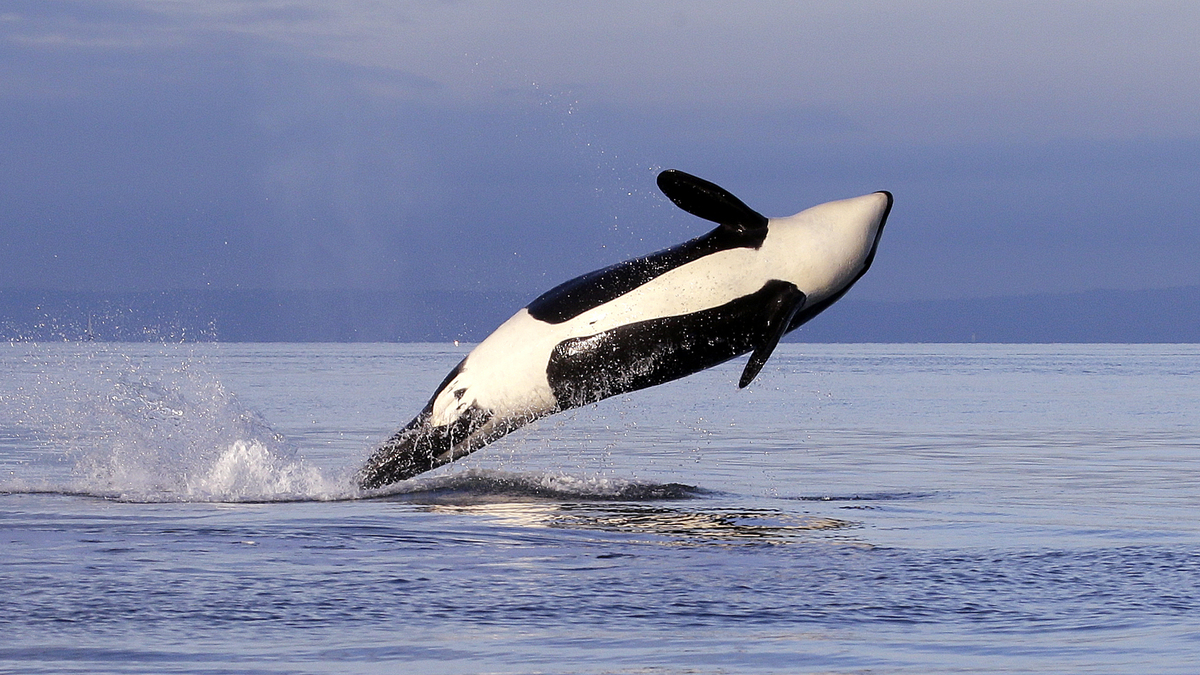 An endangered female orca leaps from the water while breaching in Puget Sound west of Seattle. The orca is from one of three groups of southern resident killer whales that frequent the inland waters of Washington state.

"Somehow they detect your vibes, whether you're aggressive and perhaps dangerous to them or whether or not you're cool with it. And they're cool with people who are cool with them."

Balcomb says the criticism of whale watching is a "red herring," meant to change the subject from the real threats to the whales.

"We caught all the fish. We dammed all the rivers. We destroyed the habitats that the little fish need to grow up in order to feed the whales ... We've overdone it," he says.

Still, given the shortage of salmon, Balcomb says he'd support giving orcas more peace and quiet — if it were done properly.

"I'm not averse to closing off the whole area. Let's get people off the water," he says. But he says in practice, commercial shipping, ferries and recreational boating are not about to disappear from the orcas' range, and he says it makes no sense to focus a ban on whale watching boats, which at least help to make more people aware of the orcas and their ecological plight.