Accessibility links
Guinness World Record For Longest Horn Span Goes To Texas Longhorn From Alabama This steer isn't much different from other Texas longhorns except it holds a world record. Poncho Via's horns were measured at nearly 11-feet wide, that's longer than the Statue of Liberty's face. 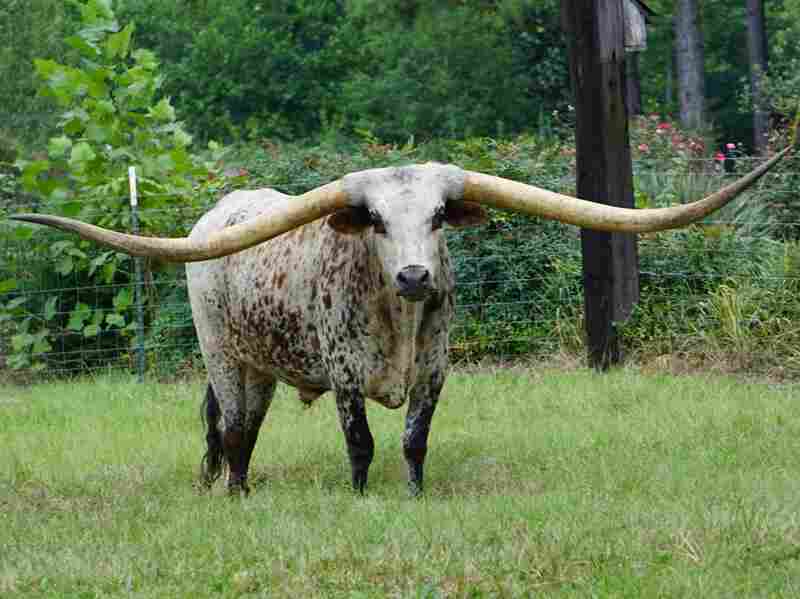 Poncho Via stands on a field of grass in Clay County Alabama at the Green Acres Farm in 2017. The steer currently holds the Guinness World Record for having the longest set of horns ever. The Pope Family hide caption 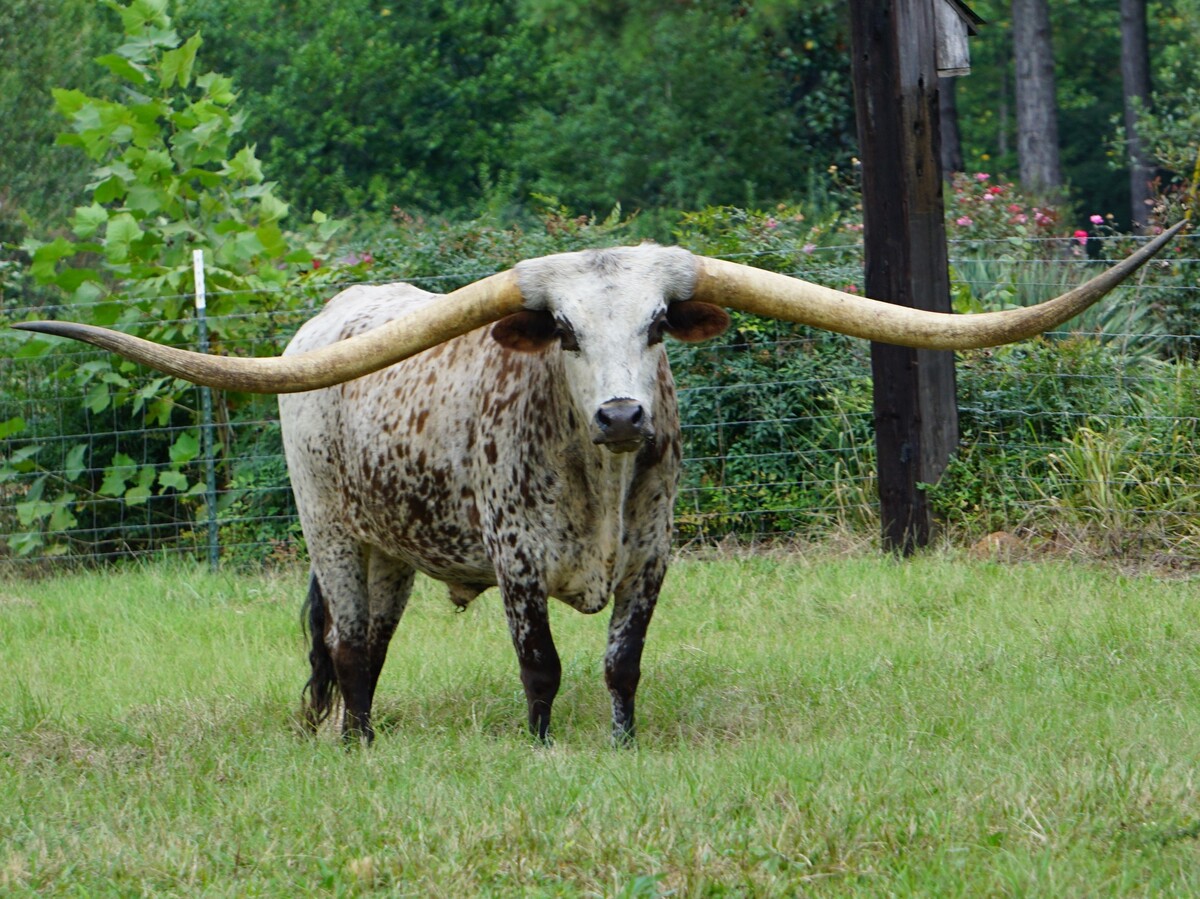 Poncho Via stands on a field of grass in Clay County Alabama at the Green Acres Farm in 2017. The steer currently holds the Guinness World Record for having the longest set of horns ever.

Six-year-old Poncho Via doesn't reside in the Lone Star State, but he set the Guinness World Record for possessing the longest set of horns on any other Texas longhorn ever.

Last month the steer's horns were measured from tip to tip at 10 feet, 7.4 inches. In comparison, Ponchos' spread is more than twice the width of a concert grand piano.

Poncho was raised by the Pope family on a small-town farm in Goodwater, Alabama. In 2013, Jeral Pope Sr. reached out to a local veterinarian asking for assistance in finding a pet longhorn ⁠— a fascination that came from a road trip out West, where the elder Pope saw longhorn cattle and decided he had to have one.

Once connected to a rodeo supplier, Pope Sr. purchased the 6-month-old animal who's been their "gentle giant" ever since. The name Poncho Via is a play on the famous Mexican revolutionary Pancho Villa. 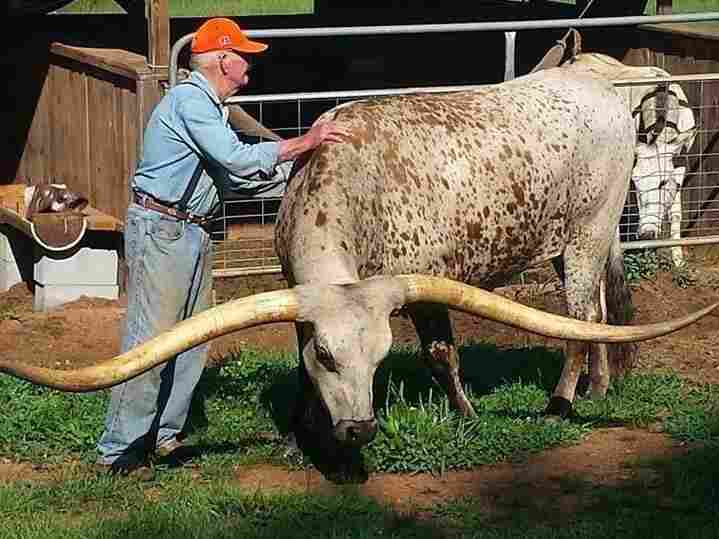 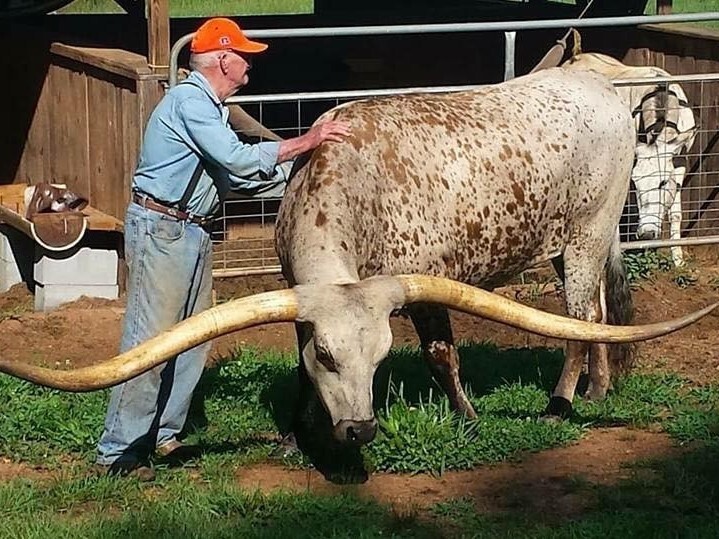 Jeral Pope Sr. tends to his pet steer Poncho Via in Clay County Alabama at the Green Acres Farm.

Months before Pope Sr. received Poncho, his son Dennis Pope bought himself a longhorn named Moo. Dennis remembers having friendly competition with his dad during the early years of their steers' lives.

"We would measure each others horns when they were young and ours was always a little ahead of that one," Dennis told NPR. "Until the horn shape on ours took a big turn up and Poncho's kept going out straight and it kept growing and growing."

The Pope family has since kept a close eye on the length of Poncho's horns, waiting for them to expand long enough to break the record. They even checked previous steers' measurements to see what they were up against and noticed how much Poncho was growing for his age.

"They were all 9 to 12 to 15-years-old when they were measured for the world record and Poncho's much younger than that," he said. "There's no telling how much he'll grow. "

However, despite his promising future, Poncho did not meet the records' standards until days before Guinness verified his length this year.

"I measured him in April and he was not above the world record, he grew a half inch of horn length from April to May," Dennis said.

Similar to their weight gain, horn growth occurs quickly during their early years, then levels off as they grow older, according to the Texas Longhorn Journal. Although a longhorn is built to manage the length and weight of their rack, the Pope family said the public has expressed some concern regarding Poncho's horns. Dennis ensures that Poncho is adaptable, smart and has learned exactly where the tips of his horns are.

"He can run through the trees on the farm...he knows where any post is, any obstacle, he just tips his head and goes on. It's amazing to see him run." Dennis said.

The steer unseated fellow record-holder and Texas-based longhorn Sato by just over an inch. Poncho will turn 7-years-old on October 3rd.