Accessibility links
Jared Kushner Meets With Lindsay Graham And Dick Durbin On Possible DACA Deal Jared Kushner met privately with Sens. Lindsey Graham and Dick Durbin, the two architects of plans to provide citizenship for those brought to the country illegally as children. 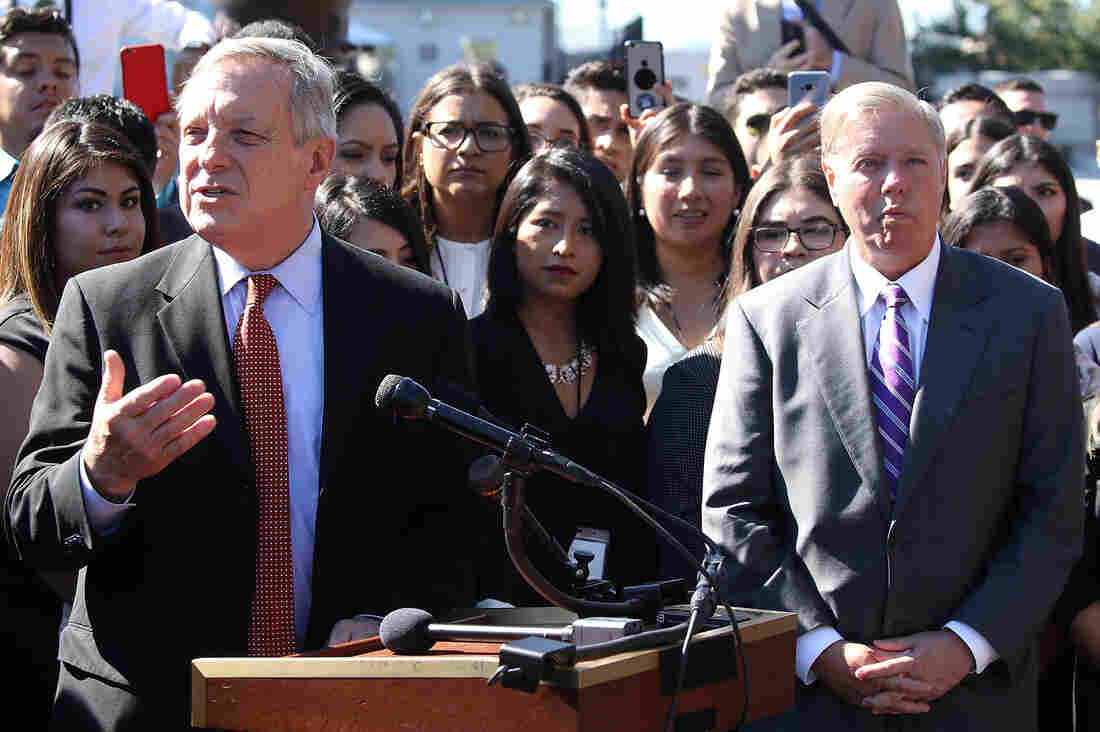 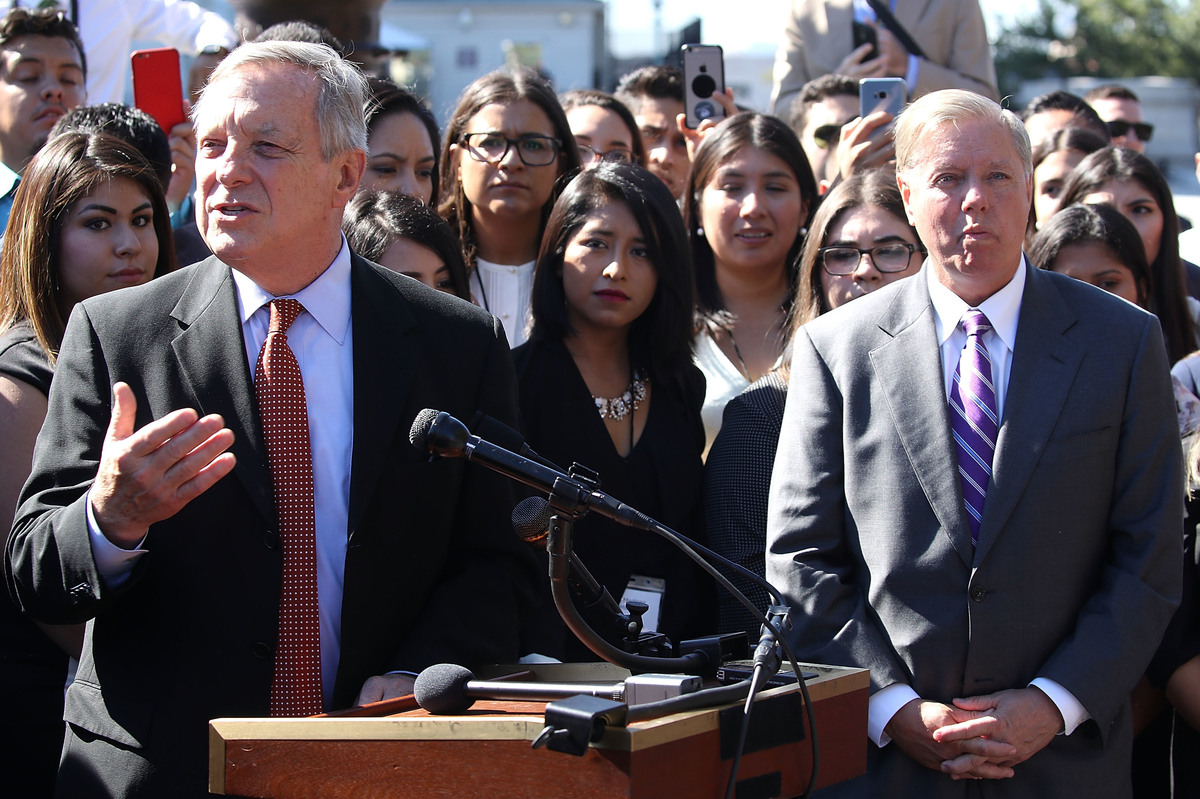 Sen. Dick Durbin, D-Ill., left and Sen. Lindsey Graham, R-S.C. at a news conference with recipients of the Deferred Action for Childhood Arrival program (DACA) during a 2017 news conference.

President Trump's senior adviser and son-in-law Jared Kushner met privately on Tuesday with the longtime Senate architects of plans to provide citizenship for those brought to the country illegally as children.

The meeting has raised concerns among immigration hardliners that Trump's immigration policy is being "watered down," will give Democrats an upper hand and alter the focus of the debate from strictly enforcement to a deal that would include legalization.

Kushner was spotted leaving Sen. Lindsey's Graham, R-S.C., office Tuesday morning where he also met with Sen. Dick Durbin, D-Ill., where the three discussed Graham's immigration bill that seeks to change asylum law to help stem the flow of migrants from Central America to the U.S.-Mexico border, according to a Senate GOP official with leadership.

But another person familiar with details of the discussions said that Graham and Durbin want Kushner to support measures that would include protections for those brought to the United States illegally as children, many of whom are currently protected by the Obama-era Deferred Action for Childhood Arrivals program.

Neither Graham nor the White House responded to questions about the meeting. When asked about the status of talks with Kushner and Graham, Durbin told NPR they were ongoing and that no deal was imminent.

The White House knows that immigration plan is unlikely to go far in Congress where Democrats will be reluctant to support any enforcement proposal that's not offset with significant legalization of immigrants currently in the United States without authorization to work.

"We would have a very different situation," McAleenan said of past legislation put forward by Graham and Durbin that also included stronger border enforcement. "We would have 20,000 additional border patrol agents, we would have technology comprehensively deployed ... we would be a lot more secure on the border."

Graham said at the hearing that he's willing to work with Democrats to "fix this mess."

Graham and Durbin have long worked together on bipartisan legislation that would allow young adults to stay in the United States if they came to the country as children, graduated from high school or obtained a GED, and pursued college, military service or at least three years of employment.

The proposal has bipartisan support, but not enough to make it into law. The issue has drawn more scrutiny since Trump took office and later rolled back an Obama-era order protecting many so-called Dreamers from deportation.

The meeting is already raising concerns among conservatives who have long feared that Graham would use his strong relationship with Trump to eventually push for protections for those in the country illegally.

RJ Hauman, the government relations director at FAIR, which advocates for stronger immigration enforcement, called the push a distraction and said the focus needs to remain on securing the U.S. border and tightening asylum rules.

"Creating a path to citizenship for illegal aliens has been Graham and Durbin's top immigration priority for many years," Hauman said.

"In March, as our nation's immigration crisis was spiraling out of control, they decided they would rather provide a new incentive for people to bring or send their kids here illegally by introducing another DREAM Act," Hauman added. "The notion that they're huddling up right now in a bipartisan effort to truly stop the crisis is laughable."