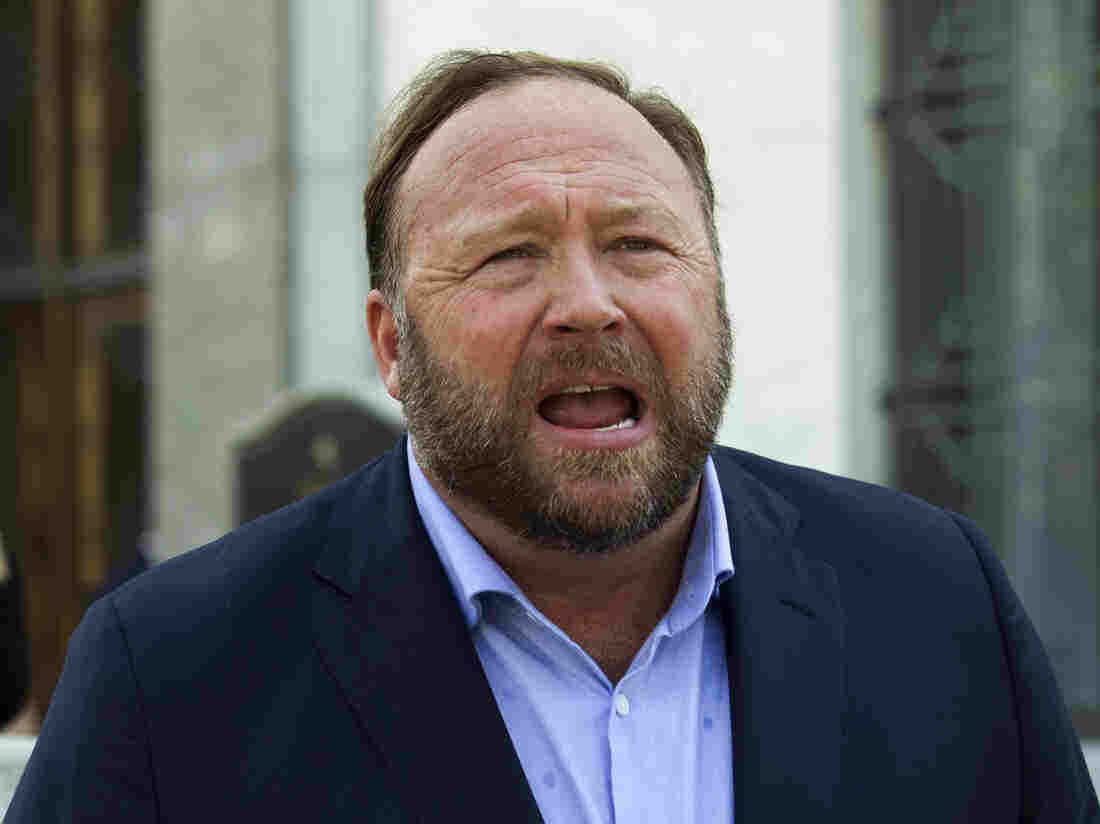 Alex Jones, pictured in 2018, was sanctioned by a Connecticut judge on Tuesday after railing on the attorney representing victims' families in a defamation suit against the Internet provocateur. Jose Luis Magana/AP hide caption 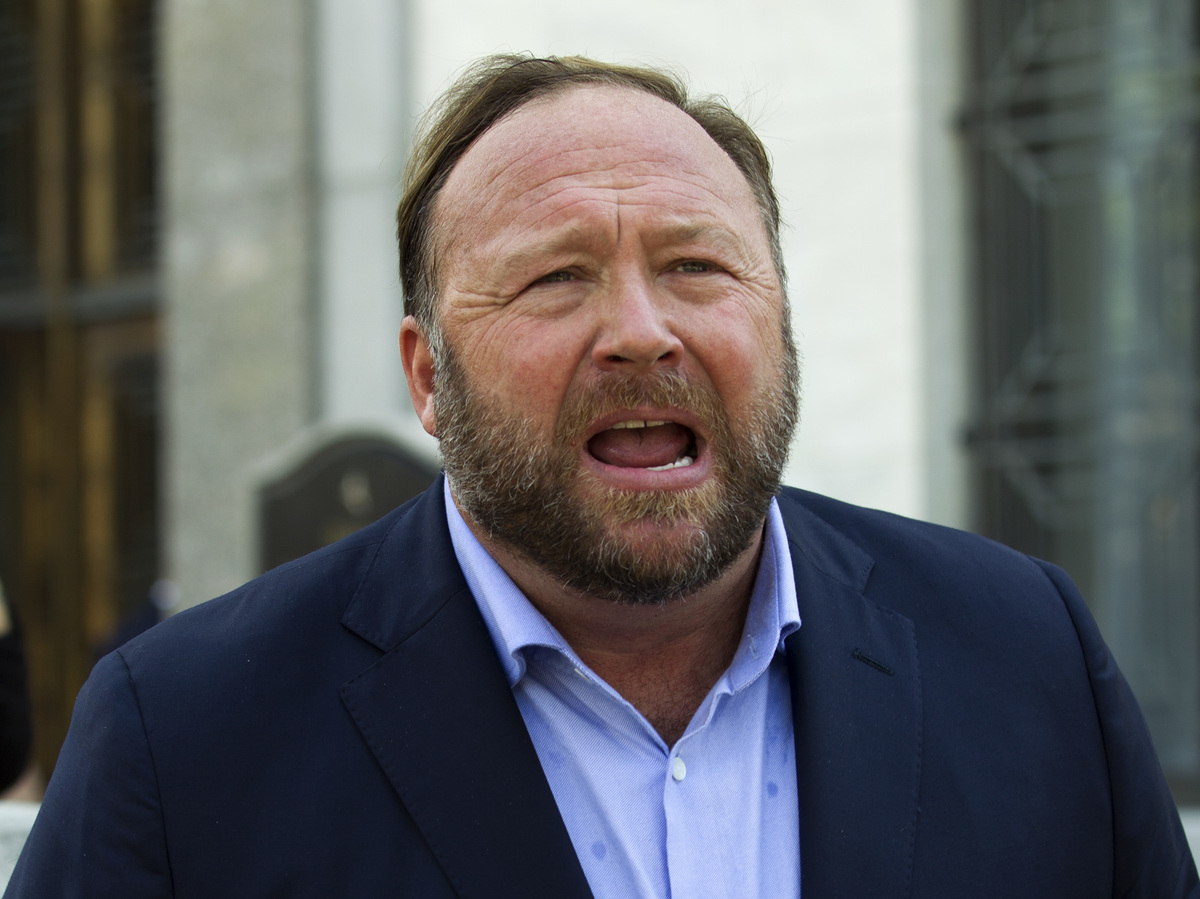 Alex Jones, pictured in 2018, was sanctioned by a Connecticut judge on Tuesday after railing on the attorney representing victims' families in a defamation suit against the Internet provocateur.

Leonard Pozner, whose 6-year-old son was killed in the 2012 massacre at Sandy Hook Elementary School, has been battling against conspiracy theorists for years, and on Tuesday he scored a victory against deniers who claim that the shooting that left 20 first-graders dead never happened.

A Wisconsin judge issued a summary judgment in favor of Pozner in a defamation lawsuit against the authors of a book called Nobody Died at Sandy Hook, a 400-page book purporting a series of false claims, including ideas that the mass shooting was a FEMA drill to promote gun control and that the grieving father had fabricated his son Noah's death certificate, which is a crime in Connecticut.

The lawsuit focused narrowly on the claim by James Fetzer and Mike Palecek that Pozner had forged or faked the death certificate, though it also alluded to other convoluted theories advanced by Fetzer on his blog, including the theory that Noah was not Pozner's son.

"Fetzer acted with actual malice," court documents say, also accusing the writer of publishing statements knowing that they "were false or with reckless disregard for the truth or falsity of the statements."

Fetzer responded to the decision in a tweet, writing, "My day in Court did not turn out as expected." He insisted that he was "able to produce decisive proof the [copy of] death certificate" he retrieved from the Internet is a fabrication, but said the judge ruled against him because his evidence "lacks certification."

Initially, the case also included Florida-based publisher Moon Rocks Books, but the principal officer of the company, Dave Gahary, settled the case following a May deposition with Pozner.

"I looked him in the eyes, listened to his testimony, had frank discussions about our respective concerns, and, in the end, shook his hand," Gahary said in a statement on Monday.

"My face-to-face interactions with Mr. Pozner have led me to believe that Mr. Pozner is telling the truth about the death of his son. I extend my most heartfelt and sincere apology to the Pozner family," he said, also offering his condolences.

Gahary agreed to stop publishing future editions of the book and to stop selling it entirely by the end of the month.

A trial to decide damages has been set for October.

Although it was a singular legal win for Pozner as the sole plaintiff, Zimmerman said the decision is also significant for nearly all of the families of Sandy Hook victims.

"Most of them are mentioned one way or another in these books. Most of them are accused of being either crisis actors or a part of a government cover-up. And so having that book go off the shelves is a victory for not just the families of Sandy Hook but really for the people in the community," Zimmerman said.

To prove the authenticity of the child's death certificate, which has been circulated by Pozner in a crusade to combat the myriad false narratives championed by deniers, Zimmerman said he offered the court the original Connecticut state document.

"We were able to hand that to the judge and let him feel that raised seal with his own hands," Zimmerman said.

He also took an extraordinary step: He filed a motion asking the court to appoint an independent expert to conduct a postmortem paternity test using Noah's limited remaining DNA matter.

"We obtained a sample of Noah Pozner's DNA from the medical examiner's office and had a court-ordered expert do DNA testing to confirm that Leonard Pozner was the biological father of the person whose body was examined by Connecticut's state medical examiner," Zimmerman explained.

"We wanted to make sure that our hands were out of it, and no one could ever accuse us of having injected ourselves into the process in a way that could impact the outcome."

Pozner has been at the forefront of the legal fight against claims by hoaxers that the Sandy Hook shooting was a staged event. He is involved in at least nine lawsuits in multiple states, including more defamation cases that have grown to include other victims' family members.

A separate defamation lawsuit against conspiracy theorist and InfoWars owner Alex Jones took a strange turn on Tuesday when a Connecticut judge sanctioned the Web-show host for what she called a despicable tirade against the attorney representing the families of victims of the school shooting.

During his show on Friday, Jones launched into a five-minute profanity-laden tirade claiming he was the target of a malware attack that planted child pornography on the InfoWars servers. He accused Christopher Mattei, who is representing the families in their suit against Jones, of instigating the alleged attack.

"We all know who did it," said Jones, who was accompanied by his lawyer Norm Pattis.

Jones held up a picture of Mattei during much of the rant, pounding his fist into the photograph.

The illegal images were discovered after InfoWars was forced to turn over email metadata from the company's servers, according to court documents filed on Monday. FBI officials determined the images "had apparently been sent to Infowars email addresses."

The filing adds: "It is worth noting that if the Jones Defendants had engaged in even minimal due diligence and actually reviewed the materials before production, they would have found the images themselves. Because the Jones Defendants did not do that, they transmitted images to the plaintiffs that if they were knowingly possessed is a serious federal crime."

"His conduct, and I think the court concluded this, really threatened the integrity of judicial proceedings here in Connecticut," Mattei told reporters after the ruling.

Pattis said his client's conduct was inappropriate but not threatening. He later said he would appeal the ruling.

While Jones asserted for years that the Newtown, Conn., tragedy was a "giant hoax" and "that the whole thing was fake," he has since acknowledged that the shooting occurred.

In a March deposition, Jones blamed his unfounded opinion on "a form of psychosis" he claimed he had in the past "where I basically thought everything was staged ... even though I'm learning a lot of things aren't staged," The Associated Press reported.