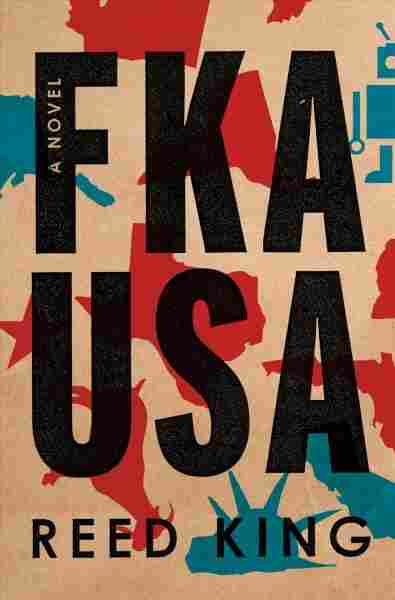 Hey, you. Did you really like A Canticle For Leibowitz but think it needed more robot hookers and a talking goat? Then FKA USA is the book for you.

Did you think The Road suffered by not having enough gunfights with Mormons? Do you have a fondness for The Wizard Of Oz but believe, deep in your weird little heart, that it suffered a crippling lack of footnotes, bad language and fart jokes? Yeah, me, too. Which is (maybe) why I liked FKA USA so much.

I mean, there were a lot of reasons. It is, in many ways, the sort of book I'm always looking for — a glorious mess; a jangly, spit-and-duct-tape creation that you can feel shaking itself to pieces even as you read; a visionary head-trip of apocalyptic political satire; a kitchen sink quest story that reads like someone's high school RPG session gone full-on Technicolor bonkers. Plus, there's a talking goat (as I mentioned) which, swear to god, is like the least strange thing about it.

The story shakes out thusly: It is the year 2085. The United States of America has devolved into a bunch of warring territories, barely controlled by a series of psychotic, despotic, oligarchic corporations. Everything can kill you — the water, the food, the road gangs, the apocalyptic weather — and everything will likely try at least once a day.

Into this mess comes Truckee Wallace, our unlikely, unwilling hero. Truckee is a teenaged factory worker in Crunchtown 407 (formerly Little Rock, Arkansas) who is concerned only with doing his job, playing video games with his friends and losing his virginity — though not, of course, in that order. Truckee is an orphan, good-hearted (sometimes), but not terribly bright. So of course, one day he is called on by the President and asked to deliver a talking goat named Barnaby to San Francisco and, in so doing, save the world.

'Recursion' Is A Puzzle Box Of Time Travel, Memory And Death

Buckle Up For This 'Million Mile Road Trip'

No. Go read that again. Because the absolutely, mind-blowingly, ridiculously crazy thing about that last sentence is that within the universe of Reed King's FKA USA it makes complete sense. Because this is the sort of book where that kind of thing just happens, but does so in a consensual brain-space where all of the active words could've been jumbled up ("... one day he is called on by Barnaby the Talking Goat and told to deliver the President to San Francisco ...") and it still would make sense.

Couple things you should know: Reed King is not a real person. It's the pseudonym of some supposedly famous book and TV writer so, you know. There's that.

A significant portion of FKA USA's page count is made up of footnotes and quotes from other sources that aren't FKA USA — largely from a mythical, made-up book called The Grifter's Guide To The Territories FKA USA — and the whole thing is pitched as the complete, unabridged and annotated 10th edition of the memoirs of Truckee Wallace. And say what you will, but that particular brand of pedagogical soft-shoe will trip my nerd switch every single day. I love the abuse of footnotes. I love the story-within-a-story set-up. I love the opportunity it offers for multi-layered satire.

It rarely works, (and it doesn't always work here), but when it does, FKA USA becomes like Rudy Rucker writing The Handmaid's Tale. It's an irradiated, poisoned, oppressive dystopia, sure, but that doesn't mean we can't all have a little fun along the way, right?

This is a weird, loud, violent, funny, profane journey across the blasted ruin of our future from the first word to the last, that never pretends to be anything else. And if you aren't interested in the ride, that's fine.

And that's what this book is doing — the trick it is playing on everyone. If the absurdity levels were taken down a few degrees, it would be just another bunch of grimdark post-apocalyptica to add to the ever-growing pile. But it is precisely in the way that King (or whoever) cranked the Disaster-Mo-Tron up to 11 and offered a world where EVERY near-future nightmare came true at once that makes it something different. And it is his (or her) ability to carve a completely human center out of that storm of sound and fury — to make Truckee, his robot friend Sammy, lobotomized ex-convict Tiny Tim and Barnaby the Talking Goat completely whole and soft and vulnerable and real and completely unsurprised in the face of so much swirling oddity — that makes it great.

Also, it is occasionally beautiful (which always comes as a slap-in-the-face surprise). Like this, which is King inside Truckee's head, seeing a real live bird.

Something small and dark and unfamiliar darkened the narrow alley of sky above us before settling on a grid of wires to preen. It took me a half second to remember what to call it.

It sang, and kept singing, as we marched in slow procession toward the base. And in my head, I wasn't going off to die. I was a vibration made of birdsong. I was riding high out of the world, on a back made of dark feathers. I was held inside a fragile, hollow throat that still managed, somehow, to sing.

I know, right? That's just not the kind of writing one generally expects from this kind of thing.

So read it. Or don't. It ain't gonna be everyone's brand of vodka, for sure, but if it isn't yours, you'll realize it quickly. Because FKA USA does not hide its heart at all. This is a weird, loud, violent, funny, profane journey across the blasted ruin of our future from the first word to the last, that never pretends to be anything else. And if you aren't interested in the ride, that's fine.

That just means more goats and robots for the rest of us.