Accessibility links
Joy Harjo Named U.S. Poet Laureate, Becoming First Native American In That Role A member of the Muscogee Creek Nation, the 68-year-old poet and musician says she bears "the honor on behalf of the people and my ancestors" and aims to serve as an "ambassador" of the art form. 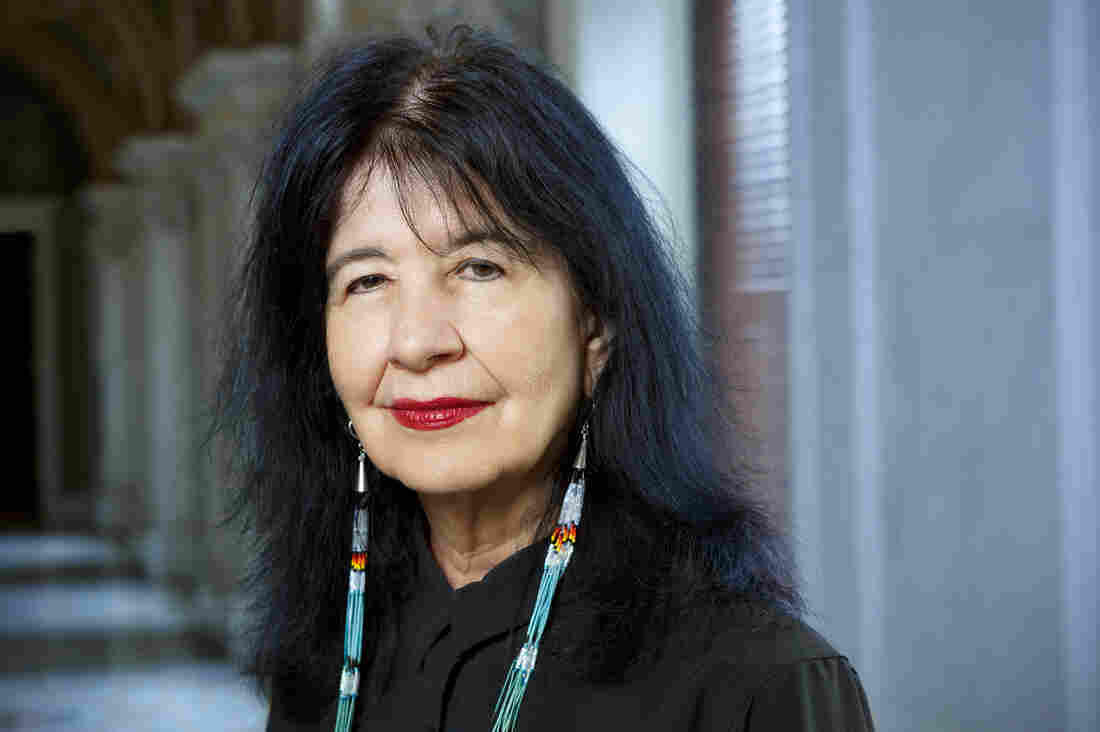 Joy Harjo will become the 23rd poet laureate of the United States, making her the first Native American to hold the position. Shawn Miller/Library of Congress hide caption 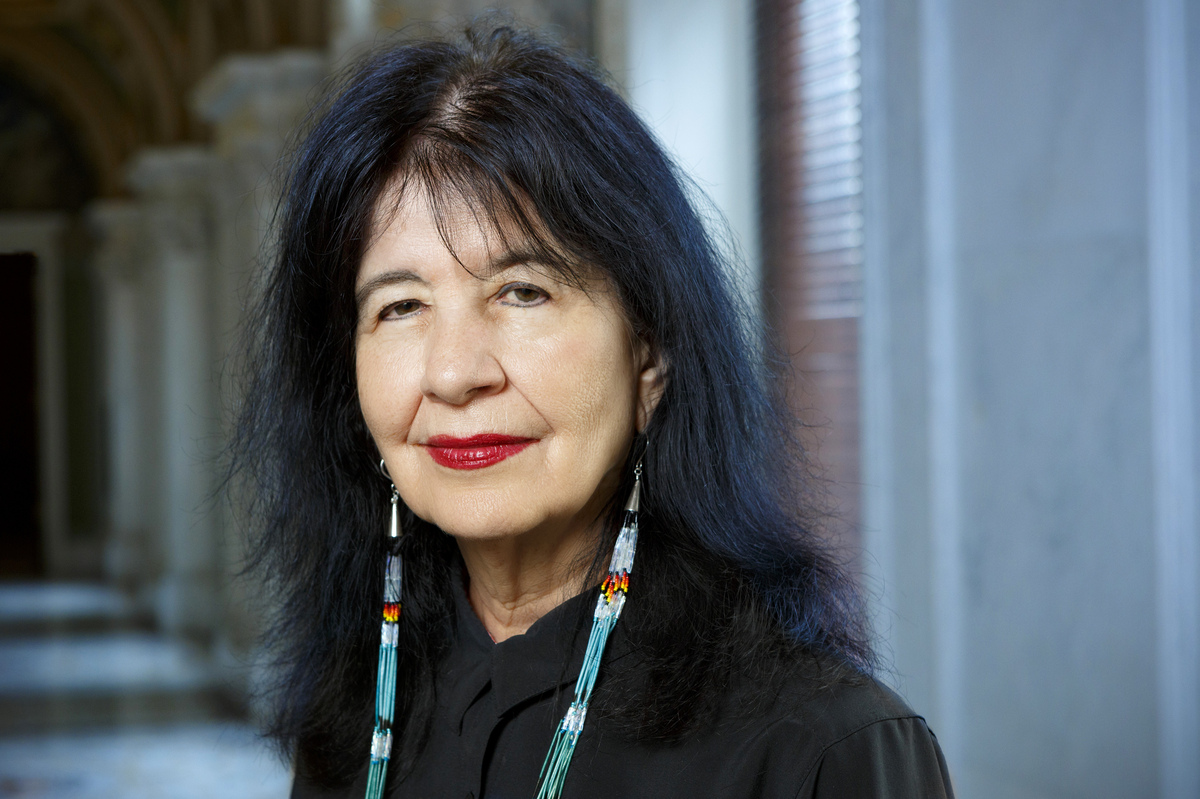 Joy Harjo will become the 23rd poet laureate of the United States, making her the first Native American to hold the position.

Poet, writer and musician Joy Harjo — a member of the Muscogee Creek Nation — often draws on Native American stories, languages and myths. But she says that she's not self-consciously trying to bring that material into her work. If anything, it's the other way around.

"I think the culture is bringing me into it with poetry — that it's part of me," Harjo says in an interview with NPR's Lynn Neary. "I don't think about it ... And so it doesn't necessarily become a self-conscious thing — it's just there ... When you grow up as a person in your culture, you have your culture and you're in it, but you're also in this American culture, and that's another layer."

Harjo, 68, will represent both her Indigenous culture and those of the United States of America when she succeeds Tracy K. Smith as the country's 23rd poet laureate consultant in poetry (that's the official title) this fall. Her term, announced Wednesday by Librarian of Congress Carla Hayden, will make her the first Native American poet to serve in the position.

"It's such an honoring for Native people in this country, when we've been so disappeared and disregarded," Harjo says. "And yet we're the root cultures, over 500-something tribes and I don't know how many at first contact. But it's quite an honor ... I bear that honor on behalf of the people and my ancestors. So that's really exciting for me."

A native and resident of Tulsa, Okla. — she is also the first Oklahoman to be named U.S. poet laureate — Harjo says the appointment is an opportunity to continue a role she has often assumed throughout her career: as an "ambassador" of poetry. The Library of Congress calls the position "the nation's official poet" and assigns a "modest minimum" of official duties in order to enable individual projects designed "to raise the national consciousness to a greater appreciation of the reading and writing of poetry."

"Since I started writing in 1973, I've almost always been on the road with poetry, and meeting people and communities ... every state in the union, small and large communities, for years on behalf of poetry — and the gift that poetry brings to all of us," Harjo says.

Harjo is the author of eight books of poetry, including the American Book Award-winning In Mad Love and War (1990). She has also written a memoir and literature for children and young adults. She has taught at the University of California, Los Angeles, and the University of Tennessee.

A new collection called An American Sunrise will be published in August. Its title poem interpolates and salutes a famous Gwendolyn Brooks poem, but imbues it with new meaning about the persistence of Native people: "We are still America. We / know the rumors of our demise. We spit them out. They die / soon."

Born in 1951, Harjo did not have an easy start to her life as a multidisciplinary artist. Her memoir Crazy Brave discusses her father's alcoholism, her abusive stepfather, teen motherhood, a failed first marriage and living in poverty — before finding the "spirit of poetry."

The memoir also discusses the time that she heard Miles Davis on her parents' car radio and experienced a transcendental moment, which she connected to her mother's singing and her deep identification with music. Much later in life, nearing age 40, she picked up a saxophone for the first time. She has now released five albums of original music and won a Native American Music Award in 2009.

Harjo talks about her poetry as a kind of music — like making a fire by slamming two rocks together. "You hit words together with rhythm and sound quality and fierce playfulness," she says.

But in terms of subject matter, she also sees poetry as "an immense conversation of the soul." She says she's driven by "justice and healing and transformation: The idea that you can ... transform the images of our people from being non-human to human beings, and the ability to transform experiences that could potentially destroy a people, a family, a person to experiences that build connection and community."

Her work often merges the global and the personal, the imagery of the natural world and that of the inner one. She speaks often not only of the diversity of humanity, but also of its unifying story, its oneness.

"To her, poems are 'carriers of dreams, knowledge and wisdom,' and through them, she tells an American story of tradition and loss, reckoning and myth-making," said Hayden in a statement. "Her work powerfully connects us to the earth and the spiritual world with direct, inventive lyricism that helps us reimagine who we are."

In "This Morning I Pray for My Enemies," which she read for NPR, she relates the sun to the heart.

And whom do I call my enemy?
An enemy must be worthy of engagement.
I turn in the direction of the sun and keep walking.
It's the heart that asks the question, not my furious mind.
The heart is the smaller cousin of the sun.
It sees and knows everything.
It hears the gnashing even as it hears the blessing.
The door to the mind should only open from the heart.
An enemy who gets in, risks the danger of becoming a friend.

The poem appears in Harjo's 2015 collection Conflict Resolution for Holy Beings. Harjo says that humanizing and healing will be her aims as poet laureate — "a healing of people speaking to each other, with each other," she says.

"Communities that normally would not sit with each other, I would love to see ... interchanges with poetry," Harjo says. She suggests gathering "cowboys and Indians" for a poetry summit. "I really believe if people sit together and hear their deepest feelings and thoughts beyond political divisiveness, it makes connections. There's connections made that can't be made with politicized language."