Accessibility links
Spy Satellite Images Show Himalayan Glaciers Melting At Accelerated Pace Scientists are using old spy satellite images to measure the effects of climate change. They're finding that glaciers in the Himalayas are melting twice as fast as they were a few decades earlier. 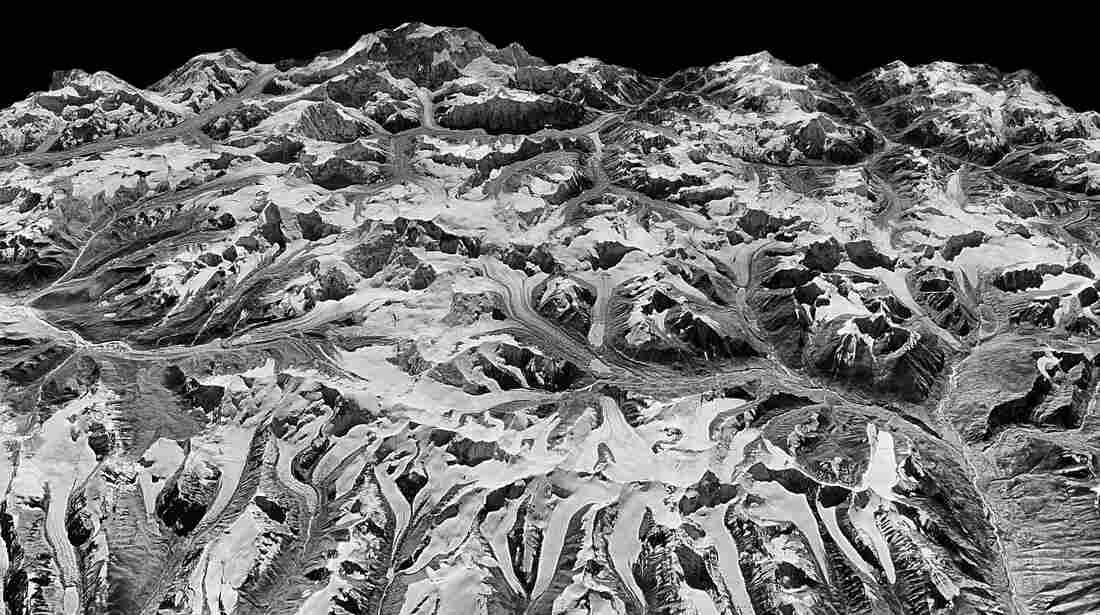 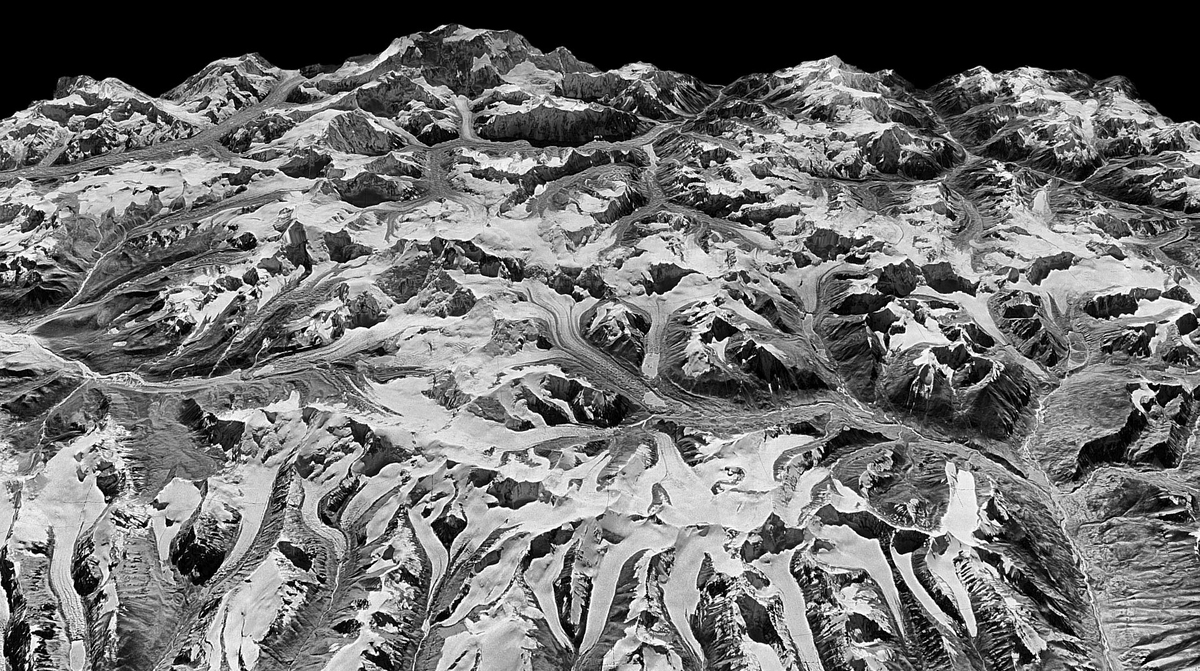 This oblique view of the Himalayan landscape was captured by a KH-9 Hexagon satellite on Dec. 20, 1975, on the border between eastern Nepal and Sikkim, India.

The world's glaciers are melting faster than before, but it still takes decades to see changes that are happening at a glacial pace.

To look back in time, researchers are turning to a once-secret source: spy satellite imagery from the 1970s and 1980s, now declassified. "The actual imagery is freely available for download on the USGS website, and people can use it," says Josh Maurer, a doctoral student at Columbia University's Lamont-Doherty Earth Observatory.

Maurer is the lead author of a study using satellite imagery to show that in the past 20 years, Himalayan glaciers melted twice as fast as they did in the 1980s and '90s. The work was published Wednesday in the journal Science Advances.

The spy satellite images come from KH-9 Hexagon military satellites, launched during the Cold War to help the U.S. peer over the Iron Curtain, says Summer Rupper, a co-author of the study. Each satellite was about the size of a school bus and carried miles of film. Packaged in buckets equipped with parachutes, the film was later ejected into the upper atmosphere and plucked out of the air over the Pacific Ocean by Air Force pilots. Most Hexagon images were declassified in 2011 as a continuation of a 1995 executive order by President Bill Clinton to release spy satellite footage that was "scientifically or environmentally useful."

Maurer's study compares the spy satellite images, mostly from the mid-1970s, with more recent images taken by ASTER, an instrument attached to a NASA satellite that was developed jointly by the U.S. and Japan and launched in 1999.

"What we're able to do using spy satellites is to cross the entire Himalayan range, [and measure] hundreds of glaciers of all different types and sizes, over a much longer period of time," says Rupper, an associate professor of geography at the University of Utah.

Glaciologist Etienne Berthier of the French national research agency CNRS, who was not affiliated with the research, said via email that the fact that the study used the same method of analysis across the Himalayas, "[made] their conclusion of doubling of mass loss rate very convincing."

The Himalayas contain many different types of glaciers — such as those covered in debris or located near bodies of water — in many different environments. The researchers were surprised to find that the rate of melt was consistent across all the glaciers they studied. "In the east, the precipitation in the Himalayas occurs in the middle of the summertime [driven by monsoon winds], whereas in the west, most of the snow comes [in the winter] along a westerly storm track," Rupper says. "So you actually have two very different settings for these glaciers. Yet, from east to west, we're seeing a relatively uniform change in mass."

That the Himalayan glaciers are melting faster signals unpredictability in coming years. Those glaciers supply fresh water to mountain communities and feed rivers that billions of people in South Asia rely on.

Sonam Futi Sherpa, a doctoral student at Arizona State University, co-authored a paper on how glaciers in the Everest region change with precipitation and storms. She says: "It's important to have long-term monitoring, not just in Nepal," where she's from, "but in Bhutan, Tibet, other places" for two main reasons: figuring out future water availability and anticipating possibly catastrophic events such as floods and landslides.

Deborah Balk of the City University of New York, who formerly served on a National Research Council panel on Himalayan glaciers and climate change, said via email that "understanding glacial ice loss is very important, particularly in South Asia where the consequences of climate change are already unfolding" — consequences such as extreme heat in India, sea-level rise and salinization in Bangladesh, and regional flooding.

Over the next 80 years, according to a 2019 study of the Hindu Kush Himalaya region, up to two-thirds of the Himalayan glaciers are projected to melt because of climate change. 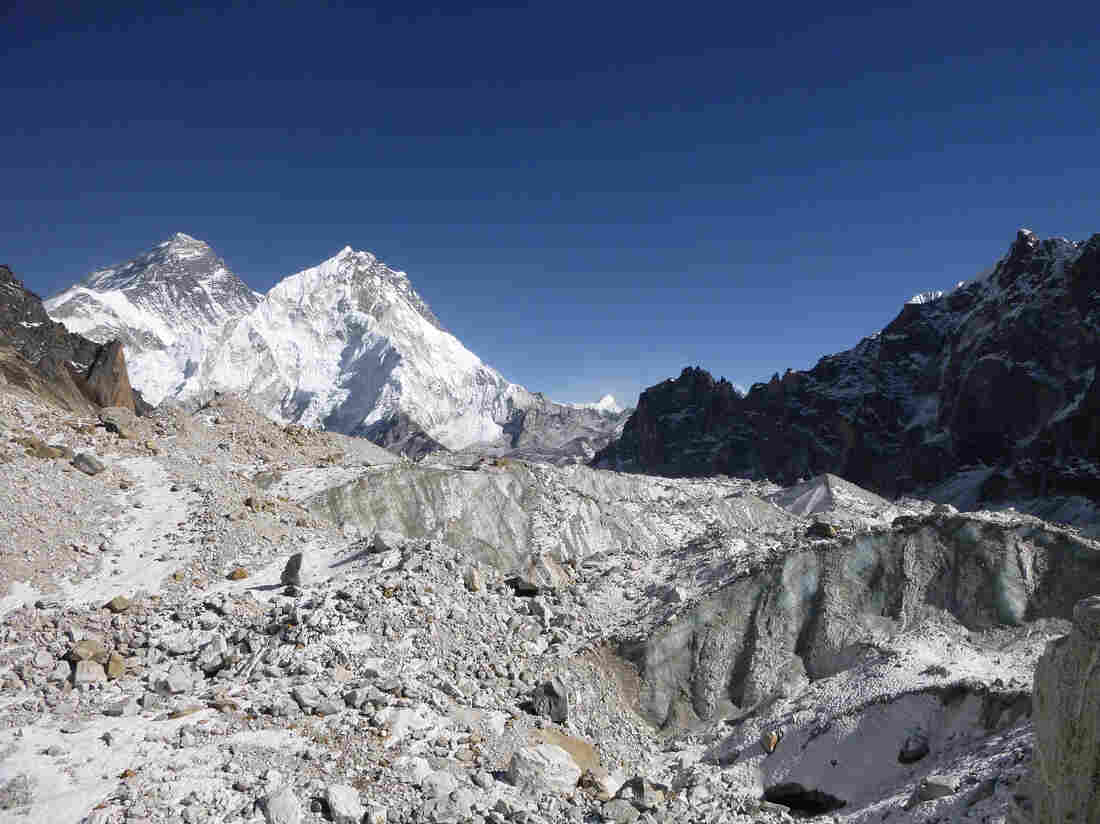 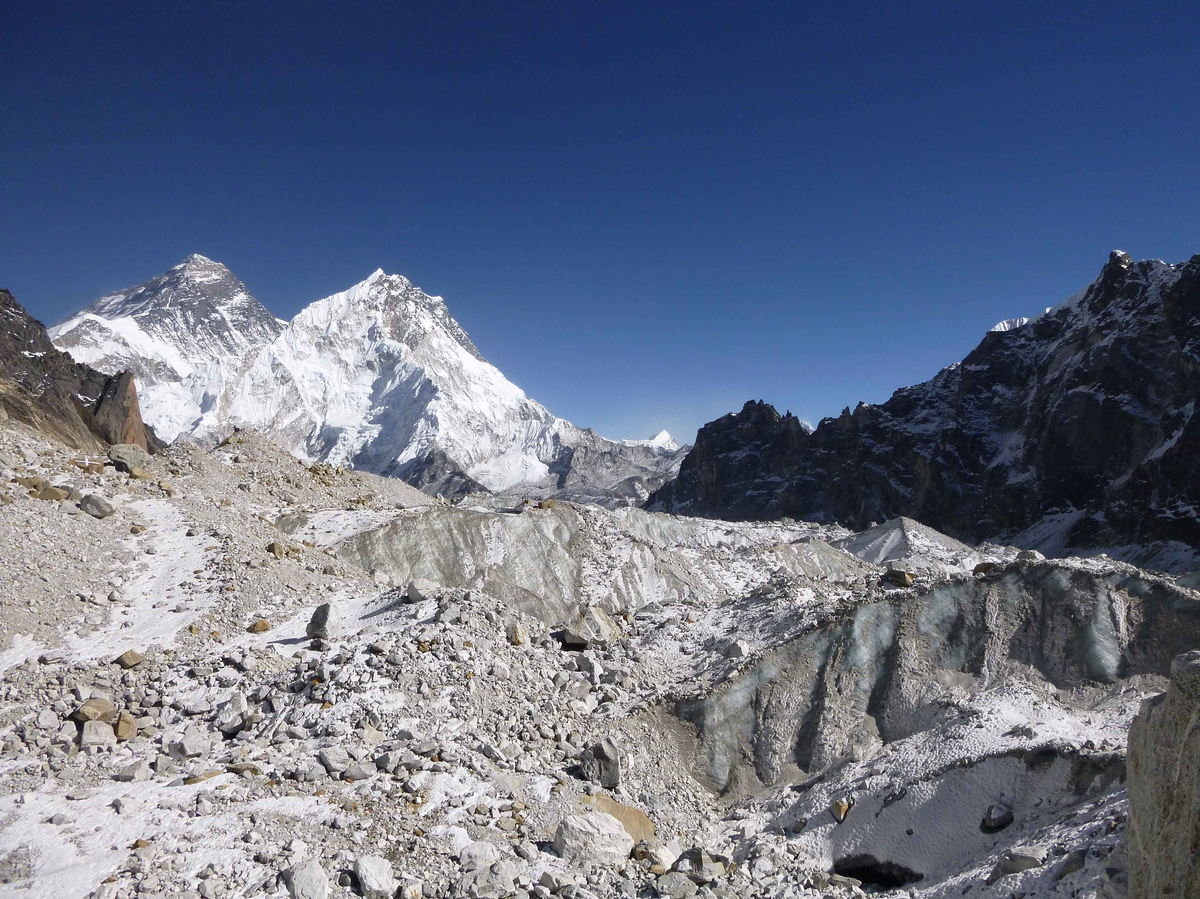 A view of Changri Nup, a typical debris-covered glacier in the Everest region, highlights the glacier's complex surface characteristics, including patches of rock debris and exposed ice cliffs.