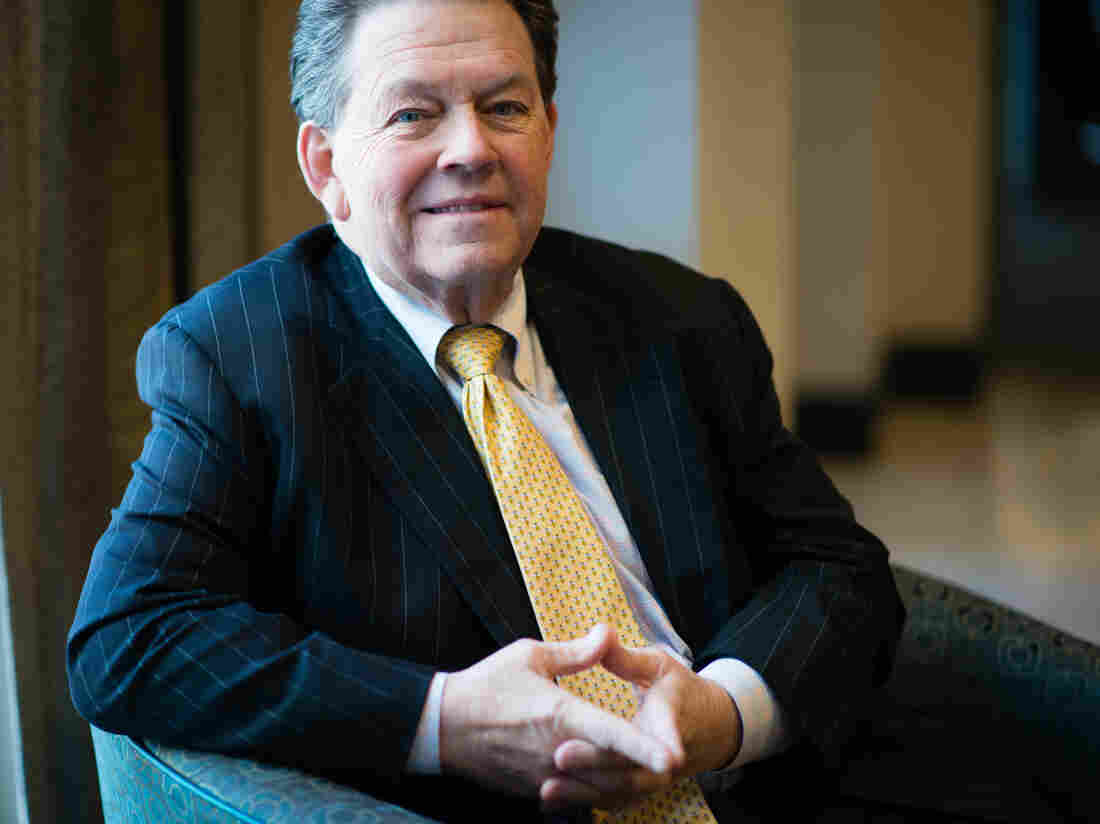 The White House honored economist Art Laffer with the Presidential Medal of Freedom. For decades, Laffer has promoted the idea that tax cuts pay for themselves, against all evidence to the contrary. Sarah L. Voisin/The Washington Post/Getty Images hide caption 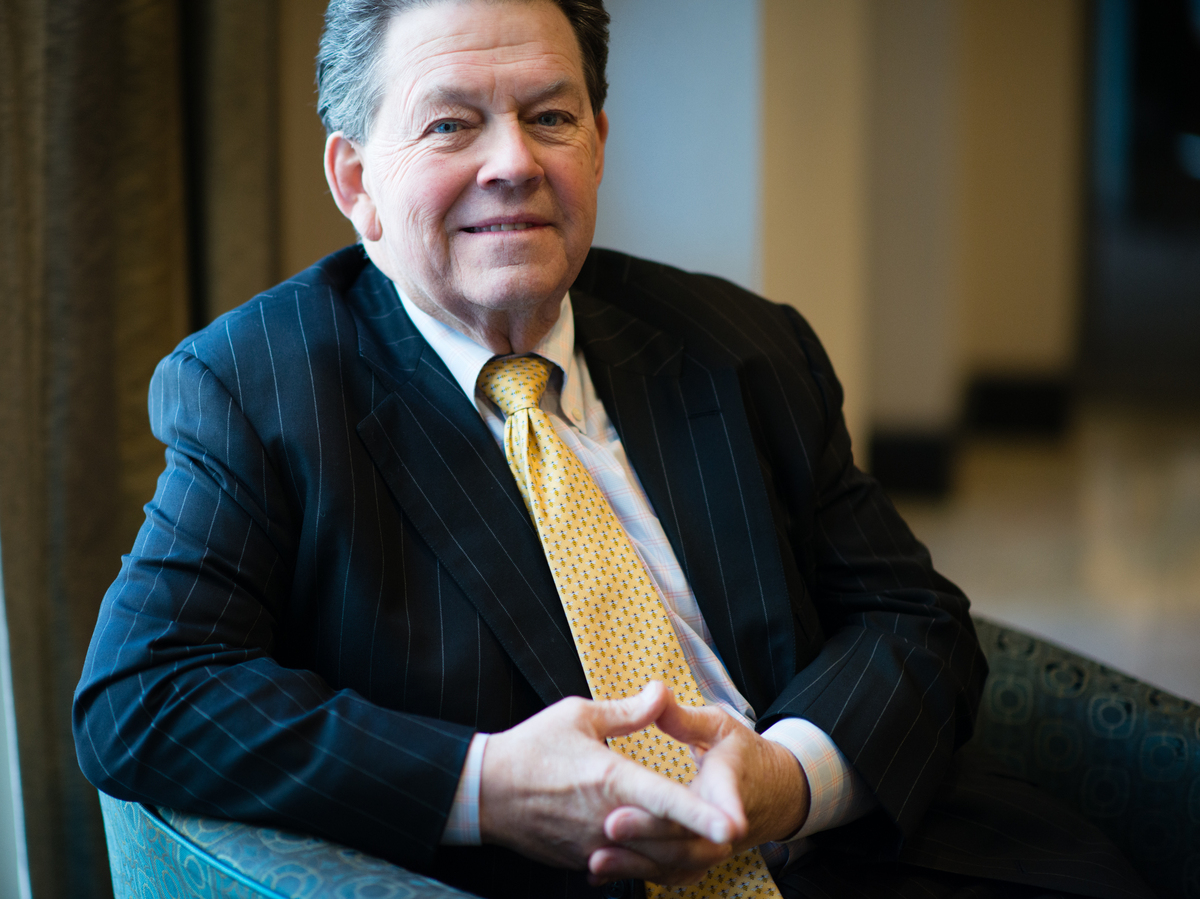 The White House honored economist Art Laffer with the Presidential Medal of Freedom. For decades, Laffer has promoted the idea that tax cuts pay for themselves, against all evidence to the contrary.

Laffer helped popularize the notion that tax cuts pay for themselves through faster economic growth.

It almost never works out in practice. But Laffer and his namesake curve remain darlings of Republican politicians.

Laffer's journey to this moment began 45 years ago with a round of drinks in a Washington cocktail lounge. At the time, Laffer was a young economist at the University of Chicago trying to convince President Ford's deputy chief of staff — a man named Dick Cheney — that lowering taxes could actually boost government revenue.

"Art was trying to explain to Cheney how the Laffer Curve works," recalls Grace-Marie Turner, a journalist who later went to work on Ford's reelection campaign.

Cheney was struggling with the idea, so Laffer resorted to a visual aid.

"He sketched out this Laffer Curve on a paper cocktail napkin at the Hotel Washington, just across the street from the White House," Turner said.

The Ford administration never embraced Laffer's philosophy. But President Reagan did. The namesake curve that Laffer sketched that day at the cocktail lounge was later included in a book by Wall Street Journal editorial writer Jude Wanniski and provided intellectual cover for Reagan's 1981 tax cut.

"Basically, it was a way to have your cake and eat it too," said tax historian Bruce Bartlett, who later worked in the Reagan White House.

In those days, Republicans pushing tax cuts still had to pay lip service to fiscal responsibility.

"So if you wanted to have a tax cut, you had to either pay for it by raising other taxes, cutting spending or come up with some gimmick like the Laffer Curve to simply assert that it wouldn't lose revenue," Bartlett said.

"Prominent academics called this theory 'insanity,' 'totally wacky' and 'completely off the wall,' " Trump said Wednesday during an Oval Office ceremony. "Art would go on to prove them all wrong."

In fact, it was Laffer's rosy forecasts that were proved wrong, time and time again.

Despite Laffer's assurances, the Reagan tax cuts resulted in less revenue. While the economy eventually boomed, deficits soared. And Reagan was ultimately forced to raise taxes repeatedly, offsetting about half the 1981 cuts.

Economists agree that in theory, when tax rates are extremely high, raising them reduces revenue and the government could collect more revenue by lowering rates. But that theoretical level is well above any actual tax rates levied in the U.S. today. Most serious Republican economists dismiss the idea that tax cuts pay for themselves through faster economic growth. Nevertheless, the Laffer Curve has stuck around.

"Once you put those ideas and put them purely in the political sphere, they kind of take on a life of their own," said sociologist Elizabeth Popp Berman of the University at Albany, SUNY. "It doesn't really matter what academic economists think about the legitimacy of this. If it serves a political use, it's going to continue to have some effect."

In 2012, the state of Kansas paid Laffer $75,000 to help then-Gov. Sam Brownback craft his own tax cut. Laffer argued that cutting taxes would do great things for Kansas' economy.

Kansas' 2012 Tax Cut Experiment Could Serve As A Cautionary Tale

It didn't work out that way. State revenues plunged by $600 million the first year. And Kansas lagged neighboring states in job growth.

"You may have heard Art Laffer championing it in the beginning, but his voice was nowhere to be heard when we were undergoing nine consecutive rounds of budget cuts, credit downgrades," said Annie McKay, former executive director of the Kansas Center for Economic Growth. "There wasn't any part of the state budget that wasn't being used to prop up this failed tax experiment."

"Dropping that tax rate to 15% would have a huge impact on the U.S. economy and would have very little impact, if any, on tax revenues from corporations," Laffer told Morning Edition.

Congress slashed the corporate tax rate to 21% — not quite as far as Laffer wanted. And despite a growing economy, corporate tax revenues dropped last year by 26%.

"He's been a huge influence on my thinking," Kudlow said last week. "And I know some people agree and some people may not agree with his views. But I'm a Laffer Curve guy."

"He more than any single living person is responsible for the GOP's cowardly betrayal of its historic commitment to fiscal rectitude," Stockman wrote in an email.

Bartlett, the tax historian, is only slightly more forgiving.

"I think Art has unfortunately done a great deal of harm to this country," he said. "But on the other hand, I'm not sure if it really would have made a lot of difference whether he existed or not. Republicans have been obsessed with cutting taxes for a very long time. And if it wasn't Art Laffer, it would have been somebody else."

A replica of the cocktail napkin on which Laffer first sketched his curve is now on display at the Smithsonian Institution's National Museum of American History. Turner, the journalist who later worked on Ford's reelection campaign, said that the cloth museum piece is not the original.

"This wasn't the kind of establishment that would have had a cloth napkin," she said. "And I don't think anybody knows what happened to that napkin. It probably got picked up and carried off when the beer glasses were sent back to the bar."