Accessibility links
Trump Launches Reelection Bid With Promises Of Greatness And Familiar Grievances The president told supporters that Democrats want to "destroy" the country, turning up the heat on opponents in a speech that mostly picked up where the 2016 campaign left off. 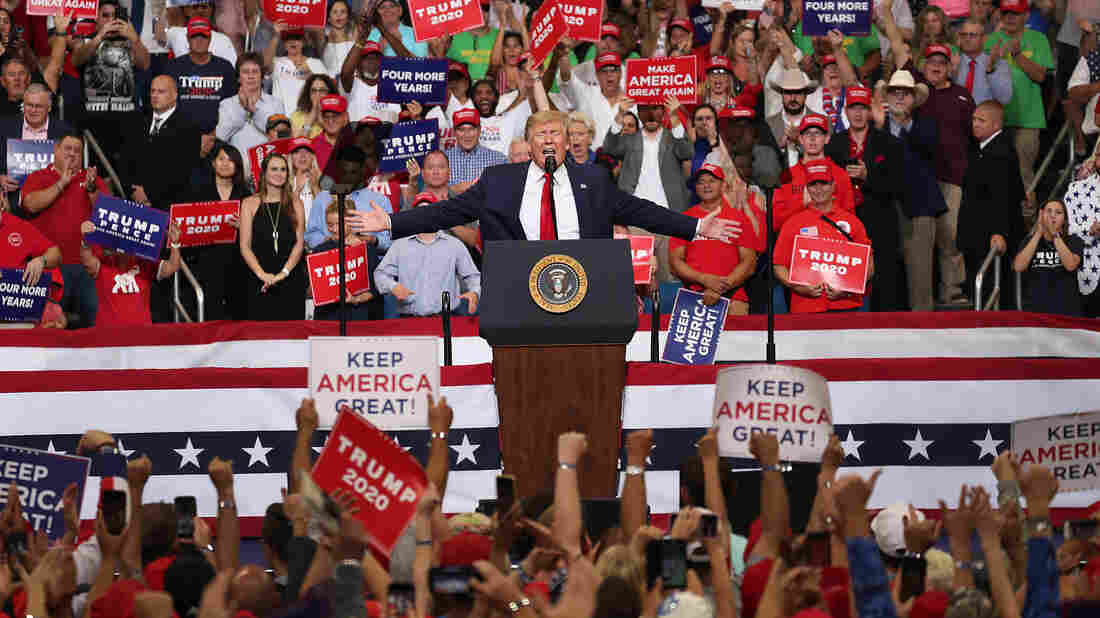 President Trump speaks Tuesday during a rally at the Amway Center in Orlando, Fla., where he announced his candidacy for a second presidential term. President Trump is set to run against a wide-open Democratic field of candidates, which he is trying to define as extreme. Joe Raedle/Getty Images hide caption 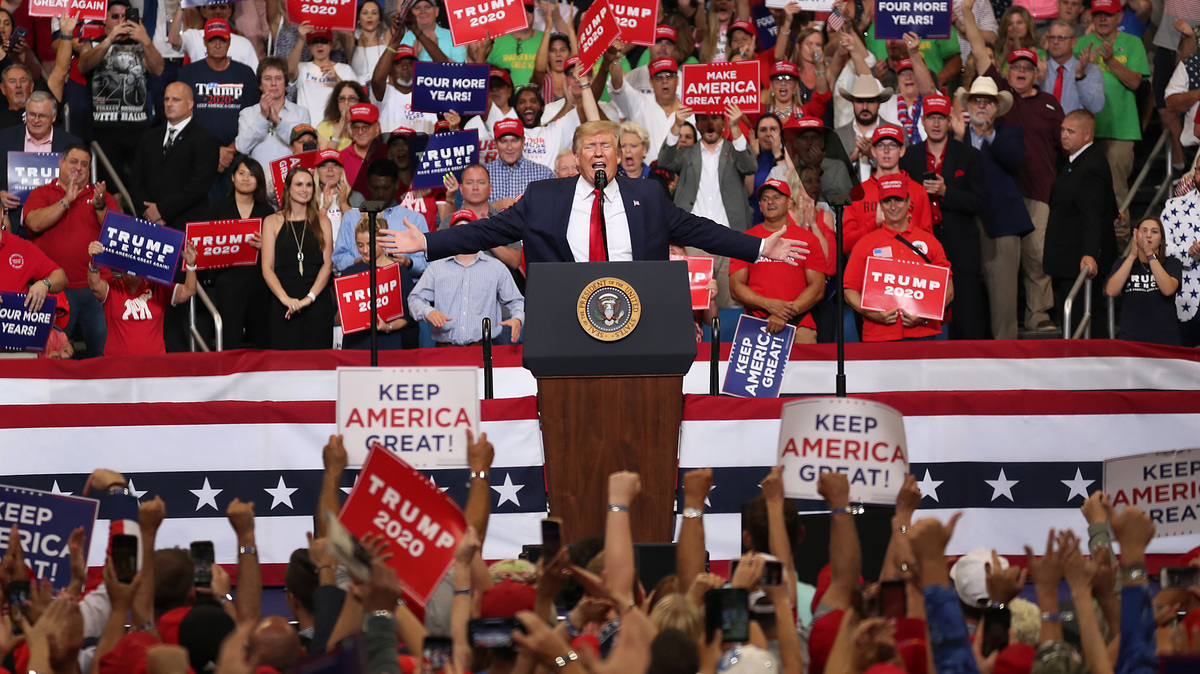 President Trump speaks Tuesday during a rally at the Amway Center in Orlando, Fla., where he announced his candidacy for a second presidential term. President Trump is set to run against a wide-open Democratic field of candidates, which he is trying to define as extreme.

President Trump officially launched his 2020 reelection bid on Tuesday at a massive rally in Orlando, though much of the event picked up where his 2016 campaign left off.

Trump relished in reliving his unlikely victory 2 1/2 years ago over Democratic nominee Hillary Clinton. As the crowd broke into chants of "lock her up," he teased about still trying to search for missing emails on her private server and the possibility his Justice Department could look into prosecuting the former secretary of state.

Trump Set To Officially Launch Reelection Bid, But Hasn't He Been Running All Along?

Trump railed against the media, calling reporters in the room "fake news" amid jeers of "CNN sucks!" from the crowd.

And Trump blasted former special counsel Robert Mueller's long investigation as a "hoax," claiming falsely that it cleared him of any collusion or obstruction.

The speech was full of grievances, occasionally mixed with accomplishments, which was pure Trump — far from the optimistic tone most presidents typically take when announcing their reelection bids. It further showed how little impulse Trump has to move from a divisive, base-driven approach that brought him victory in 2016. It featured more complaints against his critics than concrete promises, and only near the end did he push the success of the economy, which most GOP strategists would rather he focus on heavily, rather than more controversial issues like immigration or continuing to talk about the Mueller inquiry.

But Trump argued that his own anger and that of his biggest backers who regularly pack his rallies is completely justified.

"They tried to erase your vote, your legacy of the greatest campaign and the greatest election probably in the history of our country," Trump said to cheers, painting both himself and his supporters as the victims of Democratic investigations run amok.

Trump's potential 2020 Democratic rivals — who will take the stage next week in their first two-night debate — would argue it's his campaign that has been fueled by those same emotions that the president is pinning on them, as his supporters chanted "Build that wall!" and he threatened on Tuesday to deport "millions" of immigrants in the U.S. illegally as early as next week.

The president called for any persons seeking to immigrate to the U.S. do so on the basis of merit, and he accused Democrats of not being supportive of border patrol agents and Immigration and Customs Enforcement, an agency that many Democrats have called to abolish.

"The Democrat agenda of open borders is morally reprehensible," Trump said. "It's the greatest betrayal of the American middle class, and frankly American life, our country has seen as a whole."

Trump did point to one of the most tangible and far-reaching accomplishments he has had as president — filling the federal courts with conservative judges who may reshape American jurisprudence for decades. Most notably, there are the two Supreme Court justices he successfully appointed, Neil Gorsuch and Brett Kavanaugh.

Trump reflected on Kavanaugh's testy confirmation amid allegations of sexual assault when he was a teenager, which Kavanaugh denied, as evidence the Democrats would stymie every move he made.

"Just imagine what this angry, left-wing mob would do if they were in charge of this country," Trump mused. 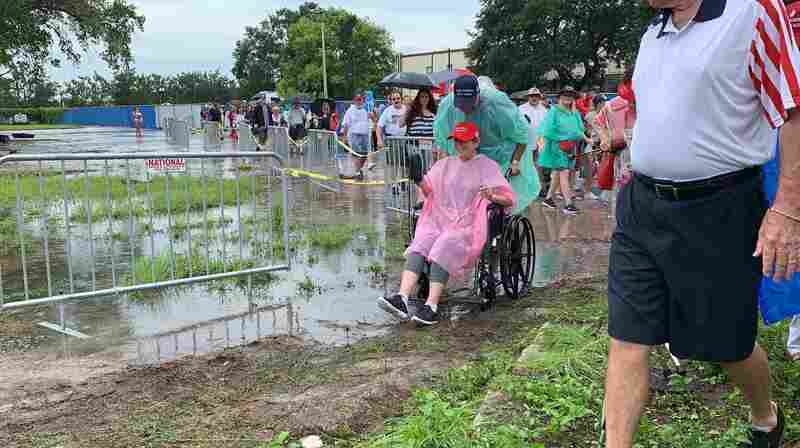 A massive downpour hit as attendees were lining up for President Trump's campaign rally at the Amway Center in Orlando, Fla. It didn't deter many people, but did cause muddy conditions outside the arena. Tamara Keith/NPR hide caption

Along with Vice President Pence's introduction, Trump's remarks hammered home what they believe is their most persuasive issue — convince voters that Democrats' far-reaching progressive agenda is akin to socialism and should be roundly rejected.

"A vote for any Democrat in 2020 is a vote for the rise of radical socialism and the destruction of the American dream," Trump proclaimed.

Trump didn't mention most of the 23 men and women seeking the Democratic nomination, but two who have led most early polls did get a passing mention.

When talking about the Obama administration and its approach to Chinese trade policy, he slammed both the former president and former Vice President Joe Biden and later referred to Biden by his personalized nickname, "Sleepy Joe." Trump also assailed "crazy" Vermont Sen. Bernie Sanders and his "socialist takeover of government health care." Sanders supports a "Medicare for All" program that would replace the private health insurance industry.

Playing to the crowd

Trump polled the audience about whether he should keep the "Make America Great Again" slogan, now famously adorned on most of the red hats that peppered the arena, or switch to "Keep America Great," given that he believes he has accomplished much of what he set out to do in order to return the country to what he sees as "greatness."

The Amway Center was packed to its capacity of 20,000 — which Trump campaign manager Brad Parscale said was their largest indoor rally ever — with many people lining up hours ahead of time to get a seat, even withstanding heavy rains.

Supporters like Gene Huber of West Palm Beach, Fla., were undeterred by inclement weather. He was in line to attend his 16th rally after going up on stage to give Trump a hug at the first rally after his inauguration, which served as another unofficial launch for his bid for a second term back in February 2017. 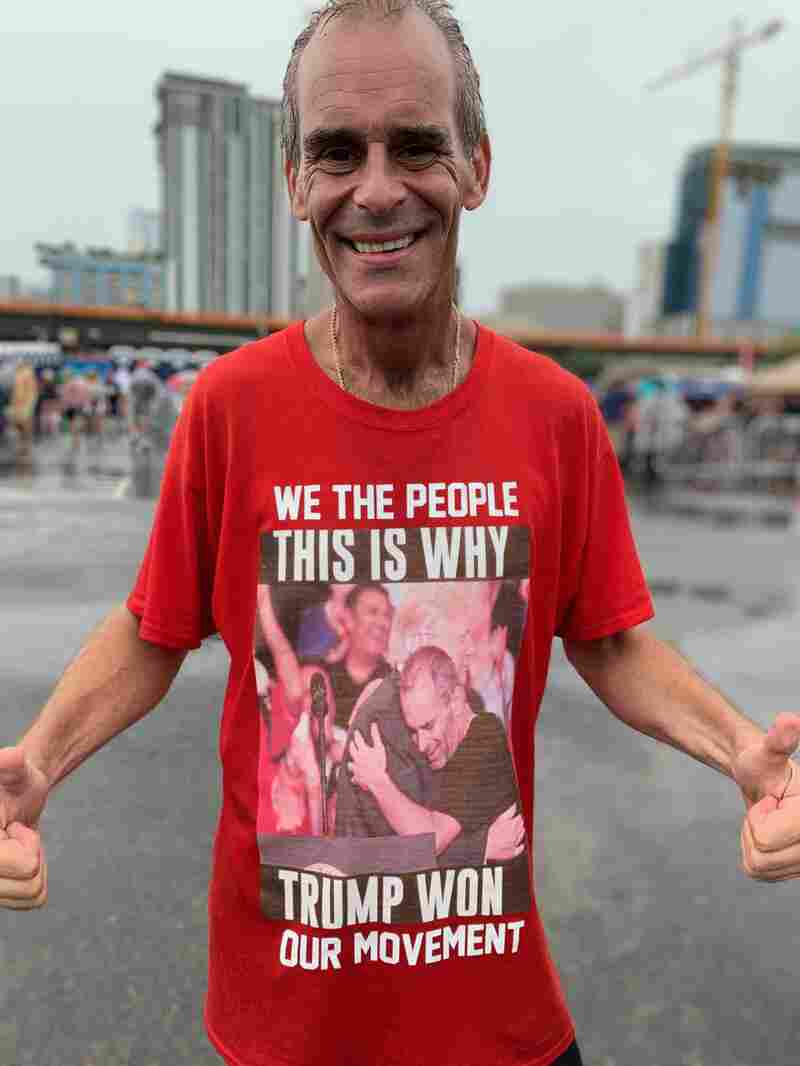 Gene Huber of West Palm Beach, Fla., was attending his 16th Trump rally and wore a shirt depicting one rally he attended where President Trump called him up on stage and gave him a hug. He says he's writing a book about Trump. Tamara Keith/NPR hide caption

"Every rally's the same, but it's better accomplishments that he does for us" that Trump lays out each time, Huber said.

Karen Colby, who had attended a 2016 campaign rally, also stayed in the queue to see the president.

"This is more exciting because he's going to announce his reelection. It's historic," she said. "He's done things nobody else has. He's honored his word. That means a lot."