Accessibility links
Hope Hicks Testified On Obstruction Allegations Before House Judiciary The former Trump aide's appearance before the Judiciary Committee is the first time an official from the White House agreed to show up. But Democrats said she declined to answer many questions. 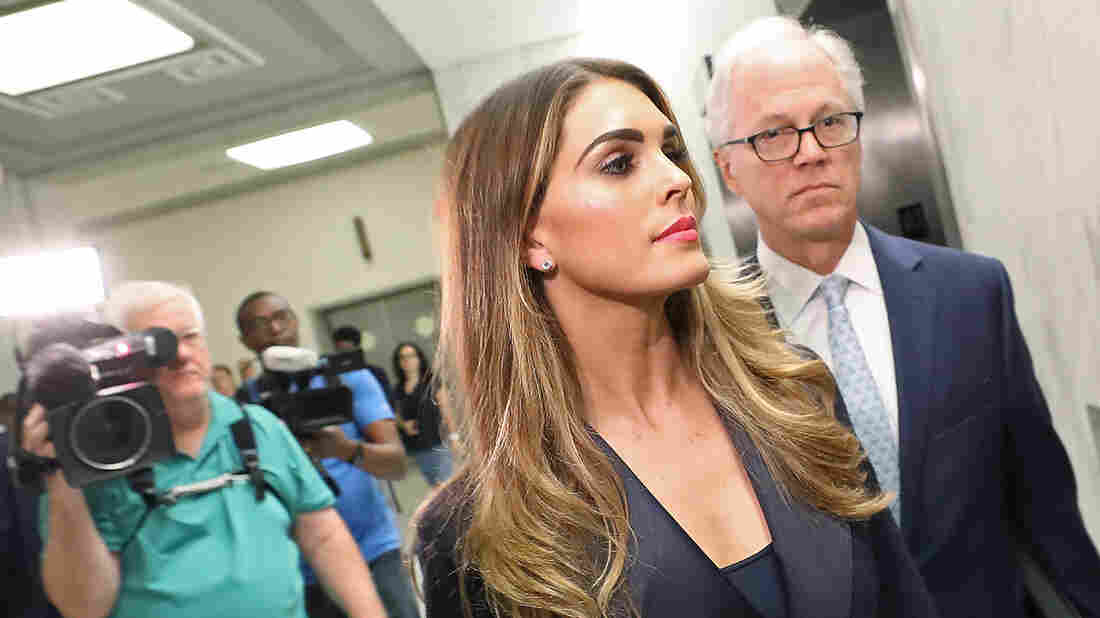 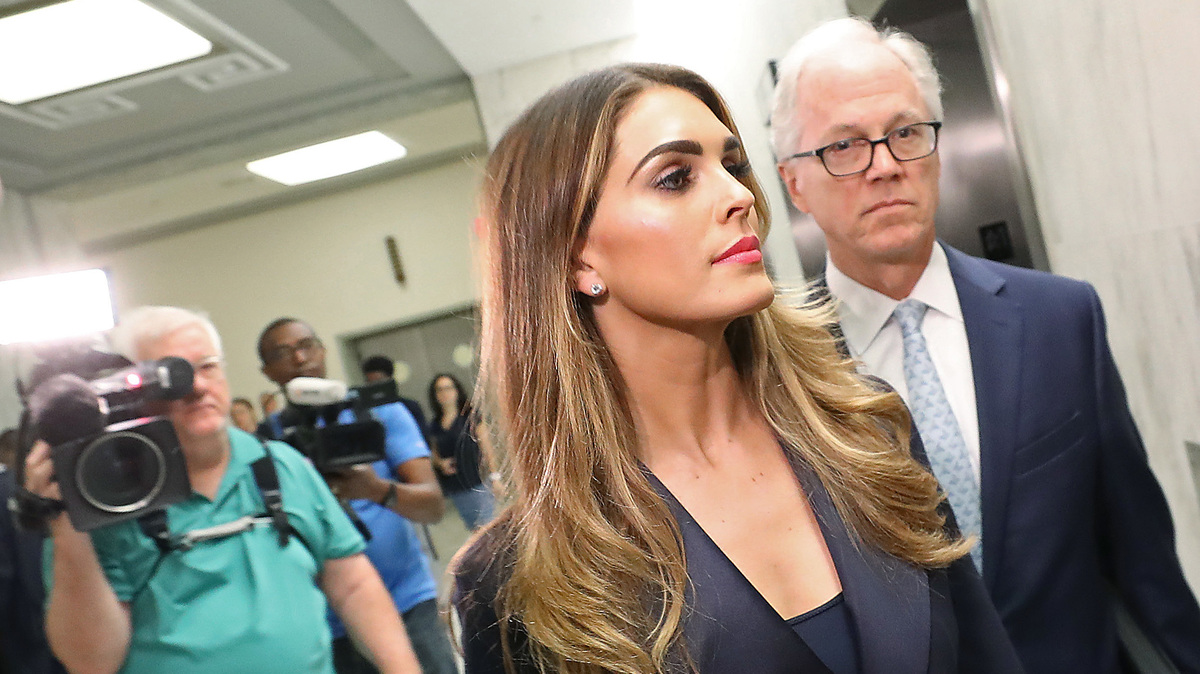 Former White House communications director Hope Hicks declined to answer questions related to her time in the Trump administration during her closed-door testimony on Capitol Hill Wednesday, frustrating Democrats and leading some to say they will go to court to compel her testimony.

Hicks, a close adviser to Trump during the campaign and in the White House, is the first person from the president's inner circle to testify before the House Judiciary Committee as it looks into issues stemming from special counsel Robert Mueller's investigation. Democrats are particularly interested in asking her about several episodes detailed in Mueller's report related to obstruction of justice.

But they have struggled to get answers. White House lawyers, who accompanied Hicks to the interview along with her personal counsel, have objected to questions related to her work in the administration.

"There's a whole bunch of lawyers in there," Rep. David Cicilline, D-R.I., said during a quick break from the meeting. "She's staffed up with many lawyers — her own lawyers, White House counsel lawyers — all there to make sure that she follows White House directions to not share information, to prevent Congress from conducting its oversight."

Hicks' appearance before the House Judiciary Committee comes after weeks of angling by Democrats who have wanted an inside look into allegations that the president obstructed justice in the investigation of Russian interference in the 2016 election. The Trump administration has cited executive privilege in blocking access to other testimony and documents.

Hicks is the first senior administration official cited frequently in special counsel Robert Mueller's report to testify before the committee.

Her name is peppered throughout Mueller's report. She was in Trump's inner circle at key moments, including the firing of then-FBI Director James Comey and Trump's statement on the 2016 Trump Tower meeting between top campaign officials and Russians who had offered damaging information on Hillary Clinton.

"They were unhappy with result so they want a Do Over. Very unfair & costly to her," Trump tweeted.

Battle of the branches of government

The White House has invoked executive privilege to block Congress from getting Mueller's complete, unredacted report. The White House also instructed former White House counsel Don McGahn not to appear before Congress and barred him from handing over documents.

In keeping with that thinking, White House counsel Pat Cipollone said Tuesday that Hicks is "absolutely immune" from answering questions about her work for the president.

In a letter to House Judiciary Chairman Jerry Nadler, D-N.Y., Cipollone said, "Because of this constitutional immunity, and in order to protect the prerogatives of the Office of the President, the President has directed Ms. Hicks not to answer questions before the Committee relating to the time of her service as a senior adviser to the President."

Why Is Justin Amash Willing To Go Against His Own Party On Impeachment?

Cipollone added that White House counsel would accompany Hicks as she testifies "to preserve the President's ability to assert executive privilege" concerning the presidential transition. Democrats say they have done that during questioning on Wednesday but reject the White House's reasoning.

"There's no such thing as absolute immunity," Cicilline, the Rhode Island Democrat, said. "It's just an ongoing effort by the president of the United States to prevent the American people from knowing the full truth."

Cicilline and other Democrats have said the next logical step is litigation to compel Hicks to answer questions.

Republicans, on the other hand, view the Hicks interview as an effort by Democrats to keep the Russia investigation and Mueller's report in the news.

"They seem to be bound and determined to find something to keep the story alive about the president getting impeached and this is just kind of the latest thing to keep it out there in the press," Ohio Republican Steve Chabot said. "I think this is a complete waste of time."

Hicks was subpoenaed by the House Judiciary Committee in May. The White House instructed her to defy the subpoena, but she turned over some documents relating to her work on the presidential campaign.

After the Russia probe ended, Mueller did not conclude that Trump committed a crime, but neither did he exonerate him. He told Congress last month that if his office "had had confidence that the president clearly did not commit a crime we would have said so."

Nadler said a transcript of Hicks' Wednesday testimony will be made public.

Wednesday's testimony is not the first time Hicks has appeared before Congress. In February 2018, she declined to answer questions about her time at the White House or during the transition.

Hicks had been Trump's longest serving aid when her resignation was announced by the White House a day after her appearance on Capitol Hill. At the time, the president described her as "as smart and thoughtful as they come, a truly great person."

A former teen model, Hicks was brought into Trump's orbit after impressing Ivanka Trump by promoting her clothing line at a New York public relations firm.