Accessibility links
Alabama's Africatown Hopes For Revival After Slave Ship Discovery The Clotilda was discovered last month in the Mobile River, bringing new attention to a small community founded by African captives who were brought to the U.S. on the ship. 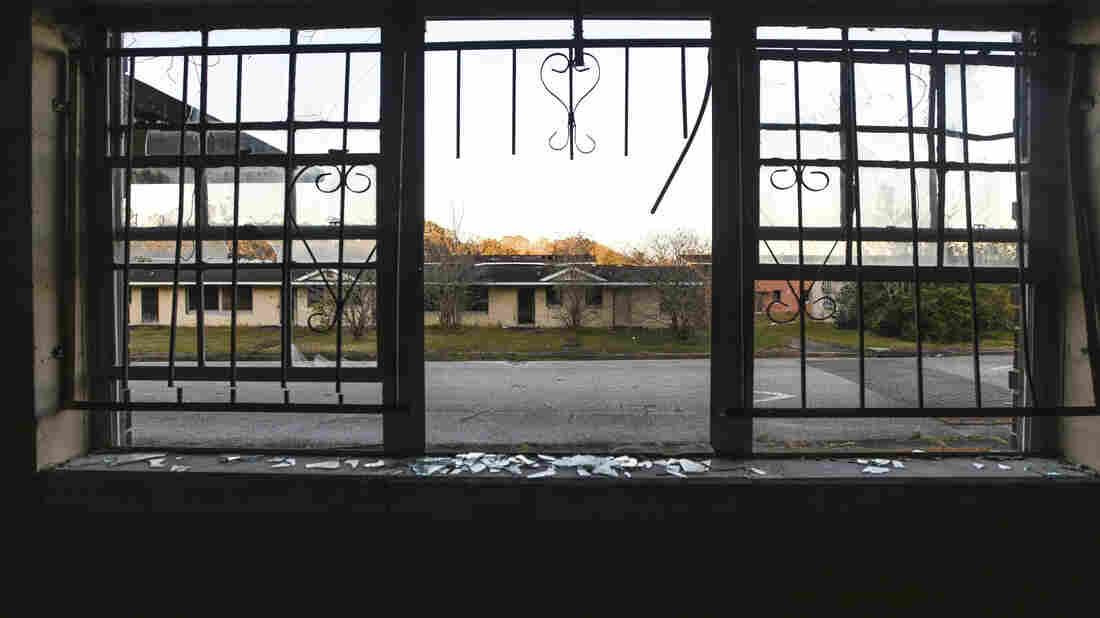 A housing project stands abandoned in the Africatown community in Mobile, Ala. Julie Bennett/AP hide caption 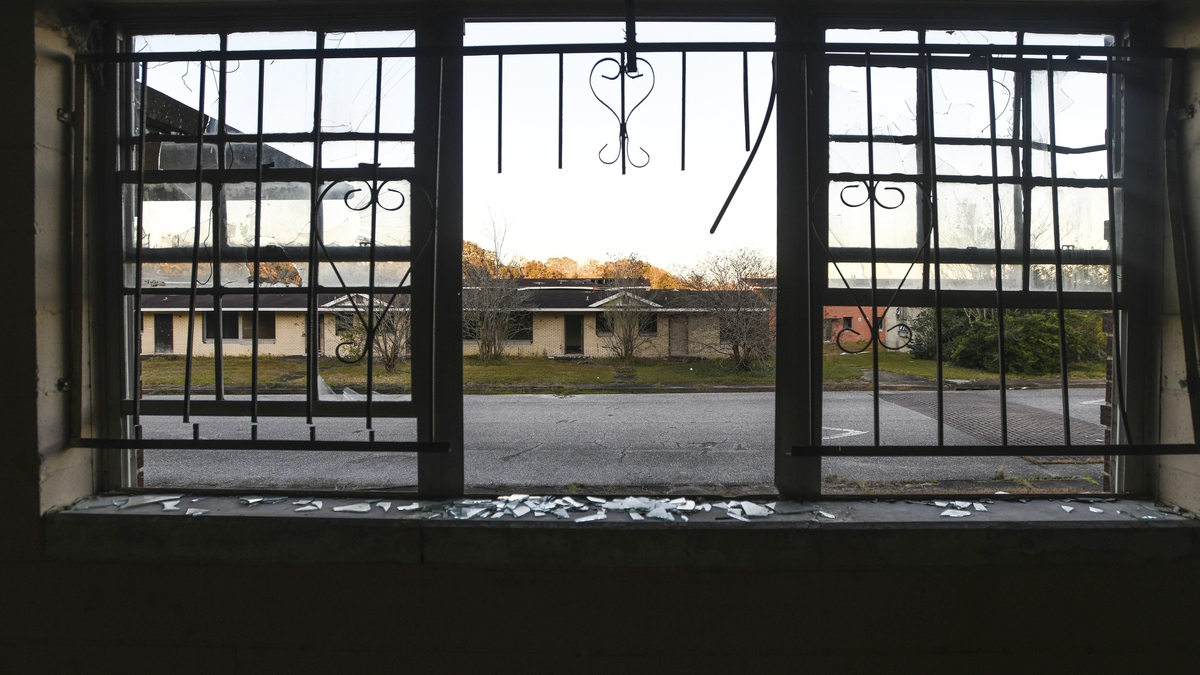 A housing project stands abandoned in the Africatown community in Mobile, Ala.

The recent discovery of the remains of the last slave ship to the United States is bringing hope of revival to Africatown. It's a small community in Mobile, Ala., founded by African captives brought on the schooner Clotilda, thought to have arrived sometime in 1859 or 1860.

Lorna Woods' great-great-grandfather, Charlie Lewis, was brought to Mobile on the Clotilda. Now she tells his story as a volunteer with the local history museum.

"I tell people ... they didn't come here as free men; they came in chains," she says, standing on the downtown corner that was once the city's slave market.

Woods holds up the rusty shackles she found under an old box spring in her grandmother's house.

"This wasn't anything nice," she says. "These are the slave chains that were on their legs and hands."

Woods says for a long time, mostly out of fear, her ancestors kept the story of the Clotilda closely guarded. She learned about it sitting on her grandmother's front porch in Africatown — a community just north of downtown settled by the West Africans smuggled here on the Clotilda.

"They built that little town from just about nothing — just from the bushes and trees they cut down," says Woods. "They made a place where they could carry on their history from Africa. And their children would be able to see they wasn't lazy ... but they had a lot of pride."

Interest in Africatown has been on the rise since Clotilda survivor Cudjoe Lewis' story was the subject of last year's bestseller Barracoon by Zora Neale Hurston, published after her death. 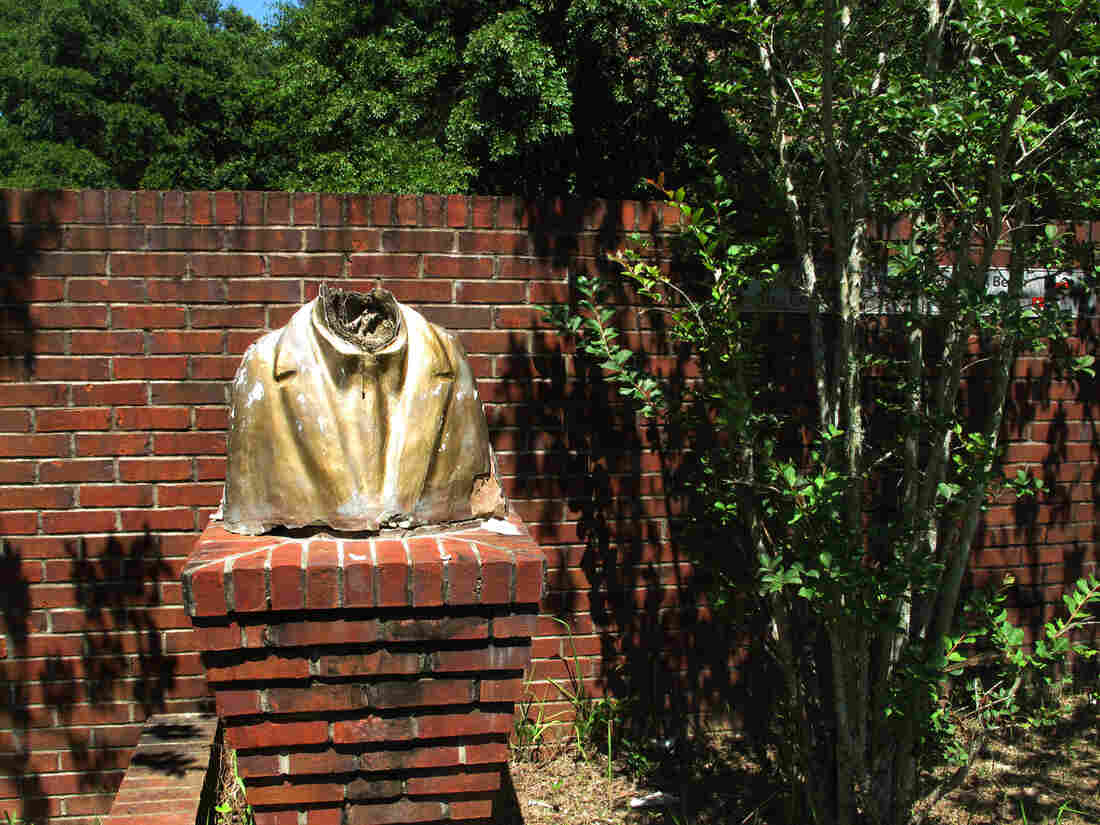 A vandalized bust remains on display at what was the Africatown Welcome Center in Mobile, Ala. Debbie Elliott/NPR hide caption 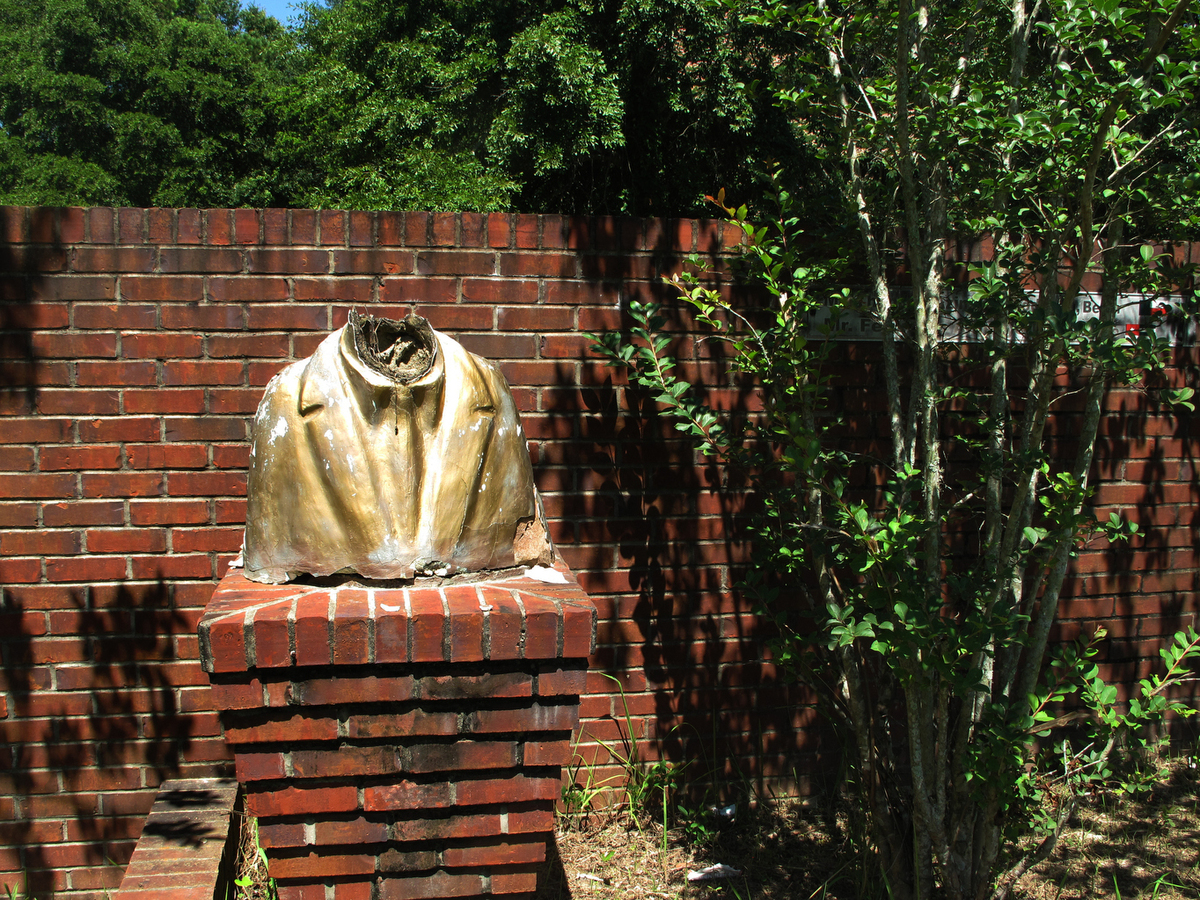 A vandalized bust remains on display at what was the Africatown Welcome Center in Mobile, Ala.

Now the discovery last month of the shipwreck in the Mobile River is bringing new attention.

"The whole story was never told," Woods says. "But by them finding the ship, this gave clarity to the whole story."

Eric Finley has been telling the story as a docent for the Dora Franklin Finley African-American Heritage trail in Mobile.

"It was the result of a rich white plantation owner. ... He made a bet with another white plantation owner that he could bring in 100 illegal individuals," Finley explains as he drives a van along the riverfront where the Clotilda smuggled enslaved Africans more than 50 years after the U.S. had outlawed the slave trade. 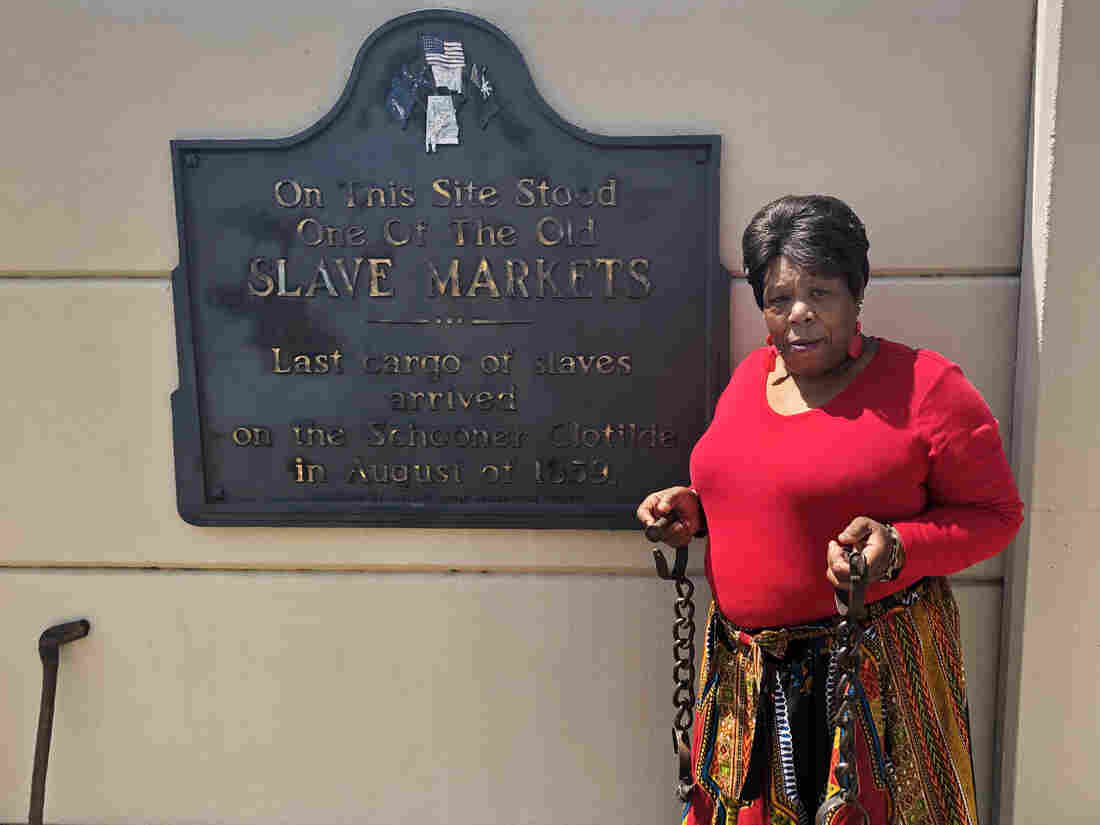 Standing on the downtown corner that was once the city's slave market, Lorna Woods holds up the rusty shackles she found under an old box spring in her grandmother's house. Debbie Elliott/NPR hide caption 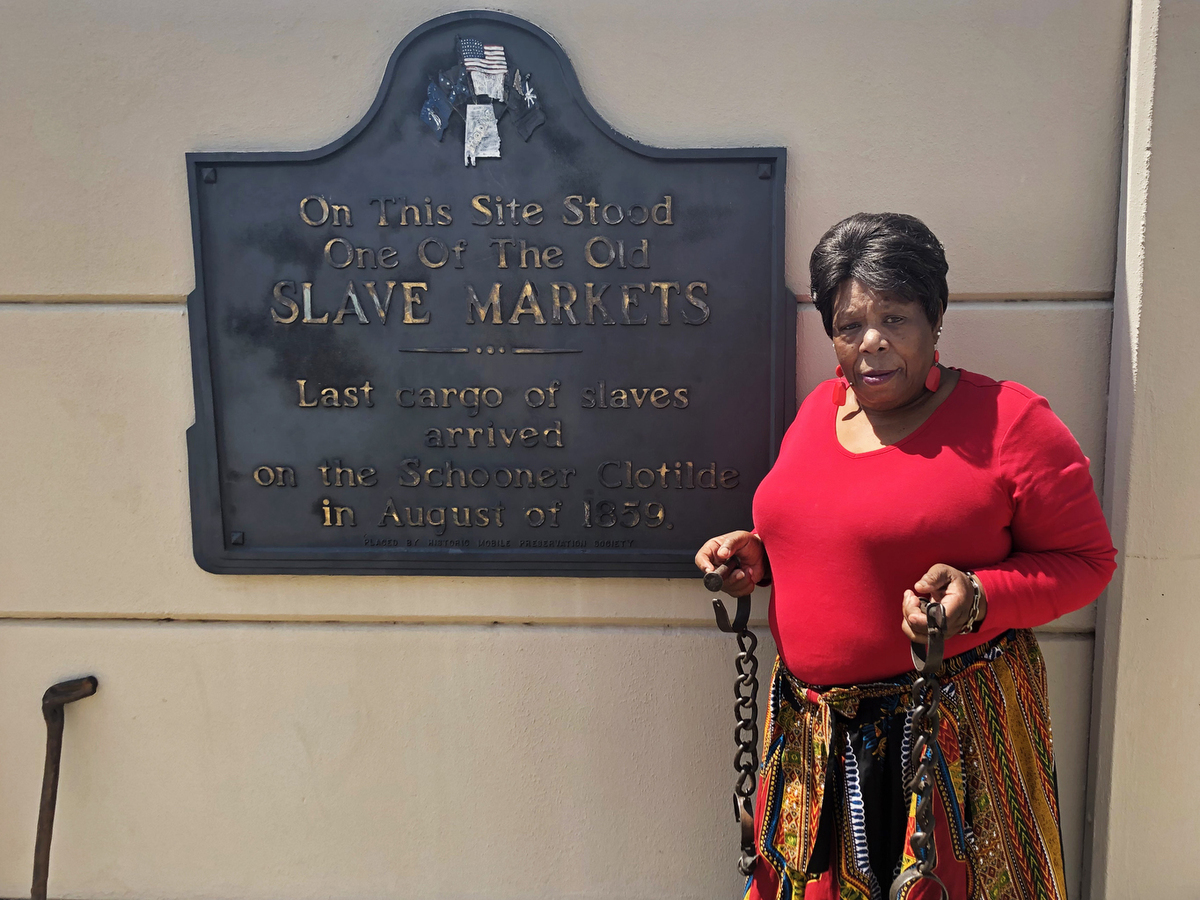 Standing on the downtown corner that was once the city's slave market, Lorna Woods holds up the rusty shackles she found under an old box spring in her grandmother's house.

The story goes the plantation owner, a wealthy shipbuilder and businessman named Timothy Meaher, hired a captain to make the trip to what is now the country of Benin, Africa.

"They head back to the United States," Finley continues the story. "Federal authorities got word that someone was trying to sneak in 100 illegal kidnapped individuals. So they were on the lookout for the Clotilda."

To avoid capture, Finley says, Meaher had the slaves brought inland to hide in the swamp. The Clotilda was scuttled upriver, and set afire to hide any evidence.

He says federal prosecutors opened an investigation but never brought the case to trial with the impending Civil War.

"It is a very difficult story," says Joycelyn Davis, a sixth-generation Clotilda descendant.

"My family was brought over illegally," she says. "On a bet. Naked."

Davis says she heard stories about the Clotilda as she was growing up in Africatown, but didn't really embrace it. "Honestly I was a little ashamed about the story," she admits, noting the role of Africans in the slave trade.

"There was a dispute between two tribes — our own people — and they sold us," Davis says. "That's the shame that I had."

Now Davis says she is working to preserve the history here, and honor the legacy of her ancestor Charlie Lewis, one of the founders of Africatown.

"It's important for me to pass it on," she says. "Do you know what Charlie went through coming over here? Do you know that he survived all of that — persevered, worked hard, they built their own homes, a community, a church, and a school. Off of nothing. All they had was each other."

Today she says there are obstacles to reckoning with the story of the Clotilda.

"We have the old South, where people just don't want to talk about slavery," Davis says.

Africatown is surrounded by a paper mill, chemical plants and oil storage tanks.

It's bordered on three sides by water — including the Mobile River. Residents here have filed a lawsuit over industrial pollution.

Davis crosses the major highway that now cuts through the middle of Africatown to a sloping hillside where sprawling oak trees shade gray stone grave markers.

"One thing that Cudjoe and the other survivors of the Clotilda, they all wanted to go back home to Africa," Davis says. "So the cemetery faces east towards Africa."

Davis says after Emancipation, Meaher would not provide his former slaves passage back to Africa. They continued to work on plantations and at his paper mill to earn enough money to buy the land that became Africatown.

Meaher's descendants still own the surrounding property, and there's a Meaher state park named for the family on Mobile Bay.

"Everything around here belongs to them," she says. "You know so they have been ever present all of my life."

Descendants of Meaher declined to speak about the discovery of the Clotilda. Davis and other descendants of the enslaved Africans say they would like to meet with members of the Meaher family to hear their side of history.

Darron Patterson's great-great-grandfather Pollee Allen was on the Clotilda. Patterson, in his 60s now, has seen Africatown struggle.

"It's not what it used to be," he says. "When I was small and growing up there ... it was a community that was self-contained. We had stores and barber shops and post offices, you know, and gas stations and drugstores."

Over the years, he says, it has seen its share of downtimes. 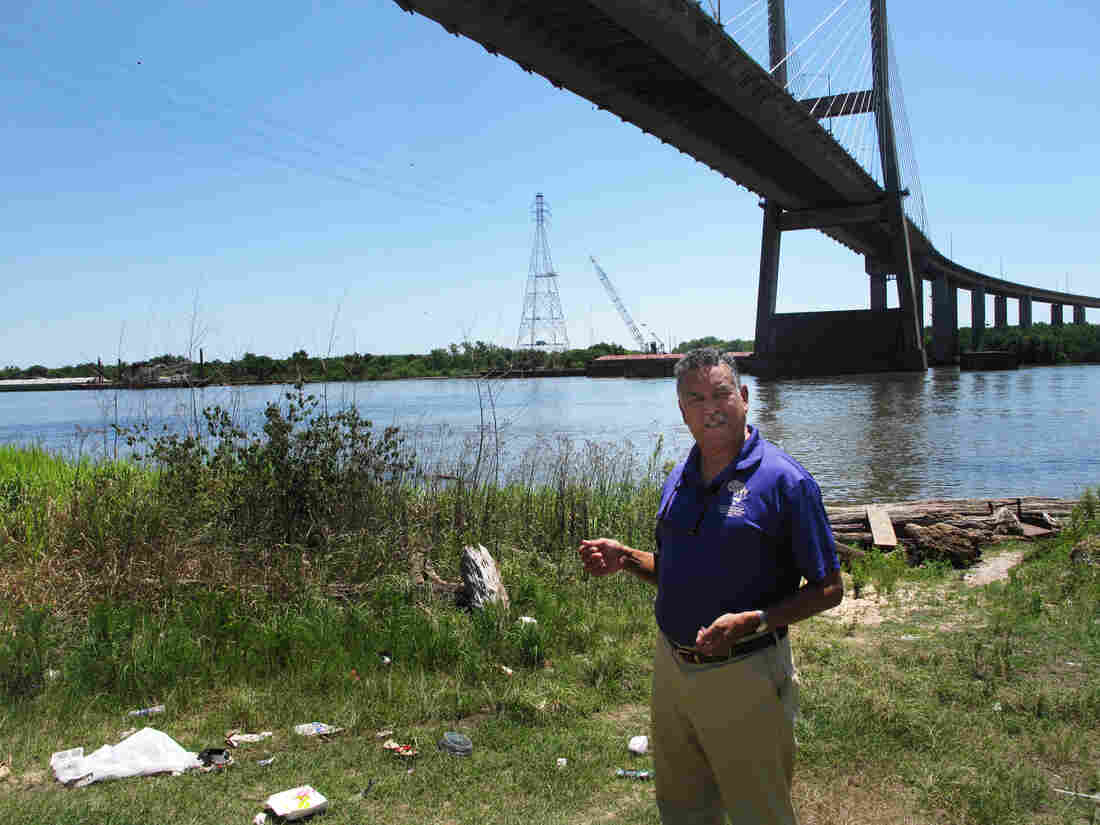 Eric Finley leads tours for the Dora Franklin Finley African-American Heritage trail in Mobile. The riverfront is where the schooner Clotilda smuggled enslaved Africans more than 50 years after the U.S. had outlawed the slave trade. Debbie Elliott/NPR hide caption 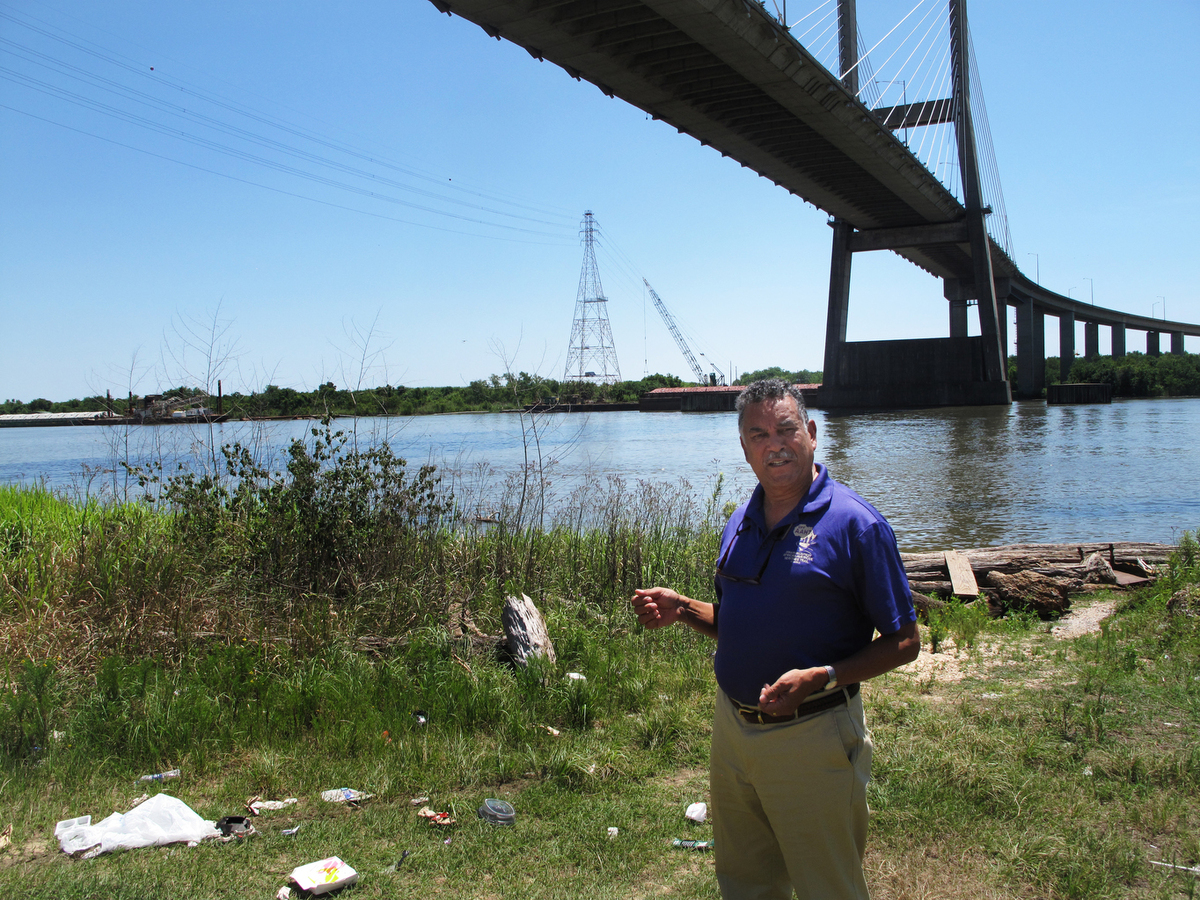 Eric Finley leads tours for the Dora Franklin Finley African-American Heritage trail in Mobile. The riverfront is where the schooner Clotilda smuggled enslaved Africans more than 50 years after the U.S. had outlawed the slave trade.

The commerce is gone now, and you see boarded-up homes and vacant lots in the neighborhood. The population has declined from about 12,000 in the 1960s to under 2,000 today. In 2012, Africatown was listed on the National Register of Historic Places, but little came of the designation.

Now, Patterson is hopeful the blight and neglect will end with the discovery of the ship.

"The pride now that is being regenerated by what's happened with the Clotilda is amazing."

There's talk of redeveloping the town and opening a museum to house a replica of the Clotilda. The state has allocated $3.5 million from its BP oil spill settlement to build an Africatown welcome center. The old one was washed away by Hurricane Katrina in 2005, and the property is overrun with weeds and litter. And the National Park Service is planning a waterfront park in the community.

"What justice now?" he asks. "If there was a lack of evidence against Timothy Meaher then and this boat actually turns out to be the evidence that there were slaves brought here illegally, what do we do now? There has got to be something that happens."

Mobile attorney and city Judge Karlos Finley says descendants may have a case for reparations.

"What the ship does is it takes the story out of the realm of lore," Finley says. "You see prior to the ship being discovered there were people who could argue that, 'Oh, that's just old wives' tales here; that didn't really happen.' " (Karlos Finley and Eric Finley are cousins.)

The shipwreck remains in the murky waters of the Mobile River, under guard now, an "irreplaceable cultural treasure" according to the Alabama Historical Commission.

Clarification: A previous version of this story referred to the slave ship Clotilda as Clotilde, which is a common alternative spelling.

Previously posted June 19: A previous version of this story incorrectly spelled a reference to Darron Patterson's last name as Paterson.