Accessibility links
Capt. 'Sully' Sullenberger Testifies That Boeing 737 Max Was "Fatally Flawed" "Sully" Sullenberger, who landed a plane on the Hudson River in 2009, says he understands how the pilots of two jets that crashed would have been confused as they struggled to control the aircraft. 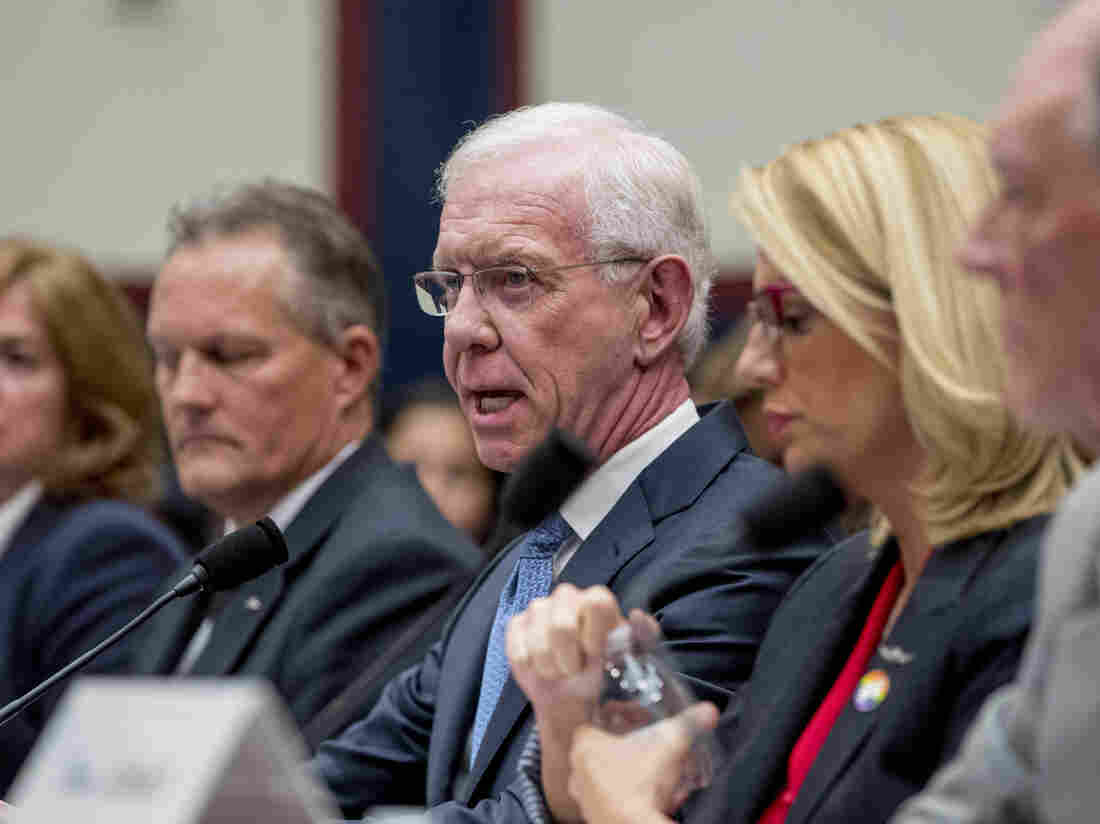 Capt. Chesley "Sully" Sullenberger, accompanied by other pilots and former FAA administrator Randy Babbitt, speaks during a House Committee on Transportation and Infrastructure hearing on the status of the Boeing 737 Max in Washington, D.C. Andrew Harnik/AP hide caption 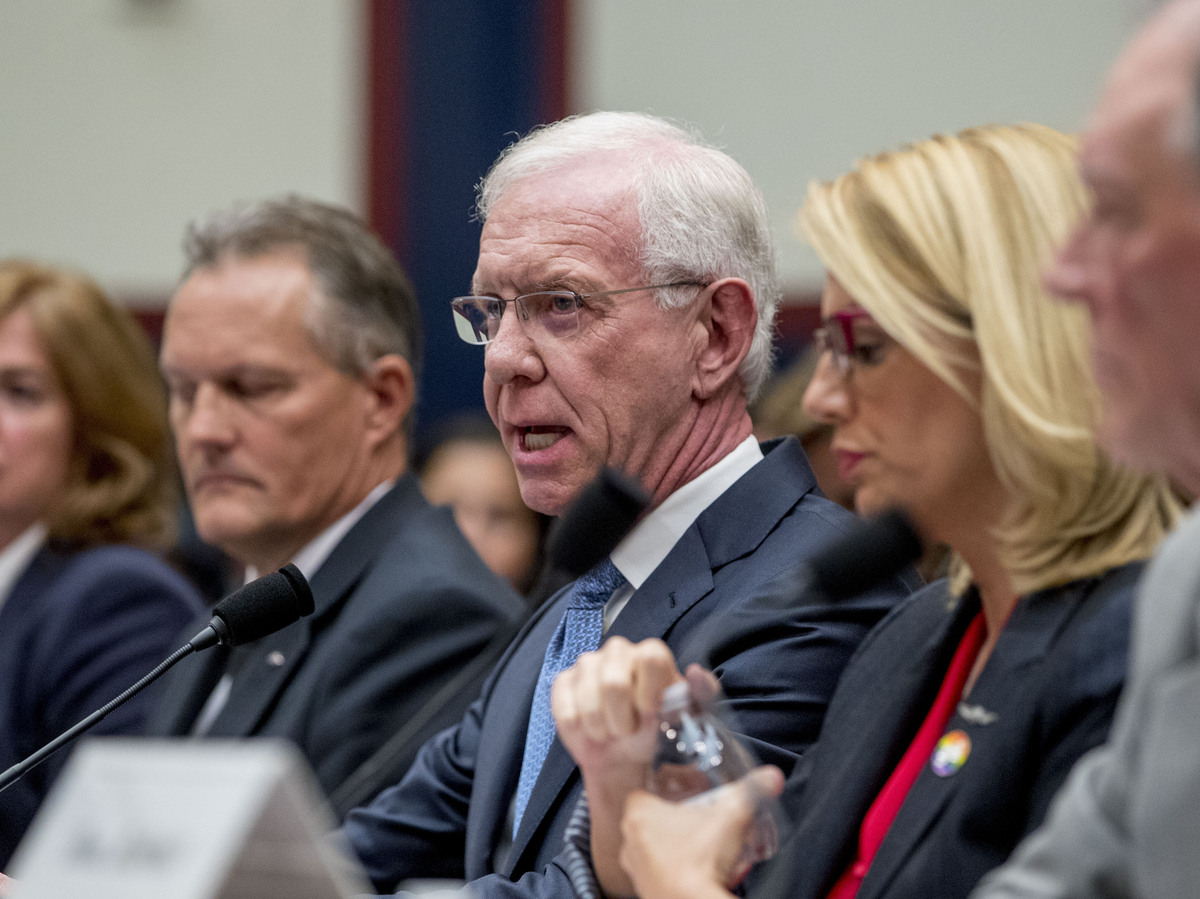 Capt. Chesley "Sully" Sullenberger, accompanied by other pilots and former FAA administrator Randy Babbitt, speaks during a House Committee on Transportation and Infrastructure hearing on the status of the Boeing 737 Max in Washington, D.C.

One of the nation's best known airline pilots is speaking out on the problems with Boeing's 737 Max jetliner. Retired Capt. Chesley "Sully" Sullenberger told a congressional subcommittee Wednesday that an automated flight control system on the 737 Max "was fatally flawed and should never have been approved."

Sullenberger, who safely landed a damaged US Airways jet on the Hudson River in New York in 2009 after a bird strike disabled the engines, says he understands how the pilots of two 737 Max planes that recently crashed would have been confused as they struggled to maintain control of the aircraft, as an automated system erroneously began forcing the planes into nosedives.

"I can tell you firsthand that the startle factor is real and it's huge. It absolutely interferes with one's ability to quickly analyze the crisis and take corrective action," he said.

The House Aviation Subcommittee is investigating the crashes of Boeing 737 Max jets in Indonesia last fall and in Ethiopia in March that killed a total of 346 people. The panel is also examining what role, if any, Boeing's rush to develop the latest version of its popular 737 and the FAA's process of certifying the new model as airworthy may have played in the tragedies.

The planes remain out of service as aviation authorities around the world grounded the planes shortly after the second crash. The three U.S. airlines that flew the Max — Southwest, American and United — have canceled thousands of flights as they have pulled the planes from their schedules through the busy summer months.

Boeing says it has now completed a software fix for the automated system called MCAS, which investigators say appears to be at least partly to blame in the crashes.

"These crashes are demonstrable evidence that our current system of aircraft design and certification failed us," Sullenberger told lawmakers. "The accidents should never have happened."

Daniel Carey, president of the Allied Pilots Association, which represents pilots at American Airlines, noted Boeing's strong safety record generally, but he criticized the aerospace giant for making "many mistakes" in order to reduce costs, while still developing the Max plane so that it would feel as much like the previous version of the 737.

"Boeing designs and engineers and manufacturers superb aircraft," Carey testified. "Unfortunately in the case of the Max, I'll have to agree with the Boeing CEO, they let the traveling public down in a fatal and catastrophic way."

Carey told the committee that the MCAS flight control system, which was designed to prevent an aerodynamic stall, was flawed in that it had a single point of failure without redundancies. In the case of both the Lion Air flight in Indonesia and the Ethiopian Airlines plane, a single angle of attack sensor provided faulty data to the system, so the MCAS forcefully and repeatedly pointed the nose of the plane down when it shouldn't have.

"A huge error of omission was the fact that Boeing failed to disclose the existence of the MCAS system to the pilot community around the world," Carey said. "The final fatal mistake was therefore the absence of robust pilot training in the event of an MCAS failure."

Carey says Boeing's failures have created a "crisis of trust" between the airplane-maker and pilots.

As Boeing prepares to submit its software fix for the MCAS system to the FAA for the agency to conduct test flights and ultimately recertify the plane, which could happen within the next couple of weeks, both Carey and Sullenberger called for more robust pilot training as part of the plan for allowing 737 Max jets to fly passengers again, including experiencing an MCAS system failure while training on a simulator.

Boeing has suggested such training could be accomplished with a one-hour session on a laptop or tablet device. Simulator training was not required for pilots transitioning from the previous "Next Generation" version of the 737 to the Max.

Sullenberger says he recently experienced scenarios similar to those facing the pilots of the doomed Ethiopian and Lion Air jetliners in a simulator and says he understands the difficulties they had trying to maintain control of the planes. "Even knowing what was going to happen, I could see how crews could have run out of time and altitude before they could have solved the problems," he said.

"We should all want pilots to experience these challenging situations for the first time in a simulator, not in flight with passengers and crew on board," Sullenberger told lawmakers, adding that "reading about it on an iPad is not even close to sufficient. Pilots must experience it physically, firsthand."

But there are few 737 Max simulators in existence, and providing such training for thousands of pilots around the world would be costly and logistically problematic.

He and Carey dismissed suggestions that the crashes could not have happened in the U.S., where pilots are required to have a lot of experience and more rigorous training before flying commercial airliners.

"Some (U.S.) crews would have recognized it in time to recover, but some would not have," Carey testified. Sullenberger agreed, saying it's unlikely that more experienced pilots would have had different outcomes, adding, "we shouldn't have to expect pilots to compensate for flawed designs."

"These two recent crashes happened in foreign countries," said Sullenberger. "But if we do not address all the important issues and factors, they can and will happen here."