Accessibility links
Supreme Court Cross Case: Memorial Can Stand On Public Land The high court's conservative majority sided with those advocating for "religious freedom" in a major win for groups like the American Legion. 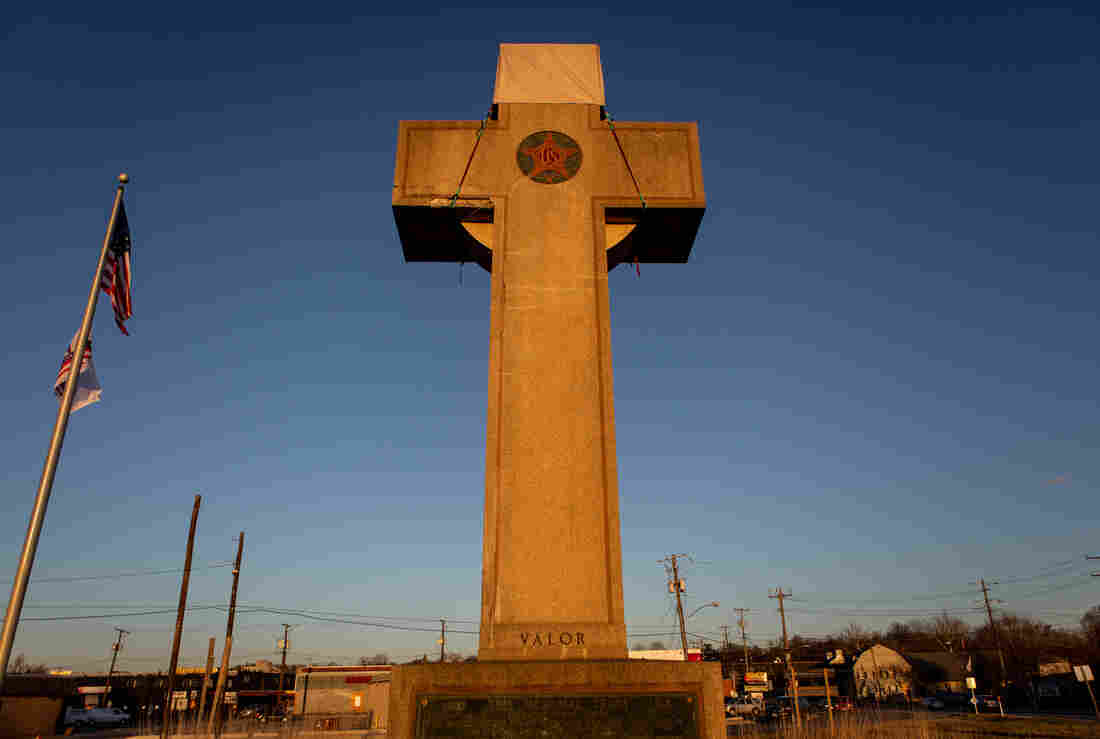 A World War I memorial cross sits in Bladensburg, Md., just outside Washington, D.C. The federal government asked the Supreme Court to rule in favor of the cross. Becky Harlan/NPR hide caption 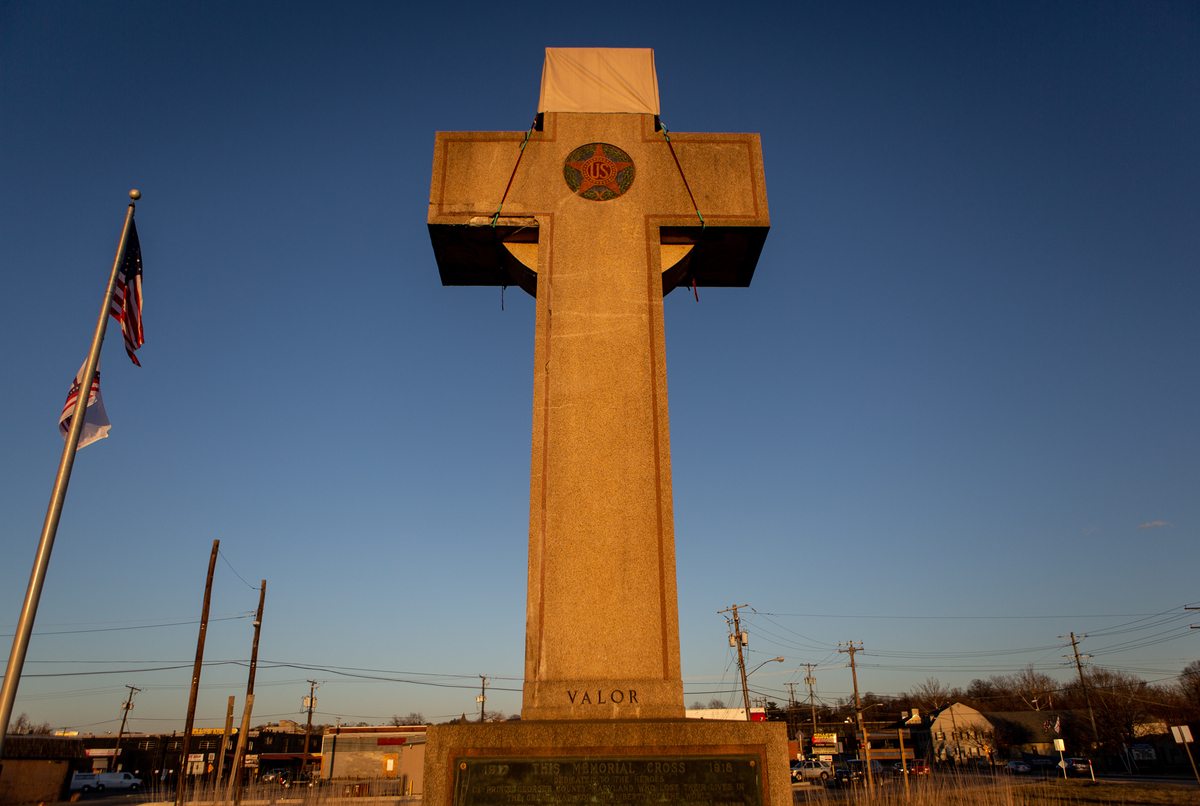 A World War I memorial cross sits in Bladensburg, Md., just outside Washington, D.C. The federal government asked the Supreme Court to rule in favor of the cross.

The U.S. Supreme Court ruled Thursday that a 40-foot World War I memorial cross can stay on public land at a Maryland intersection.

The cross "has become a prominent community landmark, and its removal or radical alteration at this date would be seen by many not as a neutral act but as the manifestation of a hostility toward religion that has no place in our Establishment Clause traditions," wrote Justice Samuel Alito, who penned the majority opinion for the court.

Alito added that contrary to the challengers' intimation, "there is no evidence of discriminatory intent in the selection of the design of the memorial or the decision of a Maryland commission to maintain it. The Religion Clause of the Constitution aims to foster a society in which people of all beliefs can live together harmoniously, and the presence of the Bladensburg Cross on the land where it has stood for so many years is fully consistent with that aim."

The decision was 7 to 2, but it had multiple parts and not all of the seven agreed on every aspect. The decision reverses a lower-court ruling that said the memorial is unconstitutional, because it is on public land and maintained at taxpayer expense. The high court's ruling is a major victory for religious groups and the American Legion, which warned that if this cross had to be moved, so, too, would other crosses that serve as war memorials.

In his opinion for the court, Alito said that the cross had essentially become secular. He invoked the history of World War I memorials. He pointed to the rows and rows of crosses that marked the graves of U.S. soldiers across Europe and said that established in people's minds the idea of crosses as war memorials back then.

Justice Ruth Bader Ginsburg, in dissent, disagreed with Alito's history. She noted that it's clear what the purpose and meaning of the cross was from the start — it was religious. She argued Americans knew what it meant then and know what it means now.

"Decades ago," Ginsburg wrote, "this Court recognized that the Establishment Clause of the First Amendment to the Constitution demands governmental neutrality among religious faiths, and between religion and non-religion. ... Numerous times since, the Court has reaffirmed the Constitution's commitment to neutrality. Today the Court erodes that neutrality commitment, diminishing precedent designed to preserve individual liberty and civic harmony in favor of a 'presumption of constitutionality for longstanding monuments, symbols, and practices.' "

"The Latin cross," she said, "is the foremost symbol of the Christian faith, embodying the 'central theological claim of Christianity: that the son of God died on the cross, that he rose from the dead, and that his death and resurrection offer the possibility of eternal life.' ... Precisely because the cross symbolizes these sectarian beliefs, it is a common marker for the graves of Christian soldiers. For the same reason, using the cross as a war memorial does not transform it into a secular symbol, as the Courts of Appeals have uniformly recognized."

Joining Alito's opinion were the court's four other conservative justices, though two of them — Justices Clarence Thomas and Neil Gorsuch — only signed on to the outcome. Thomas restated his view that the Constitution's clause banning the establishment of religion does not apply to the states, and Gorsuch said he would have dismissed the challenge to the cross because, in his view, the objectors didn't have legal standing to sue.

The decision could have sweeping implications in terms of symbols, like crosses and the Ten Commandments that have long been in place. Those that are already there are unlikely to be removed, but putting up new crosses or other religious symbols on public property very likely would not stand under Thursday's ruling.

Reaction to the court's ruling varied. Though most experts saw the decision as narrow, some also saw landmines in the footnotes that could lead to far broader decisions in cases involving religious practices in the public sphere and religious involvement with the government.

Michael McConnell, director of the Constitutional Law Center at Stanford Law School, saw the case as mainly about symbols. "What it's saying is that symbols that have been around for a long time will be upheld," but "no one should think that necessarily applies to new symbols."

David Strauss, co-editor of the Supreme Court Review at the University of Chicago agreed, but said that there "are intimations" in the court's opinions that "a majority is willing to go quite a bit further in allowing the government to signal its support for religion in various ways."

He said that there are suggestions in the decision that if a practice was acceptable at the time the Constitution was written, those practices would be acceptable today.

"If that is what the court means," Strauss said, "that would be a big change, because the country is a lot more religiously diverse now than it was then" and "turning back the clock that way... would be a big deal."

University of Pennsylvania law professor Marci Hamilton, who, like McConnell and Strauss, has written extensively about the the religious clauses of the Constitution, pointed to a full-page footnote in the Alito opinion categorizing the different kinds of religion cases that the Supreme Court has been faced with over the last 70 years.

The footnote, she suggested, is loaded with landmines for the future expansion of religion in the public sphere, from prayer in public schools to "church involvement in governmental decision-making."

The implication, she said, is "that maybe it's OK to have churches making governmental decisions."

University of Virginia law professor Douglas Laycock, though, was relieved by what he viewed as a limited opinion. He filed a brief opposing the Maryland memorial on behalf of Christian groups and the Jewish War Veterans, but he said that "From a true state separation perspective, this could have been much worse."

The Trump administration, he noted, had argued that "'the cross is a universal symbol of sacrifice,' which is just nonsense. And the court didn't go there. So there's good news here."

How the cross got there

The concrete cross at the center of the court's decision is located in the middle of a busy median strip and directly across the street from a large pawnshop in Bladensburg, Md.

It was erected nearly 100 years ago when bereaved mothers in Bladensburg decided to build a World War I memorial to honor their fallen sons. When they ran out of money, the American Legion took over the project. But by the 1930s, a local parks commission had taken over the memorial and the responsibility for its maintenance.

Today, the cross is more grungy than grand. The concrete is crumbling; a canvas tarp covers the top, and without the $100,000 that the parks commission has budgeted for repair, the monument looks like it may not be long for this world.

The American Humanist Association challenged the placement of the cross, contending that "there is no meaning to the Latin cross, other than Christianity."

A federal appeals court agreed, declaring that its placement violated the Constitution's ban on establishment of religion. The appeals court ruled that the cross should be moved to a private location and funded without taxpayer money.

Now, the Supreme Court has reversed that ruling.