Accessibility links
Review: 'Toni Morrison: The Pieces I Am' Charts Her Life Through Her Work Timothy Greenfield-Sanders' discursive documentary features Morrison addressing the camera and dispensing earned wisdom and zingers by the bushel. 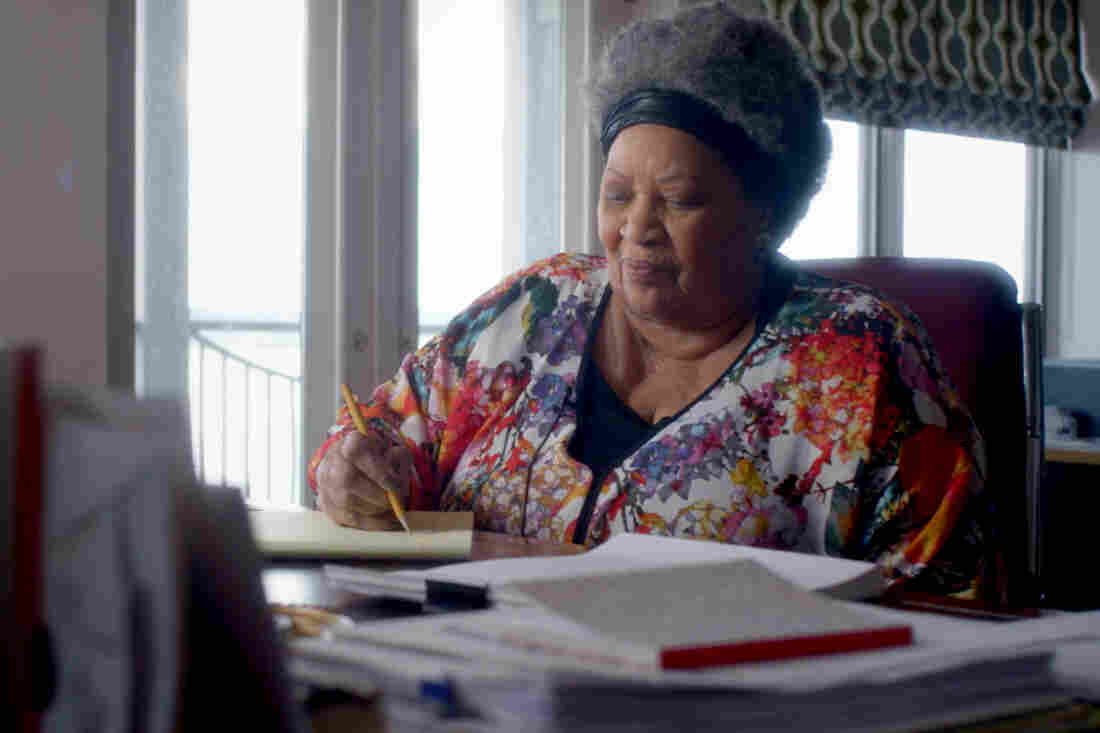 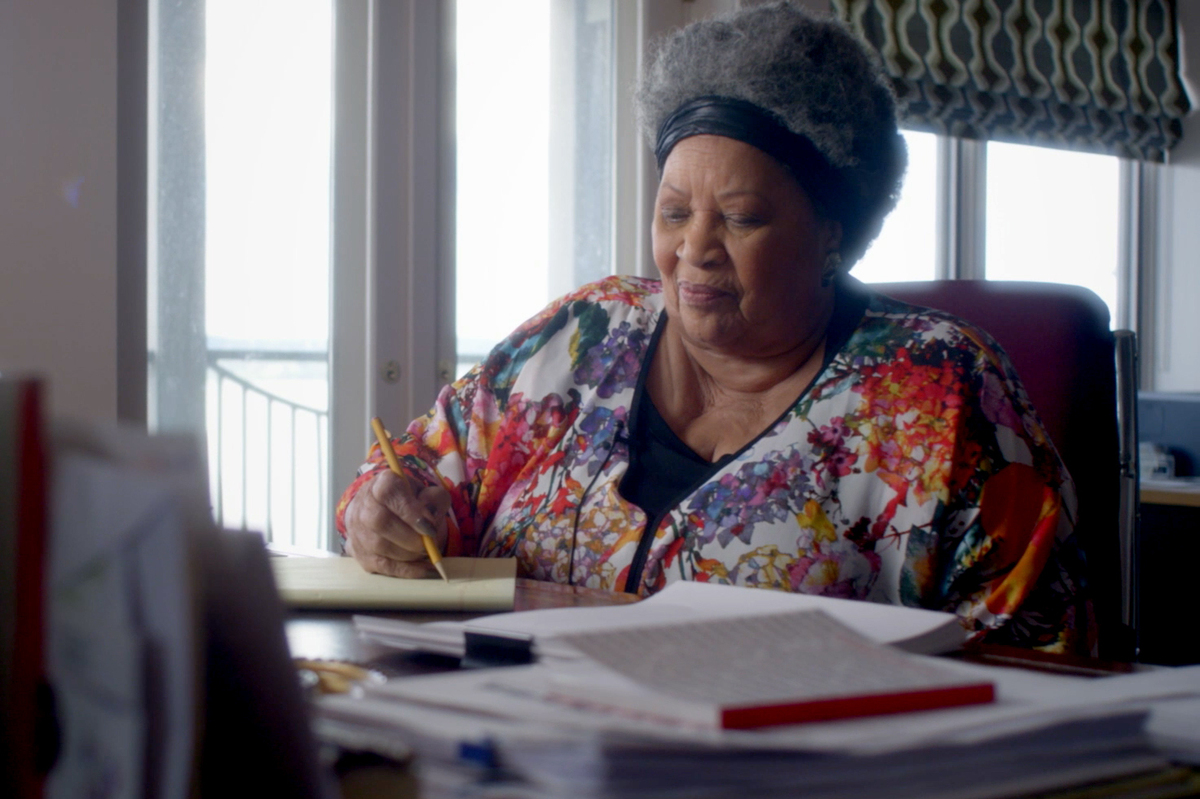 The work and impact of iconic writer Toni Morrison is surveyed in a new documentary directed by filmmaker and portrait photographer Timothy Greenfield-Sanders.

Toni Morrison had advice for the students in her Princeton University creative writing class: "I don't want to hear about your little life."

It's not as brash as all that, because anyone who has heard Morrison speak over the years knows she's someone who shares compassion and love easily with her readers and peers. Her own characters, also, often think of their lives as "little," because they are black and they've been driven into self-loathing by the racist framework of the country and time period in which they live. It is by training her gaze on the dramatic weight of their existence that Morrison grants the literary "bigness" society has denied them.

So what Morrison meant, she says now, was that good writers learn how to escape the prison of themselves, that it's OK to write fiction from perspectives and cultures that are entirely new to you. This simple piece of advice from one of the 20th century's most potent forces in American letters feels downright radical in 2019, as it requires us to acknowledge that maybe some kinds of "cultural appropriation" aren't so bad after all. But as it turns out in the lovely new documentary Toni Morrison: The Pieces I Am, Morrison herself has the kind of life we do very much want to hear about. And like the lives of her characters, there's nothing little about it.

Directed by Timothy Greenfield-Sanders, a longtime friend of Morrison's, the film is a literary portrait in still images, text and interviews. The author speaks directly to the camera, imparting her experience to us; at 88 she's still as generous and energetic as ever, dispensing earned wisdom and zingers by the bushel. The film is not a strictly chronological journey through its subject's career, nor is it comprehensive by any stretch (we hear very little of her work after 1987's Beloved and no mention of her son Slade, who collaborated with her on many children's books before dying of pancreatic cancer nearly a decade ago). But it is nevertheless a fitting tribute, breaking up heady discussion of Morrison's major works with jazzy digressions about her family's Great Migration journey from the South to her cherished multiethnic suburb of Lorain, Ohio.

Morrison has been writing for nearly 50 years, having published her debut novel, The Bluest Eye, in 1970 while working as an editor at Random House and raising two children on her own after a divorce. In the film, her triumph is treated as the spoils of a superheroic work ethic (she would routinely rise at 4 a.m. to make time to write before her kids woke up). But the film also shows that Morrison knew what she was going for at every stage of her life, even when the establishment — both white and black — tried to stand in her way.

Morrison recalls her shock, as an undergrad at Howard University, at discovering separate sororities for light-skinned and dark-skinned women, foreshadowing her works like Eye, in which a young black girl wishes she were white so that she could be "beautiful." Later, as a single parent and professional editor largely responsible for ushering many influential black voices into the public sphere, Morrison nevertheless had to march into her boss's office to demand a raise equivalent to her male counterparts'. "I am head of household," she recalls telling him. "Just like you."

Concentrating primarily on Eye, Song of Solomon, Beloved and The Black Book (a compilation of newspaper clippings, drawings and photographs from black American life), the documentary itself is also a formative work of literary criticism, because it takes Morrison's earliest critics to task. When she first came on the scene, outlets like The New York Times kept her at arm's length, dismissing her period narratives about impoverished black Americans as ghettoized literature and declaring she was "far too talented" to focus only on "the black side of provincial American life." The Times later lumped Morrison together with Ishmael Reed and Gayl Jones, three writers of wholly different styles — the only common thread being their blackness.

Even once elevated to bestseller status, thanks to multiple appearances on Oprah's Book Club (Oprah Winfrey reveals in the film that she illicitly tracked Morrison's phone number to develop a relationship with her), Morrison still sat outside the white literary establishment, as expressed in a 1988 Times op-ed penned by 48 black writers and intellectuals protesting the fact that she had not yet won a National Book Award or Pulitzer Prize. The publication of Beloved had finally tipped the scales and made it impossible to deny Morrison's status as a national treasure, yet the largely white awards-making bodies denied it anyway, until she did win a Pulitzer later that year and the Nobel Prize in literature in 1993.

What was going on here? Morrison knows: Historically, books by black authors were being written and critiqued with "the assumption that the reader is a white person." So fiction from nonwhite perspectives was only valuable inasmuch as it could teach something to white people or otherwise find some way to "relate" to them. One of the film's best qualities is how it turns the story of Morrison's ascent to the literary canon into the story of how a novelist finds sovereignty: the freedom to write stories from the perspective they deserve, not the one imposed upon the work by white people. Which also means, as many subjects point out, the freedom to go through life without desiring the approval of people who don't know how to read your work anyway.

"Now I own the world," Morrison says. "I can write about anything." It's the lesson she was born to give.