Accessibility links
Review: An Intimate Look At 'The Edge Of Democracy' In Brazil Petra Costa's urgent, engrossing documentary mixes memoir and reportage, raising more questions than it manages to answer about the past, present and future state of Brazilian democracy. 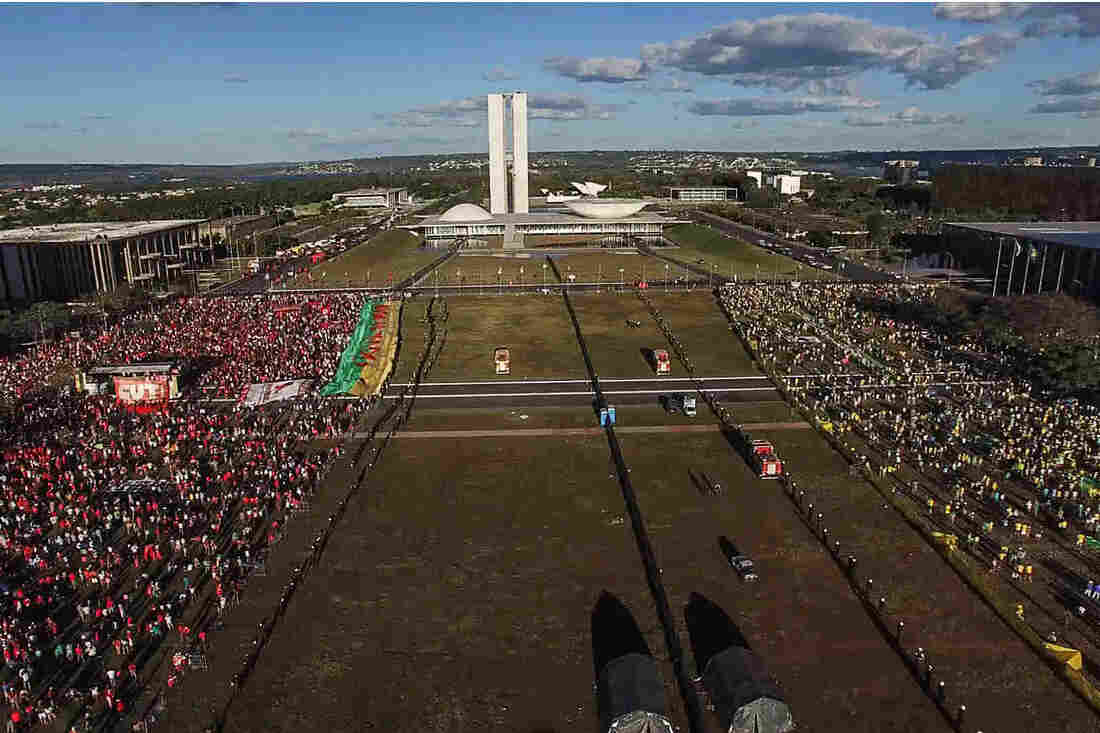 Brazilian filmmaker Petra Costa chronicles the rise and fall of democracy in Brazil from 1985 to the present in The Edge of Democracy. Netflix hide caption 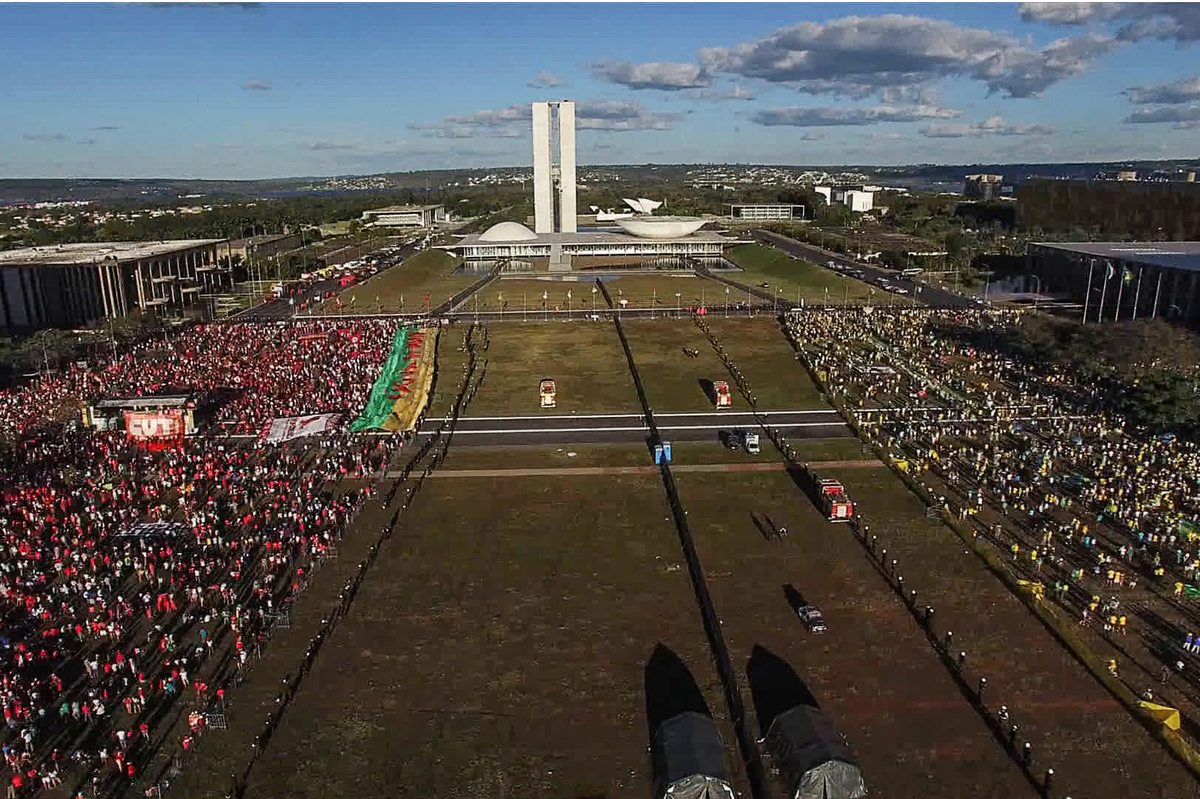 Brazilian filmmaker Petra Costa chronicles the rise and fall of democracy in Brazil from 1985 to the present in The Edge of Democracy.

Halfway through Petra Costa's engrossing new documentary, The Edge of Democracy (2019) — a mesh of personal memoir and reportage — Gilberto Carvalho, the Ex-General Secretary of Presidency for Brazil's Workers Party (PT), sums up the party's seventeen years in power: "We didn't make the political reform necessary to end the curse of business campaign financing. There lies the mother of corruption."

The aforementioned PT is the party of one of the most popular politicians in modern history — the former metallurgical worker and ex-president Luiz Inácio Lula da Silva — and of his protégé, Dilma Rousseff, who became president in 2011, and was impeached in 2017.

Rousseff's impeachment lies at the heart of Costa's film, which dropped on Netflix Wednesday; it is the edge, or the precipice, that tests the soundness of the country's executive, legislative and judicial branches. In her preamble, Costa briefly recounts the beginnings of Brazilian democracy, born in 1989 — six years after Costa — following decades of military dictatorships. Costa then outlines the circumstances of Rousseff's downfall, which sealed PT's defeat, and opened the door for the election of the current right-wing president, Jair Bolsonaro.

Costa, whose previous films include Elena (2012), about her sister's prolonged depression and suicide, and Olmo and a Seagull (2015), which blended observation and performance, once again frames a broad-reaching reportage with a personal story. This twofold approach yields poignant moments, though it also limits Costa's ability to more fully engage the complexities of historical flux.

Costa's parents, like Rousseff, lived in hiding during the dictatorship. Costa shows her family's archives, including the 1970s photographs of her parents when they met and joined the opposition, along with archival images of protests. In a poignant time-leap, a home video shot years later shows Costa joining the political process: She grins to the camera as she casts her first vote, and moves closer to a "world we wanted to live in." The main protagonist of her dream is, of course, Lula da Silva: Stirring archival footage recalls the charismatic young Lula rousing immense crowds, around a time when he formed the Workers Party, in 1980. We then leap forward: After losing three political campaigns, Lula was elected President in 2002.

Costa's personal angle yields remarkable moments, such as when she brings her mother to Brasilia, to the Presidential Palace, Alvorada, to meet Rousseff. As they stand in what looks like a backdoor parking lot, Rousseff speaks candidly about missing her personal freedom — the anonymity she had while in hiding.

With stylish 1950s architecture that favors clean lines, high-vaulted white concrete, and modernist furniture, the Alvorada provides a striking backdrop. The film's cinematographer João Atala returns repeatedly to its empty rooms, the camera gliding slowly along its darkened interiors, as if in a ghost story. It is, indeed, a poignant metaphor for The Edge of Democracy, as one by one, Alvorada's inhabitants are pushed off the political stage: First Rousseff, then Lula.

So many factors contribute to the capital's political drain that Costa struggles at times to address them all, seeking some measure of impartiality, while also speaking to her profound disillusionment with the political process. Once installed in Congress, she spends months chasing down politicians, to quiz them on why Rousseff is being impeached. Their answers vary: Being cold and temperamental, antagonizing the media, bad economy. Costa adds some other reasons: austerity measures that hurt the poor and undermine Rousseff's popularity, plus her support for the anti-corruption investigations, Operation Carwash. The latter reveals a vast network of bribes paid by construction companies to prominent politicians — PT among them.

Thus, in Carvalho's prescient telling, PT, and with it, Lula and Rousseff, fall at least partly as a result of failing to reform Brazil's corrupt and dysfunctional political machine (Costa, whose grandfather founded a construction firm, Andrade Gutierrez — also implicated in Operation Carwash — dutifully notes that, with the exception of her parents, nearly her whole family have stood on the regimes' side).

Costa had access to the impeachment proceedings, and shows how that machine geared up to try Rousseff for "fiscal responsibility," an offense whose gravity Costa and much of international press have called into question. Costa reserves the final word for Lula, who notes that only an international committee can impartially proclaim whether allocations like Rousseff's, to plug budget gaps, violate the law.

Meanwhile, Lula has been questioned about a triplex registered under someone else's name but believed to be a bribe. That investigation is also shrouded in doubts: Whether Lula should have been required to testify, whether he wanted to shield himself by trying to take a post as Rousseff's Chief of Staff, whether leaks of recordings should have been admitted as proof by the prosecuting judge, Sérgio Moro. In the film, Rousseff's international lawyer, Geoffrey Robertson, goes as far as to question the efficacy of Brazil's judicial system, claiming that it robs the defendant of a right to an impartial judge.

There is no room to answer all these questions in Costa's film, partly because the denouement is still underway — Lula remains in jail, sentenced to twelve years, while Moro has become Bolsonaro's Justice Minister. But will he sentence more high-level officials for taking bribes? Will anti-corruption trials continue, as right-wing politicians, now in power, face trial? Costa's film points to secret pacts to thwart justice that have already taken place.

"Where do we gather the strength to walk through the ruins and start anew?" Costa muses in the finale, evoking repeatedly — perhaps a bit naively — the ideals and precepts of Greek democracy (on the severe limitations of those, another recent documentary, What is Democracy?, by Astra Taylor, is an essential viewing).

For now, Brazil's democracy emerges as a bruised and battered adult. Costa herself is shaken, haunted by her family and country's past — more precisely, by how the few powerful families, like hers, dictate the country's fate. Nevertheless, a samba over the closing credits offers a cautiously upbeat tone. An ending that suggests, at least for now, that Brazilians have suffered too much, fought too hard, to easily give up hope.