Accessibility links
Stonewall 50: LGBTQ Movement's Culture War With The Religious Right Persists An uprising around a New York bar, Stonewall Inn, 50 years ago sparked a movement pushing for LGBTQ civil rights. The success of that movement saw a powerful backlash from the modern religious right.

Listen · 4:34 4:34
The Culture Wars Live On Between The LGBTQ Rights Movement And The Religious Right 4:34 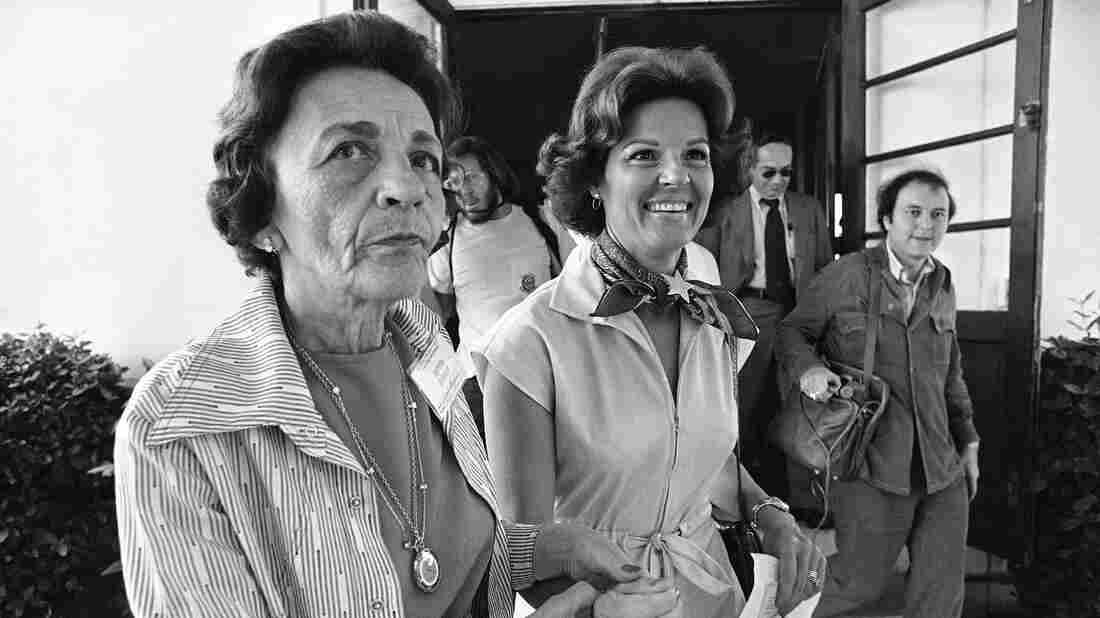 Singer Anita Bryant (right) is led to the voting booth at her Miami Beach polling place by volunteer Leah Dezen in 1977. Bryant was the leader of the opposition group Save Our Children, whose members pushed for the repeal of a gay-rights ordinance in Miami-Dade County. Kathy A. Willens/AP hide caption 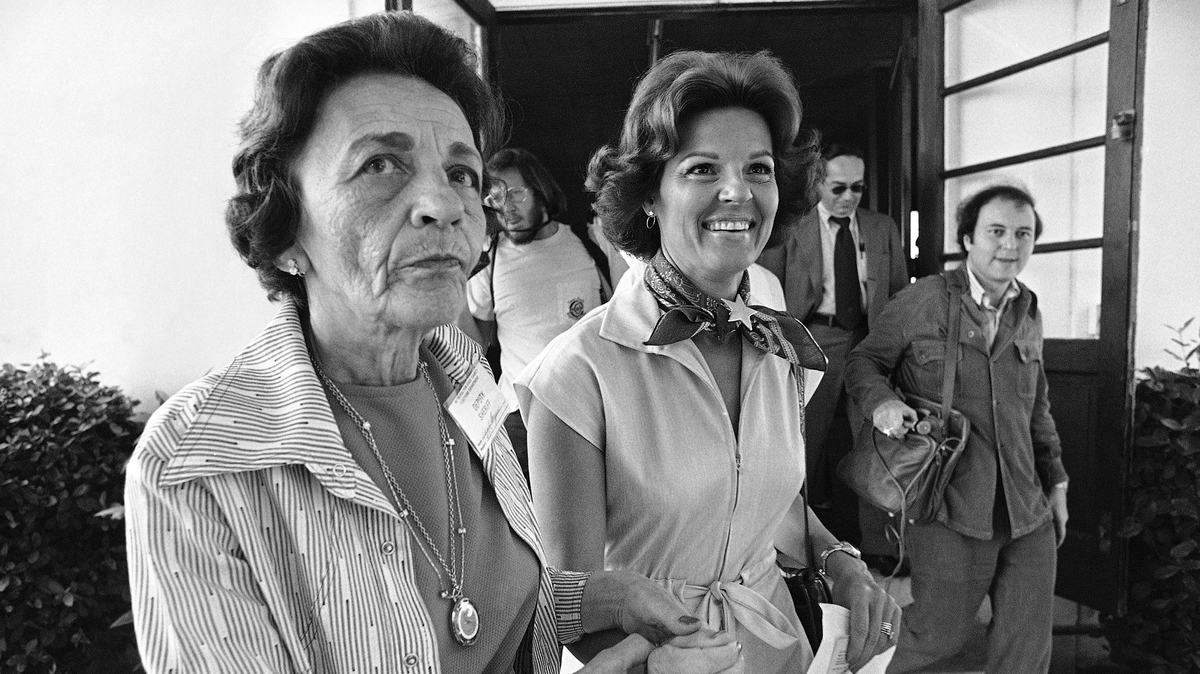 Singer Anita Bryant (right) is led to the voting booth at her Miami Beach polling place by volunteer Leah Dezen in 1977. Bryant was the leader of the opposition group Save Our Children, whose members pushed for the repeal of a gay-rights ordinance in Miami-Dade County.

The protests surrounding New York City's Stonewall Inn, 50 years ago this month, were a seminal moment.

But the success of that movement in the years that followed saw a powerful backlash from the modern religious right. The two movements became opponents in a culture war that continues today.

The protests by LGBTQ activists that followed Stonewall remade the movement, known as the gay movement at the time. It spurred more lesbian, gay and bisexual Americans to come out to their families, their communities and actively push for LGBTQ civil rights. LGBTQ historian Lillian Faderman points to the formation of the Gay Liberation Front shortly after the uprising, and pride parades a year later to commemorate the protests. Those parades now span cities across the country and the world.

At first, the religious right ignored the LGBTQ civil rights movement as a blip that would never break into the mainstream, Faderman said — until it started making progress.

"As the gay movement succeeded and as various cities began to pass gay-rights ordinances usually to incorporate the term 'sexual and affectional preference' in existing nondiscrimination ordinances," Faderman said, "I think that woke the religious right up to begin to push back. The real beginning, I think, of the culture wars in earnest was in 1977."

That's when Anita Bryant, a pop singer and pageant queen best-known at the time as the face of Florida orange juice, began a public campaign to fight an ordinance passed in Miami-Dade County to stop housing and employment discrimination based on sexual orientation.

Anita Bryant, a beauty queen and pop singer best-known as the face of Florida orange juice, became the face of the anti-gay movement.

Bryant, a devout Baptist, spearheaded a campaign against the ordinance and triumphed.

Two to one, voters chose to repeal the ordinance.

"Because of her efforts on a national scale this became a national conversation in a way that it hadn't necessarily been," said Emily Johnson, a historian at Ball State University in Indiana. Her book, This Is Our Message, profiles female leaders in the modern religious right.

Bryant, she said, became an icon in the fight against gay, lesbian and bisexual rights, traveling across the country to oppose similar ordinances. She formed a homophobic group, Save Our Children, aimed at stopping the passage of LGBTQ protections in counties across the U.S. and stopping openly gay, lesbian and bisexual people from teaching in schools. 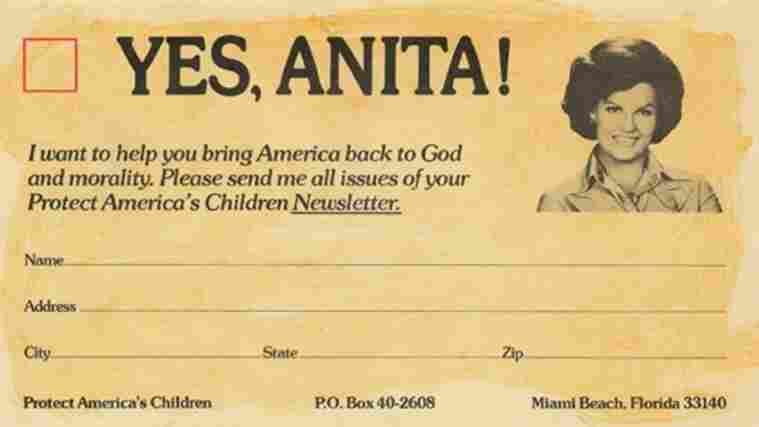 toggle caption
Save Our Children Inc. 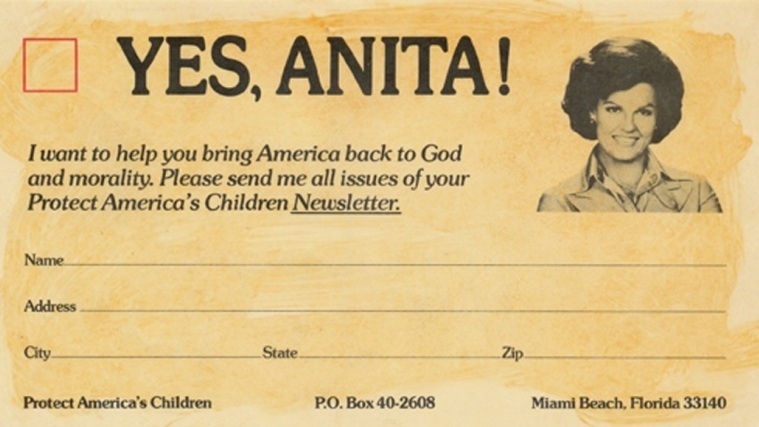 A 1977 fundraising card for Save Our Children, a group aimed at stopping openly gay, lesbian and bisexual people from teaching in schools.

Save Our Children Inc.

At the peak of Bryant's homophobic activism that year, an assistant to then-President Jimmy Carter, Midge Costanza, made the decision to invite gay-rights leaders to the White House. It made national news, Faderman said, and Bryant and her supporters loudly protested against the meetings.

From the anti-discrimination ordinances of the '70s and '80s to the fight for marriage equality and today's battles over transgender people's right to use the bathroom of their identity or continue to serve in the military, each movement is strategizing to counter the other. 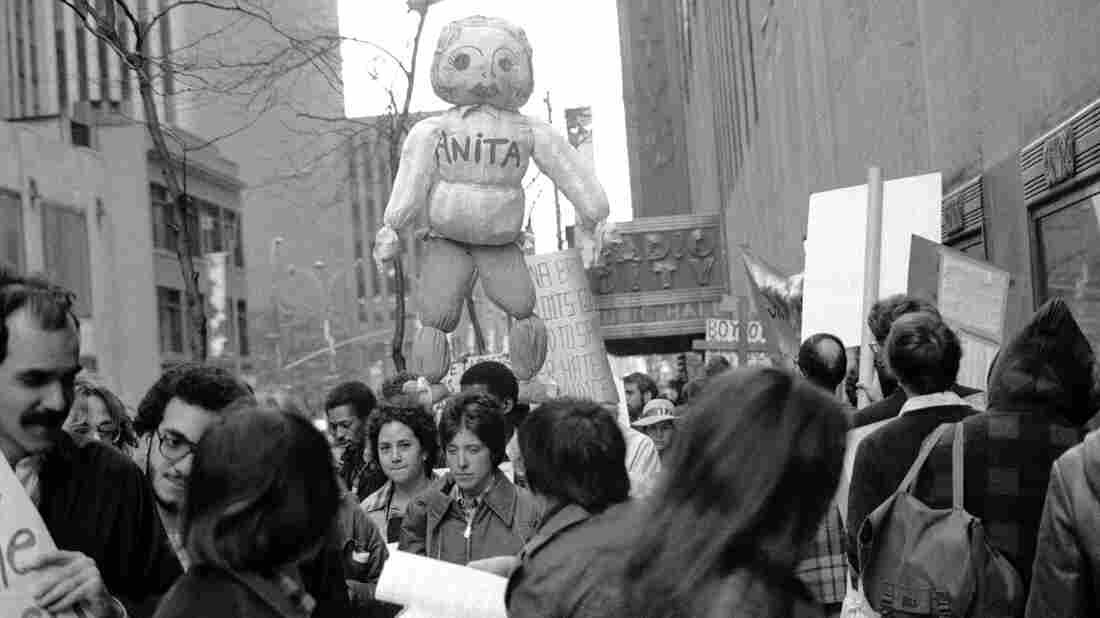 About 100 activists demonstrate at the NBC Building in Manhattan on Nov. 3, 1977, to protest the airing of a taped interview with Anita Bryant on the network's Today show. CEH/AP hide caption 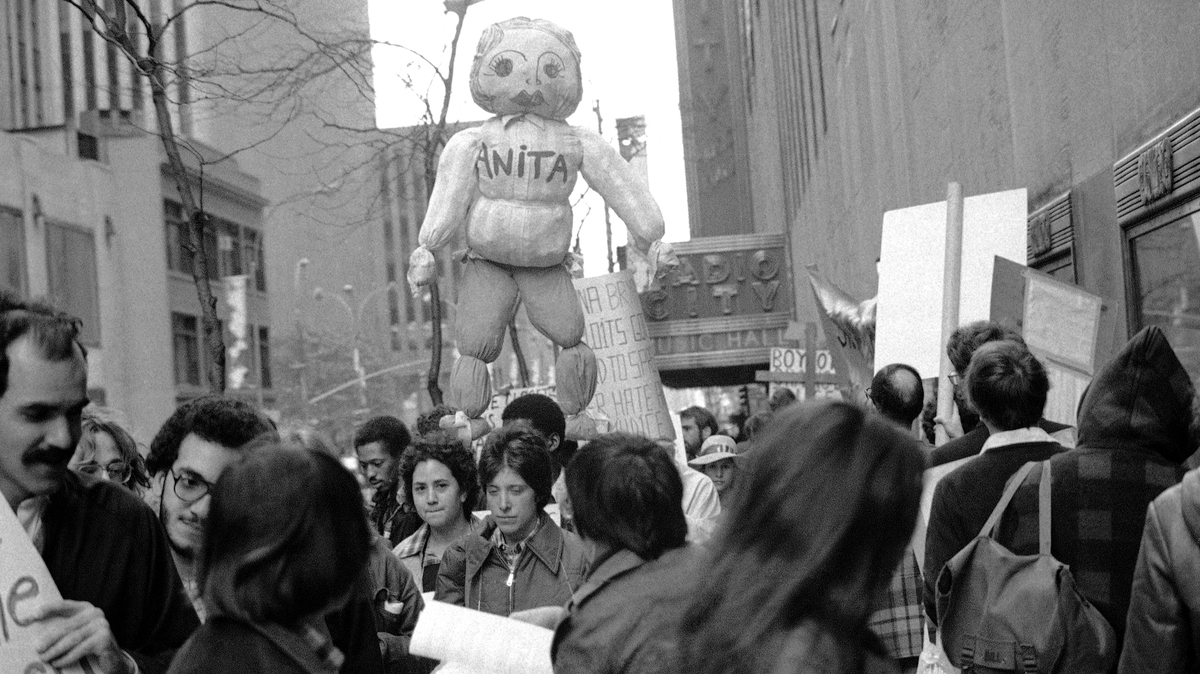 About 100 activists demonstrate at the NBC Building in Manhattan on Nov. 3, 1977, to protest the airing of a taped interview with Anita Bryant on the network's Today show.

They are "perfect enemies," wrote journalist Chris Bull. That's the title of the book he co-authored on the religious right and the LGBTQ movement. And in the past couple of decades, the LGBTQ rights movement saw a string of victories.

"Today we have marriage equality; gay people serve openly in the military," Bull said. "Twenty states have protections in the workplace for LGBTQ people. This is an extraordinary change. I don't think anyone at Stonewall could have really imagined this happening so quickly."

Today, a majority of Americans favor LGBTQ rights, including many people of faith. It's no longer socially acceptable or politically effective, Bull said, to demonize queer people. But that doesn't mean this culture war is over, especially for transgender Americans.

"There are still many states where you can be fired for being gay, and perhaps most significantly trans people are really being targeted by the Trump administration for discrimination," Bull said. "He's put a ban on openly trans people serving in the military, and religious right activists are organizing at the grassroots level to make life harder for trans people, with bathroom bills and all kinds of legislation aimed at stemming the equality movement on behalf of trans people."

In many places in the United States, you can still be denied housing or lose jobs over your sexuality and gender identity. And, Bull said, the culture war is being fought through the courts and state legislation. Groups on the religious right now say this is a freedom of speech and freedom of religion issue for some people of faith. The argument is that when cake-makers or photographers comply with nondiscrimination laws by serving LGBTQ people at their businesses, they are going against their faith.

"The Supreme Court hasn't really determined a position on this notion yet," Bull said.

If the court decides there are exemptions to civil rights law, Bull said, "it puts gay people in an awkward position of not knowing where or what kind of businesses they can use and [at] which ones they're not welcome. ... Right now is a pivotal time for LGBTQ rights."

The battles between the two movements, Bull said, is ongoing, but the lines of that culture war have been redrawn.