Accessibility links
African Migrants Are Becoming A New Face Of The U.S. Border Crisis The crisis on the southern border has been driven by a surge of migrants from Central America. But hundreds of African migrants have crossed the border in recent weeks, many to seek asylum. 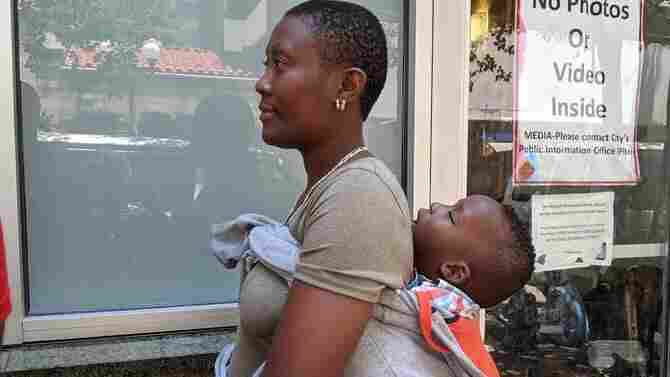 A woman waits in line with her child outside the migrant processing center in San Antonio, Texas. Bonnie Petrie/Texas Public Radio hide caption 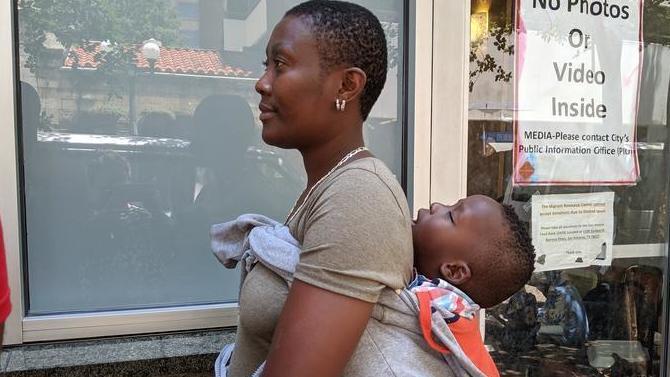 A woman waits in line with her child outside the migrant processing center in San Antonio, Texas.

Filipe and Mireille took their four young children and fled violent militias and civil unrest in the Democratic Republic of Congo nearly five months ago.

They flew to Ecuador, then traveled on foot across Central America to reach the U.S.-Mexico border, where they waited for weeks in a long line of asylum-seekers before being allowed to cross and make the last leg of their journey.

Finally, they reached their destination: a makeshift emergency shelter in Portland, Maine — a converted minor-league sports arena now filled with cots. Filipe describes it as "paradise."

"I was thinking ... what could I wish for in life? And this is what I wish for," Felipe says through a translator. He and his wife did not want to give their last names to protect their privacy.

The crisis on the southern border has been driven by a surge of migrants from Guatemala, Honduras and El Salvador. Now there's a new face of the crisis: Hundreds of African migrants have crossed the border in recent weeks, many to seek asylum.

Like the families from Central America, they are traveling great distances after seeing thousands gain entry to the United States in recent months.

Border Patrol agents in the Del Rio sector of South Texas recently took into custody more than 500 migrants in just one week, mostly families from the Democratic Republic of Congo, the Republic of Congo and Angola. 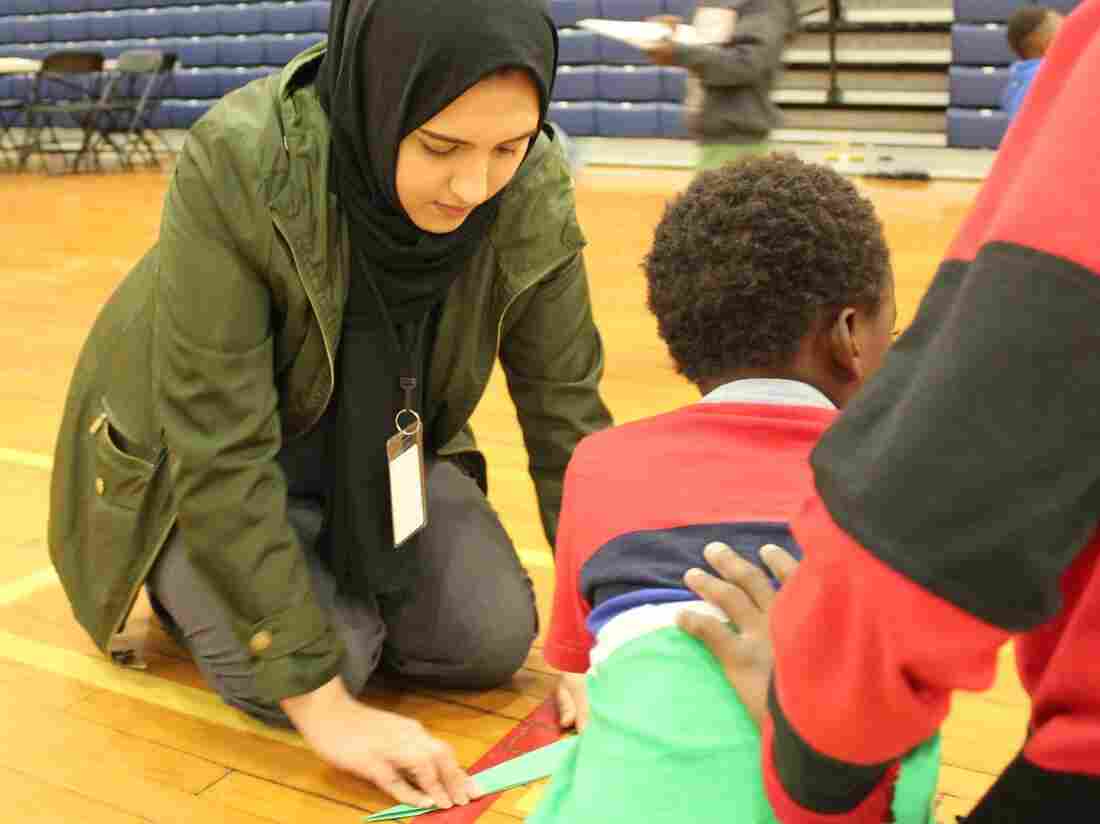 A volunteer folds paper airplanes with a young boy inside the Expo Building in Portland, Maine. Hundreds of migrants, many from Africa, have arrived there this month, and the city has converted the building into an emergency shelter to house them. Robbie Feinberg/Maine Public Radio hide caption 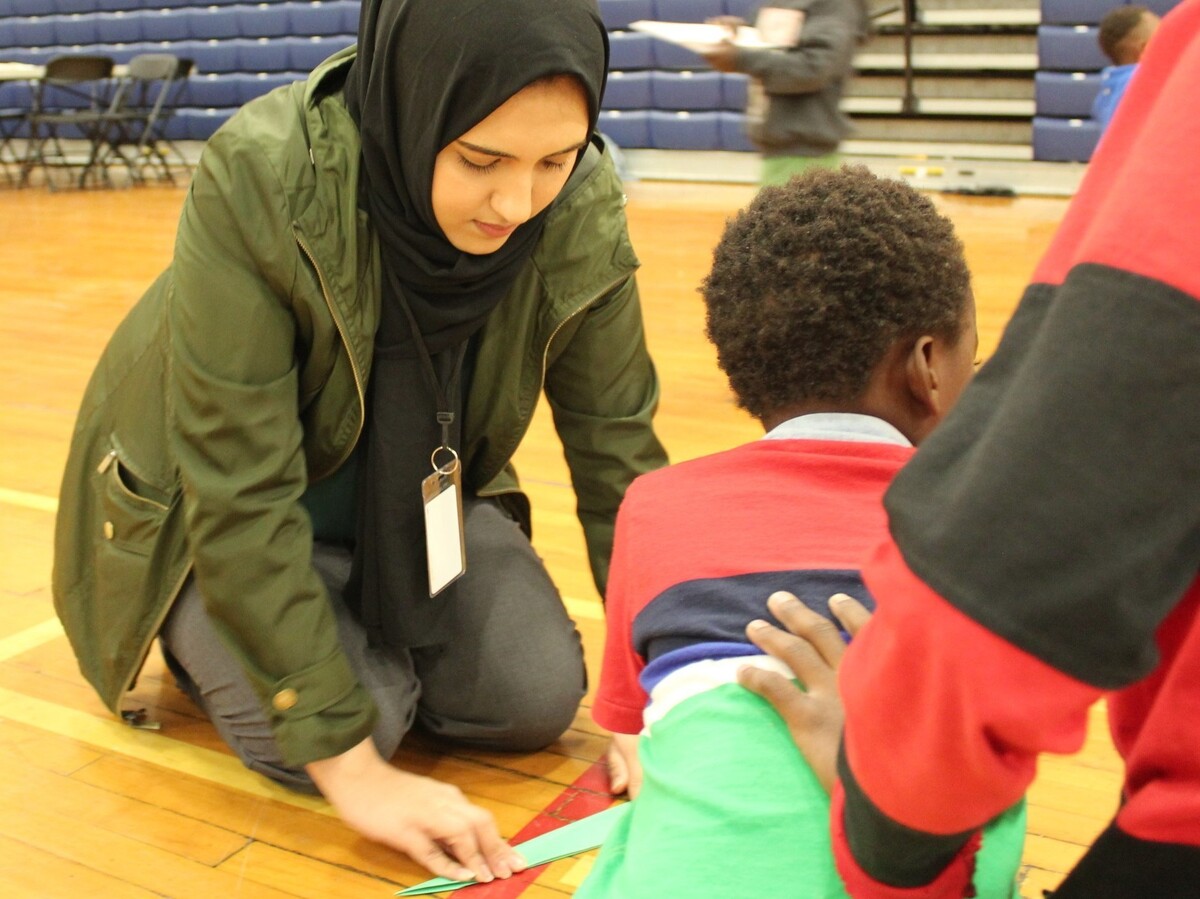 A volunteer folds paper airplanes with a young boy inside the Expo Building in Portland, Maine. Hundreds of migrants, many from Africa, have arrived there this month, and the city has converted the building into an emergency shelter to house them.

"The migrant crisis at the U.S. border has been so well-publicized, and because of all the chaos over policymaking in Washington, D.C., it really gives the impression that the U.S. border is open for business right now," says Randy Capps, director of research for U.S. programs at the Migration Policy Institute, a Washington think tank.

Capps says Central Africans are also drawn to the U.S. because Europe is not so open for business, and because the boat trip across the Mediterranean can be treacherous. In fact, Capps says, many don't even make it to the sea. They're in refugee camps in North Africa.

"Many of them are stuck and languishing in really poor conditions, some in near slave conditions in Libya right now," Capps says. "So when conditions at home are desperate, and the Europe option doesn't look good, the high-priced, long-distance option to come to the U.S. might be worth it."

First, many of these migrants fly to South America. And when they get there, they find well-traveled roads to follow north, Capps says.

"That journey through Central America and Mexico has been facilitated by these large migrant caravans, by more sophisticated and faster smuggling routes, and it's an easier journey from Guatemala onward than it has been in the past," he says.

Capps says the U.S. can expect more migrants from all over the world to seek asylum in the United States unless Mexico does more to stop them. After threatening to impose tariffs, President Trump recently gave Mexico 45 days to act. Mexico pledged to beef up security on its southern border.

Many of the African asylum-seekers have then made their way to cities like Portland, Maine, with large, established African immigrant communities. And just as the surge of migrants is overwhelming border agents and the nation's immigration court system, it is also taxing social services from Portland to San Antonio, Texas.

In that border city, migrants pile into white vans once they cross the border. The shuttles drop the families off on a busy street corner downtown, outside the city's migrant service center. When migrants started arriving from places like the Congos and Angola, it didn't take city workers long to figure out they would need translators.

"So we're down here working with the city right now at the relief center, helping purchase bus tickets, and we brought down a lot of staff who speak Swahili or French to help with language needs," says Peter Stranges, who works for Catholic Charities in San Antonio.

Stranges is usually more of a desk guy — a vice president at Catholic Charities who rarely interacts with the immigrants it serves. But he also speaks French, he explained outside the service center, where he was talking to a cluster of serious young men and a woman with a sleeping baby strapped to her back.

"So getting here, a lot of people don't know what city they're in when they arrive. They're also hungry, tired and they're thirsty," Stranges says. "So we're just helping them reach out and get in contact with sponsors who may be able to help them on their journeys."

Michele, from Kinshasa in the Democratic Republic of Congo, was one of the few who did speak English. He says he, his wife and three children had to leave. They fled political strife and civil unrest in January, flying to South America and trekking north, crossing the U.S.-Mexico border in the Texas Del Rio sector.

"Congo life is not good. The political situation is not good, and I came here," he says, declining to give his last name. "I think I'll have a good life."

In Portland, Mireille and Filipe describe their own arduous journey.

"We spent five days with no food for the children at all. All the food we had brought was finished," Mireille says through a translator, sitting with their children near several cots they pushed together to create a space for their family.

Filipe says they pushed themselves to keep going, drinking sips of juice to maintain their energy. They'd carry the children on their backs, he says, traverse rivers, and teeter along paths through the mountains of Panama.

"I can't advise anyone to come. I just thank the eternal God for the grace to get me here," he says. He hopes to work as a driver here, like he did in his home country.

"We need to do everything we can to make sure that when they arrive, they are stable," he says. "And that they, as quickly as possible, are able to get on their feet and start supporting their families and contributing to our economy."

But the influx has stressed the city, which didn't have enough room in shelters to house the many newcomers who arrived last week. The makeshift emergency shelter at the arena now houses more than 200 asylum-seekers.

At the shelter, volunteers offer food and health supplies to the migrants. Some translate and build arts and crafts projects with the young children.

Immigrant communities and advocacy groups have worked with the city to volunteer and get supplies to the newcomers — everything from diapers to snacks. And donations have poured in to a city-run fundraiser — $350,000 so far.

City Councilor Justin Costa told Maine Gov. Janet Mills at a public meeting last week that Portland still faces the long-term challenge of how to house and aid these migrant families in the months ahead.

Mills told city leaders that the state hopes to help out. She says that these migrants have endured brutality and bloodshed, and the people of Maine have a "proud tradition" of caring for their neighbors.