Accessibility links
For Those Missing Puerto Rico, 'En Mi Viejo San Juan' Is Both Anthem And Lament The official anthem of the capital city, "En Mi Viejo San Juan" also serves as a nostalgic lament, evoking memories of the island for the many forced to leave it behind. 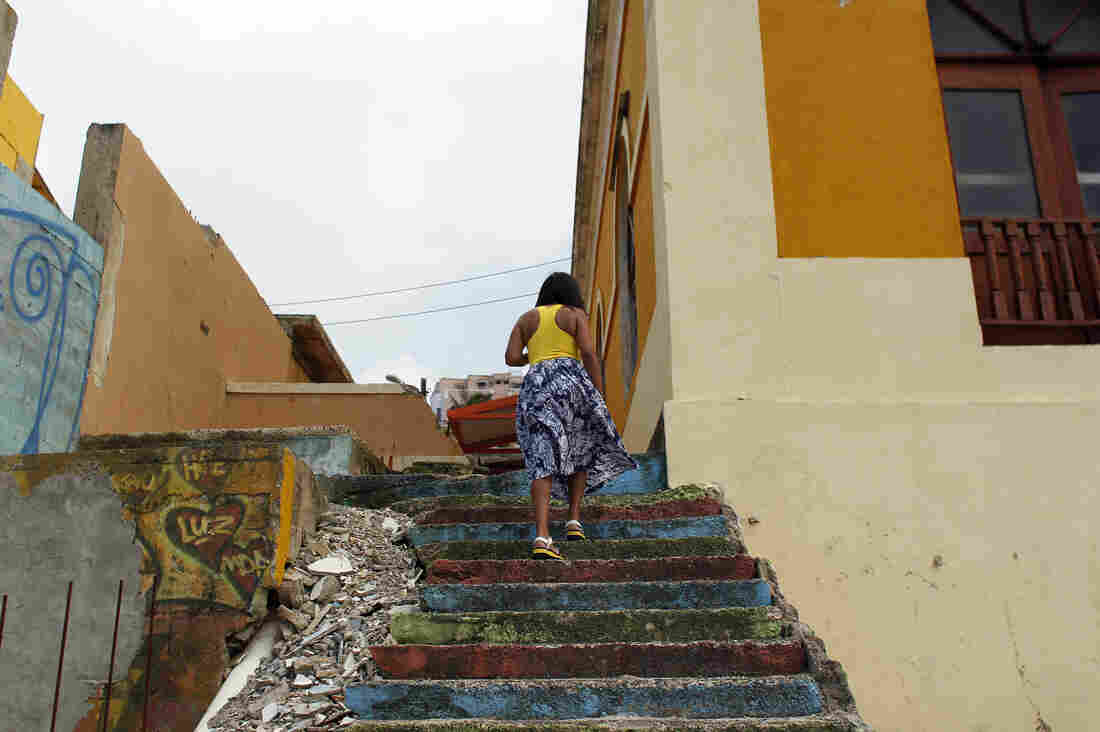 A woman walks through La Perla, a neighborhood on the edge of Old San Juan, in 2017. AFP Contributor/Getty Images hide caption 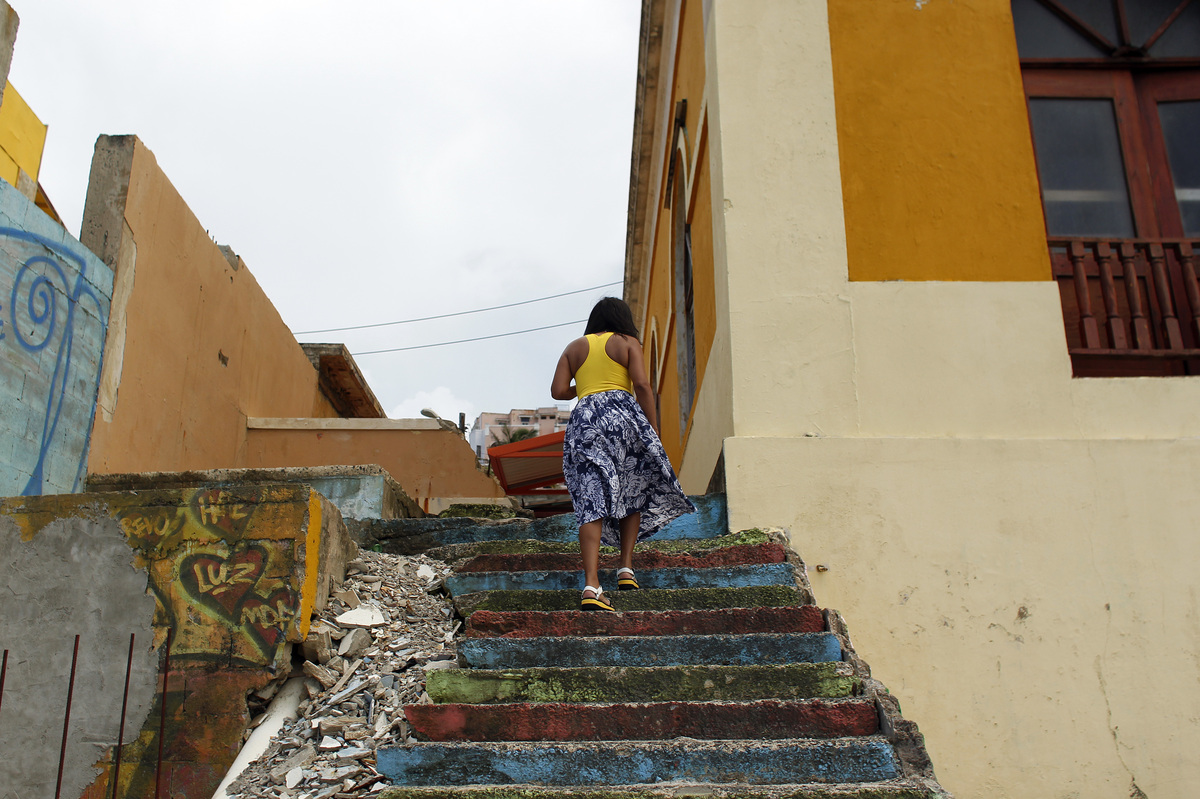 A woman walks through La Perla, a neighborhood on the edge of Old San Juan, in 2017.

Step inside Puerto Rico's National Foundation for Popular Culture in Old San Juan and you'll find a well-stocked display of CDs and records for sale, organized by artist or musical style: Sylvia Rexach, Maelo Rivera, rumba, salsa. But then there's a tab that catches the eye because it names neither an artist nor a style, but rather a theme: "nostalgia."

Within the canon of popular Puerto Rican music, there is no shortage of songs about that sentiment — particularly about nostalgia for the island itself, often written by or for or about people who have had to leave Puerto Rico for one reason or another, but who yearn to return. 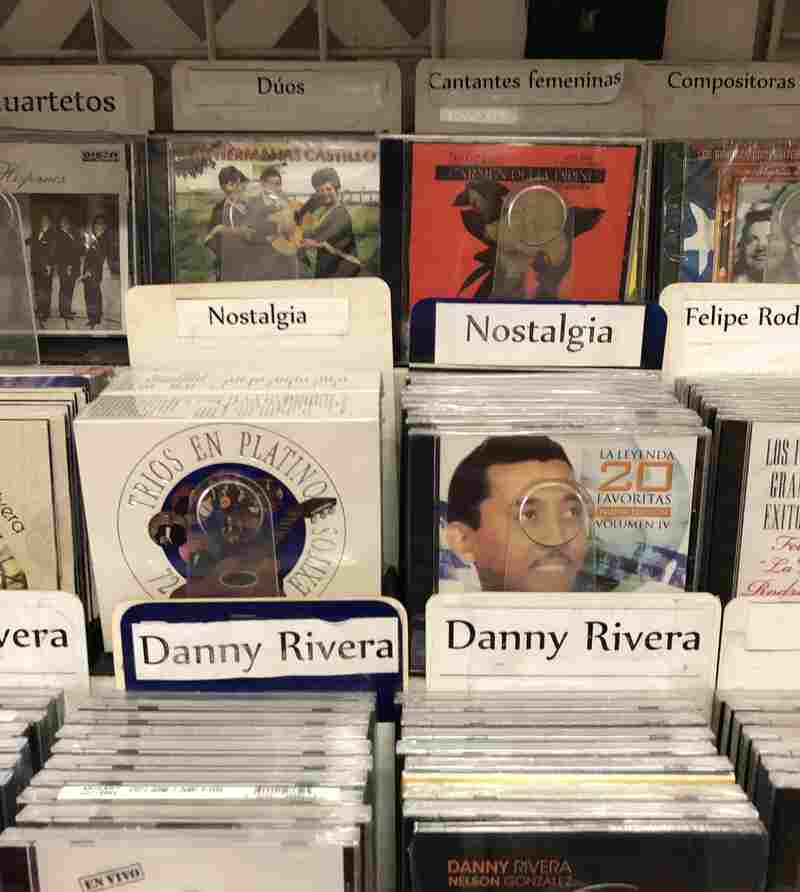 It is one of the tragedies of Puerto Rico's modern history: the recurring waves of people forced to migrate, driven out by the economy, or by war, or by natural disasters like, most recently, Hurricane Maria and its aftermath. When you consider that there are more Puerto Ricans living off the island than on it, it's no wonder that nostalgia is such a pervasive theme in the music of the island and its diaspora.

One of the oldest and most enduring of these songs is Noel Estrada's "En Mi Viejo San Juan" ("In My Old San Juan"). Written in 1943 and first recorded by El Trio Vegabajeno in 1946, it's about a man who leaves his beloved island with a plan to return, but finds himself unable to:

Estrada wrote the song at the request of his younger brother Eloy, who was drafted during World War II and stationed in Panama. As the story goes, he was homesick, and in a letter asked his brother to write him a song capturing the longing he felt for his island. In the decades that followed, the song was recorded by all kinds of artists, Puerto Rican and international. Its popularity exploded when Mexican singer Javier Solís released his version in 1965.

Over the decades, "En Mi Viejo San Juan" has tugged at the heartstrings of millions of Puerto Ricans. When Estrada wrote it, the biggest wave of migration in Puerto Rico's history was just beginning. U.S. government policy to industrialize the island destroyed the farms on which most Puerto Ricans worked. Hundreds of thousands of people left for the U.S., where the post-World War II economy was booming.

Today, a different exodus is under way. Hundreds of thousands of people have fled the island as it struggles under a recession going on its 13th year; billions of dollars of public debt that have decimated the government's ability to provide basic services; and austerity and budget cuts imposed by a federal board that Congress appointed to take control of the island's finances. One estimate by that board predicts that Puerto Rico will lose another 20 percent of its population in the next five years.

Though "En Mi Viejo San Juan" is nearly 80 years old and resonates most strongly with an older generation of Puerto Ricans, it still provides a soundtrack for the heartache that people old and young feel over this somber reality. Its final words, reflecting an eternal hope despite the circumstances, may be the reason why: