Accessibility links
Poll: Americans Want NASA To Focus More On Asteroid Impacts, Less On Getting To Mars American attitudes toward space exploration and NASA's priorities have changed ahead of the 50th anniversary of the Apollo 11 moon landing.

Poll: Americans Want NASA To Focus More On Asteroid Impacts, Less On Getting To Mars

Poll: Americans Want NASA To Focus More On Asteroid Impacts, Less On Getting To Mars 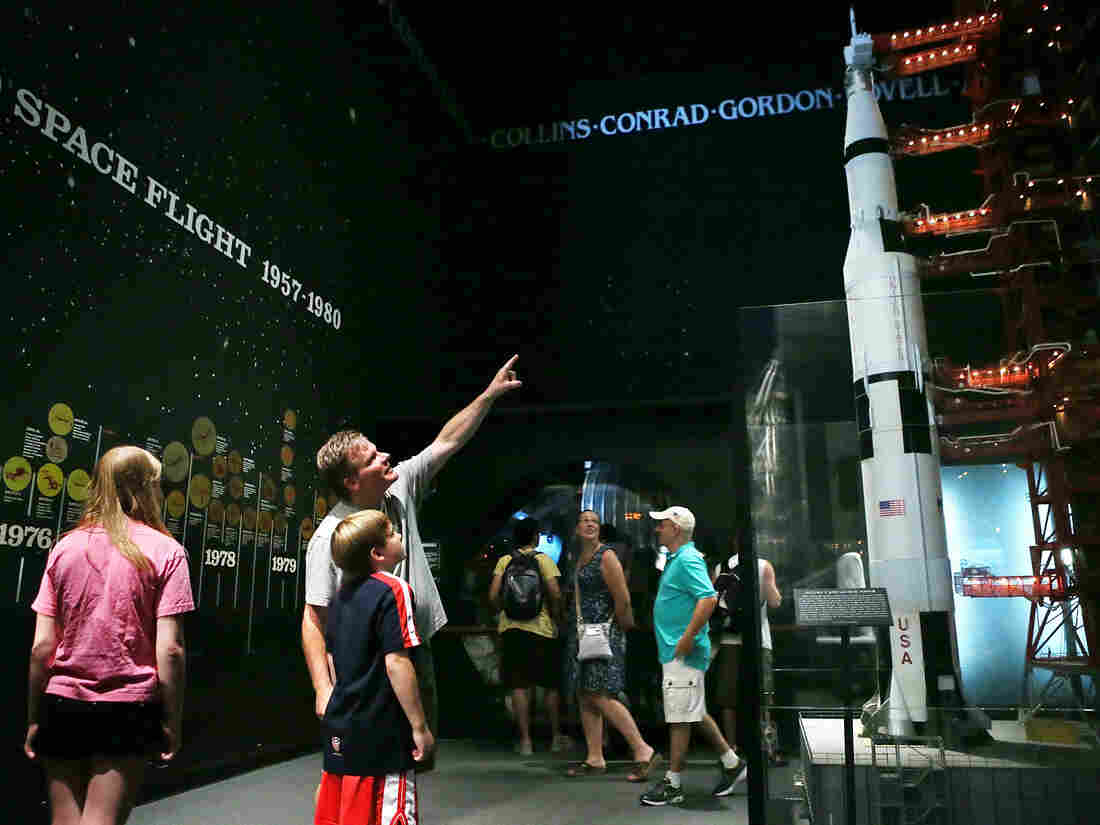 Visitors look at a model of a Saturn V rocket and its launch umbilical tower, which were used during the Apollo moon-landing program, at the Smithsonian National Air and Space Museum in Washington, D.C. Fifty years ago this July 20, Neil Armstrong and Buzz Aldrin became the first humans to walk on the moon. Alex Wong/Getty Images hide caption

Americans are less interested in NASA sending humans to the moon or Mars than they are in the U.S. space agency focusing on potential asteroid impacts and using robots for space exploration. That's according to a poll by The Associated Press and the NORC Center for Public Affairs Research released Thursday, one month before the 50th anniversary of the first walk on the moon.

Two-thirds of respondents said monitoring asteroids, comets and "other events in space that could impact Earth" was "very or extremely important." According to NASA, which watches for objects falling from space, about once a year an "automobile-sized asteroid hits Earth's atmosphere," but it usually burns up before it hits the surface. And the instances of larger objects actually making it past Earth's atmosphere and causing any damage happen thousands of years apart, NASA says.

The poll also found that Americans want NASA to focus on conducting space research to expand knowledge of the Earth, solar system and universe and they want "robots without astronauts" to do it.

Toni Dewey, a 71-year-old retired clerical worker in Wilmington, N.C., told AP in an interview that machines, rather than humans, should be explorers.

"It would cost a lot of money to send somebody to Mars," she said, "and we have roads and bridges that need repaired here."

Dewey is not so interested in going to the moon anymore, saying: "We've been there."

Her attitude is reflected in the survey. Only 23% of respondents favored putting a person back on the moon, and only 27% desire for NASA to pursue crewed missions to Mars. When asked directly where U.S. astronauts should be sent — moon vs. Mars — 37% of survey takers said Mars and 18% said the moon.

Recently, President Trump said NASA should focus on going to the red planet over the moon. That's despite having given NASA a deadline of five years to land a person on the moon again.

"NASA should NOT be talking about going to the Moon," Trump tweeted. "We did that 50 years ago. They should be focused on the much bigger things we are doing, including Mars (of which the Moon is a part), Defense and Science!"

However, the celestial body was a priority for 43% of respondents.

Rounding out the bottom of Americans' desires involving space was establishing a U.S. military presence there. President Trump last year ordered the Pentagon to establish a "Space Force," an endeavor expected to cost an estimated $2 billion over five years, according to The Washington Post. The purpose of the new military arm would be to deter efforts by mainly Russia and China from targeting U.S. space assets.

Americans also seem to be a bit disappointed in NASA, as more than 80% of survey respondents said the U.S. was not leading in space exploration. A recent poll by the Pew Research Center found that the majority of Americans think it's essential that the U.S. be a global leader in space. Americans do appear to still believe that NASA is a benefit overall, which is reflected in the AP-NORC poll with 60% of respondents saying it's enough of a benefit to justify its cost.