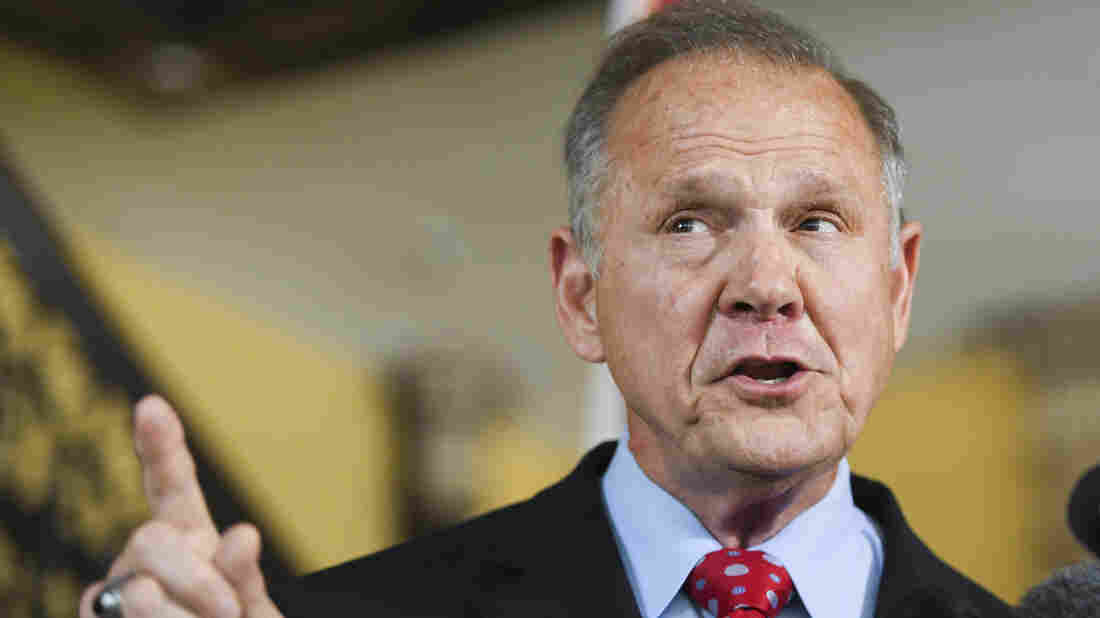 Former Alabama Chief Justice Roy Moore announces his run for the Republican nomination for U.S. Senate on Thursday. He lost the 2017 special election to Democrat Doug Jones after multiple allegations of sexual assault and harassment against him surfaced. Julie Bennett/AP hide caption 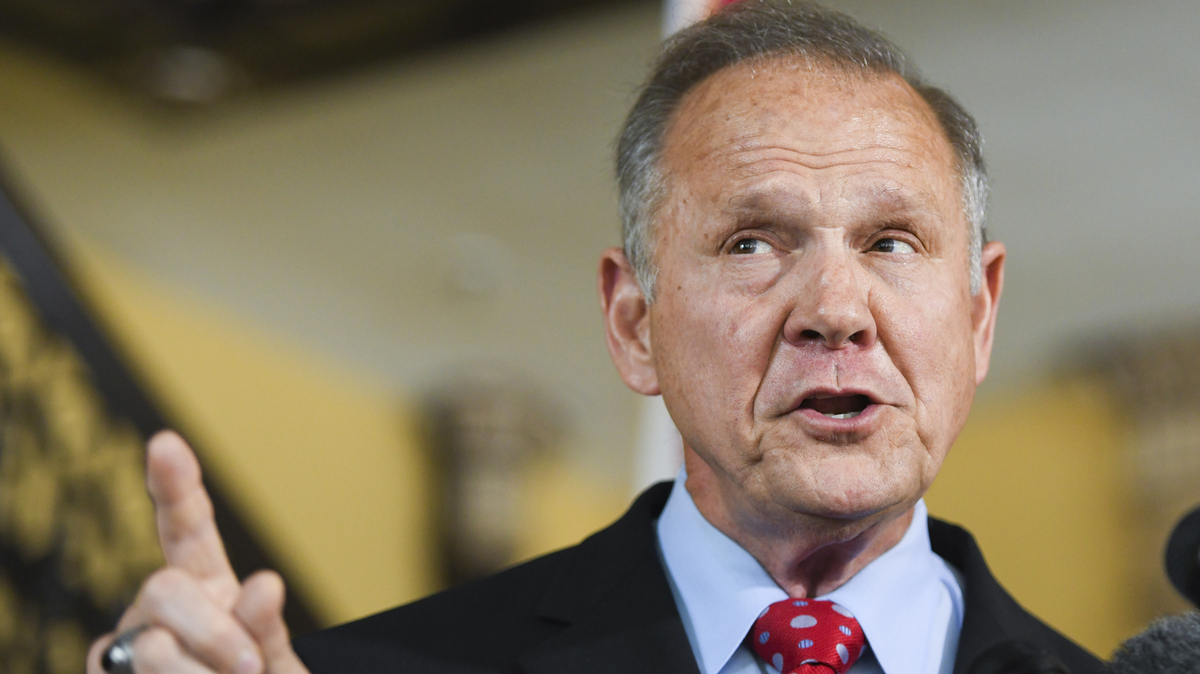 Former Alabama Chief Justice Roy Moore announces his run for the Republican nomination for U.S. Senate on Thursday. He lost the 2017 special election to Democrat Doug Jones after multiple allegations of sexual assault and harassment against him surfaced.

To the disdain of national Republicans and against the advice of President Trump, controversial Alabama Judge Roy Moore announced Thursday he will run again for the Senate in 2020, after losing a winnable race for the GOP as allegations of sexual assault and misconduct against teen girls surfaced from decades ago.

Those multiple accusations — which Moore has stridently denied — led to the Christian nationalist candidate losing the December 2017 special election to Democrat Doug Jones by 1.5 percentage points, just over a year after Trump carried Alabama by 28 points.

But in a news conference in Montgomery, which opened with both prayer and the Pledge of Allegiance, the former Alabama chief justice was defiant, blaming "false flag" attacks from Democrats spreading misinformation for his narrow loss.

Instead, he said, the multiple accusations from women that Moore had pursued them romantically as teenagers when he was in his 30s had "little impact" on the outcome, and Washington Republicans were too afraid of his staunch conservatism and adherence to the Constitution.

When asked what he would do differently during this campaign, Moore said that he "would like to make more personal contact with people."

The news from Moore that he is running again was quickly met with heavy pushback by national Republicans, who had long urged him not to run again for fear his candidacy would endanger their chance at flipping Democrats' most vulnerable Senate seat next year. Moore wasn't their first choice in 2017 either, as many lined up behind Luther Strange, the Republican who had been appointed to fill the remainder of former Attorney General Jeff Sessions' term. But Moore would go on to beat Strange, the former Alabama attorney general, in a runoff by more than 9 points.

The National Republican Senatorial Committee, whom Moore specifically blamed during his announcement as plotting a "smear campaign" against him, re-upped the statement that NRSC Chairman Todd Young, R-Ind., issued last month and reiterated that "the people of Alabama rejected Roy Moore not too long ago."

"I with my Republican colleagues always want to be supportive of the most conservative candidate who can actually win a race, and I don't see that anything has changed in the state of Alabama since the last election," Young told The Associated Press in May. "We'll actively work to make sure that the most conservative, electable Republican is our nominee."

Trump himself — who had stood behind Moore despite the sexual assault allegations as other groups like the NRSC abandoned him — also echoed similar sentiments last month, tweeting that he holds "NOTHING against Roy Moore, and unlike many other Republican leaders, wanted him to win," but "Roy Moore cannot win, and the consequences will be devastating....Judges and Supreme Court Justices!"

...If Alabama does not elect a Republican to the Senate in 2020, many of the incredible gains that we have made during my Presidency may be lost, including our Pro-Life victories. Roy Moore cannot win, and the consequences will be devastating....Judges and Supreme Court Justices!

The Senate Leadership Fund, which is allied with GOP leadership, said in a statement that another nomination of Moore would be an electoral disaster.

"We believe most Alabama Republicans realize that nominating Roy Moore would be gift wrapping this Senate seat for Chuck Schumer," said SLF communications director Jack Pandol. "It remains to be seen whether Moore can escape his baggage without his candidacy collapsing under its own weight, regardless of what groups on the outside do."

There will be plenty of other candidates for Alabama voters to choose from, including possibly Sessions, who hasn't ruled out a comeback bid after being ousted from the Department of Justice. Rep. Bradley Byrne, Alabama Secretary of State John Merrill and former Auburn head football coach Tommy Tuberville are among those already seeking the GOP nomination to take on Jones.

A Timeline Of Plot Twists And Bombshells: How We Got To Election Day In Alabama

The argument Moore intends to make seems to focus on the influence an anti-Moore group called Project Birmingham had on the election. The Washington Post broke the story about some of the group's controversial tactics, which included "creation of fake accounts to deliver misleading messages on Facebook" to help buoy Jones. It was similar to tactics Russians used to disrupt the 2016 presidential election, but this time it was Americans behind such a scheme, bankrolled by an Internet billionaire. Jones has decried the group's tactics and called for a federal investigation into them.

How 'Project Birmingham' Spread Misinformation In The 2017 Alabama Senate Election

How 'Project Birmingham' Spread Misinformation In The 2017 Alabama Senate Election

But even before those details emerged, Moore refused to concede the race and made unfounded allegations of voter fraud following his defeat that were roundly rejected in court.

Moore has long been a divisive figure in Alabama, even before the 2017 race. He had only narrowly won his judicial elections before and had been twice removed from the bench, first for refusing to remove a statue of the Ten Commandments he'd had erected in the state judiciary building. Later, he was reelected to the court, but then suspended after he ordered Alabama judges to ignore the U.S. Supreme Court's 2015 ruling that legalized same-sex marriage.