Accessibility links
Amid Black Lung Epidemic, Coal Mine Regulator: No New Silica Rules Needed A top mine safety regulator testified before Congress that no new regulations are needed to protect workers from deadly silica dust, despite an epidemic of advanced black lung disease. 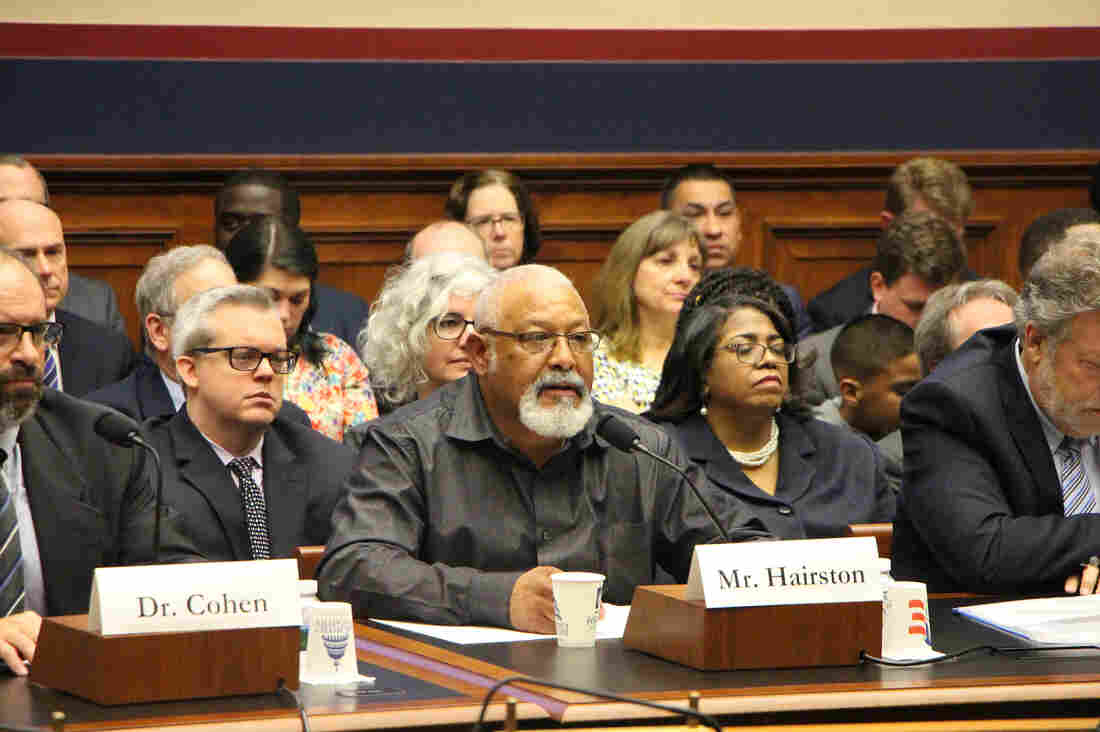 Gary Hairston, a coal miner for 27 years, spoke at the hearing. He has been diagnosed with progressive massive fibrosis, the advanced stage of black lung disease. House Committee on Education and Labor hide caption 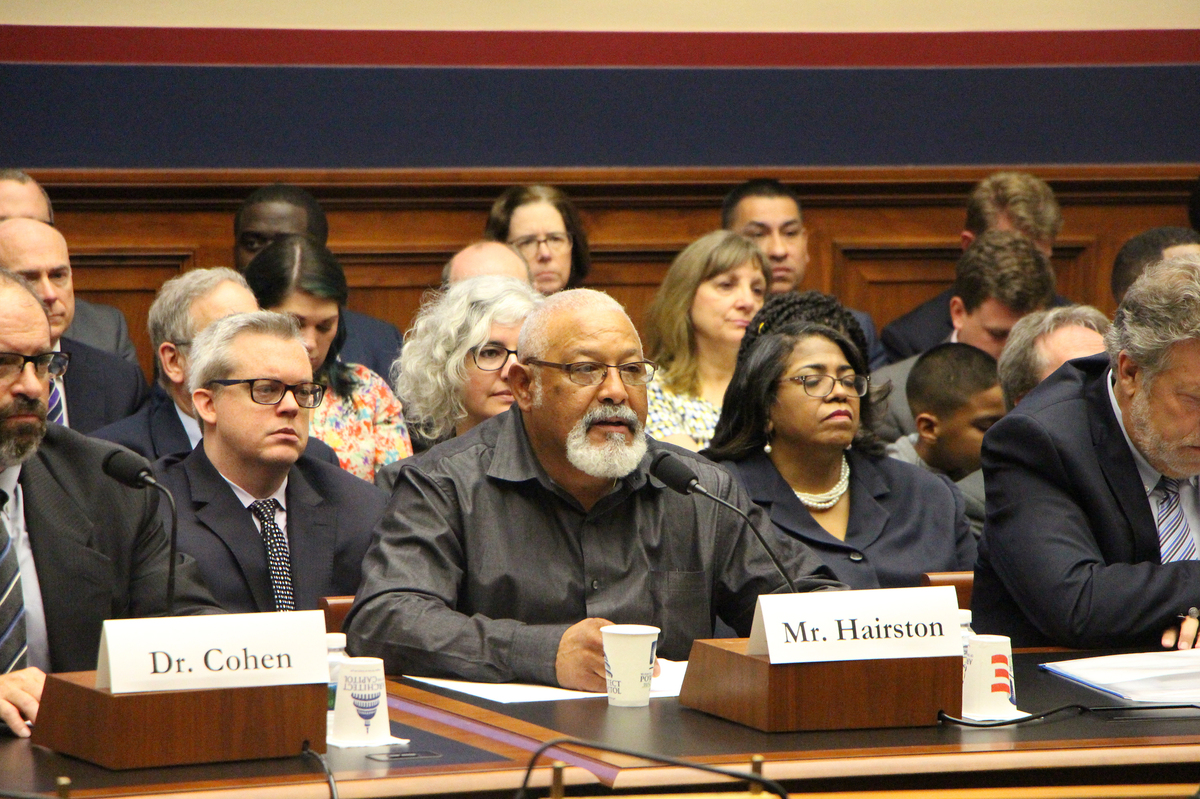 Gary Hairston, a coal miner for 27 years, spoke at the hearing. He has been diagnosed with progressive massive fibrosis, the advanced stage of black lung disease.

House Committee on Education and Labor

The nation's top coal mine safety regulator told members of Congress on Thursday that existing safety regulations are sufficient to protect miners from toxic dust, despite calls for change amid an epidemic of advanced black lung disease among coal miners in Appalachia.

He said his agency expects studies "will confirm that dramatic increases in sampling and compliance translate into reduced black lung incidents going forward."

This story was reported in collaboration with the PBS investigative series Frontline. The documentary Coal's Deadly Dust aired Jan. 22, 2019, on PBS. Watch it online now or check local listings.

But a pulmonologist who has spent decades studying the disease countered with the results of new studies suggesting the epidemic is not subsiding.

"The evidence shows that the case numbers are still rising," said Dr. Robert Cohen, director of the Mining Education and Research Center at the University of Illinois at Chicago.

"We don't have any evidence that that's plateauing or that's stopping," Dr. Cohen continued, noting that the current exposure rules, which took full effect in 2016, don't directly address silica. "We'd be doing a huge disservice to wait until we have another generation of miners with this disease."

The disagreement shows a continuing clash over an issue first uncovered by NPR in 2016. In a series of investigative reports, NPR identified more than 1,000 cases of advanced black lung disease in Appalachia — an outbreak that was 10 times more severe than regulators knew. And last year, NPR and the PBS program Frontline reported that records from Zatezalo's own agency showed that miners were exposed to dangerous levels of silica thousands of times in the last 30 years.

Cecil Roberts, president of the United Mine Workers of America, was blunt.

'I Figured It Was Going To Be A Horrible Death, And It Probably Will Be'

Roberts called on Zatezalo and his agency to enact new rules directly regulating silica dust in coal mines and cutting the exposure limit in half, which government researchers have recommended repeatedly since 1974.

A new study from the National Institute for Occupational Safety and Health found regulatory failure in its review of agency silica sampling and exposure data. And two other studies, of thousands of miner x-rays and tissue samples, found higher rates of silica-caused black lung disease in the last decade. Some of the x-rays are from miners who are still working today or who worked recently.

"We can anticipate that there are a group of people who are working right now who we will be having this conversation about five years from now and 10 years from now unless practices change," said Scott Laney, a NIOSH epidemiologist involved in the studies.

Laney spoke with NPR before Thursday's hearing and noted that the silica dust sampling conducted by the mine safety agency only occurs a fraction of the time miners are working. And the sampling misses episodes of high exposures, including the cutting of solid silica-bearing rock, often for months at a time, as mining companies try to reach new coal seams.

"We think that this is probably something that's happening with more frequency and it's producing more disease," Laney said.

Rep. Alma Adams, D-N.C., the chair of the subcommittee, asked Zatezalo why his agency doesn't adopt the same silica exposure limit that applies to all industries except mining. Those industries are regulated by the Occupational Safety and Health Administration (OSHA), which adopted a silica limit in 2016 that is twice as restrictive as the one used for mining.

Cecil Roberts, president of the United Mine Workers of America

Zatezalo said the average silica dust sample taken in coal mines today already beats the tougher OSHA limit. But according to an NPR analysis of MSHA inspection data, some dust measurements did exceed the OSHA standard.

"It's just absolutely nonsensical that that doesn't apply to miners as well," Dr. Cohen said. "Their workers are exposed to the same dust so I think that has to be done."

Rep Bobby Scott, D-Va., the chair of the House Committee on Education and Labor, called for congressional action.

"Today's hearing confirmed that the administration will not make the necessary changes to coal mine health standards," Scott said in a statement. "Given the clear research showing that today's silica standards are not sufficient to protect miners from the recent, unprecedented spike in the most severe forms of black lung disease, Congress has no choice but to take action on behalf of workers and their families."

The hearing also included Gary Hairston, a coal miner for 27 years who has been diagnosed with progressive massive fibrosis, the advanced stage of black lung disease. He was just 48, he said, when he began to have trouble breathing and working.

"I couldn't even play with my grandkids," Hairston said, tears forming in his eyes. "I never did think at this young age that I wouldn't be able to take care of my family."