Accessibility links
Lil Nas X's Debut Album, '7,' Is A Brief And Promising Post-Genre Experiment The internet native parlayed his brilliance for virality into a breakout career via the year's most indelible single, and its most unlikely cultural flashpoint. But that was then. 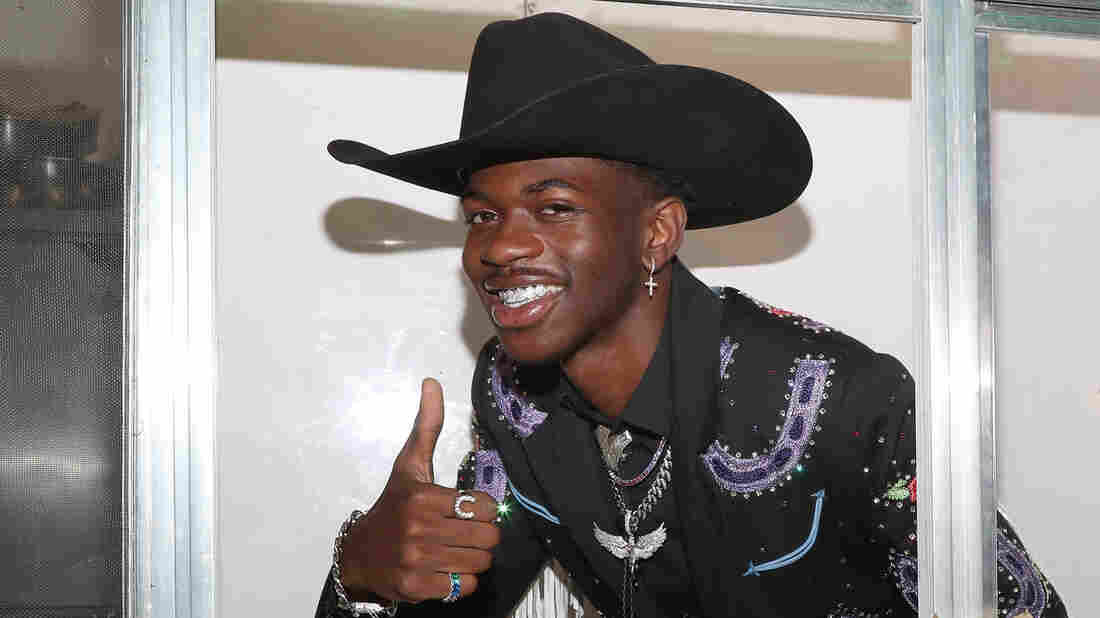 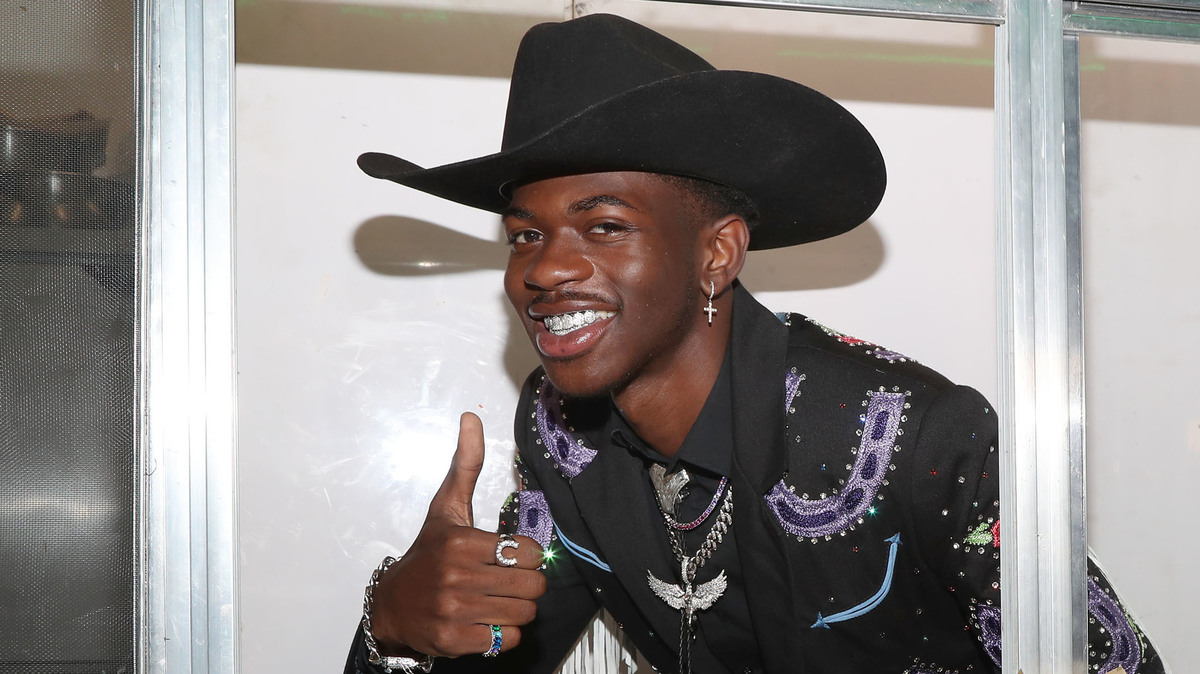 If you were the kind of person who spent time on the file-sharing platform LimeWire 12 years ago, there's a decent chance that, in attempting to download, say, Rihanna's "Umbrella" or Plain White T's "Hey There Delilah," you found yourself listening instead to a kid begging you to watch him "crank that Robocop." It wasn't a software glitch, it was Soulja Boy, the first internet troll to commandeer the pop charts. Back in 2007, the bored teenage rapper had stumbled on a loophole: by labeling the files for his debut single, "Crank That," with the titles of LimeWire's most popular downloads, he could effectively Trojan horse the song into thousands of unsuspecting hard drives. (It happened to me with Michael Jackson's "Thriller.") "Crank That" ended up spending seven weeks at No. 1 on the Billboard Hot 100 that year. A MySpace nerd from Batesville, Miss. was suddenly the most controversial rapper on the planet.

The moral of the story, you could say, is that in the digital landscape of the past decade-plus, being viral is worth more than being good. There's some truth to that, and Lil Nas X knows it better than anybody. Before he had "Old Town Road" — the country-trap juggernaut that's been the biggest song in the country for going on three months — the rapper/singer/troll extraordinaire appears to have run a Twitter account that manufactured viral content for clout. With firsthand knowledge of meme mechanics and a prefab fanbase from his Tweetdecking days, the teenager born Montero Lamar Hill in 1999 — the same spring Will Smith released "Wild Wild West," for whatever it's worth — knew exactly how to jury-rig a breakthrough hit. "Old Town Road" was short, eminently quotable, and arrived on the spurred heels of Western-themed survival game Red Dead Redemption 2 and the yeehaw agenda, a better version of Lil Tracy's twangy "Like A Farmer" months beforehand. Plus, it turned out, if you labeled your SoundCloud upload as "country" rather than "hip-hop," you had a way better chance of reaching the top of the streaming site's genre-specific charts. The more you know! 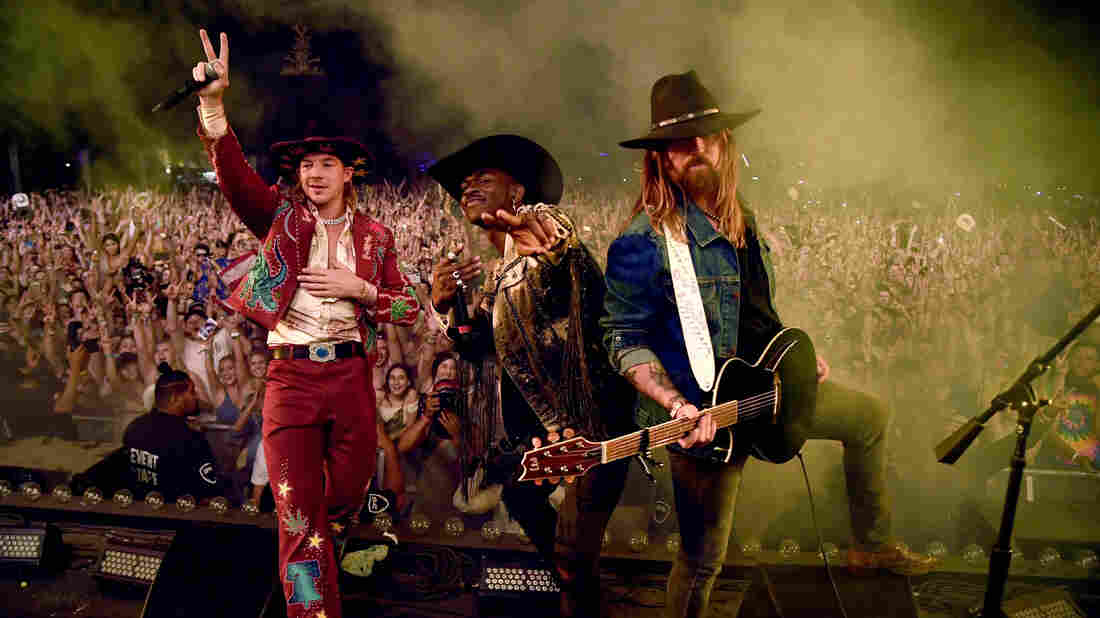 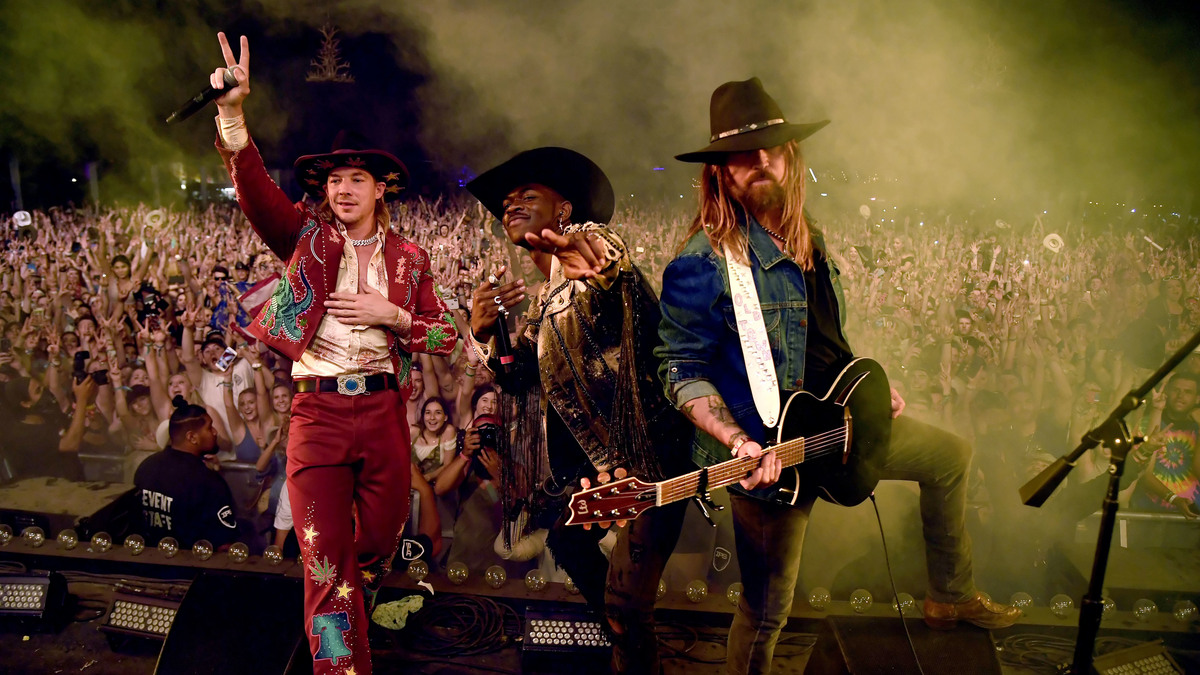 From left: Diplo, Lil Nas X and Billy Ray Cyrus onstage during the Stagecoach Festival in Indio, California on April 28, 2019.

If it's really that easy to troll your way to the top, expect the charts to be besieged by meme lords until whenever climate change takes us out. I suspect it's not so simple, though. The only way to concisely explain what's made "Old Town Road" the longest-reigning debut single since 1996's "Macarena" is to throw up your hands and say, "2019, man!" First, there was the beat from a Dutch teenager who threw trap drums over a sped-up Nine Inch Nails instrumental (with whom Nas X was unfamiliar), leased for $30 to sing about bullriding and boobies. Then the song's out-of-nowhere ubiquity on TikTok, a Chinese social video network, where the song soundtracked thousands of kids' adventures with yee-yee juice. After that came internet-breaking controversy over the song's removal from Billboard's Hot Country Songs chart, as much a righteous call-out of the country charts' racist gatekeeping habits as it was primo Discourse Machine fuel. And then the weirdly great Billy Ray Cyrus remix, and the Columbia Records deal, and the six-figure Wrangler partnership ("for the kind of modern cowboy that can't be put in a box")... and, finally, the exquisite schadenfreude of the biggest pop stars on the planet, including Drake and Taylor Swift, being denied the Hot 100's No. 1 spot for three months and counting thanks to a cowboy novelty song from a former Nicki Minaj stan account operator. Whether Lil Nas X is a country singer is one thing; his status as Gen Z's foremost cyberpunk is officially set in stone.

Which brings us to the real question: Can Lil Nas X's major label debut make good on any of this?

Frankly, I was inclined to say no before pressing play, expecting the 20-year old to ride the clickbait rodeo 'til he can't no more. But if the rise of "Old Town Road" suggested its fans might like memes more than music, 7 makes a solid case that Lil Nas X has the chops regardless. Considered separate from the "Old Town Road" hype cycle, the project's one of the better recent arguments for the "post-genre" era of pop. It's a hyphenate that critics use idealistically these days, as though transcending genre boundaries makes for inherently better music, even when oftentimes the results feel more like blending five hues of paint to end up with a nondescript beige.

But what's compelling about Nas X's range of styles across 7 is how specific his points of reference are, from dour grunge to bratty pop-punk to bright, maximalist electronics. The bizarrely charming "Panini" channels a Rae Sremmurd cover of Nirvana we never knew we needed. (The grunge band's '91 hit "In Bloom" actually gets a sample credit here, and Nas shouted out Francis Bean Cobain on Twitter yesterday, presumably for help in the clearance process.) "Kick It" takes Travis Scott-style vocal modulation to its uncanniest extreme, complete with string arrangements and a beat that sounds like Hudson Mohawke recording in a gothic monastery. The weirdly poignant "C7osure (You Like)" is a house ballad filtered through an emo-rap lens, with a four-on-the-floor beat by frequent Drake collaborator Boi-1da.

And if you'd only been played "Bring U Down" and "F9mily (You & Me)" — featuring, respectively, OneRepublic's Ryan Tedder and Blink-182's Travis Barker — you'd have no reason to call Lil Nas X anything other than a rockstar. His cartoon cowboy drawl was endearing in its goofiness (it returns on "Rodeo," an outlaw banger with Cardi B that might hold up better than "Old Town Road" in the long haul). But it turns out his deep voice and unshowy melodies work even better as an alt-rock frontman, albeit one who draws from the vocal techniques of Young Thug and Makonnen. These are all savvy moves, to be sure: "y'all think they gone let me on the rock charts???!" he slyly captioned a preview of "Bring U Down," karaoke-ing into the camera, "I notice you winning and I got nothing to lose!" But these are songs that can stand on their own, regardless of whatever future controversy they may court, unified not by gimmicks but by Nas X's unflinching charisma. They might not give much of a clear idea as to what kind of artist the year's biggest breakout star really is, but maybe the point is: Why should they?

Already, rappers are using "Old Town Road" as a map for insta-fame. Among the top 20 songs currently on SoundCloud's country chart, 13 would've been unequivocally considered rap songs four months ago. (The Billy Ray Cyrus remix and the original "Old Town Road" are still the top two by tens of millions of plays; at No. 3 is Blanco Brown's "The Git Up," a fellow TikTok hit and unabashed country-trap grift.) I'm sure if Lil Nas X wanted to, he could engineer another viral sensation — maybe for his next act he'd be a fishing boat captain, sending sea shanties with trap drums up the SoundCloud charts. For the moment, though, I'm glad to have the fun, fascinating songs on 7 as an antidote to any creeping jadedness over music's memeification, which didn't start with Lil Nas X and won't nearly end with him. An addendum to that lesson from Soulja Boy: Being viral may be worth more than being good, but who's to say you can't be both?