Accessibility links
In NPR Interview, Iran's Ambassador To U.N. Defends Shooting Down Drone In an interview with NPR, Majid Takht Ravanchi also denied responsibility for the attack on two tankers last week and steadfastly maintained that Iran is not interested in war. 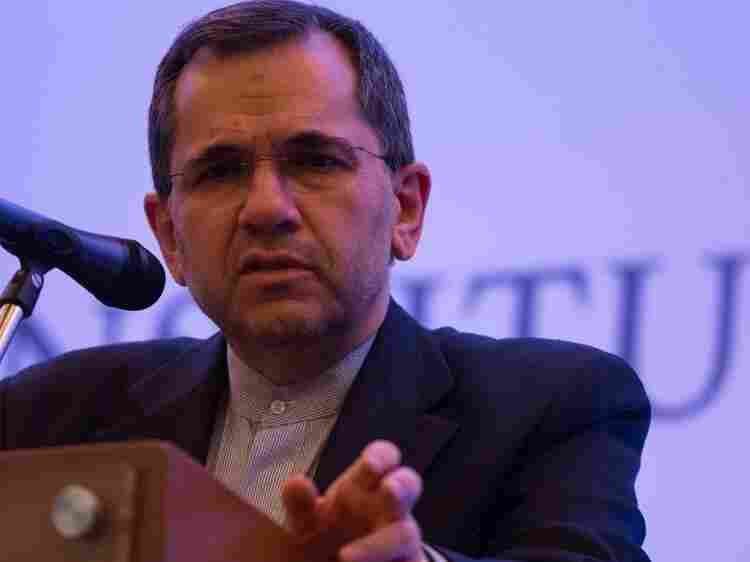 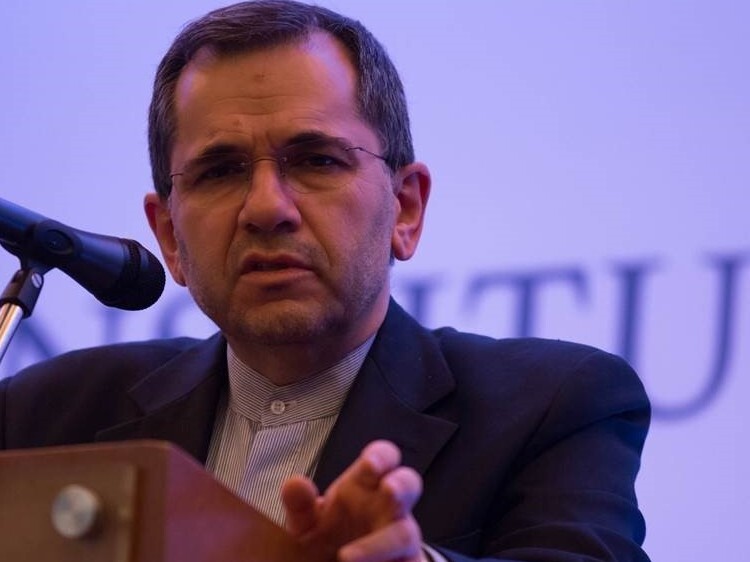 Majid Takht Ravanchi, Iran's ambassador to the United Nations, pictured here in 2015 at a news conference in Mexico City. In an exclusive interview with NPR, Ravanchi said flaring tensions between Washington and Tehran have made diplomatic talks hostile.

Iran's ambassador to the United Nations is defending shooting down a U.S. surveillance drone over the Strait of Hormuz and says Tehran will not be forced back into negotiations with the White House.

"You cannot negotiate with somebody who has a knife in his hand putting the knife under your throat," Majid Takht Ravanchi, Iran's ambassador to the United Nations, said in an exclusive interview with NPR. "That cannot be acceptable by anybody. Any reasonable person cannot accept to have negotiations with somebody who is threatening you."

Trump Says, 'You'll Soon Find Out' If U.S. Will Strike, After Iran Shoots Down Drone

In the 20-minute sit-down interview with Steve Inskeep, host of NPR's Morning Edition, Ravanchi also denied responsibility for an attack on two oil tankers last week and steadfastly maintained that Iran is not interested in war, only in protecting its borders from what it sees as illegal intrusions.

Ravanchi accused American leaders of unleashing "economic warfare" against Iran in attempting to isolate the country and forcing it back to the negotiating table.

Yet forging common ground, Ravanchi argued, is squarely within the power of the U.S.

'We were left with no option'

Ravanchi's interview with NPR comes the same day President Trump blamed "someone loose and stupid" in Iran for shooting down a naval surveillance drone with a 131-foot wingspan in the Strait of Hormuz, the latest flashpoint in a growing rift between the two countries.

After news of the downed unmanned aircraft, Trump called for an emergency meeting with congressional leaders. U.S. Central Command said the event was an "unprovoked attack" over international waters.

The RQ-4 Global Hawk, which he described as a "spy drone," was flying above the Persian Gulf close to the border with Iran.

"And then we noticed that that drone is getting close to our airspace," Ravanchi said.

He said unsuccessful attempts were made by radio to communicate with the drone to warn it away from Iranian airspace.

"And all of a sudden, we noticed that it was entering our airspace," he said. "At that time since it was a spy drone, [we] were left with no other option," he said. "Just to shoot it down," he said.

Iran was acting in accordance with Article 51 of the U.N. Charter, a provision allowing military action in situations involving self-defense, he said.

Iran and U.S. have provided competing locations for where exactly the drone was targeted, Iran's coordinates placing it over the country's waters and the coordinates provided by Pentagon officials showing it fell in international airspace.

Since the drone was shot down, Iranian officials have recovered portions of the aircraft that "naturally fell down within territorial waters of the Islamic Republic of Iran," Ravanchi said.

"So that shows, by itself, that the drone was shot down within the Iranian airspace," he said.

Hours after the incident, Trump responded, tweeting: "Iran made a very big mistake!"

Answering reporters' questions as to whether he would order a retaliation for downing the drone, the president responded: "You'll soon find out."

The Trump administration pulled out of the 2015 Iran nuclear deal a year ago, saying the agreement was not strong enough. Instead, the White House imposed stiff economic sanctions on Tehran and U.S. officials pressed other countries to stop buying Iranian oil.

President Trump has made it clear that he will not allow Iran to develop a nuclear weapon, though this week the country announced it would exceed the limit it had agreed to in the 2015 nuclear deal.

'We are not seeking war'

Asked whether Iran is trying to move toward a confrontation with the U.S., Ravanchi said, "Definitely not."

Ravanchi said in a war with Iran, there would be no winners or losers. Instead, it would be a "hell, which will be felt by everybody."

Nonetheless, he said, Iran needs to be prepared to defend the country's "territorial integrity" at sea, in air and on the land "against any intrusion by the U.S., or any other country," echoing a letter he wrote today to the U.N. secretary-general and the Security Council making the case that his country has a right to self-defense. In the letter, Ravanchi said that the U.S. had committed a "very dangerous and provocative act," by veering into Iranian territory, something he said was a "blatant violation of international law."

Last week, two tankers were attacked in the Gulf of Oman, an episode the U.S. has blamed on Iran. Tehran has denied involvement.

Speaking to NPR about those attacks, Ravanchi amplified Iran's position, saying it appears to be a "very suspicious action."

The U.S. has released video that it says shows an Iranian Revolutionary Guard vessel alongside one of the stricken tankers as its crew removes an unexploded limpet mine in an effort to hide Iran's role in the attack. Tehran has denied any such action.

"We have to find out who was responsible for this act," he said.

The beginning of increased tensions with the U.S. began when Trump last year pulled out of the 2015 nuclear deal, which Ravanchi helped negotiate. America's withdrawal from the accord was opposed by other signatories to the agreement, including China, Russia and America's European allies.

That was the moment when, he said, "the whole mess in our region started."

A series of actions, including pushing the international community to boycott Iran and classifying Iran's Revolutionary Guard as a terrorist organization, are proof, he said that "the U.S. is trying to intimidate Iran" into negotiating under terms favorable to the Washington.

Ravanchi said the future of relations is in the hands of top U.S. officials, who he portrays as leading an aggressive crusade against Iran to coerce the country into its bidding.

The United States has "started a military campaign against Iran," he said. "The U.S. has started economic warfare, which we call economic terrorism against Iran. So as soon as the U.S. changes course, I think we will be in a much better situation than what we have today."

Previously posted June 24: In a previous version of this story, Majid Takht Ravanchi's last name was incorrectly spelled Ravanichi in some references.