Accessibility links
Immigration: Acting ICE Director Defends Planned Roundups Targeting Families In an interview with NPR, Acting ICE Director Mark Morgan says his agency is only enforcing the law. "So what are our options?" he asked. "They've had due process." 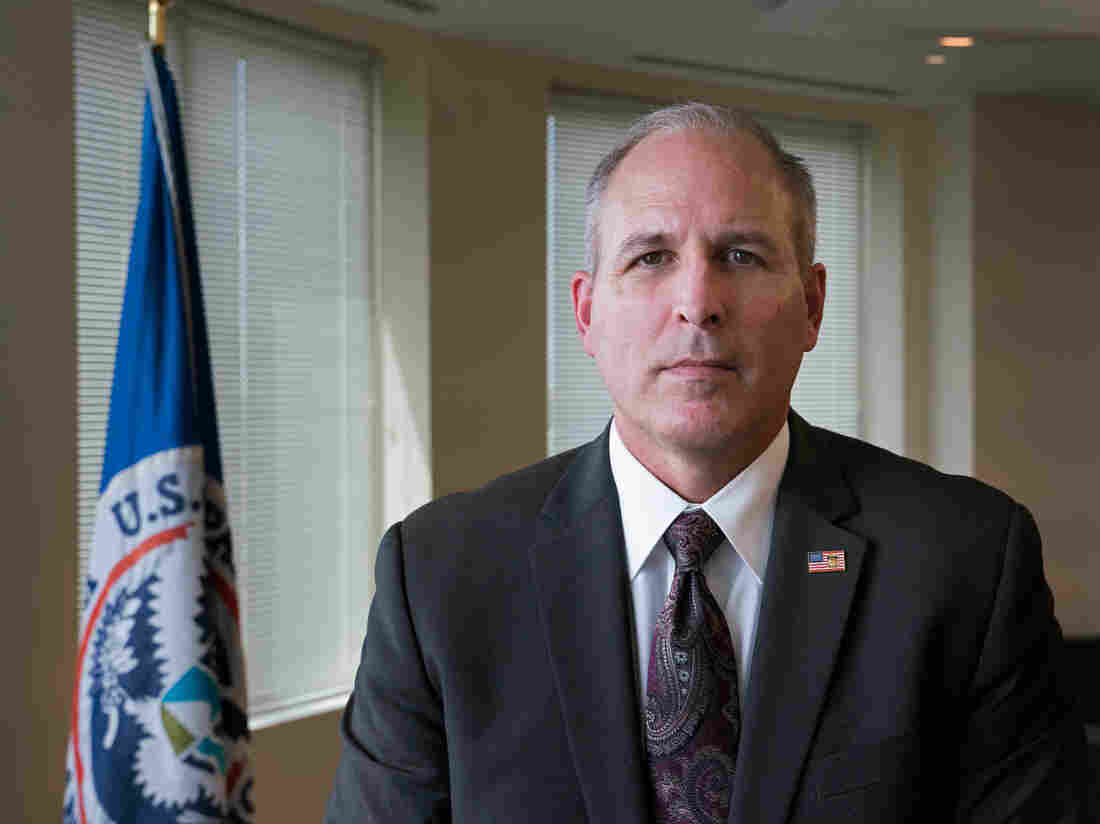 Mark Morgan, the acting head of Immigration and Customs Enforcement, stands for a portrait in his office Friday. In an interview with NPR, Morgan says his agency is only enforcing the law. Shuran Huang/NPR hide caption 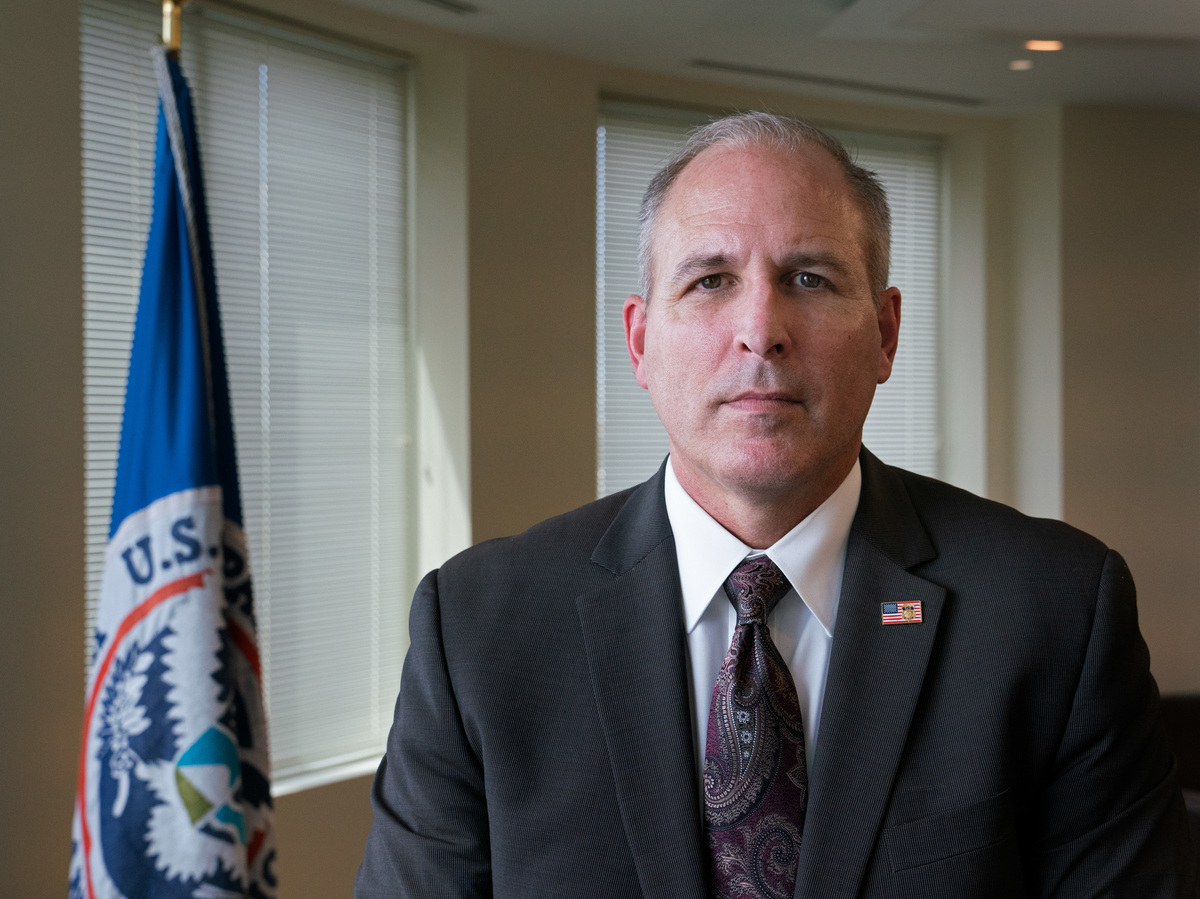 Mark Morgan, the acting head of Immigration and Customs Enforcement, stands for a portrait in his office Friday. In an interview with NPR, Morgan says his agency is only enforcing the law.

U.S. Immigration and Customs Enforcement is expected to begin arresting and deporting thousands of migrant families in 10 cities across the country, according to sources familiar with the planned raids.

The roundups are targeted at recently arrived migrant families whose cases were fast-tracked by the Justice Department after being sent final deportation orders from a judge and failing to show up for court.

Sources said the raids were expected to begin this weekend, but on Saturday President Trump tweeted that he was delaying the action for two weeks. If Democrats do not approve changes to asylum law, Trump wrote, the raids will resume.

Acting ICE Director Mark Morgan defended ICE raids aimed at migrant families in an interview with NPR on Friday, saying his agency is only enforcing the law.

ICE sent letters to more than 2,000 of these migrants in February, demanding that they report to immigration authorities or leave the country. Morgan said many are not turning themselves in.

The decision to make families a priority for deportation sparked condemnation from immigrant rights groups. They say these families may not have understood their rights in court or never received proper notification to appear.

"This is an immoral and unconscionable act by a president and an administration hell-bent on dividing our country," James said in a statement. "As New York's top law enforcement officer, I can assure New Yorkers we will do everything in our power to fight back against these inhumane policies."

The families' cases were placed at the front of the line in an expedited process developed by the Trump administration, known as "the rocket docket," an effort to deter migrant families hoping to come to the U.S. and seek asylum.

The majority of the migrants who have received final orders of removal — more than 10,000 people — have received "in absentia" orders from federal court officials for not showing up to court.

Migrant advocates said the raids targeting families are likely to prompt a widespread outcry. They point to last year when the Trump administration separated thousands of children from their families as a part of Trump's "zero tolerance" immigration stance. After the uproar, the administration reversed the practice.

"This is a new low," Steven Choi, executive director the New York Immigration Coalition, said in a statement. "In the wake of his official campaign launch, the Trump administration this week has tried to ratchet up its racist anti-immigrant rhetoric and threats of his terrorizing deportation force."

President Trump named Morgan the head of Immigration and Customs Enforcement last month. For Morgan, leading the agency followed a long career working in homeland security and criminal investigations, first as an agent for the FBI for decades before serving as the Border Patrol chief at the end of the Obama administration.

In the interview with NPR, Morgan echoed Trump's hardline immigration rhetoric and the desire to discourage families from crossing the border illegally.

"By doing this we're going to send the message to these individuals," Morgan said. "We want to stop them from paying the cartels and making them a billion-dollar industry and risking their lives. We want to also send that message, if you want to come here, please do so legally. Don't risk your life."

In May alone, more than 144,000 immigrants were taken into custody along the U.S.-Mexico border, the highest one-month total in more than a decade. Many of the migrants are escaping violence and poverty in Central America.

Morgan said raids are not his preference because they can be dangerous and unpredictable for agents. But with so many migrants living in the shadows and dodging requests from ICE, he said it is an appropriate response.

President Trump tweeted earlier this week about the ICE operation, saying it will be next week. Morgan said that did not compromise the operations, which are usually not publicized beforehand.

"You've got to remember all these individuals know every single day they're here illegally. They're always watching. Anytime a car goes by, they're always in a heightened state of awareness," Morgan said. "The tweet was just a general tweet. There's no operational specific elements that we're giving out."

NPR's Franco Ordoñez and Joel Rose contributed to this report.