Accessibility links
Forced To Demolish Their Own Homes, Syrian Refugees In Lebanon Seek New Shelter Lebanon requires refugees to live in shelters made of canvas or wood. A new military decree directs them to demolish concrete walls over 3 feet high by July 1. Many don't know where they'll live next. 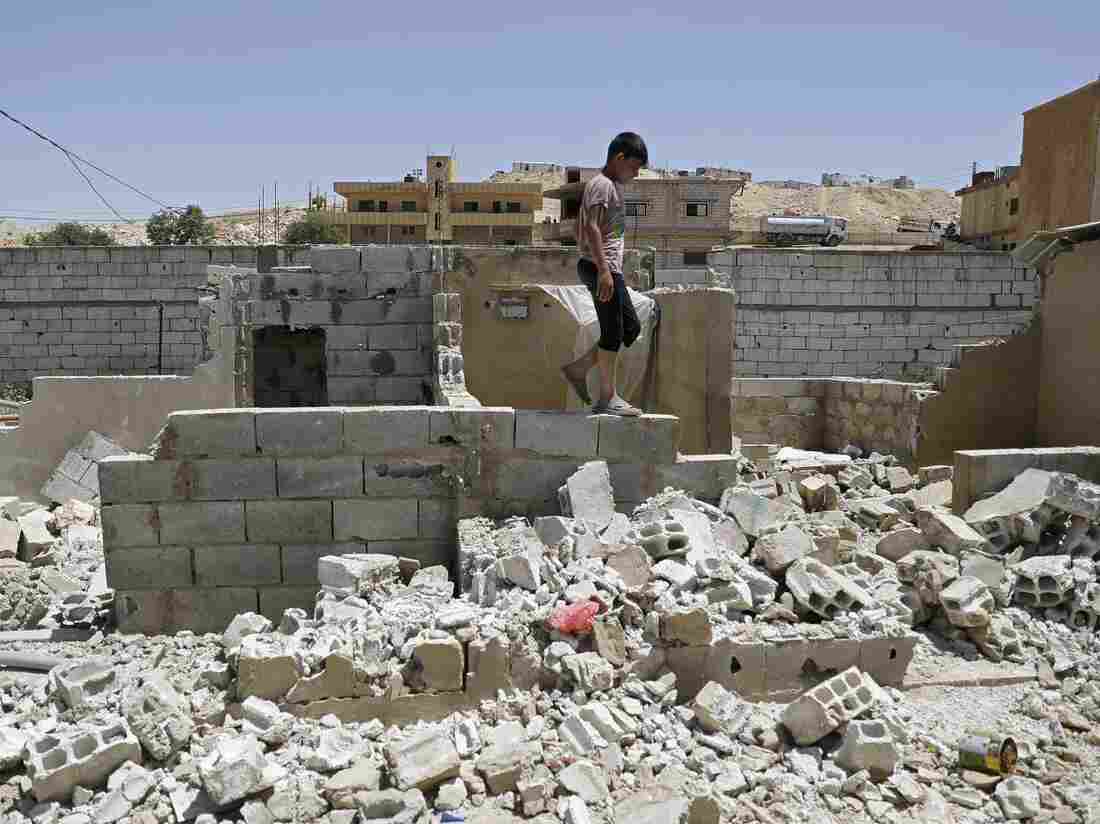 A Syrian boy walks among demolished shelters at a refugee camp in the northeastern Lebanese town of Arsal, in Lebanon's Bekaa valley, on June 10. Joseph Eid/AFP/Getty Images hide caption 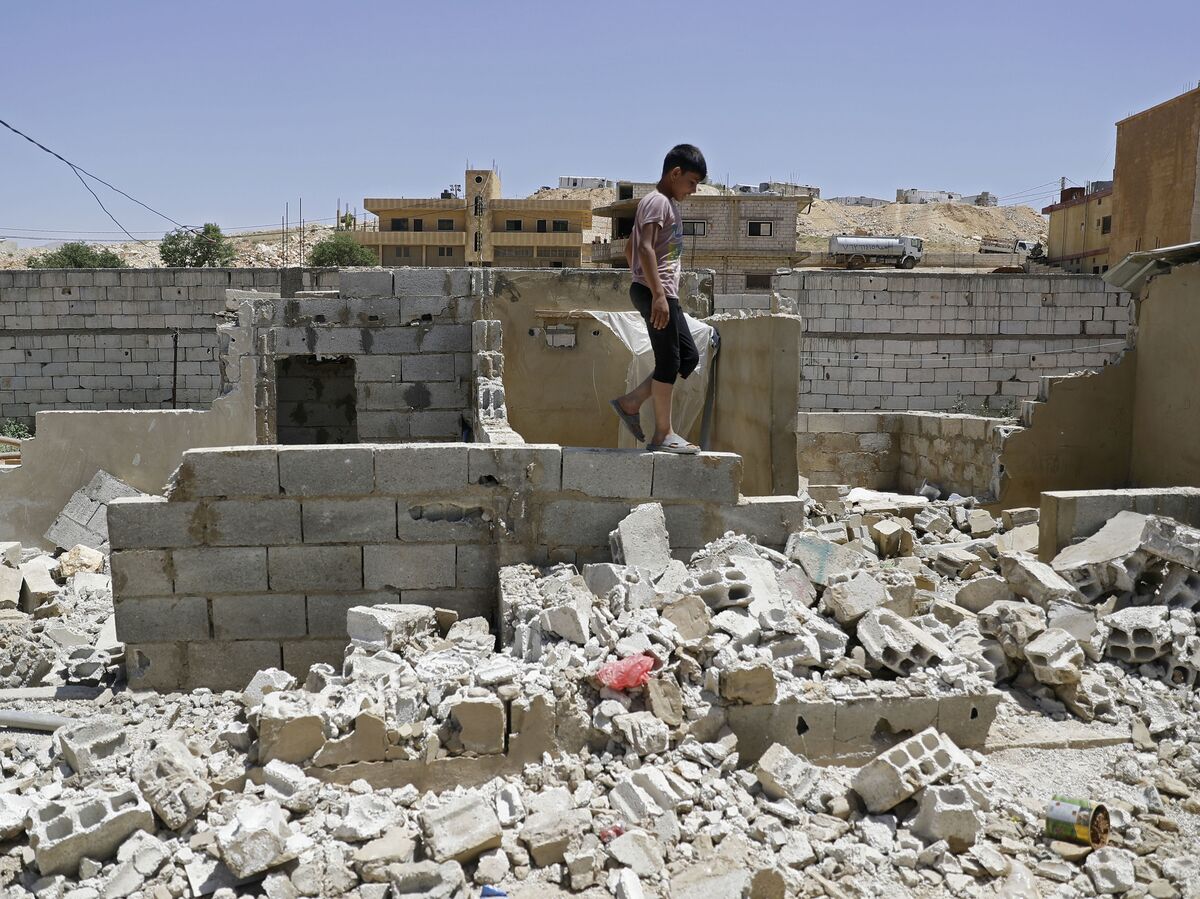 A Syrian boy walks among demolished shelters at a refugee camp in the northeastern Lebanese town of Arsal, in Lebanon's Bekaa valley, on June 10.

In the northeastern Lebanese city of Arsal, near the Syrian border, young boys stand in the blistering June heat, swinging sledgehammers to knock down simple structures made of concrete breeze blocks. Some of the children are as young as 8 years old. They're helping the adults reduce the walls to rubble.

The structures they're demolishing are their own homes, in a camp that shelters 23 Syrian families.

"I built this house with my own hands, and I'm now destroying it with my own hands," says Ahmed Jumaa, who, along with 14 family members, fled to Lebanon from Syria six years ago. Since then, they've been living in the house he built in the al-Aman refugee camp. Now it's gone.

Zeina Rahal, his sister-in-law, breaks down in tears as she points to the skeleton of a home, which was emptied ahead of the demolition. Their possessions lie in a heap to one side.

"It's all a mess," she shouts in anguish. "Look at our stuff; look at our furniture. We've been here for several years ... where are we going to go now?"

Lebanon hosts more than 1 million Syrian refugees and only allows them to build shelters made of canvas and wood. But the laws have not been clearly stated. The government doesn't permit the establishment of formal refugee camps. So instead, many refugees live in informal settlements, in makeshift homes, some of which have grown over time into more durable homes with breeze-block walls. 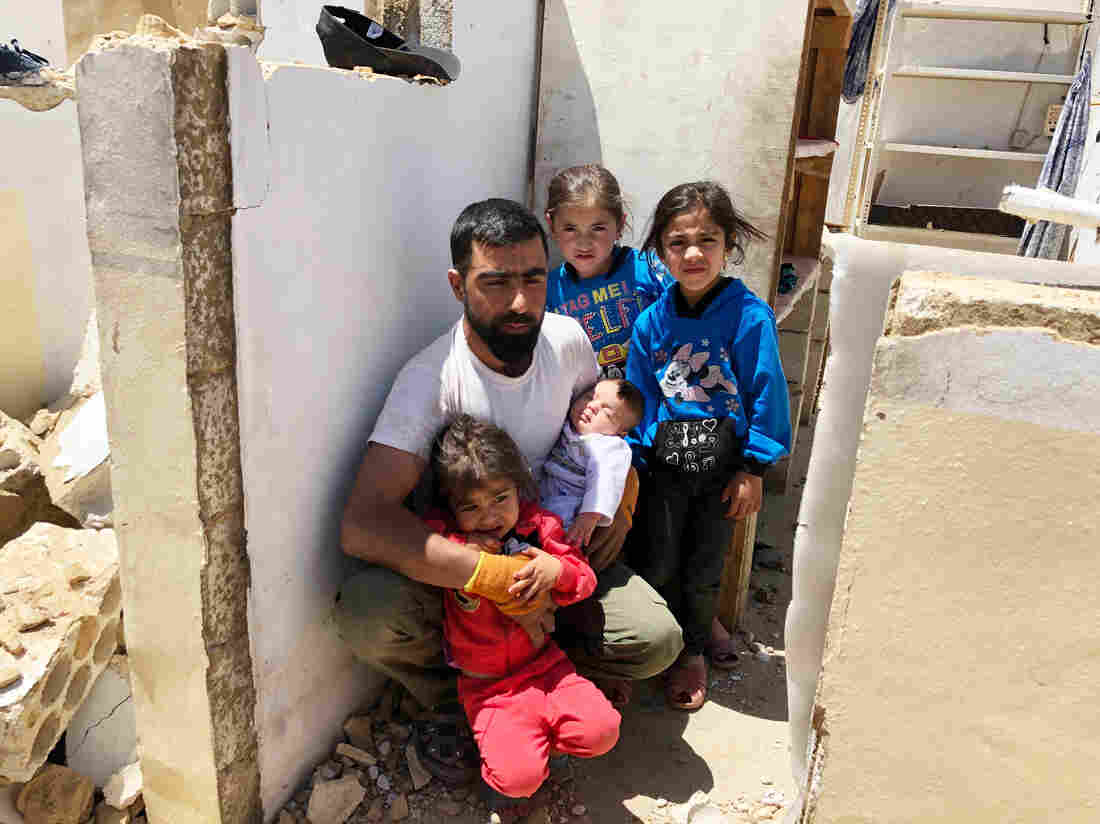 Ahmed Jumaa with his three children and niece. He and 14 family members fled to Lebanon from Syria six years ago. "I built this house with my own hands, and I'm now destroying it with my own hands," he says. Lama Al-Arian/NPR hide caption 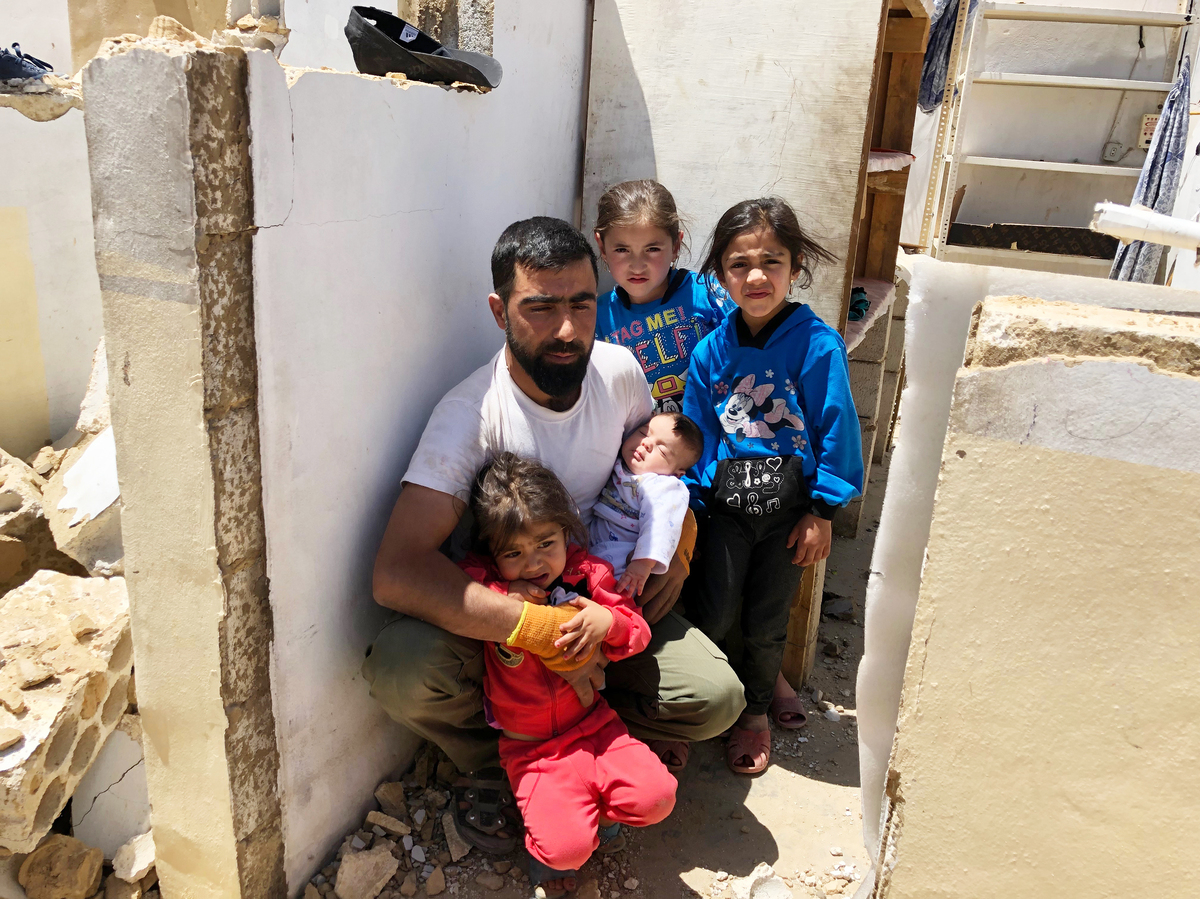 A military decree issued in April now requires the refugees to demolish any concrete walls over 1 meter — about 3 feet — high. The military has given the refugees until July 1 to comply, or else authorities will come in and knock down the structures themselves.

But the fear among refugees is that if they leave it to the military to enforce the demolitions, the entire camp, along with their belongings, will be razed. And so they're going about the grim task of destroying the homes they have built.

"Why would I keep my belongings and my children in the house and let the house be knocked down on top of my kids and things?" Jumaa says.

Most of the Syrians have no alternative place for shelter, and it's unclear where thousands of them will go after their homes are destroyed.

The sudden ruling has left aid agencies scrambling to procure tents for those who will be left without homes. According to Save the Children, this military decree has affected more than 5,000 Syrian families, and as many as 15,000 Syrian children now face homelessness.

Abu Hussein, a former real estate agent in Syria, shows NPR his home in the al-Aman camp, where mattresses, blankets, teacups and clothes lie on the ground, surrounded by piles of broken concrete. He spent the night before knocking down all the breeze blocks over a meter high — except one wall.

He plans to negotiate with the authorities, hoping he can keep this wall to protect the privacy of the women in the home when they shower.

"They should consider our circumstances a little. If we knocked this down and women went in to shower, people would see them. We have to shower and eat and drink and sleep in this one tent. ... We need a solution that works for us and that is in line with the law. But we cannot humiliate ourselves," he says.

Lebanese authorities say the move to rid the camps of concrete structures over a meter high is intended to stop Syrian refugees from settling in Lebanon permanently. But many Syrians say they have no desire to stay in Lebanon forever anyway. 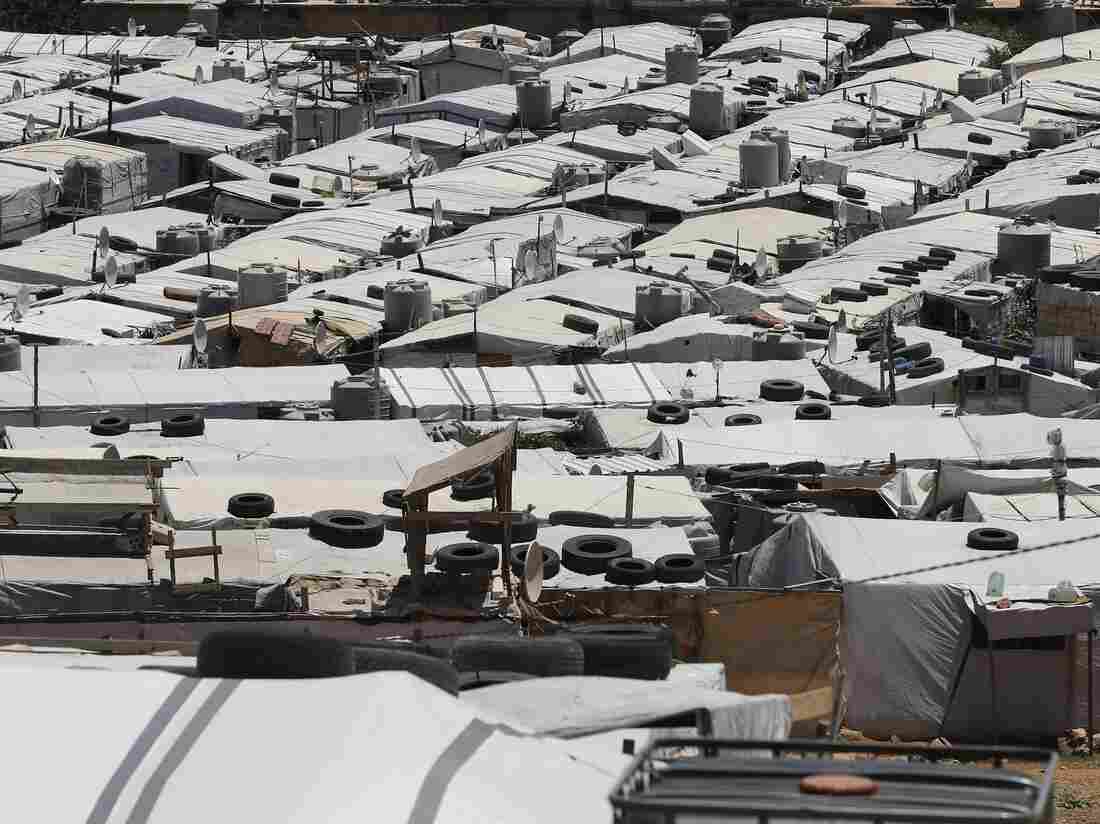 The sprawling Al-Nour camp in the northeastern Lebanese town of Arsal, in the Bekaa valley, near the border with Syria. Joseph Eid/AFP/Getty Images hide caption 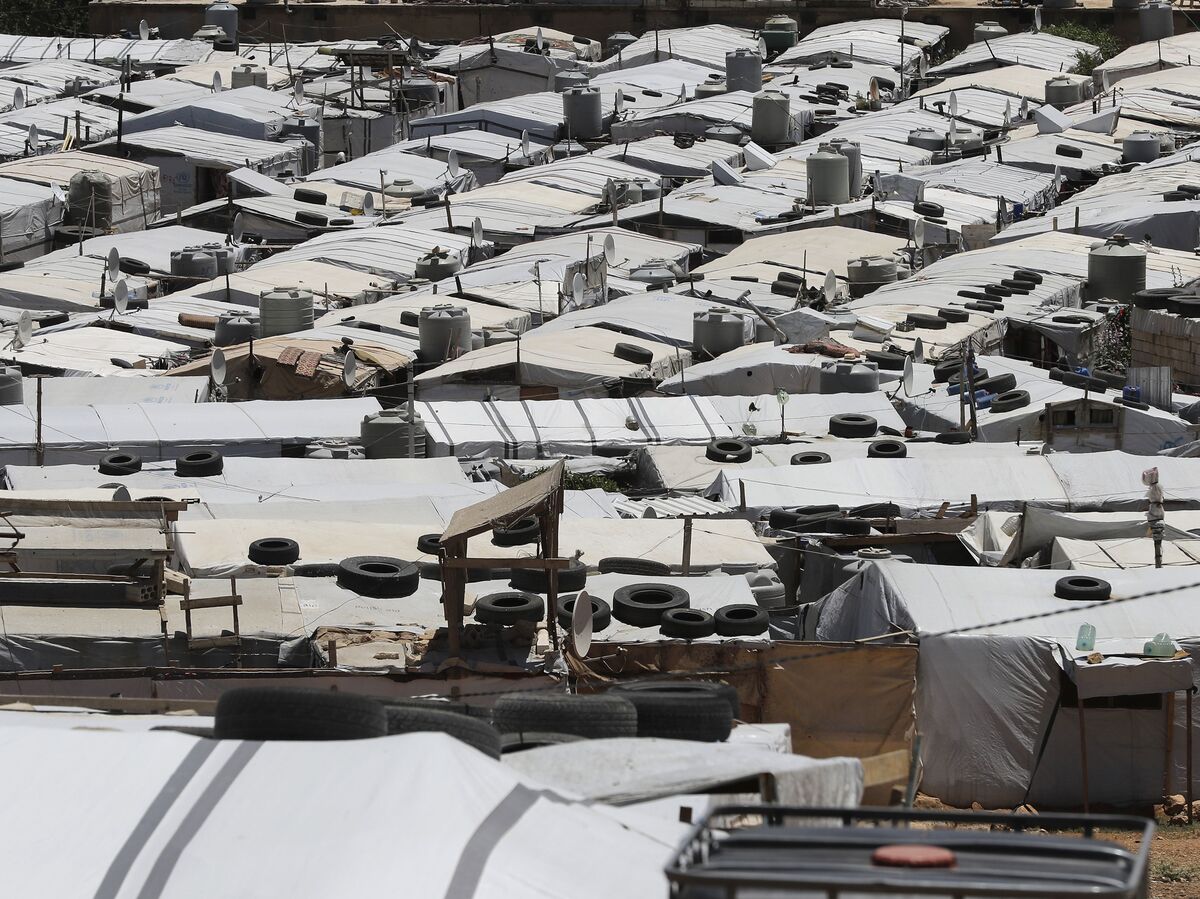 The sprawling Al-Nour camp in the northeastern Lebanese town of Arsal, in the Bekaa valley, near the border with Syria.

Bassel Houjeiry, Arsal's mayor, acknowledges that the influx of Syrian refugees into Lebanon has put pressure on the country's already-weak infrastructure. But he sees this recent military decree as a politically motivated decision. He sympathizes with the refugees.

Arsal has suffered many hardships, including a high rate of unemployment and an informal economy that relies on drug and weapons smuggling. The presence of 6,000 refugee families has caused more pressure, Houjeiry says.

But, he notes, "If the cause is to fix the Lebanese economy, even if all the Syrians were deported back, we'd still have the same problems because they existed before Syrians. It's not about the security or the economic situation, it's a political decision, on a certain level, and the people paying the price are the Syrian refugees."

Lisa Abou Khaled, a spokesperson for the U.N. Refugee Agency, says this decision has created immense pressure on the organization to quickly respond to refugee needs.

"We don't have enough materials, wood and tarp, to give all the families in need at the moment. Shelter is our least-funded sector," she says.

While some refugees are allowed to stay in some camps around Arsal if they comply with the "one-meter" law, there are other camps where Syrians are told by the government that they must completely evacuate by July 1.

Joelle Bassoul from Save the Children tells NPR that this decision by the military is affecting the most vulnerable, including thousands of women and children, who are already suffering the psychological impact of war.

"They saw their homes destroyed in Syria, and now it's happening again in Lebanon," Bassoul says. "These people have nowhere to go. We don't know what will happen. They might just start carrying their mattresses through the streets."

NPR visited another camp in Arsal, the Al Salam camp, 24 hours after the refugees — around 36 families, including more than 100 children — were ordered to leave. The shaweesh, or head, of the camp, 51-year-old Ahmed Shella, points to the surrounding mountains in Syria, home to the city of al-Qusayr, where most of the camp's residents came from.

"This decision won't force them to go back. It's just not safe there," Shella says. "But they told us the refugee camp will be knocked down and everyone must sort themselves out, and people have been searching for years and no one can find a house they can afford. They have nowhere to go. No one has been able to eat since the news came."

Iman Rabieh, a mother of two young boys, says her husband has been gone all morning, asking acquaintances around Arsal for housing. 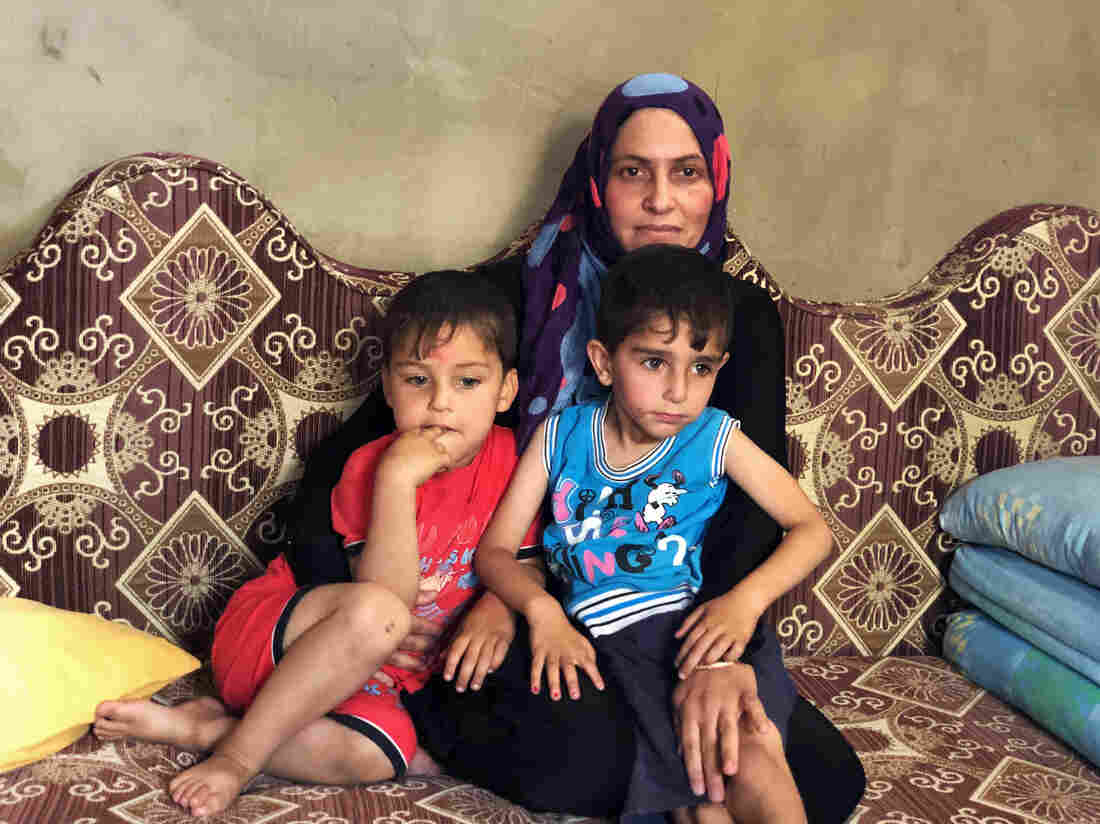 Iman Rabieh and her two boys sit in their home a few weeks before they must evacuate it. "I have no idea where we will go," she says. Lama Al-Arian/NPR hide caption 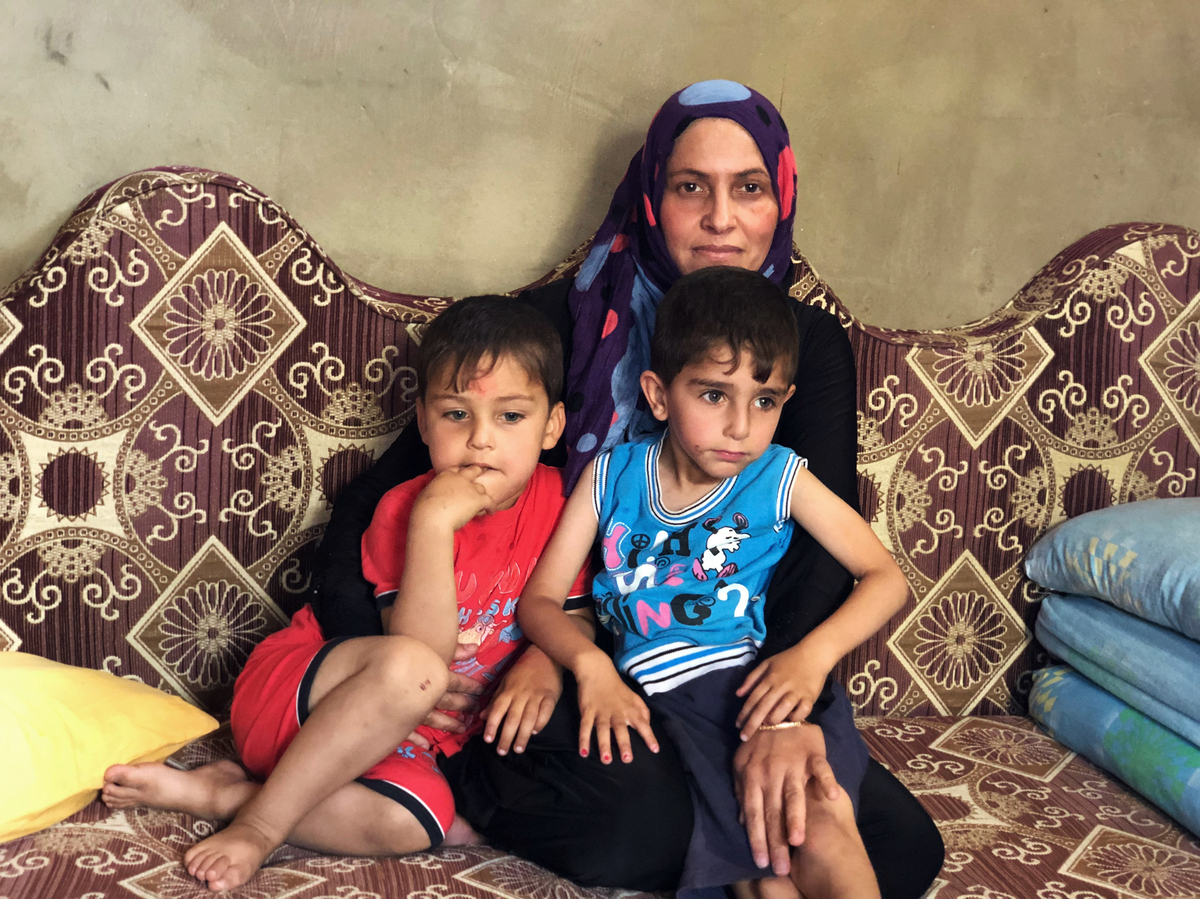 Iman Rabieh and her two boys sit in their home a few weeks before they must evacuate it. "I have no idea where we will go," she says.

Speaking to NPR in her simple concrete home, which has purple mats on the floor and clothes hung along the walls, she says she hasn't been able to sleep the entire night. As her children watch, unsure of how to comfort their mother, she breaks down in tears, recalling living among the bombs in Syria.

"We were just sitting there," she recalls, "and then suddenly, a mortar just comes. You fear for your children. We were living in the middle of fighting in Syria, and we didn't leave. But then we were getting hit, and we didn't know from which direction it was even coming from."

Rabieh says she fled to Lebanon with her family almost five years ago, leaving her dreams behind in Syria.

"I was a university student, and I never got to complete my education. I never got to graduate, and my whole future is lost just like that," she says. "I have no idea where we will go."

Rabieh says she would go home in a heartbeat if she felt Syria was safe enough.

"People are saying these are settlements ... but is it really these four walls that will have us settle here?"

For Rabieh, home means much more than a simple concrete structure.