Accessibility links
LGBTQ Pride: North Carolina Town Holds Its First Pride Celebration Organizer Laura Bannister says no one should have to leave their community to celebrate Pride. Despite some resistance from the community, the city was overwhelmed by the turnout. 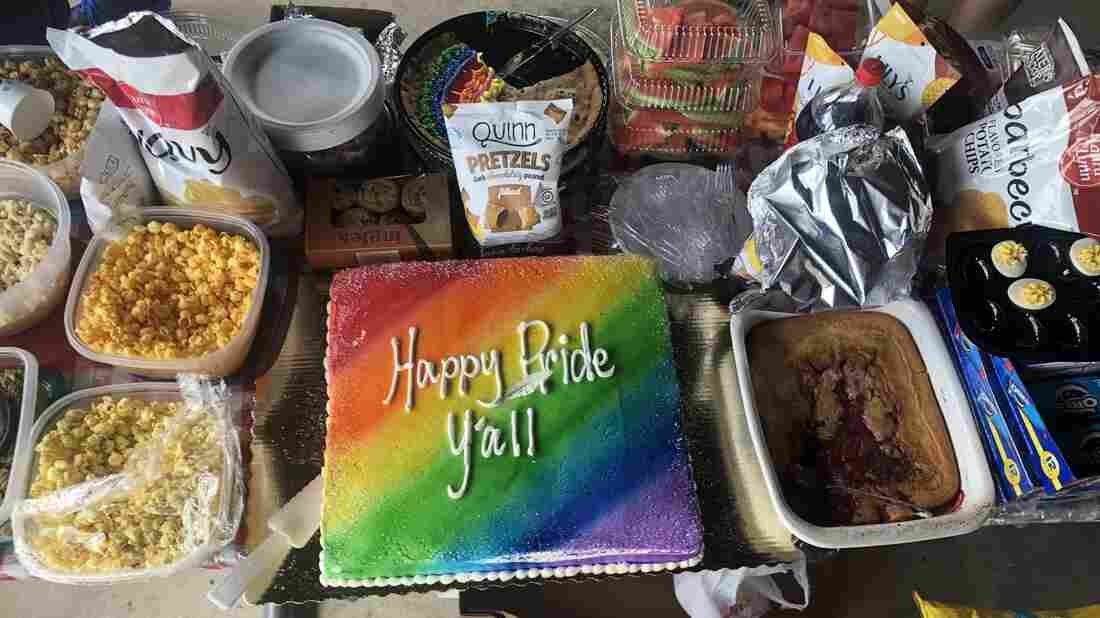 Attendees brought a range of picnic fare to the Hendersonville Pride potluck, including a strawberry cobbler, deviled eggs, watermelon and a rainbow cake that reads "Happy Pride Y'all." Monique LaBorde for NPR hide caption 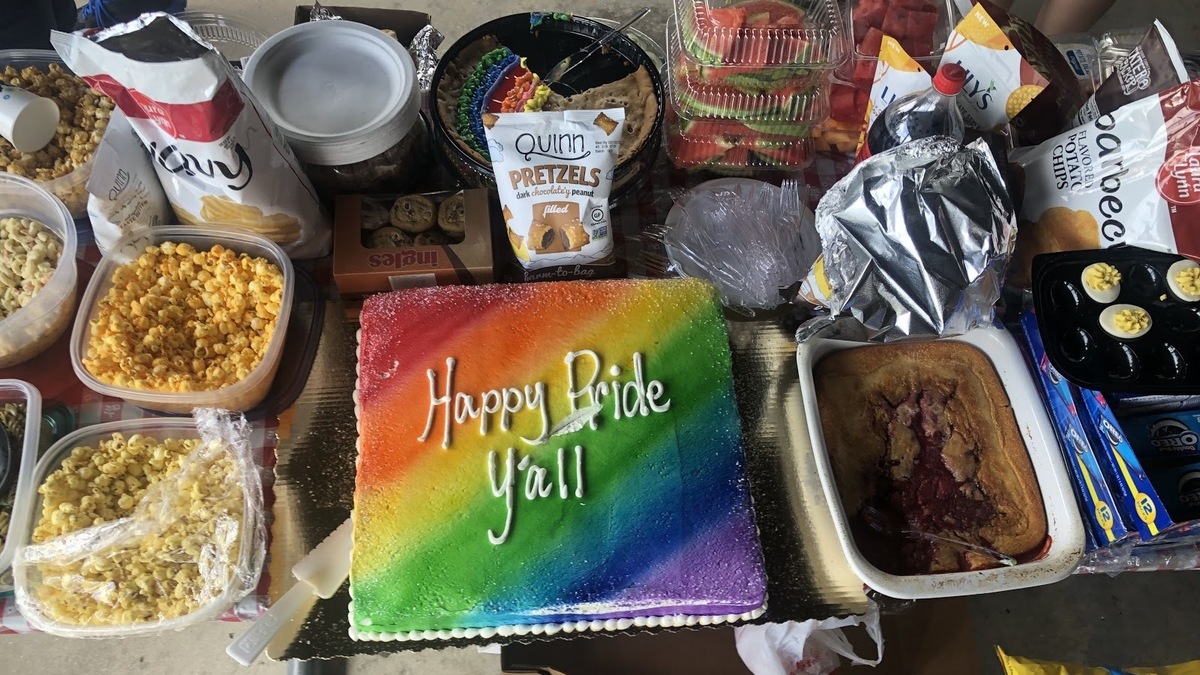 Attendees brought a range of picnic fare to the Hendersonville Pride potluck, including a strawberry cobbler, deviled eggs, watermelon and a rainbow cake that reads "Happy Pride Y'all."

On a beautiful June afternoon in the Blue Ridge Mountains, dozens of tiny rainbow flags lead the way toward a park pavilion. A couple walks up to the pavilion, each holding a gallon of iced tea. In the parking lot, people are unloading their lawn chairs.

The small city of Hendersonville, N.C., celebrated Pride for the first time. Unlike many Pride celebrations in bigger cities, there was no parade or festival. It was a potluck picnic.

Hendersonville is about 30 miles from the scenic, eclectic city of Asheville. Downtown Asheville is speckled with rainbow flags. It's common to see same-sex couples and gender diversity. Asheville hosts Blue Ridge Pride every September. But drive just a few miles in any direction outside Asheville's bustling downtown, and the climate of LGBTQ acceptance seems to change.

For some in Hendersonville, Asheville can feel out of reach. Laura Bannister, organizer of Hendersonville's Pride picnic, says no one should have to leave their community to celebrate Pride.

Many participants came bearing casserole dishes of homemade food. Under the park shelter, picnic tables overflow with "salads" — and not the leafy green kind. Don Streb, one of the volunteers at the event, showed off the spread.

And that's only the salad table. There's also the hamburger and hot dog table, the chips and dip table, and two picnic tables covered in desserts.

No one knew how many people to expect at Hendersonville's first Pride event. Streb was overwhelmed by the turnout. Approximately 500 people attended, in a town of only 14,000.

"People keep coming and food keeps coming," Streb says. "It's just a day of pride that's making me choke up." 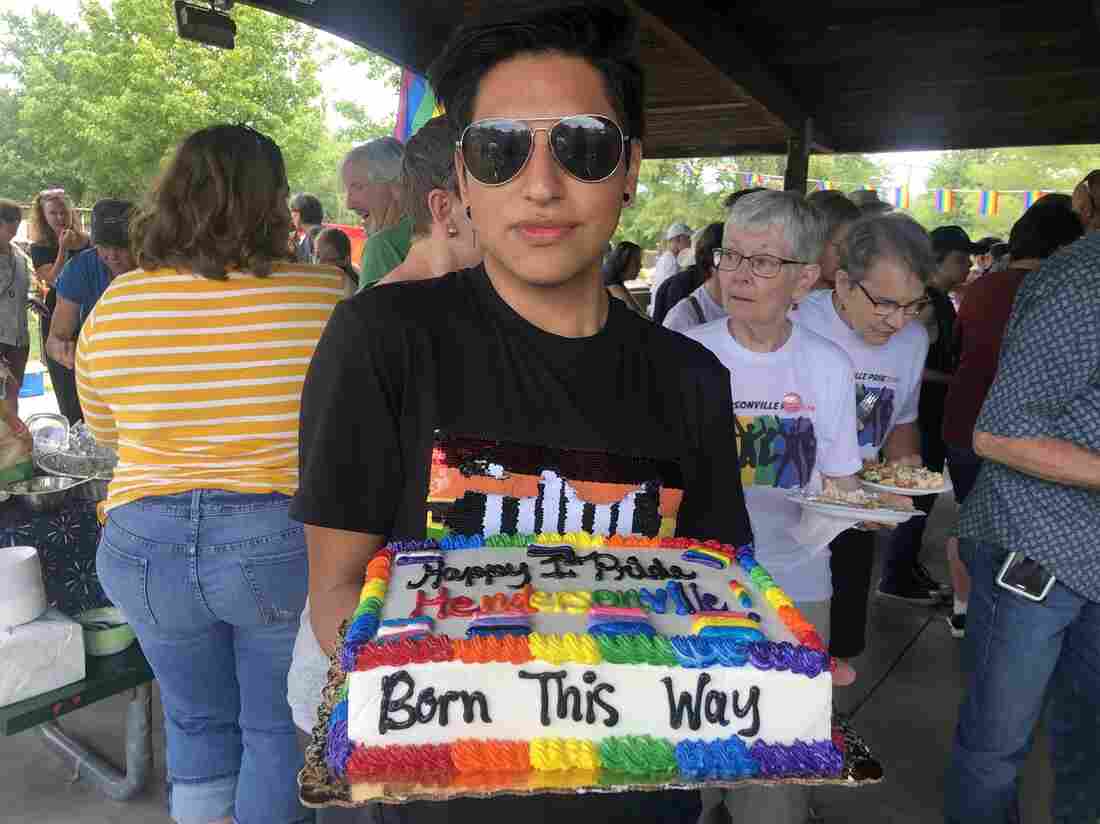 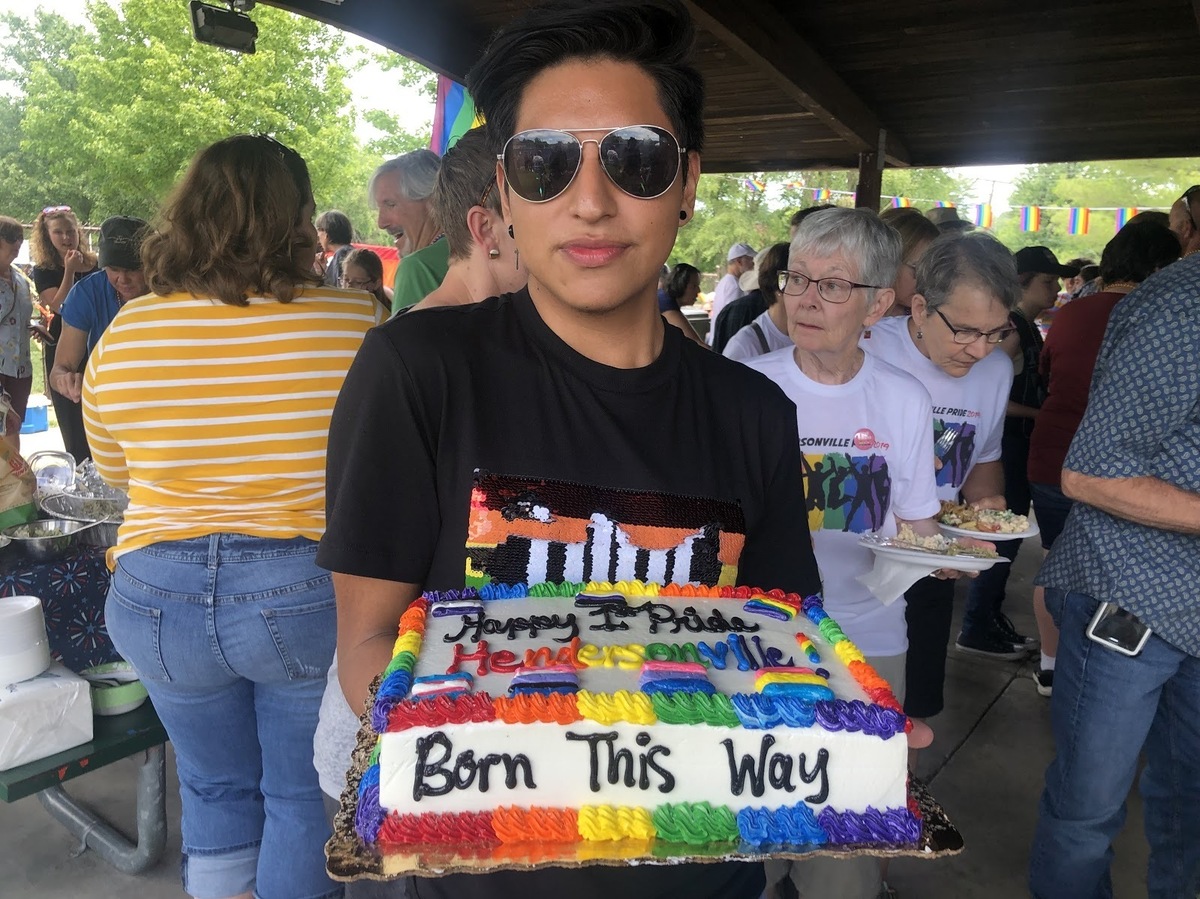 Hector Trejo, 20, designed and decorated a cake for the potluck. It reads "Happy 1st Pride Hendersonville."

It's a sentiment that others share. "This is more people than I thought was gonna be here," says Hector Trejo, a 20-year-old Hendersonville resident.

Trejo wouldn't have missed the inaugural Pride for anything. Under his aviator glasses, his eyelids are bejeweled with rhinestones. "She's holding my heels," he says, pointing to a friend nearby.

Trejo even decorated a cake. "It has all of the different Pride flags on the side." He points to the colorful icing on the cake, smiling. The cake reads, "Happy 1st Pride Hendersonville." Having a space to be out and open in the community is important for him.

"I was in the closet for a long time," Trejo says. "And to me, seeing all of this right now, just seeing everyone so happy is amazing."

Before people dig in, the Rev. Joan Saniuk, pastor of the local Metropolitan Community Church, says a blessing: "Look at how many beautiful people are gathered here today. So thanks for the food and for everyone who prepared it. Feel free to say 'Amen!' "

For Saniuk, a Pride picnic is symbolic of fellowship. "When we share food together, we belong to each other," Saniuk says. "We're family."

There are quite a few clergy members at the picnic. Another is the Rev. Jerry Miller, whose son came out as gay four decades ago. At first, it wasn't easy for Miller to reconcile his faith with his son's identity.

"My wife and I basically went in the closet because I was a pastor of a Baptist church at that time. And I prayed that God would change my son someday," Miller says. "God didn't change him; he changed me." 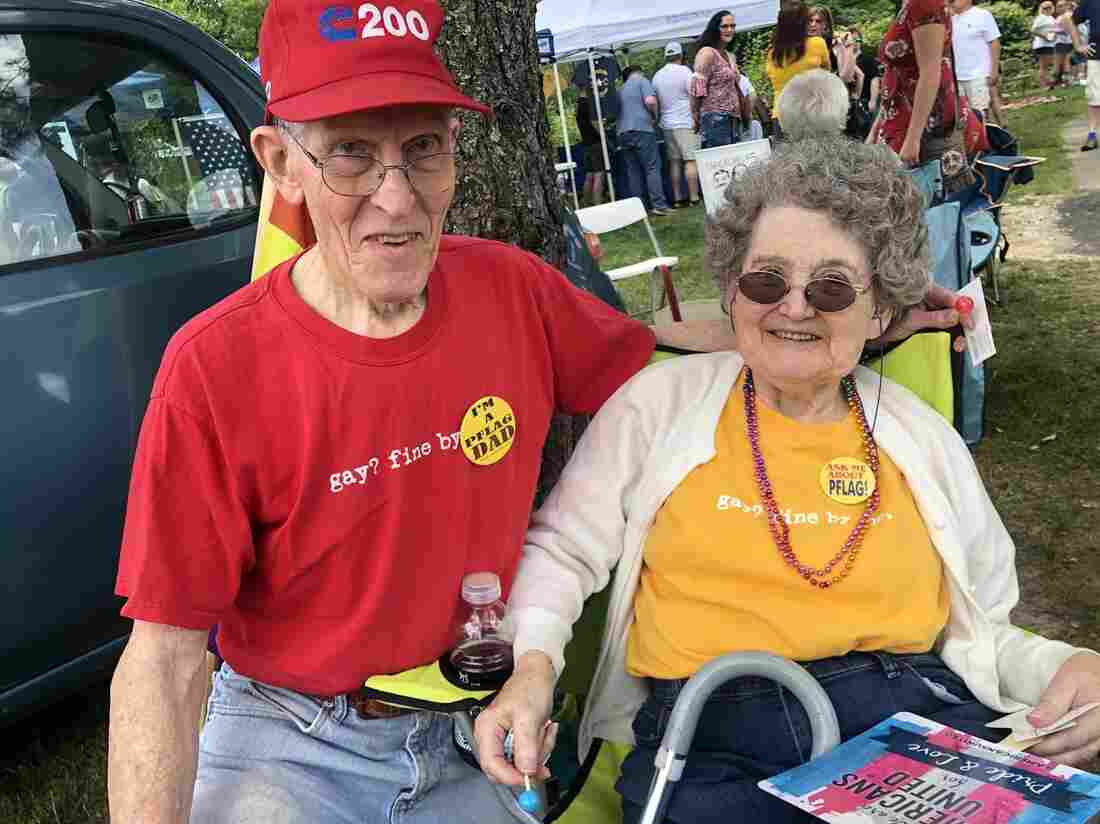 Jerry Miller and his wife, Bea, at the picnic. The couple wears matching T-shirts that read "Gay? Fine by me." Monique LaBorde for NPR hide caption 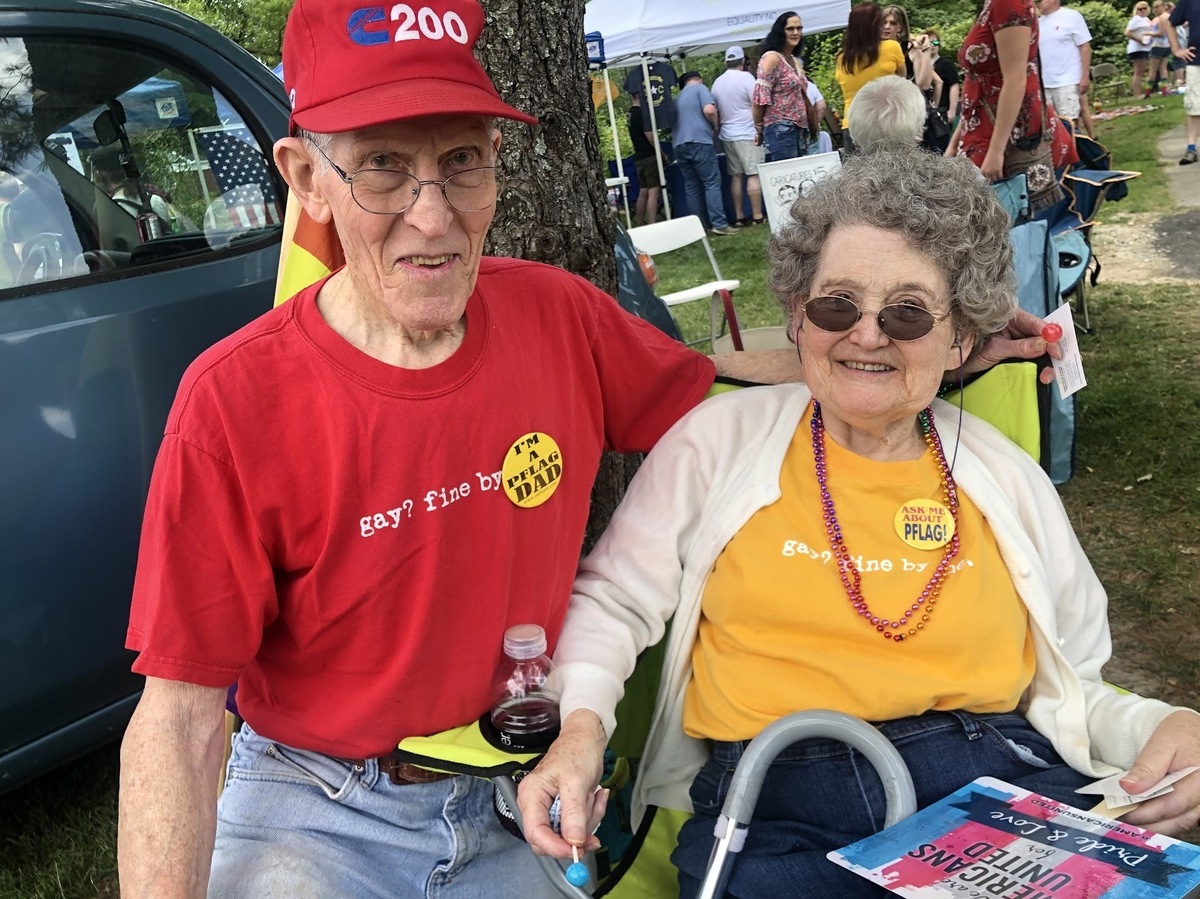 Jerry Miller and his wife, Bea, at the picnic. The couple wears matching T-shirts that read "Gay? Fine by me."

Miller, 85, is like the grandfather of this community. Twenty years ago, he began leading a local PFLAG chapter, a group for family and friends of LGBTQ people. Back then, new members of the group had to call a phone number to get the meeting location. Fearing community backlash, the leaders never shared it publicly. Miller never expected to see Pride in Hendersonville.

"I didn't think it was possible," Miller says. "You know, I never even thought about it until Laura came along."

Laura Bannister moved to Hendersonville three years ago with her partner and currently leads the LGBTQ Democrats of Henderson County.

Bannister used to live in Washington, where it was common to see LGBTQ celebrations. Not so in Hendersonville.

Bannister thought, of course the city should celebrate Pride. Why not? But the path to making her dream a reality wasn't easy.

"I've had a lot of resistance," Bannister says. "There've been people that've told me, the KKK will show up if you have this picnic at the park."

In the week before the picnic, Hendersonville's mayor, Barbara Volk, issued a proclamation designating June 15, 2019, as Pride Day. The proclamation drew a crowd of around 60 protesters, holding signs with Bible verses. Bannister had a feeling these same protesters would show up at the Pride picnic. The thought that someone might bring a gun kept Bannister up at night.

But on the day of the picnic, not a single protester showed up. Attendees talk about the weather, swap recipes and share stories about mutual friends. For many, it is their first time at a Pride event.

High school student Damiana Hylemon came with her mom. A bisexual Pride flag is draped around her shoulders like a cape. She has a rainbow painted on her cheek.

"I've seen other people with other flags painted on their face, but I just really wanted the rainbow one," Hylemon says.

She found out about the event from her high school's Gay-Straight Alliance.

Helping young people like Hylemon feel a sense of community is the reason Bannister wanted to organize a Pride event.

"I don't want young people to feel isolated [or] alone because they don't have anyone to talk to," Bannister says.

For her, the picnic isn't just about having a good time on a Saturday; it's about creating a culture of inclusion that makes young LGBTQ people in Hendersonville feel safer.

Miller hopes that next year Hendersonville will have its first Pride march. Or, as he offered, "at least a stroll up Main Street."

Miller wants the potluck picnic to remain a Pride tradition, too. If the success of the first Hendersonville Pride is an indicator, it seems like the Pride picnic is here to stay.

A previous version of this story misspelled Joan Saniuk's last name as Sanuik.