Accessibility links
7 Dead After Pickup Truck Collides With Motorcycle Riders in N.H. "I can't emphasize enough how horrific this is," says Charlie St. Clair of the Laconia Motorcycle Week Association. "It's our worst nightmare." Three other motorcyclists were injured. 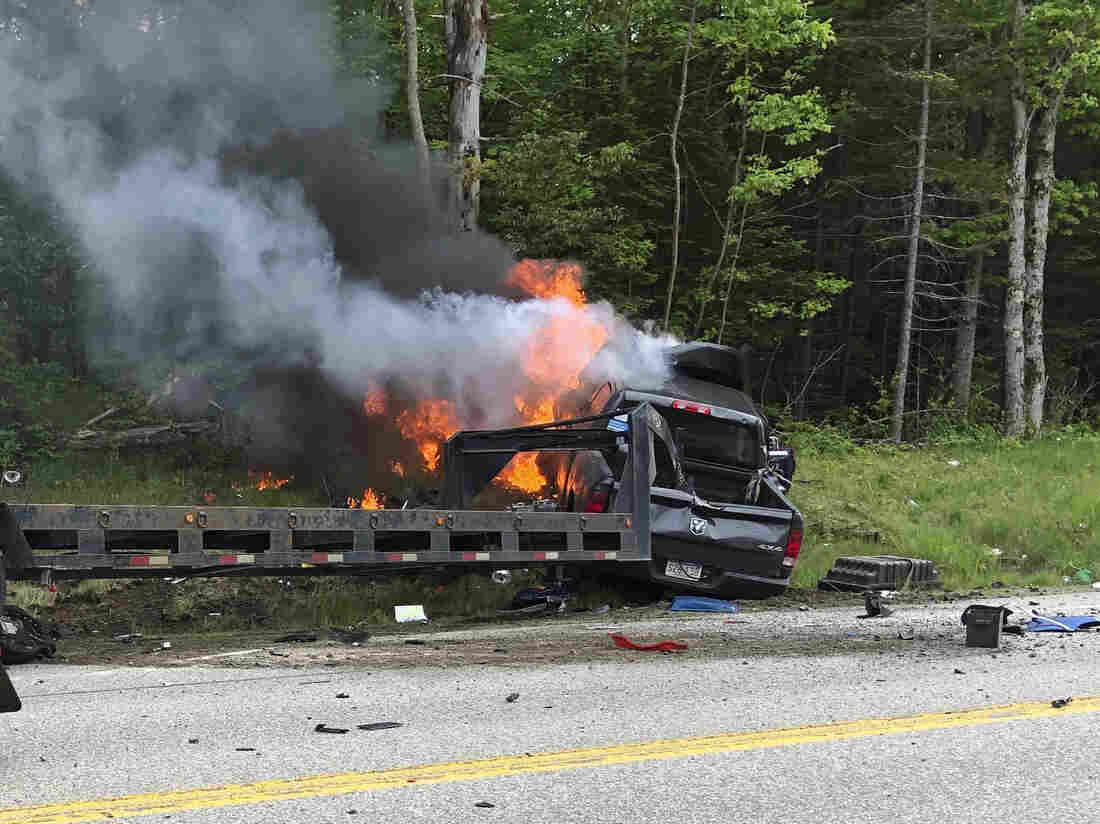 This photo provided by Miranda Thompson shows the scene where several motorcycles and a pickup truck collided on a rural, two-lane highway Friday in Randolph, N.H. Miranda Thompson/AP hide caption 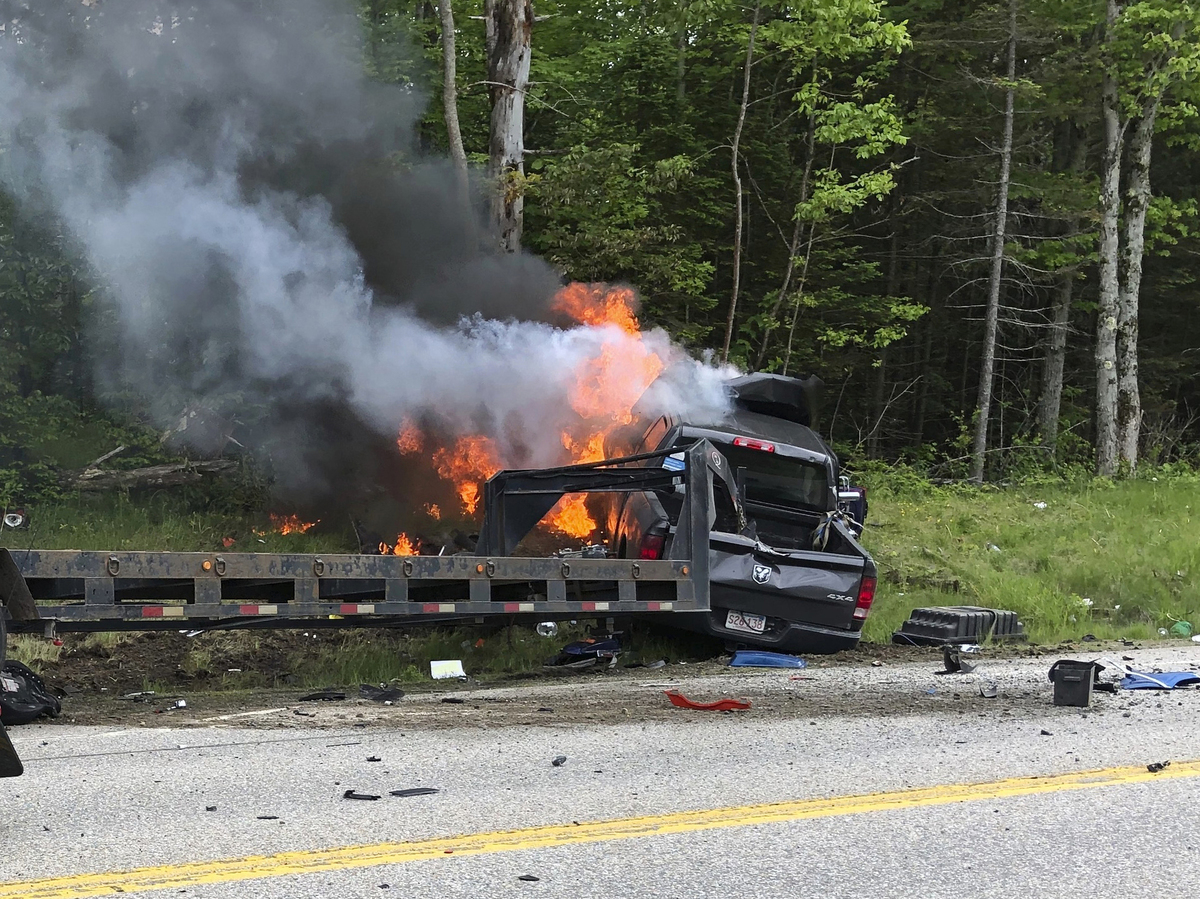 This photo provided by Miranda Thompson shows the scene where several motorcycles and a pickup truck collided on a rural, two-lane highway Friday in Randolph, N.H.

A pickup truck in rural New Hampshire struck and killed seven people and injured three on motorcycles Friday night. The crash ignited a small fire in a nearby wooded area and left a wreckage of damaged vehicles and the bodies of victims strewn across the highway.

State police said a Dodge pickup truck with an attached flatbed trailer large enough to haul a car was traveling westbound when it plowed into the motorcycles, which were moving eastbound, around 6:30 p.m. Friday, along U.S. 2 in Randolph.

Authorities are still investigating what caused the deadly collision. Some witnesses reported seeing the truck swerving just before it struck the bikers.

The names of the victims have not been released, but police identified the driver as Volodoymyr Zhukovskyy, 23, of West Springfield, Mass., who survived and has not been charged. A number could not be found for Zhukovskyy in public records.

Police said three other motorcyclists were injured, one of whom was airlifted to a local hospital after the crash.

Some of the riders were members of the Jarheads Motorcycle Club, which comprises active and veteran Marines. They were on their way to a bike gathering in northern New Hampshire, said Charlie St. Clair, executive director of the Laconia Motorcycle Week Association, a large motorcycle gathering that ended last weekend.

"I can't emphasize enough how horrific this is," St. Clair told NPR. "It's our worst nightmare."

The group was on a charity ride connected to an American Legion in Gorham, N.H., according to an online fundraiser set up for the families of the victims.

"Jarheads MC has always been about helping veterans and their families and sadly, today we are in need of that same support," wrote Doug Hayward, a member of the Jarheads Motorcycle Club.

Hayward said five of the victims were members of the club, and two were supporters. 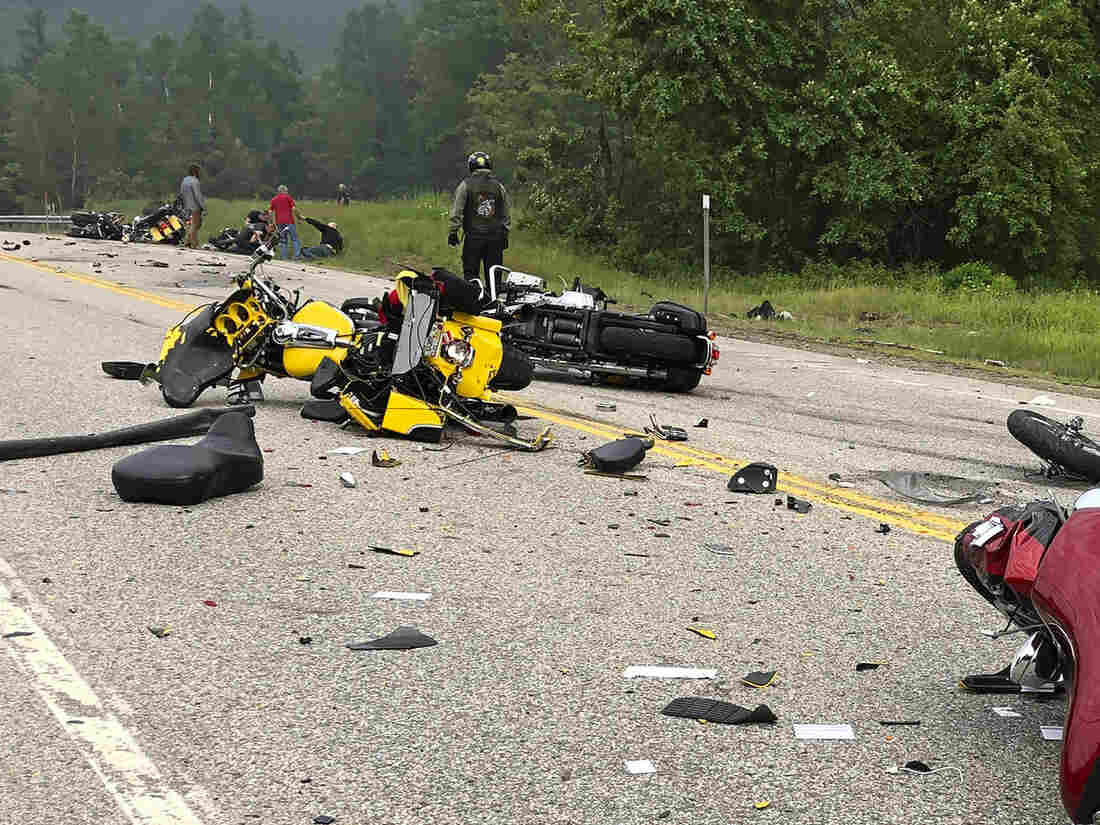 This photo provided by Miranda Thompson shows the scene where several motorcycles and a pickup truck collided on a rural, two-lane highway on Friday. Miranda Thompson/AP hide caption 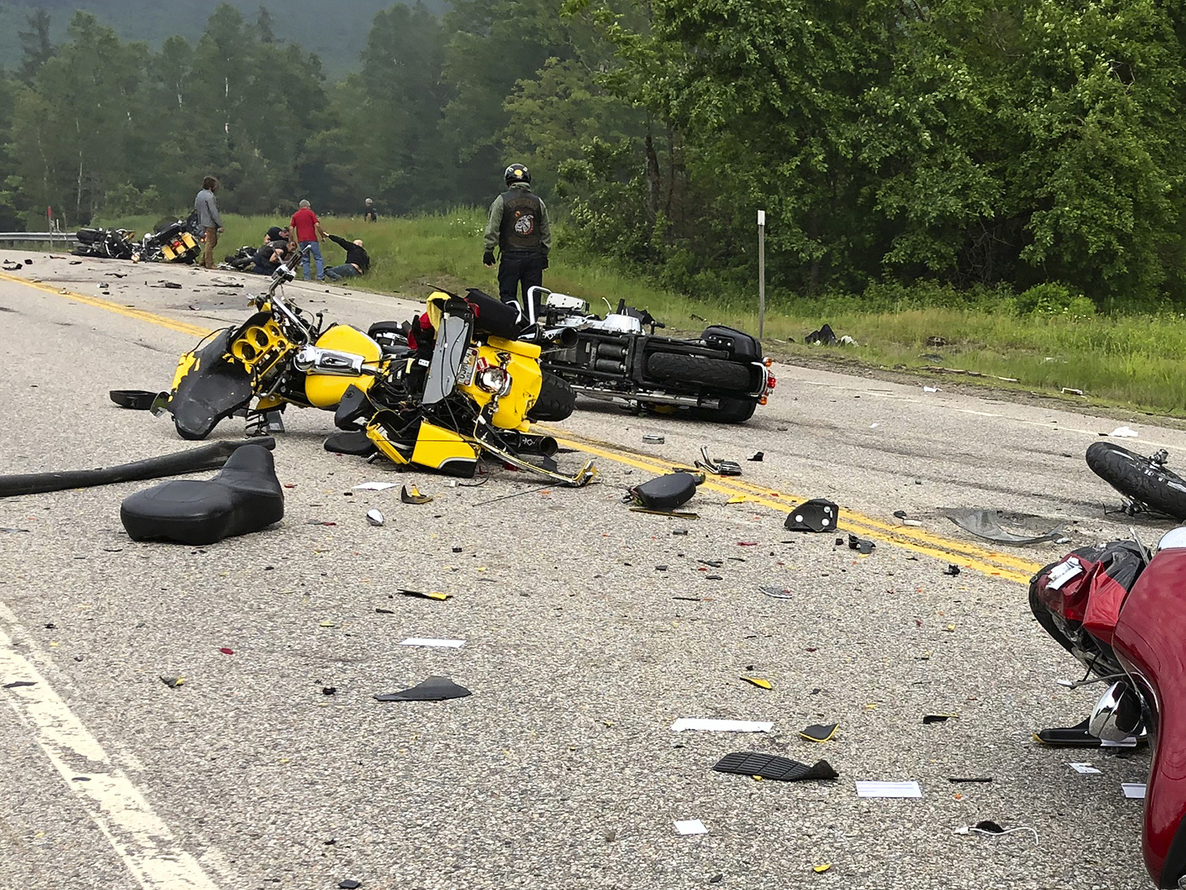 This photo provided by Miranda Thompson shows the scene where several motorcycles and a pickup truck collided on a rural, two-lane highway on Friday.

Beatrice Engstrand, a neurologist who was a first responder to the scene, told NPR the crash site looked "horrible."

Engstrand was staying at a nearby bed-and-breakfast when the owner pounded on her door and said a doctor was urgently needed outside of the inn.

When she rushed out, she saw a grisly scene.

"At least three bikers were thrown into the woods, and there were flames over 20 feet high," Engstrand said. "The motorcycles were all chopped up all over the roads, and there were bodies everywhere and people crying."

Engstrand put tourniquets on some of the injured, applied compression with towels and belts to bloody wounds and performed triage before emergency responders arrived.

"There was death everywhere, people in extremis, people crying," Engstrand said. "Complete devastation. A lot of tension in the air."

Before the pickup truck hit the motorcyclists, Estrand said several eyewitnesses told her it appeared to be swerving uncontrollably.

Randolph, a remote town of some 300 people, is about a two-hour drive north of Concord, the state's capital.

"It's tragic," New Hampshire State Police Capt. Chris Vetter told reporters Friday night. "Our concern right now is with the victims, the victims' families and anybody else who was adversely affected by this accident," he said.

St. Clair, the motorcycle event organizer, was not on the scene but said since the collision, he's been fielding a flood of calls from people in the biking community.

He said he cannot recall any motorcycle accident in New Hampshire that involved this many fatalities.

St. Clair said the section of U.S. 2 where the collision occurred does not have rumble strips, which warn drivers that they are veering onto the highway's shoulder.

"There are now some reasonable questions about having them," St. Clair said. "Maybe if they were there, some lives could have been saved."

The National Transportation Safety Board has sent a team to Randolph to help local authorities with the investigation.

New Hampshire Gov. Chris Sununu told reporters that the crash "clearly struck our state and our citizens in a very serious way."

Sununu also pleaded for the privacy of victims' families to be respected. "God bless them all," he said.

As the investigation into yesterday’s tragic accident in Randolph develops, we ask those to respect the privacy of the victims, their families, and the survivors. God bless them all. pic.twitter.com/zSb8tIPPvD