Accessibility links
High School Graduation Speeches From Valedictorians To Class Presidents Words of wisdom, and hope, from speeches given by seniors this year at their high school graduation ceremonies. 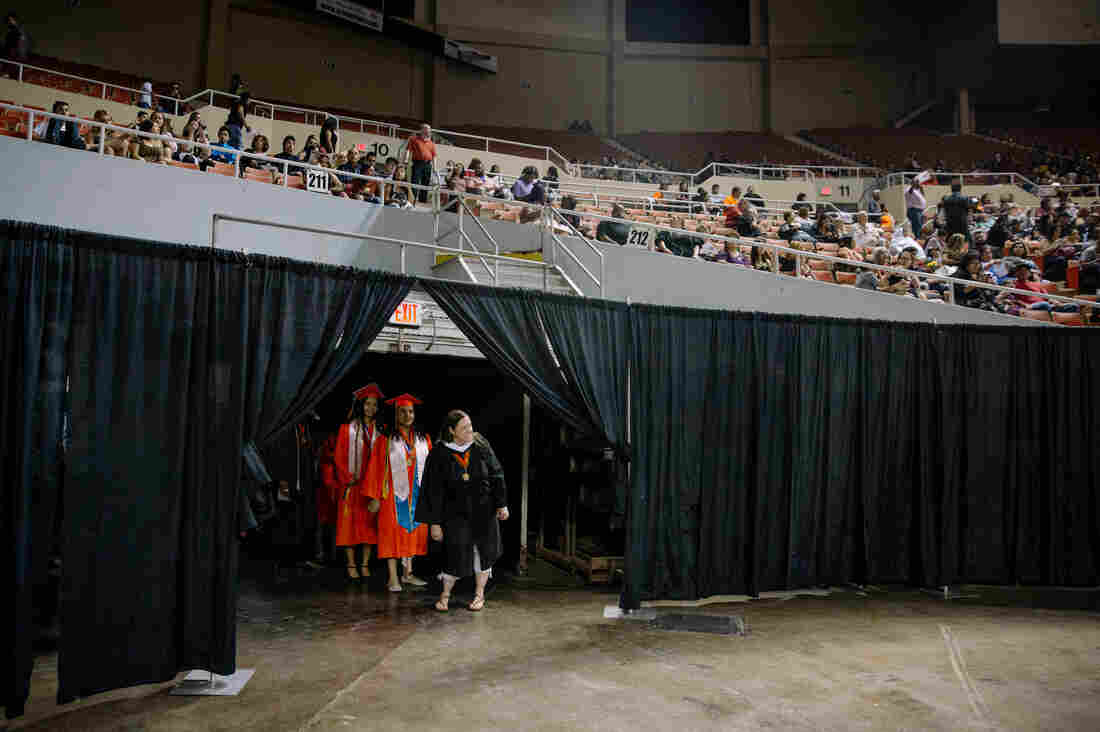 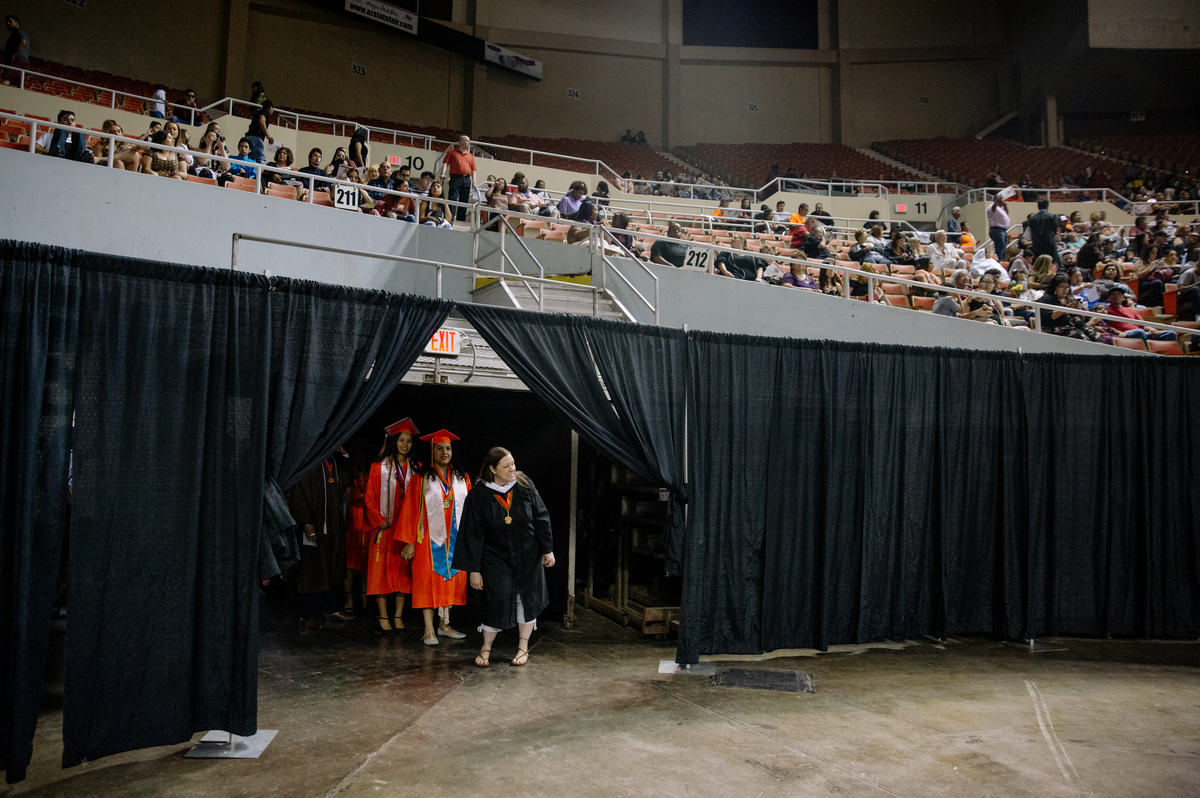 This year's high school graduates were born after the dawn of the new millennium. Some have dealt with school shootings. Others helped organize demonstrations to speak out against gun violence or climate change. We've reported on how college students are becoming more "nontraditional" than we think, but high school students — through social media and their experience — are also becoming more nontraditional.

So what's on the minds of these 18-year-olds gearing up to face the adult world? Many of them — valedictorians, class presidents and others — talked about their hopes and dreams in the speeches they made at graduation.

This year, the NPR Ed team — and member stations across the country — traveled throughout the U.S. to hear those speeches from the final moments of high school. Here's what some of them had to say. 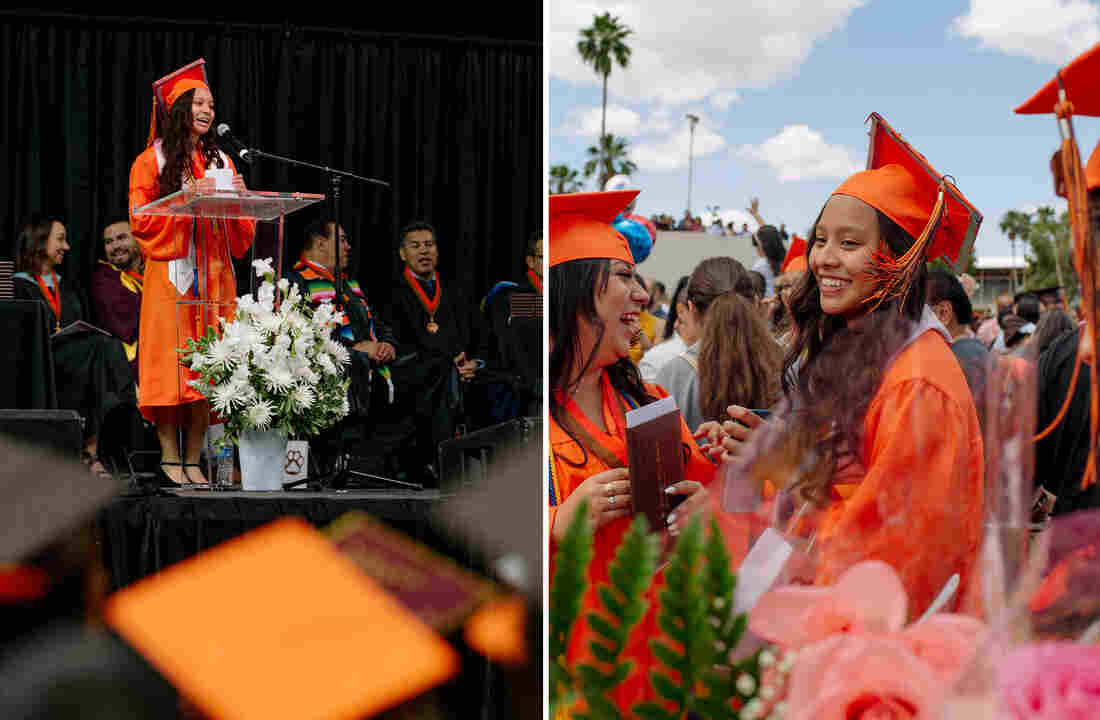 Olivas, a DACA student, plans on attending Phoenix College in the fall, where she wants to study health administration.

Can I please have you raise your hand if at any point someone doubted that you would graduate? Keep your hand raised if the person that doubted you at some point was yourself. Ladies and gentlemen, this is the reality of many of these students lives. I want to congratulate every single one of you for completing high school and defeating all stereotypes and prejudice that others had of you. Some thought you would drop out, others thought you would be working 12 hours a day, but here we are proving that we made it and no one can take that away from us! I am still overcoming my own hurdles as Arizona legislation has made it almost impossible for DACA students like me to afford to go to college but I will not give up. I will go to college, I will graduate, and I will succeed as long as I always have God on my side.

Students at Woodland Hills High School, outside Pittsburgh, have seen their school in the news multiple times over the years. Last year, the school settled a lawsuit that alleged "white school administrators had engaged in discriminatory behavior against the black students." Students there also organized rallies after one of their classmates, Antwon Rose, was shot and killed by a white police officer. (A jury acquitted the East Pittsburgh officer in March.) Brooks touched on these themes in her graduation speech.

I won't claim to know each and every one of you personally because I don't. But that doesn't make us complete strangers. Maybe we only sat next to each other for three weeks in sophomore etymology. Maybe your best friend is the sibling of my cousin's ex-boyfriend. Maybe we only walked past each other once in awhile in the hallway and never spoke. But one way or another, our paths have crossed. Although it has its problems, this school is a family. This building is a home. No we don't always get along and God knows we didn't always want to be a part of it. But that doesn't mean we loved it any less.

That is what I've taken away from my time at Woodland Hills: to accept people as they are, no matter where they've come from because everyone deserves a chance.

As you go forward in your life, whether you're heading to a trade school, a university or simply wherever the wind takes you, remember to do so with an open mind and a full heart. Be ready for whatever the world throws at you and keep going because contrary to what the world keeps trying to tell you, you don't need to have all the answers right now. It's probably better if you don't.

Life is a learning curve, not a test. So spend however much time you need figuring out what you really want. The world will change you in ways you would never expect, but you shouldn't fight it. Let it help you grow. We have been through so much in our years here, so don't let that weigh you down. But let it push you forward and be what helps you make this world a better place.

This year's graduating class was seven students strong. The district — which covers a huge area, around 1,300 square miles — also has the smallest enrollment in Wyoming, about 90 students in K-12. Many students have a daily commute of 40 minutes to an hour on the bus. 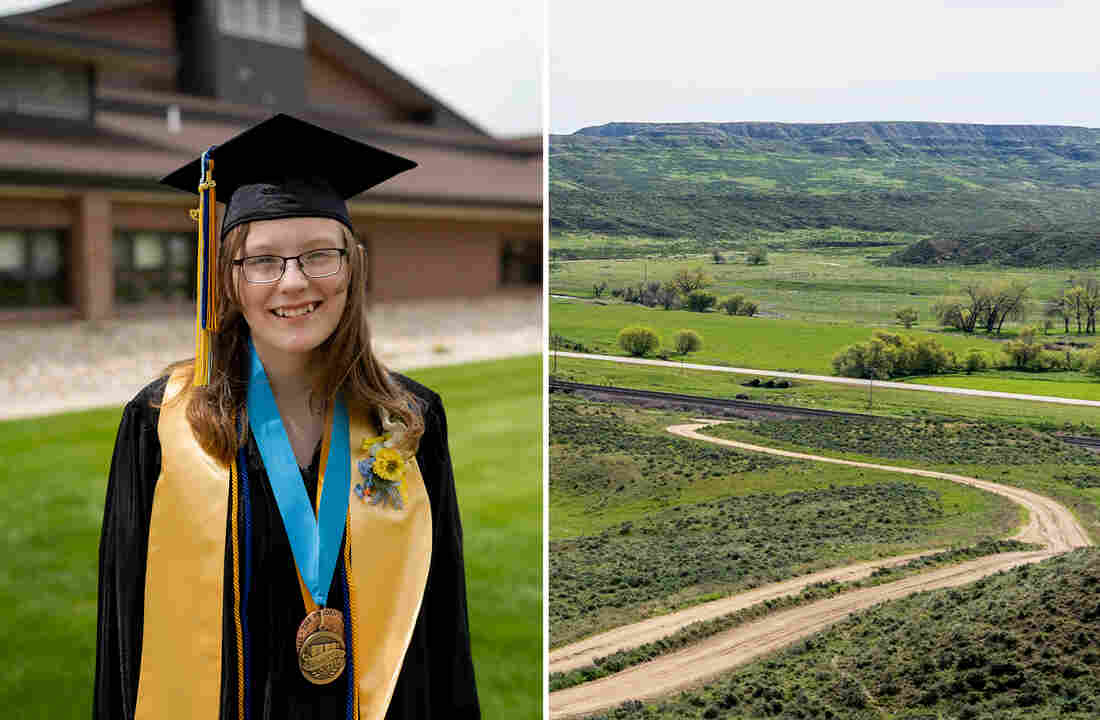 But in her speech, Smith didn't talk about a life of isolation, but looked forward to what lies ahead.

There is no easy path without obstacles to achieve your dreams and goals; however, don't worry or fret about those obstacles. Embrace them. Dive into them headfirst because you have nothing to lose.

Don't back down from the bullies, stand up for yourself. They're going to be bullies that try to tell you that you can't achieve your goals but ignore them. Try and prove these individuals wrong.

Also, if you're the type of person that's afraid to ask for condiments at a restaurant, you'll never get what you want. If you always back down, then you'll never reach your goals as easily as if you'd stood up for yourself — so stand up for yourself and share your ideas opinions and beliefs with others. 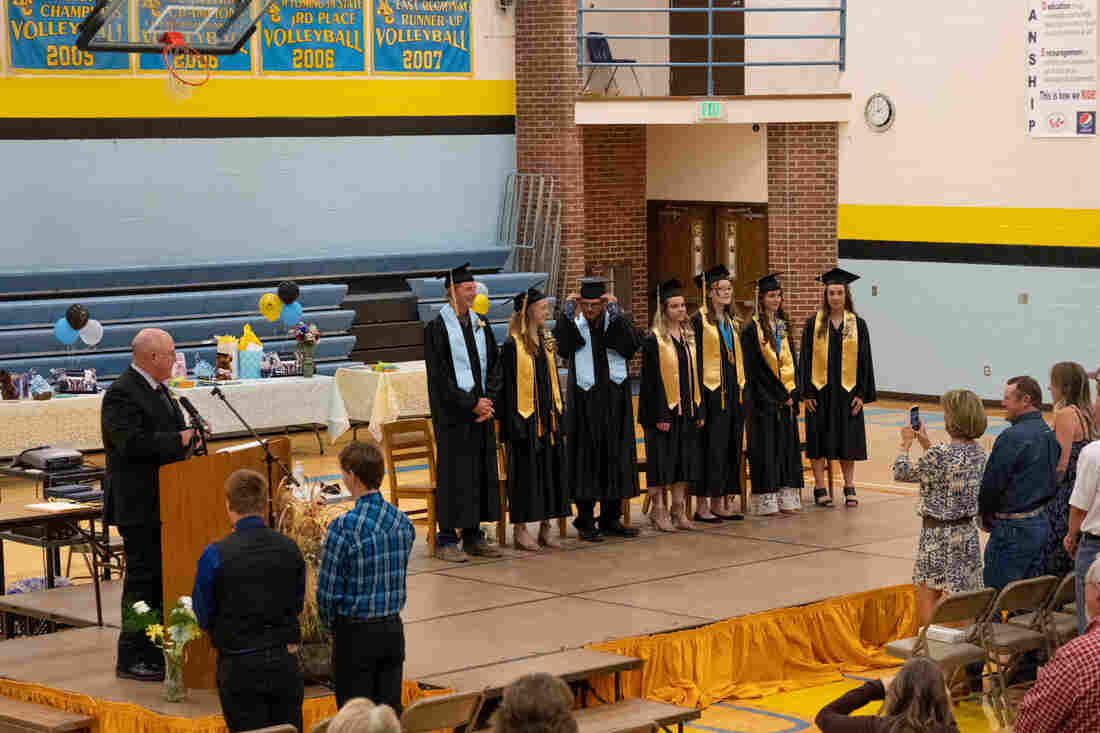 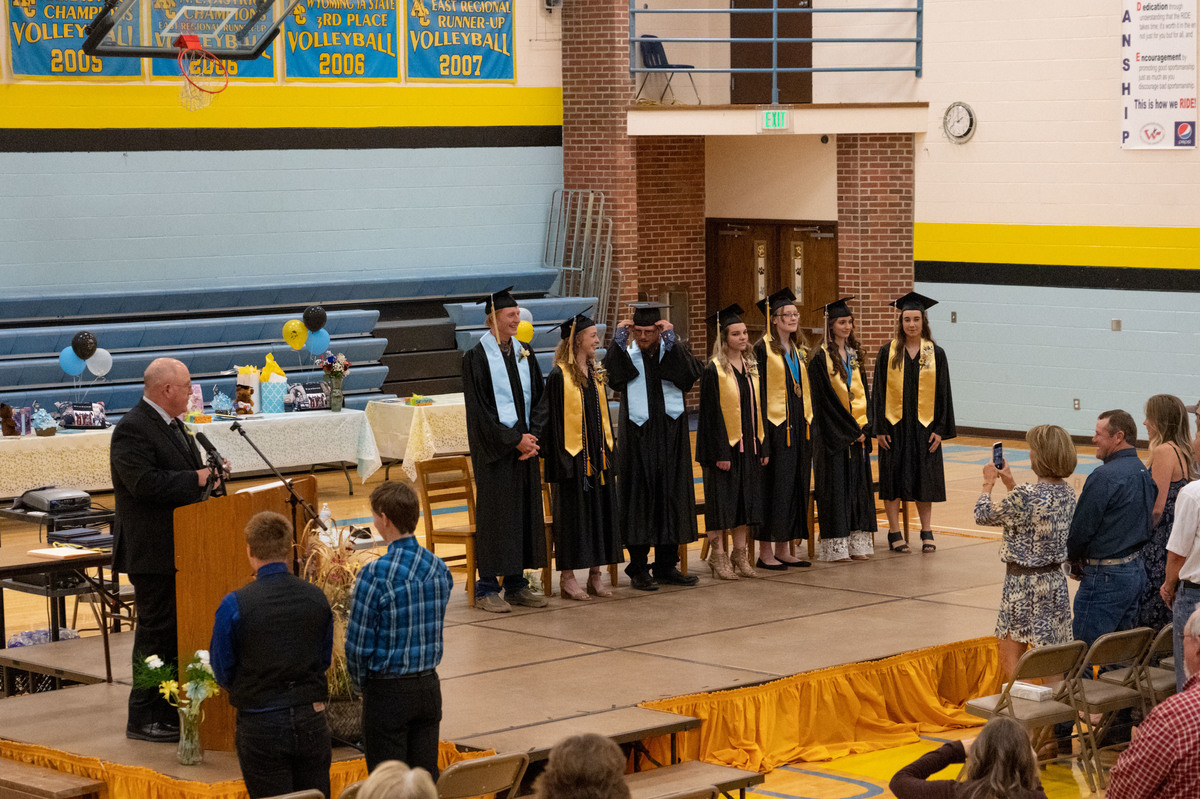 Richardson says she understands that college isn't for everyone. But since she started high school almost four years ago — through internships and extracurriculars — she has been preparing for that next step after high school. 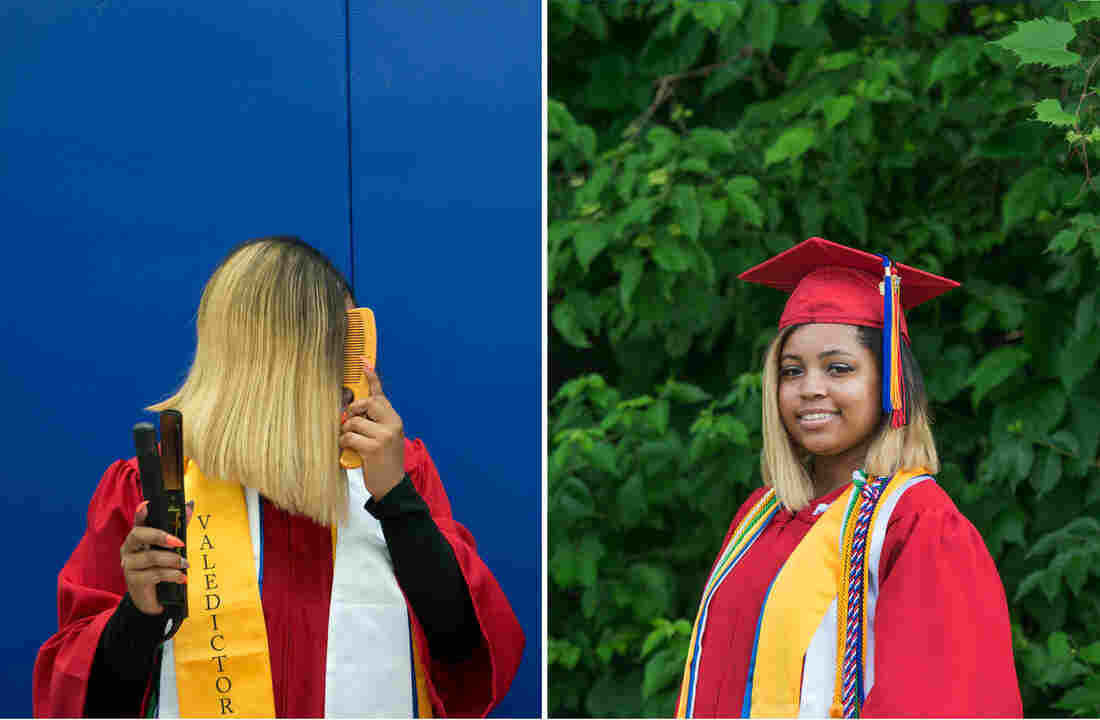 After high school, Richardson will be working in a lab through a collaborative internship between her high school and the University of Missouri-St. Louis. She'll be attending St. Louis University in the fall where she plans to study chemical biology and pharmacology.

I never knew that I would be here standing before you to give this speech because at times, things felt almost impossible for me ... As we prepare to go our separate ways, I would like to leave you all with three lessons I've learned throughout my high school journey.

The first one is be patient. Let's face it, we all know that after today most of us will not see each other again, and once that reality hits, you'll realize that you should've stopped and smelled the roses. All of us emphasized how ready we were to leave school and move on to bigger and better things, but the truth is those are years we are never going to get back and memories we won't experience again.

The next lesson is to never let anyone else define you. No one has the authority in your life to tell you what you can and can't do. Nobody knows what the future holds for you and who you may influence along the way. Every last one of us is unique and that means we will take on different paths, lifestyles, and obstacles to reach success. I'm here to tell you it doesn't matter how long it takes or what order you do it as long as you get it done for yourself. Yes you are going to have failures along the way but that is just pointing you in a new direction to accomplish your goals.

Your next job in life is to figure out what you like and what your calling may be.

Yes, it's nice to have someone on your team, but the most important thing you can do for yourself is be your own cheerleader, encourage yourself and give yourself motivation to keep pushing forward even if the world may seem against you. Oprah Winfrey once said, "Surround yourself with only people who are going to lift you higher." 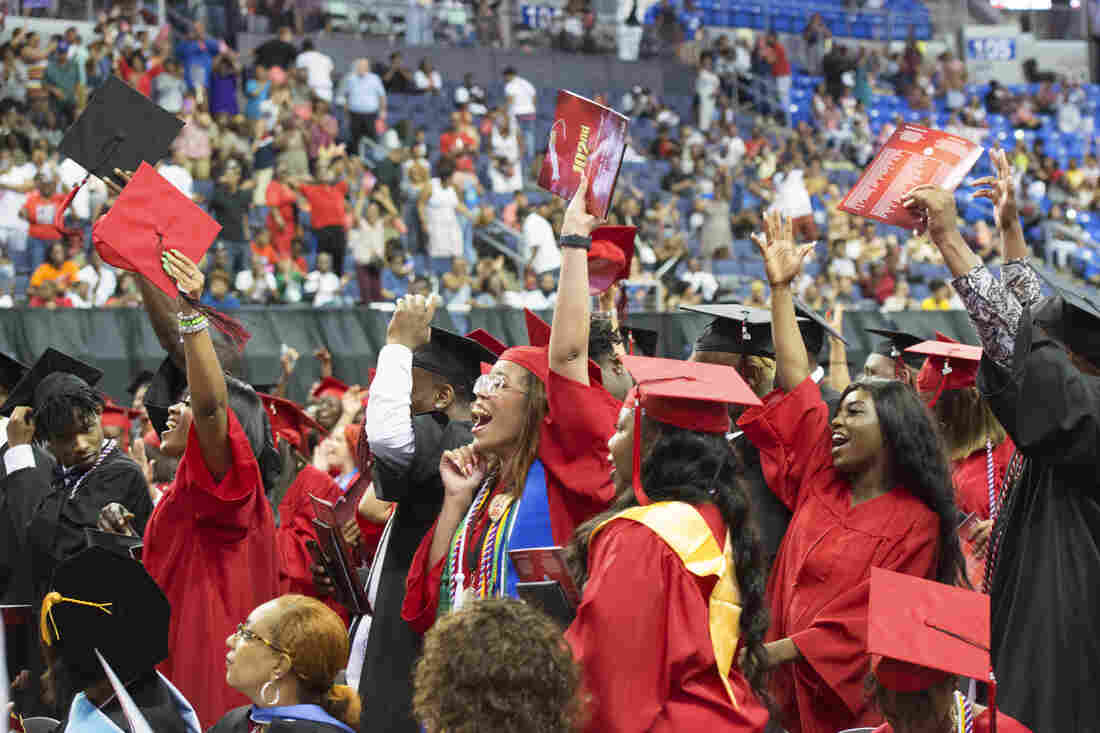 Students cheer their class of 2019 at Jennings High School, during their graduation ceremony at the Chaifetz Arena in Saint Louis, Mo. Neeta Satam for NPR hide caption 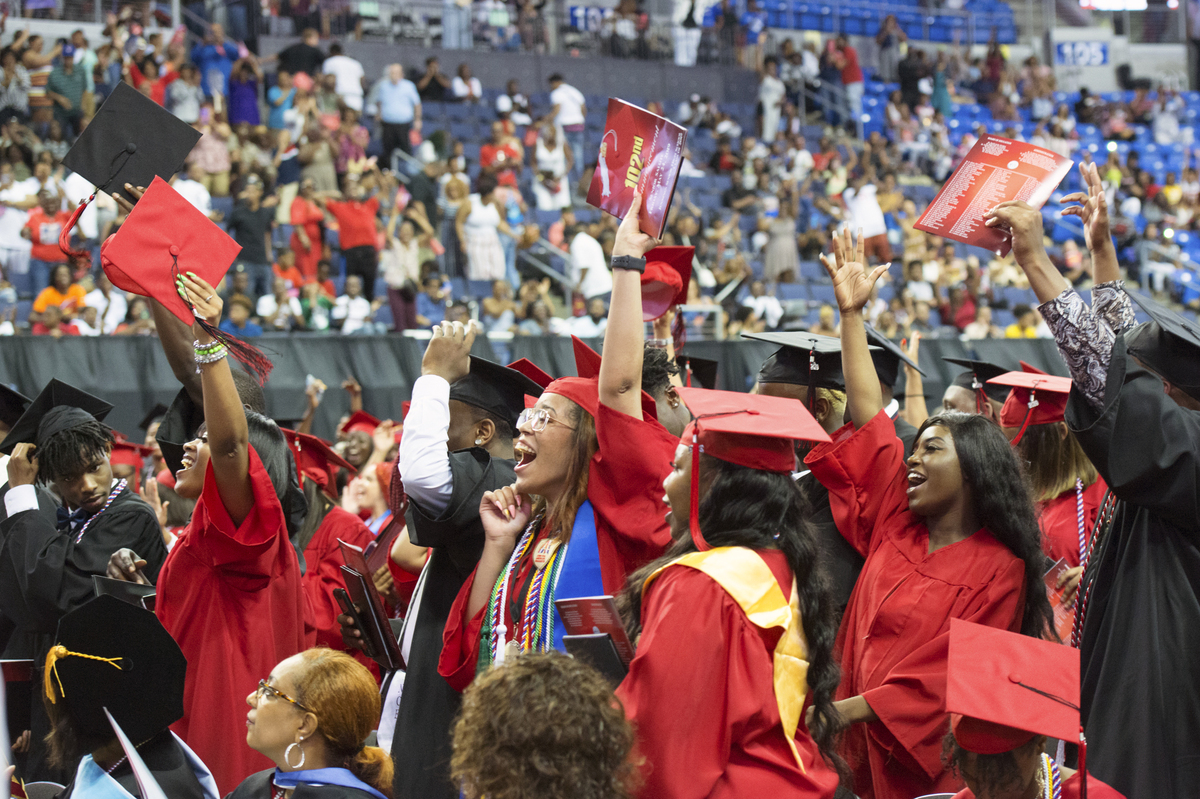 Students cheer their class of 2019 at Jennings High School, during their graduation ceremony at the Chaifetz Arena in Saint Louis, Mo.