Accessibility links
'The Snakes' By Sadie Jones: Bad Things Happen Out Of The Blue The author says writing this novel was like writing an "anti-murder mystery." Murder mysteries are nice and tidy, she says, but this disturbing morality tale is about unforeseeable tragedy. 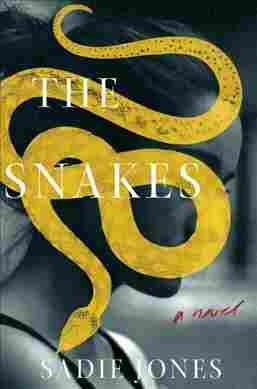 There are two sets of reptiles in Sadie Jones' new novel The Snakes — the slithering kind, and the human kind. Bea is a newly married psychologist and the daughter of a ruthless billionaire. She wants nothing to do with her dad's money.

"There are very few people who could have that much wealth and not be corrupted by it — and Bea is one of them," Jones says.

Her husband Dan grew up the son of a single mom and can't understand why his wife is so unwilling to take advantage of what wealth has to offer. Bea and Dan leave London to visit her brother, Alex, who is running a ramshackle hotel in France. When Bea and Alex's parents unexpectedly show up, "all hell breaks loose."

Jones says working on this novel felt like writing an "anti-thriller" or an "anti-murder mystery."

"It's a book about chaos and the surprise terrible things that happen that we can't foresee ..." Jones says. "A murder mystery or thriller is very tidy and this is a book about things happening out of the blue."

Jones' other novels include The Outcast, Small Wars, The Uninvited Guests and Fallout. When she started writing The Snakes in 2016, she was in a "state of anxiety and shock" about the world. "I was worried I was going to be writing too big a moral tale of good and evil," she says, "and then the rest of 2016 happened and I realized that I almost couldn't write it big enough."

On Bea and Dan leaving London

They live what Bea thinks is a really good life, and Dan finds very hard. They are mortgaged up to the hilt in their very small flat. And when they get to France ... they find her brother [Alex]. The hotel — he's meant to be renovating it — and he's sort of meant to be renovating himself. He's an addict — and a kind of hopeless, sweet creature — and we don't think he's probably ever had any guests in the hotel and it gradually comes out what a mess he is.

On Bea and Dan's parents, Griff and Liv

[Griff] is quite a charming character ... some people love being with him ... and other people are completely appalled and shocked and disgusted by him. And he's just absolutely sure that he's right about everything and I think that that level of money does erode people's empathy ... if they're getting the rewards they must be right about the rest of the world and then they gradually lose the humanity I think. ...

Griff is the sort of obvious villain. He's brash, and he's outspoken, and he does what he does — he's sort of what you see is what you get. But Liv ... she's like the hollow to his full, or the shadow to his spotlight. She's really just this moral vacuum.

On the creepy character of Russ

Russ is a character who happens out of the blue. He's the only American in the book. Griff — people have often said, "Oh, he's a bit Trumpian" — but I really saw Russ as my sneaky Trumpian character because he just turns up, and breaks all the rules, and screws everything up. So that was kind of a joke to myself as I was writing — but there's really nothing funny about him at all. He is a desperately dark creature.

On whether she always knew the ending

Yes, I always know what my ending will be. Getting there is another thing — but I knew what I was going to do, and I knew the expectations that I was setting up to break down to get there. ... I didn't want to chicken out of the ending because I think that endings really ... define a book, and if it's going to be a harsh book, and it's going to be truthful, then you can't mess around and just compromise.

Peter Breslow and Nicole Cohen produced and edited this interview for broadcast. Beth Novey adapted it for the Web.