Accessibility links
Simple, Sassy 'Summer Of '69' Is The Perfect Beach Read Elin Hilderbrand — known as the "Queen of Summer" — is back with another beachy tale of family secrets and intrigue (and tasty period details), set on Nantucket during the turbulent summer of 1969.

Simple, Sassy 'Summer Of '69' Is The Perfect Beach Read

Simple, Sassy 'Summer Of '69' Is The Perfect Beach Read 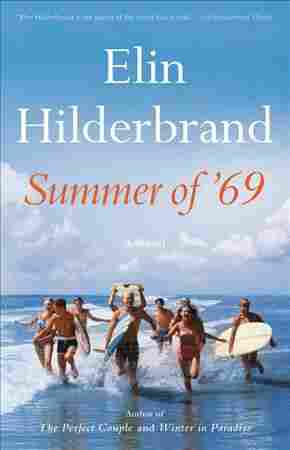 A faint tang of snobbery hangs about the term "beach read," as if, given the choice, we'd all prefer to sprawl out on a blanket in the Hamptons with War and Peace, say, or Infinite Jest (those might be properly termed littoral reads). But it takes more than sand to make a beach read: It needs a certain weightlessness, an ephemeral quality, with no heavy lifting required. Readers won't find themselves having to go back over particularly dense passages in order to keep up. Toes in the sand, sun in the sky, not a thought in our heads — that's a beach read.

Elin Hilderbrand has been named "The Queen of Beach Reads," and she wears the mantle lightly, with justifiable pride. Many of her books are quite literally littoral, in that they are set at the shore. She presents another breezy yet gritty novel with Summer of '69, the story of a family of long-time Nantucket vacationers who weather some tough times and ultimately find redemption, solace, even a measure of happiness. Chappaquiddick, the moon landing and Woodstock all have cameos in this, Hilderbrand's 23rd novel. Charles Manson, 1969's poster boy of darkness, doesn't make the cut. No really dark clouds allowed.

But that's not quite fair. Hilderbrand does include plenty of adversity in her stories, but it's of the type expressly designed to be overcome. At the center of Summer of '69 is Jessie Levin ("Rhymes with 'heaven,'" she tells people). The youngest of four children, Jessie resembles most 13-year-olds in being full of questions about life, and just as full of judgements about it. She loves and misses her brother, Tiger, who as the book opens ships off to "the Central Highlands of Vietnam with Charlie Company of the Twelfth Regiment of the Third Brigade of the Fourth Infantry." Tiger will favor her with adoring letters throughout the book, as she will write him and so forward the narrative. Though Summer of '69 is not quite an epistolary novel, the letters allow Hilderbrand to be two places at once, Nantucket and 'Nam, where, it is well known, Charlie don't surf.

Kate, Jessie's mother, descends into an alcoholic haze with the departure of her beloved boy. Blair, the eldest sibling, is pregnant with twins. Free spirit Kirby spends her time listening to rock'n'roll and attending political protests. In fact, as well it should be in a novel set in 1969, rock'n'roll serves as a thematic touchstone, with chapter heads and titles drawn from songs ("19th Nervous Breakdown," "Magic Carpet Ride," etc.). Max Yasgur's farm looms at the end of the summer, but Jessie will miss Woodstock, darn it.

Hilderbrand designs careful family dramas that don't overly rock the reader's boat. Jessie loses her stern old granny's valuable necklace — hooray! it's found! She gets her first period, develops a crush on a cute older boy, who responds to her, then — horror of horrors — crushes on another girl. Blair can't find a dress to fit her bulging tummy. Beautiful Kirby falls for a dazzling African American guy, his parents disapprove of their dating, but they manage to see each other anyway. Hilderbrand plays these moments against a beautiful beachy backdrop, employing a simplicity that renders them tasty and smooth as a frozen custard purchased at a seaside stand.

'Summer of '69' fits neatly into the nostalgic reader's beach bag, right alongside the Chablis and the Coppertone.

Speaking of beach treats, a pleasant feature of Hilderbrand's narrative is specificity about food and drink, sampled in the various boites on the island. Clothing and grooming, too, are painted in such meticulous detail that visualizing the characters is as easy as watching them on TV. Period beach-house settings are spot on: "Sliding screen doors open onto one long room with stark white walls and white beams. The furniture is modern and curvy. Against one wall is a lipstick-red sofa that looks like a woman lying on her side; it's flanked by two shell chairs, one turquoise, one electric lime green."

Oftentimes we don't hunger for a seven-course meal — oftentimes, a light repast will do. Simple, sassy, and continuously engaging, Summer of '69 fits neatly into the nostalgic reader's beach bag, right alongside the Chablis and the Coppertone. Where were you in '69? If you can remember, you weren't there. But if you can't, Hilderbrand suggests you had "White Rabbit" on the radio, a crochet bikini, and designs on that hot guy down the beach.