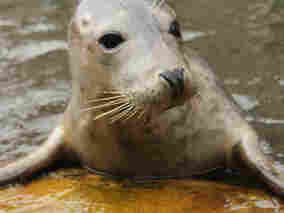 Researchers at Scotland's University of St Andrews have coaxed a seal to "sing" the first notes of the Star Wars theme song and "Twinkle Twinkle, Little Star".

In a video released by the university, a gray seal named Zola hears a computer play the first seven notes of the Star Wars theme, and then barks the tune back, stretching the last two notes.

Amanda Stansbury did the research while earning her Ph.D. at St Andrews under Vincent Janik, the director of the Scottish Oceans Institute.

"What's new about this research is we taught the seals how to imitate new sounds," Stansbury said. "We could have played them any song or any combination of notes."

To teach the seals, Stansbury said she first recorded the seals making their natural sounds. Then she played those sounds back to the seals.

"The seals learned that, hey, if I make the same noise back, I'm going to get a fish," she explained.

Next, Stansbury and Janik used a computer to make small adjustments to the sounds, making the tones higher, and rewarded the seals for matching those new sounds. And then she strung a few of those notes together to play the songs.

"The first time that you hear them actually imitate something recognizable back, it just blows you away," Stansbury said.

Stansbury is now a zoo area supervisor at the El Paso Zoo in Texas.

She said other animals like birds and dolphins are also capable of vocal learning, but seals are unique because they have vocal chords. That might allow for insight into how mammals learn sounds, and help bring new approaches in human speech therapy.

Stansbury said she would have tried longer melodies if she had more time, but she had to release the seal pups into the wild after a year of research.

"We haven't fully studied the full extent and maybe how complex of melodies these guys would be capable of learning," she said.

Certainly, there is more complexity to be mined in the Star Wars theme. Composer John Williams told NPR in 2005 that his music was designed to convey "heroic impulses and feelings and reactions."

Mark Hamill, who played Luke Skywalker in the original Star Wars trilogy, tweeted a link to the video of seals singing and wrote, "Another royalty for John Williams."

"Unfortunately, we don't have any income coming in from this," Stansbury said. "The seals might be able to share some of their fish while they're out there, back in the wild. That's about the only royalties we're going to have for John Williams."