Accessibility links
In Jerusalem, Bolton Defends Trump's Decision To Cancel Iran Strike In Jerusalem, where he's meeting with Israeli and Russian security officials, the national security adviser says the U.S. military is "ready to go" as he warns Iran against seeking a nuclear weapon. 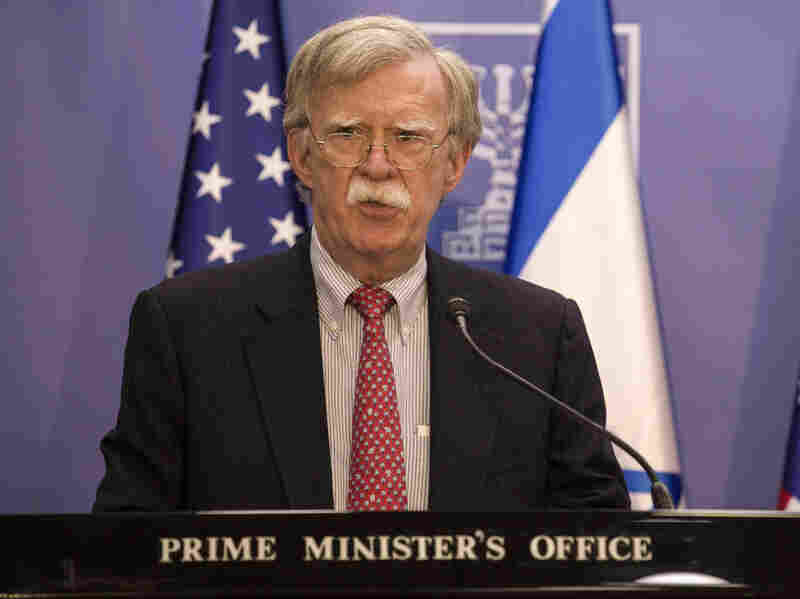 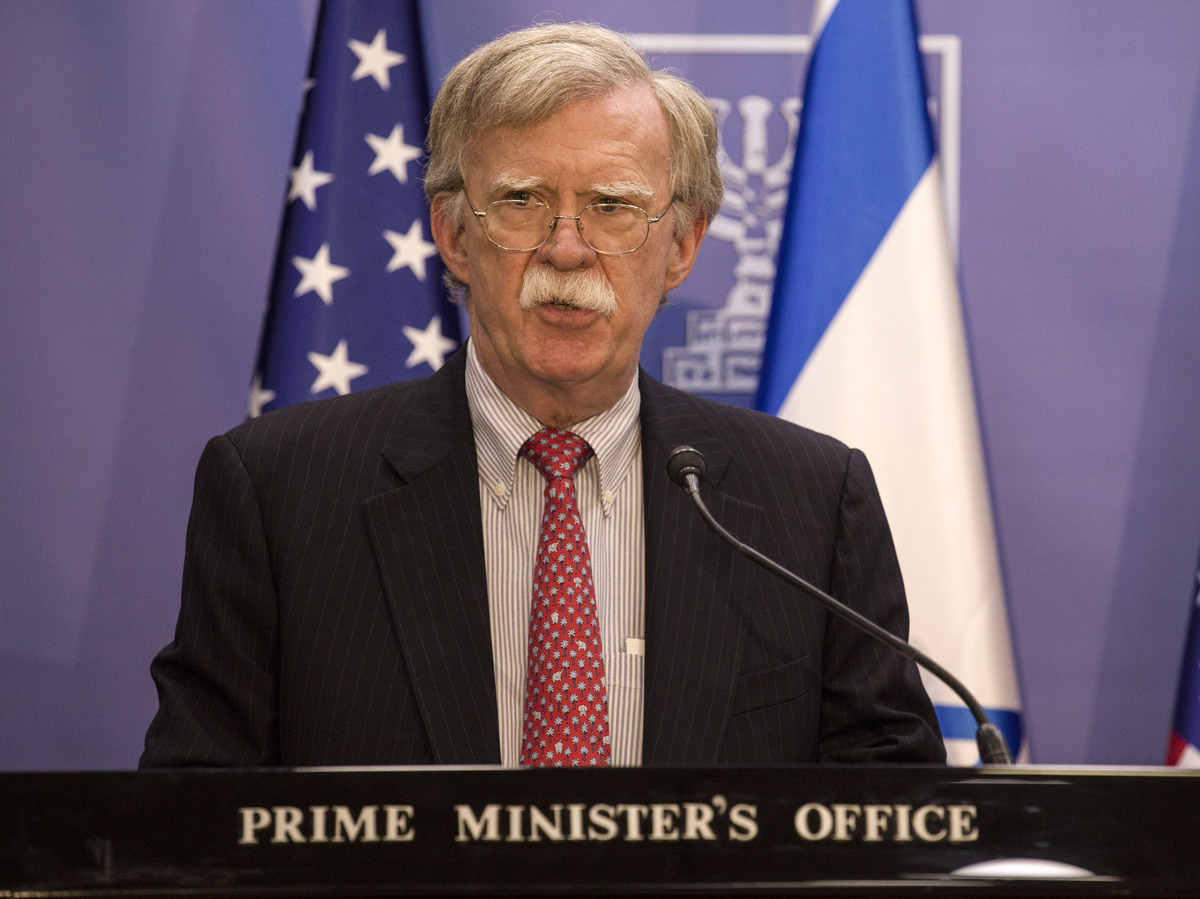 U.S. national security adviser John Bolton speaks to the media in Jerusalem on Sunday. He says the U.S. military is "ready to go."

"Neither Iran nor any other hostile actor should mistake U.S. prudence and discretion for weakness," Bolton said. "No one has granted them a hunting license in the Middle East."

He spoke in Jerusalem alongside Israeli Prime Minister Benjamin Netanyahu. Bolton said he is in the Middle East for previously scheduled meetings with Israeli and Russian security advisers. And he warned Iran that the U.S. remains a formidable adversary.

"Our military is rebuilt, new and ready to go," Bolton said.

Bolton is one of Trump's most hawkish advisers, and he was greeted warmly by Netanyahu. In 2015, the Israeli prime minister waged an aggressive but failed campaign to prevent the Iran nuclear deal from being signed, and cheered Trump's decision last year to withdraw from the compact. On Sunday, Netanyahu said the U.S.-Israel relationship "reached unprecedented heights under the leadership of President Trump."

Even as the U.S. refrained from a physical strike on Iran, the U.S. Cyber Command mounted a digital attack against an Iranian spy group that supported attacks on two foreign-owned oil tankers in the Strait of Hormuz, Yahoo News reported, citing two former intelligence officials. 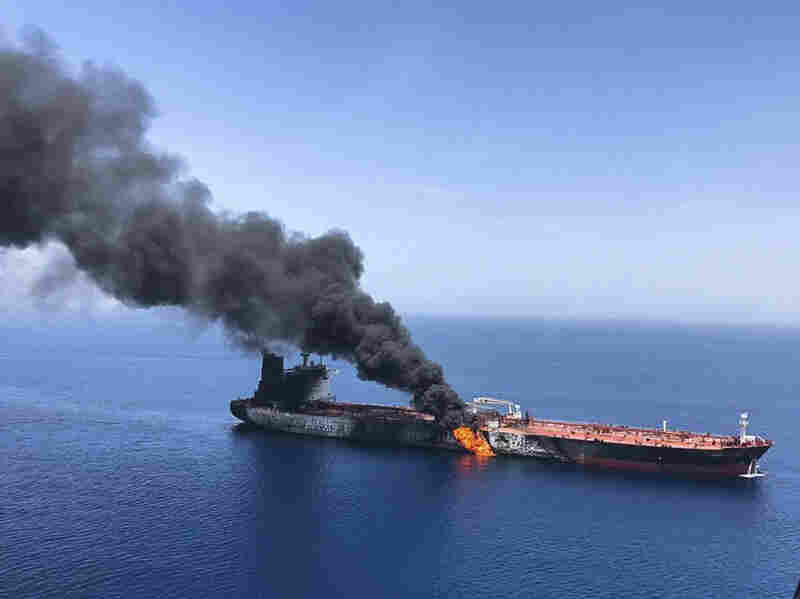 An oil tanker burns in the sea of Oman on June 13. The U.S. says Iran is behind attacks on two oil tankers near the strategic Strait of Hormuz. ISNA/AP hide caption 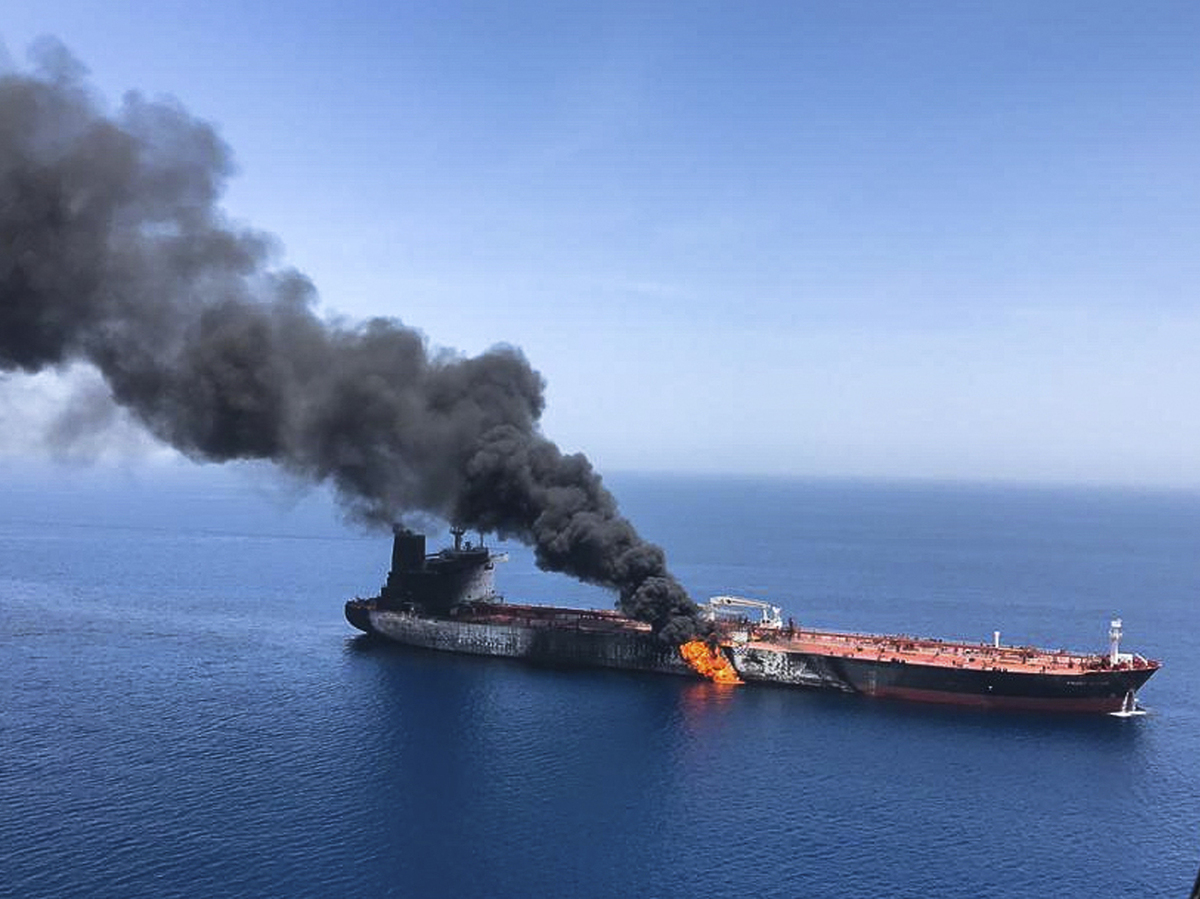 An oil tanker burns in the sea of Oman on June 13. The U.S. says Iran is behind attacks on two oil tankers near the strategic Strait of Hormuz.

U.S. Cyber Command did not respond to NPR's request for comment. Heather Babb, a Pentagon spokeswoman, said, "We do not discuss cyberspace operations, intelligence or planning."

National Security Agency spokesman Greg Julian said in a statement, "There have been serious issues with malicious Iranian cyber actions in the past. In these times of heightened tensions, it is appropriate for everyone to be alert to signs of Iranian aggression in cyberspace and ensure appropriate defenses are in place."

"For the first time, we sent our cyberwarriors abroad," Nakasone said. "We sent defensive teams forward in November to three different European countries. That's acting outside of our borders that impose costs against our adversaries."

Trump has confirmed reports that he canceled a strike on Iran in retaliation for Tehran shooting down an American drone Thursday. He told NBC's Meet the Press on Sunday that the strike plan was in place when he asked the military planners how many casualties it would cause. They reportedly answered that 150 Iranians would be killed.

Why Retaliate Against Iran For Shootdown Of Unmanned U.S. Drone?

Why Retaliate Against Iran For Shootdown Of Unmanned U.S. Drone?

"And I thought about it for a second and I said, 'You know what? They shot down an unmanned drone, plane, whatever you want to call it. And here we are sitting with 150 dead people,' " Trump said. "And I didn't like it."

NPR's Ron Elving has noted the president's telling of the timing of his decision is unlikely.

"The president said he called off the attack with just 10 minutes left to go, and he says he did it because 150 lives would be lost. But what had he thought about that before? Did he think he could order airstrikes and produce no casualties? That may be the plotline on a TV reality show, but it's not the world the real military operates in. It seems more likely he was briefed on casualties much earlier and decided to proceed, and then he changed his mind."

The current tensions with Iran have escalated since Trump withdrew the U.S. from the nuclear deal President Barack Obama signed with European allies. It lifted sanctions in exchange for Iran agreeing to abandon its nuclear weapons program.

Since then, the U.S. has reapplied sanctions on Iran and pressured European allies to avoid doing business with Tehran or face financial penalties.

Iran appears to be fighting back. Earlier in June, two foreign-owned oil tankers were attacked in the Strait of Hormuz. The U.S. says Iran is to blame, a charge Tehran denies.

Trump announced new sanctions on Iran on Saturday, which he said were aimed at preventing nuclear weapons development.

The endgame of the U.S.-Iran tensions is not clear. Bob Corker, who chaired the Senate Foreign Relations Committee when he was a Republican senator from Tennessee, called for caution. Speaking to NPR's Michel Martin on All Things Considered, he said, "There are numbers of people within the administration, as you know, that would like nothing else other than to get into a kinetic war with Iran. I'm sure that the leadership in Israel right now would love to see that happen. And so, you know, I do think we have to be careful as we move down the road."

Bolton's comments in Jerusalem come as he faced withering criticism from Fox News host Tucker Carlson, who accused Bolton of reckless logic in the Middle East.

"The neocons still wield enormous power in Washington. They don't care what the cost of war with Iran is," Carlson said. "When Bolton made it to the White House, the neocons cheered."

"John Bolton is absolutely a hawk. If it was up to him he'd take on the whole world at one time," Trump said Sunday on NBC's Meet the Press. "But that doesn't matter. Because I want both sides."

NPR's Daniel Estrin and Greg Myre contributed to this report.