Accessibility links
At Sunday School, Jimmy Carter Extends Praise To Trump For Restraint On Iran "I agree with President Trump on his decision not to take military action against Iran" Carter said. The former president said peace was a choice. 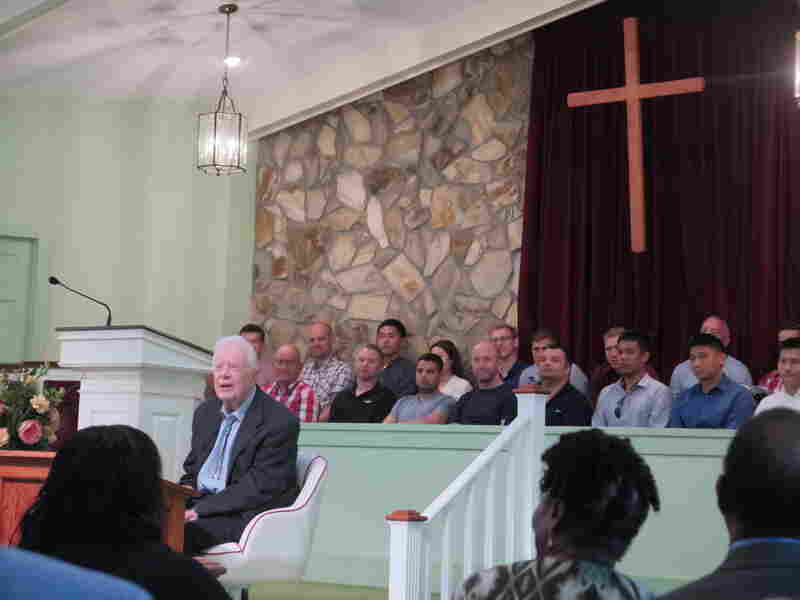 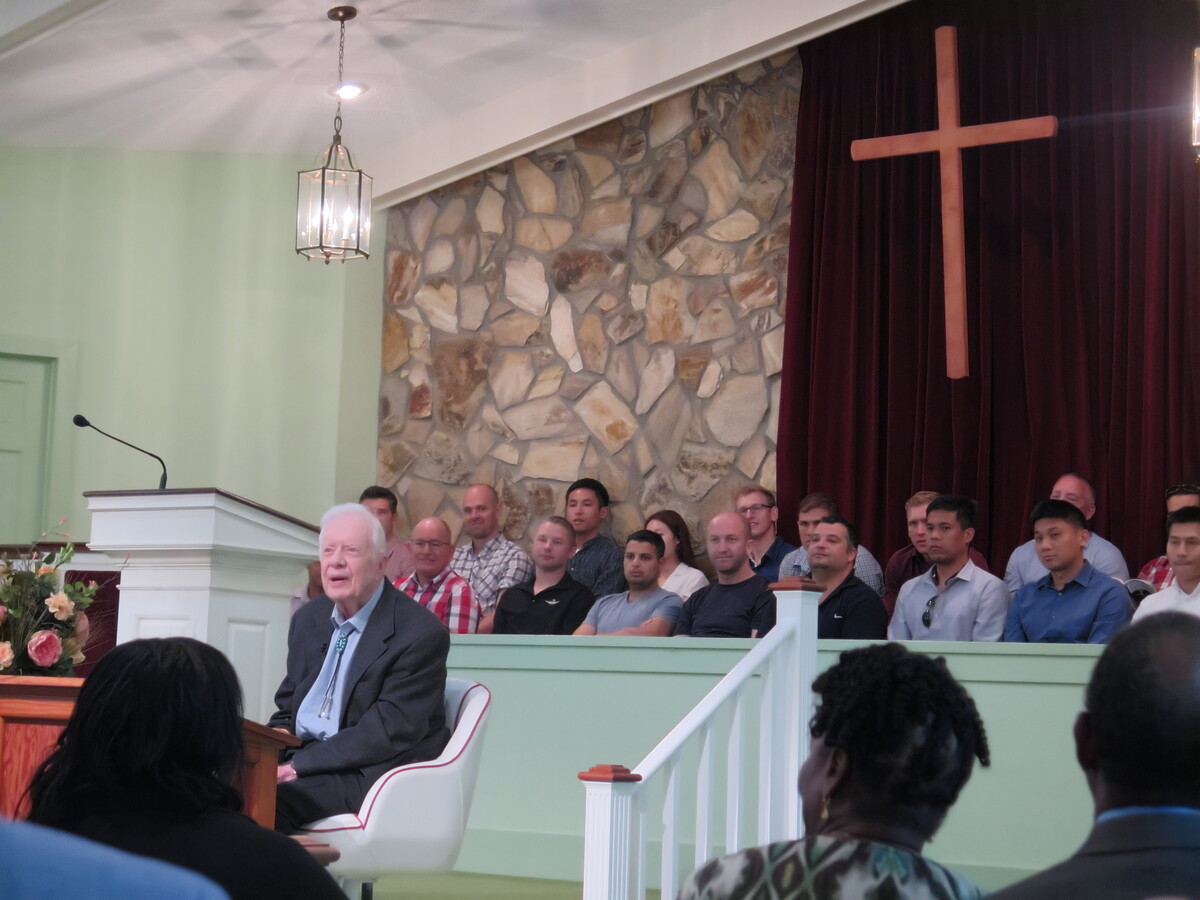 For the second time since breaking his hip a month ago, former President Jimmy Carter taught Sunday school at Maranatha Baptist Church in his hometown of Plains, Ga. this weekend.

Addressing an audience of approximately 500, the 94 year old used his scripture lesson to discuss a topic he is intimately familiar with: Iran.

"I agree with President Trump on his decision not to take military action against Iran," he said. "I had a lot of problems with Iran when I was in office."

Carter's remarks came just two days after President Trump said that he called off a strike on Iran ordered in retaliation for Iran's having shot down a U.S. drone. Trump said he did so after being told that 150 people would likely have died in the attack.

The escalating tensions with Iran have revived memories of the Iranian hostage crisis that dominated Carter's final year in the White House. He reminded the congregation the hostages were embassy staff he had sent to try to make peace with what was then the new Islamic republic, and to establish diplomatic relations with the government.

Indeed, peace has been elusive for the United States for almost all of its history, he said. That's ironic, Carter suggested, given how central the concept of peace is to Christianity.

"We're supposed to be a 'Christian' nation are we not? But we are known throughout the world as the most warlike country on Earth. And I would say almost all the wars in which we've been involved, have been unnecessary," he said.

He made the point that peace would be an important step towards bringing the proverbial kingdom of God to Earth.

"So if God's kingdom was on Earth, we would live totally at peace with each other. Maybe that's an individual choice too," he said. "Not just between nations not being at war, but with a friendly attitude, or a loving attitude to other people that are different than us."

Carter's classes at Maranatha date back to 1981, when he returned to Plains from Washington. The town has a population of more than 700 and the church has a congregation of about 30. But on this Sunday, attendees from all over the world were in Plains to see Carter. As has become typical when Carter is teaching at the church, many of them slept in the parking lot overnight — the first car arrived at 8 p.m.

On Sunday, Carter's message was one that many of those visiting Plains had been hoping to hear.

"As polarized as our country is right now, I wanted to come hear a president that believes peace is possible, even among the most vicious of enemies," said Andy Oliver, a pastor from Florida who traveled to Georgia with his wife and two children. "Just wanted to come and feel inspired this morning. And wanted my son to hear that too."

The praise for Trump, in particular, struck Cathy Smith from Milton, Ga.

"He actually praised another political party, for doing something well, when most people nowadays, they take sides," she said.

"Within the first five minutes he said President Trump is doing something good ... a lot of people would not do that if you're from the Democratic [Party]. That goes to the kind of person he is," she said.

Visitors on Sunday came everywhere from Tunisia to California, from Michigan to South Korea.

"We're a mega-church every other Sunday," said Jill Stuckey, a member of the congregation and superintendent of the national park that comprises many of the Carter monuments in town.

"And a very rural, quiet church the other times."

"It's unbelievable to hear the crowd that comes to hear the truth," said Maranatha Pastor Tony Lowden. "And I believe people come in, searching for the truth. I think Americans all across the country are looking for someone that's going to tell them the truth."