Accessibility links
Mark Hamill Takes On The Iconic Role Of Chucky In Reboot Of 'Child's Play' The murderous doll comes back to life in the reboot of the 1988 horror classic Child's Play. "Good stories are meant to be told over and over," Hamill says of the remake. 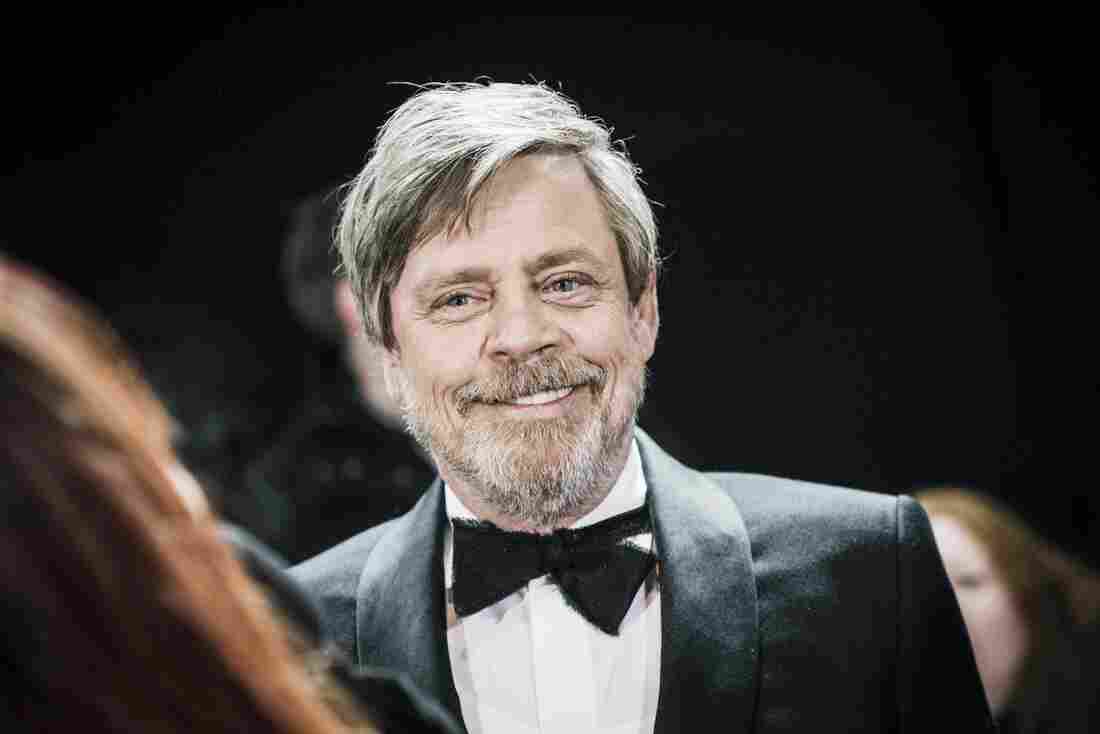 Mark Hamill is the new voice of Chucky — the murderous doll is coming back to life in a reboot of the 1988 horror classic Child's Play. Hamill is pictured above in London in December 2017. Gareth Cattermole/Getty Images for Disney hide caption 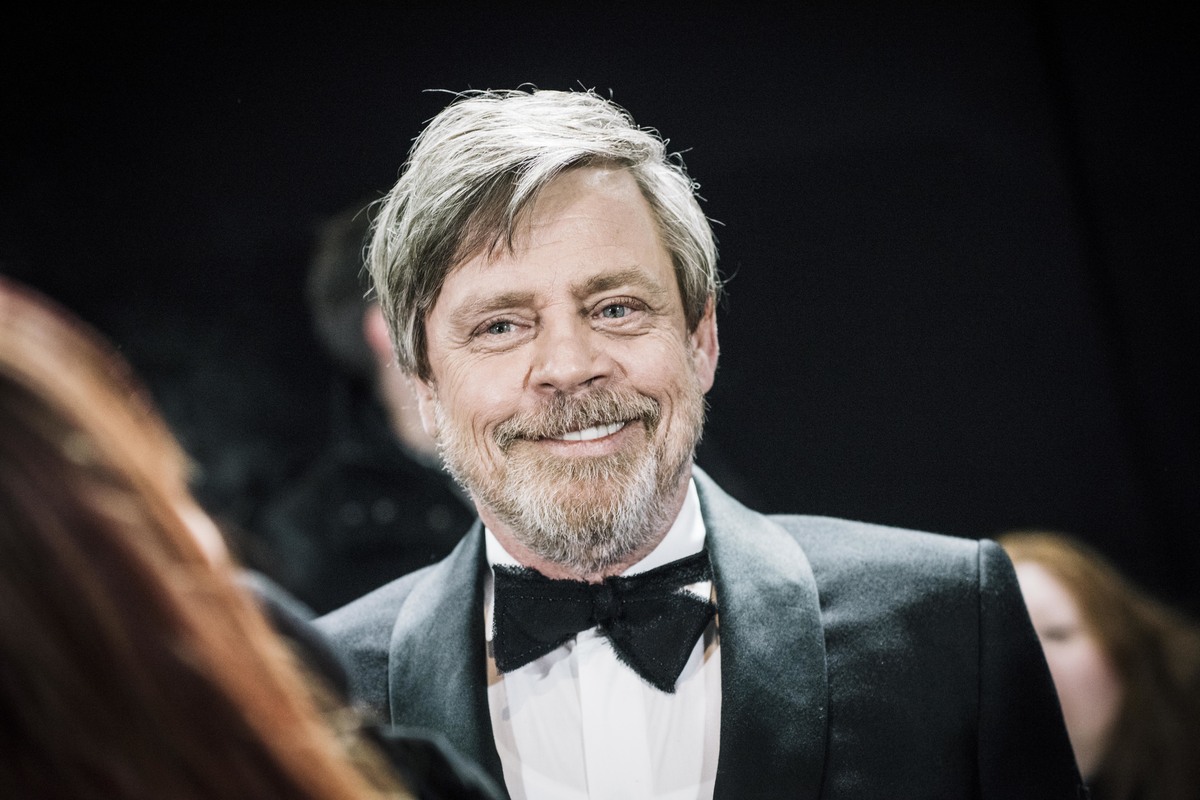 Mark Hamill is the new voice of Chucky — the murderous doll is coming back to life in a reboot of the 1988 horror classic Child's Play. Hamill is pictured above in London in December 2017.

Mark Hamill remembers the first time he learned about voice acting — he was watching a Walt Disney special about animation and he saw Clarence Nash "this guy in a suit and a microphone" doing the voice of Donald Duck. "I must have been five or six and a light bulb went off in my head ..." Hamill says. "Suddenly it occurred to me that somebody gets up in the morning, goes to work, and does Donald Duck for his job. I want that job!"

Hamill has gone on to have some pretty incredible jobs — he played Luke Skywalker in Star Wars, he's the voice of the Joker in Batman: The Animated Series, and now he'll be the voice of Chucky — the murderous doll — in a remake of the 1988 horror movie Child's Play.

Hamill says he's not going to "be doing some Joker-like demonic voice" for Chucky. The whole point is that he should sound innocent. Hamill says he's totally drawn in by the idea of a toy as a force for evil. "Children have imaginations and they run wild," he says.

Hamill has done plenty of acting on screen and on stage, but with voice acting he says, "You can be more emphatic, a little more over the top. ... You're liberated to make choices that you would never make on camera."

On remaking classic movies such as Child's Play

It reminds me of the campfire stories you tell, you know? "It was a dark and stormy night ..." They're just part of our folklore now — telling these stories over and over. ... I only bring this up because there's been a backlash, to a certain extent, from the people that love the originals and don't want us to be doing what we're doing. Hopefully they'll understand that good stories are meant to be told over and over. On the 1963 Twilight Zone episode "Living Doll" which, like Child's Play, features a talking doll that turns out to be alive and evil

I remember seeing this. I couldn't stay up late enough in those days to see it in primetime, but when summer came around, oh you know, I wouldn't miss The Twilight Zone. I'd watch it by myself. ...

It's a 25-minute teleplay. The line that just stuck with me since I was a kid was towards the end of the episode when [the doll] says: "I'm Talky Tina and I'm going to kill you" in that sweet voice. It was so startling. ... The idea of a toy being an evil force is fascinating. ... They're just such a part of your childhood. And you know, alone, at night, when you're trying to go to sleep, and it's on the shelf staring at you with this grin on its face ...

On his early interest in voices and accents

I had a little tape recorder my father gave me for my birthday and I would record Dracula and the Frankenstein films and Laurel and Hardy because I was interested in their accents. ... My father was in the Navy so I went to nine schools in 12 years, so I was used to regional accents. ... I'd listen back [to the audio of the movies] and I'd try and imitate them. I mean, I was a weird kid. What other nine-year-old says: "Let me make this perfectly clear." They'd go, "Yes, that's a good Richard Nixon, go do your homework."

The actors in voice over are some of the best I've ever worked with: on screen, on television, on Broadway, off Broadway — they're just incredibly talented. Not only that, a lot of them have come from the world of stand-up comedy or improv, you know, Second City, Groundlings, Upright Citizens Brigade. They're so versatile and some of them are just brilliant mimics or impressionists. Like Maurice LaMarche — he doesn't sound like Orson Welles, he is Orson Welles.

On auditioning to be the voice of The Joker in Batman

One of the things that really helped me in that audition was, a lot of times, if you really want something, your neediness comes through a bit. It's uncomfortable, your timing can be off, it can make the people watching you uncomfortable. ...

[The audition] came right in the wake of the backlash to Michael Keaton sight unseen being rejected by fandom as Batman — "Oh, he's Mr. Mom, he can only do comedy." ... I went in thinking: You think the Michael Keaton backlash was bad? What are the fans going to think when this icon of virtue, Luke Skywalker, is announced to play this icon of villainy? ... So I looked at it as an acting exercise. ... Even if you're not right for the part. You should go and do it, it's all part of the learning experience. It's all part of something that you can use in the future.

I went in knowing that they couldn't hire me. They just couldn't. ... I went in and I had no anxiety at all. I thought the only thing I can do was make them really sorry that they can't hire me. ... I had a lot of laughs in my arsenal because I just spent a year on [the Broadway production of] Amadeus. You can't change the dialogue in a play, but you can play with the laugh. ...

The thing that was so funny: I went from being completely cocky — I was driving out of the parking lot going: "Hah! Top that! That's the best Joker they're ever going to hear!" And then when you get [the part], you go, "Oh no!"

On hearing from Star Wars fans

I never tire of hearing these stories. ... People come up and say: "This got me through my mother's illness." "This is where I met my husband on line waiting to get tickets." ... Parents tell their kids: "Don't talk to strangers" — and then when you become known all around, it's like the whole world is your friend. They all tell me what it meant to them, how it's inspired them, whatever it is. And I never get bored with it. It's astonishing to me, and sometimes really moving to hear how it affected their lives.

Danny Hajek and Peter Granitz produced and edited this interview for broadcast. Andee Tagle and Beth Novey adapted it for the Web.