Accessibility links
What Are Iran's Options In The Standoff With The U.S.? Iran shot down a U.S. drone. The U.S. launched a cyberattack and put new sanctions on Iran. Here is a look at the deepening crisis from Iran's standpoint. 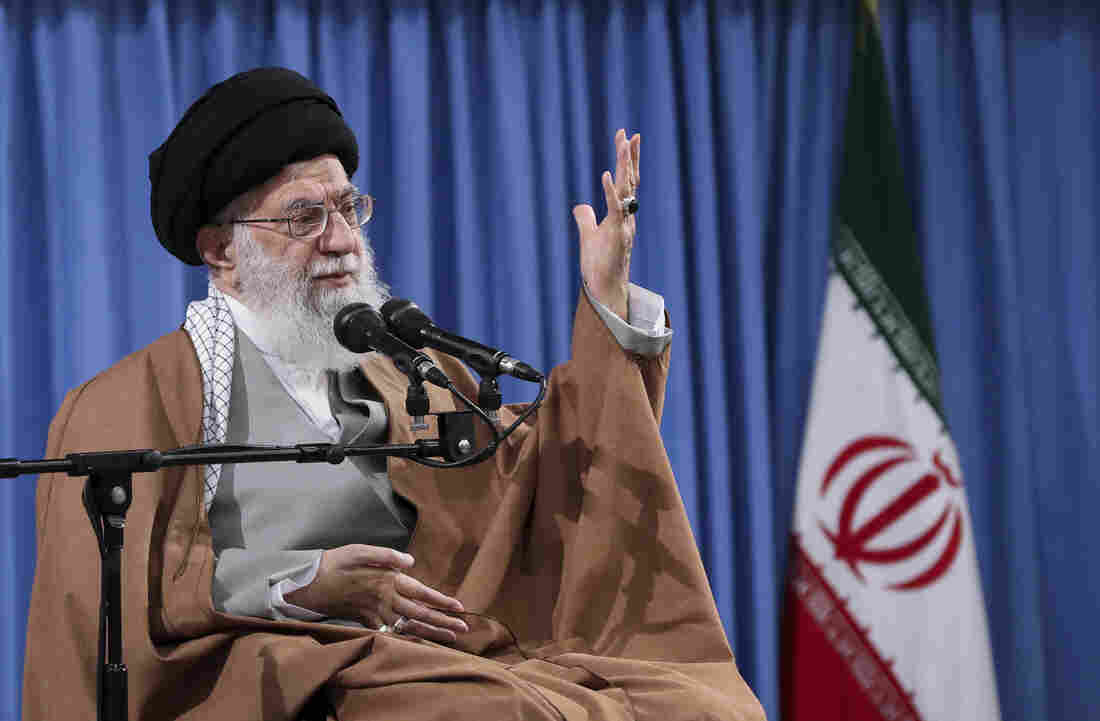 Iran's supreme leader, Ayatollah Ali Khamenei, speaks with a group of Revolutionary Guards and their families in Tehran on April 9. Tensions between Iran and the U.S. have escalated recently following Iran's shootdown of a U.S. drone and U.S. cyberattacks against an Iranian intelligence group. On Monday, President Trump announced financial sanctions against Khamenei and other top officials. Office of the Iranian Supreme Leader via AP hide caption 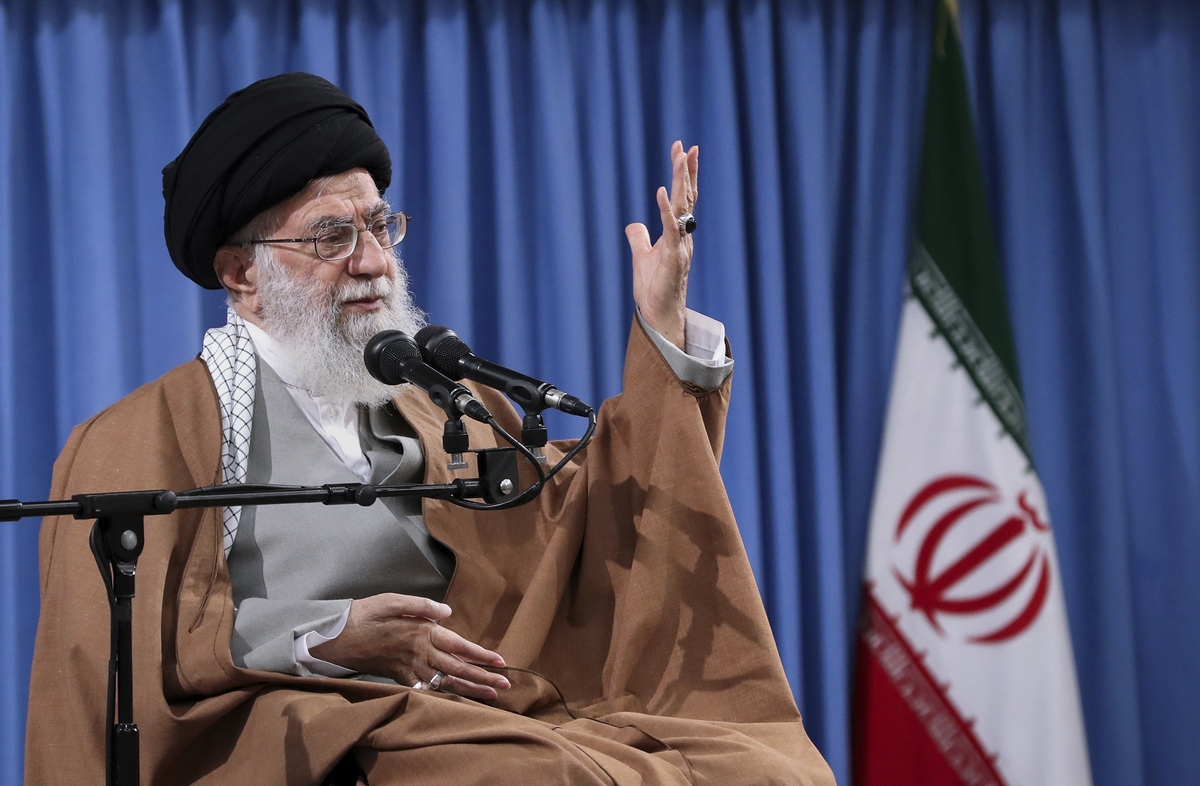 Iran's supreme leader, Ayatollah Ali Khamenei, speaks with a group of Revolutionary Guards and their families in Tehran on April 9. Tensions between Iran and the U.S. have escalated recently following Iran's shootdown of a U.S. drone and U.S. cyberattacks against an Iranian intelligence group. On Monday, President Trump announced financial sanctions against Khamenei and other top officials.

Office of the Iranian Supreme Leader via AP

Tensions continue to rise between the United States and Iran following last week's sharp escalation in which Tehran downed a U.S. drone and the U.S. conducted cyberattacks against an Iranian intelligence group.

The supreme leader later said it marked "the permanent closure of the path of diplomacy," while Iranian President Hassan Rouhani called the move "outrageous and idiotic."

Earlier in the day, Iranian Foreign Minister Mohammad Javad Zarif reportedly told his country's lawmakers that Iran will continue to stand firm against U.S. sanctions and threats "with full power." An Iranian navy chief also warned that the country would shoot down more of America's surveillance drones if they violated Iran's airspace.

The escalation of tensions comes more than a year after Trump pulled the U.S. out of the 2015 Iran nuclear deal and reapplied heavy economic and diplomatic pressure against the country. The administration says the "maximum pressure" campaign is designed to draw Iran back to negotiate a new, tougher deal, which Iran has so far rejected.

Here is a look at the tense standoff from Iran's standpoint.

Why did Iran shoot down a U.S. drone?

Last Thursday, Iranian forces shot down a U.S. unmanned aircraft with a surface-to-air missile over the Strait of Hormuz, a stretch of water between the Persian Gulf and the Gulf of Oman. Iran claimed the drone had entered Iranian airspace.

Washington denied that and released images that U.S. officials said showed the drone's flight path appearing to be in international waters close to Iran.

Iranian officials then held a news conference and displayed what they said were pieces of drone wreckage collected in Iran's territorial waters.

The shootdown was the most dramatic moment in the Trump administration's "maximum pressure" campaign against Iran. Trump said the military was about to strike Iranian targets on Thursday in retaliation for the drone shootdown but he called off the strike.

"The downing of the U.S. drone had an explicit, decisive and clear message that defenders of the Islamic Iran's borders will show decisive and knockout reactions to aggression against this territory by any alien," Maj. Gen. Hossein Salami, a commander of Iran's Revolutionary Guard, said hours after the shootdown, according to the semiofficial Tasnim news agency.

What does Iran want out of all this?

The world's seventh-largest oil producer last year, Iran wants to be able to sell its oil freely, without the pressure of U.S. sanctions cutting off many of its usual markets. Countries such as Russia and China have continued their trade with Iran. But the Trump administration says its goal is to "bring Iran's oil exports to zero," something Tehran has vowed will never happen. Under the sanctions, European buyers and others struggle to find a way to protect companies that may want to continue doing business with Tehran without being penalized by the U.S. and losing access to the lucrative U.S. market.

Ultimately, Iran wants to be treated as a major Middle Eastern power whose interests must be respected. The Trump administration says that for Tehran to enjoy normalized relations, it has to meet a dozen demands, including stopping support for militias in Iraq, Lebanon, Afghanistan, Yemen, Syria and the Palestinian territories, as well as halting uranium enrichment and ballistic missile systems. Iran has rejected these terms.

What are the divisions in Iran?

Iranian politics are marked by divisions — most notably between moderates and hard-liners. President Hassan Rouhani, whose administration negotiated the nuclear deal with the U.S., European countries and other world powers, is sometimes considered a moderate in comparison with Khamenei, Iran's supreme leader.

But in fact Rouhani is no moderate. Another term often used to describe him — "pragmatist" — might be more accurate. Rouhani is a confirmed supporter of the Islamic Revolution that brought Iran's cleric-led government to power in 1979.

The main difference between Rouhani and the hard-liners is Rouhani's willingness to engage with the outside world to achieve Iran's goals. During the Obama administration, with the prospect of sanctions relief in sight, even Khamenei gave grudging support to the nuclear negotiations.

But after Trump pulled the U.S. out of the deal, Khamenei declared that Iran should never negotiate with America, because its word can't be trusted.

What are Iran's options?

After the U.S. exit from the nuclear deal in May 2018, Iran could also pull out of it, something the remaining signatories — which include European countries, Russia and China — want to avoid.

Then there is Trump's stated desire for talks with Iran. U.S. officials say they believe sufficient pressure will bring Iran back to the table. But so far, Iran's supreme leader has refused new talks with the U.S., and Iranian government officials also say they will not negotiate under the current conditions.

In an interview with NPR last week, Iran's ambassador to the United Nations, Majid Takht Ravanchi, said, "You cannot negotiate with somebody who has a knife in his hand putting the knife under your throat."