Accessibility links
USWNT: In Women's World Cup, U.S. Battles To Beat Spain It wasn't easy, pretty or elegant, but the American team will advance to play host France on Friday. 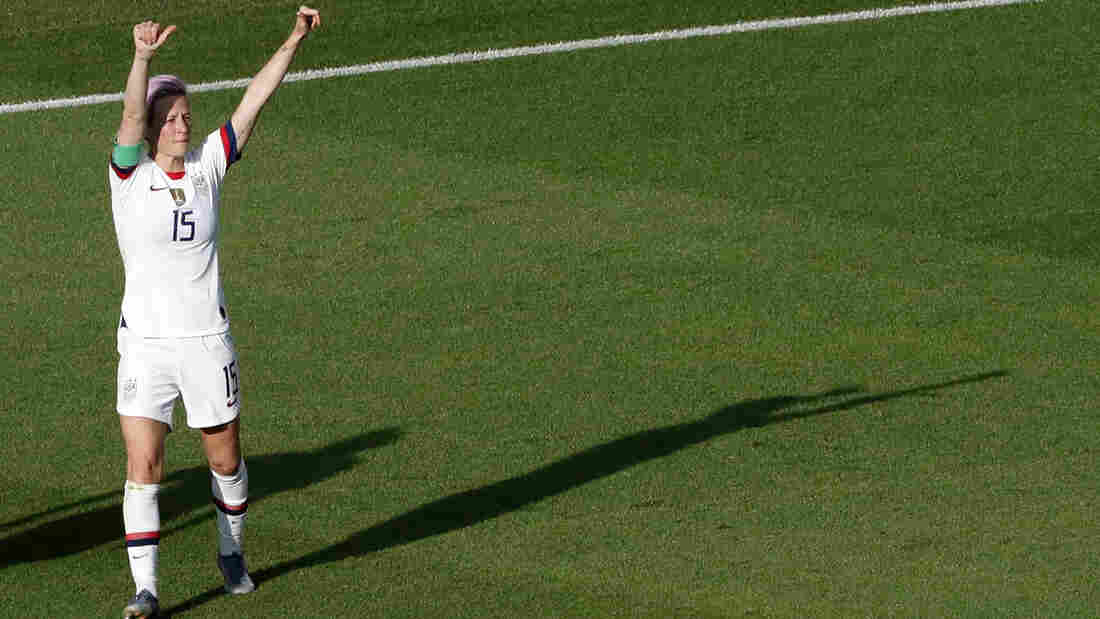 In the 76th minute of the game, United States' Megan Rapinoe powered the ball low and to the left giving the U.S. a 2-1 lead. Thibault Camus/AP hide caption 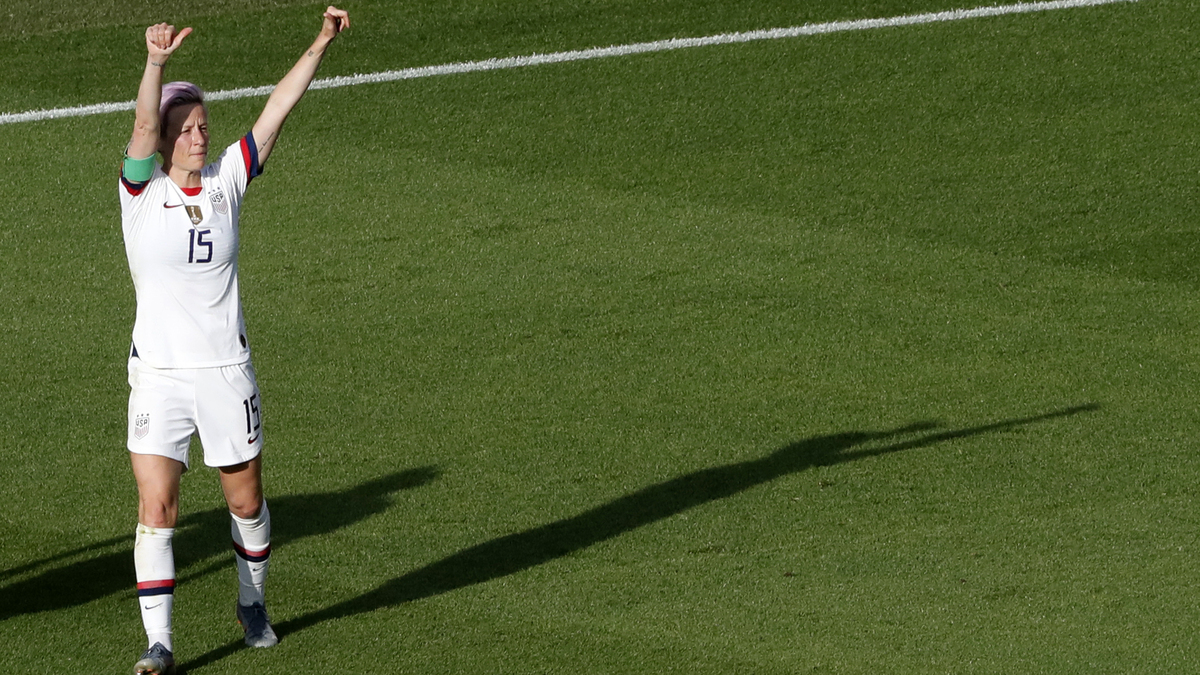 In the 76th minute of the game, United States' Megan Rapinoe powered the ball low and to the left giving the U.S. a 2-1 lead.

It wasn't easy, pretty or elegant. But the U.S. Women's National Team battled to beat Spain in the round of 16 at the Women's World Cup. The U.S. had an easy road in this tournament. Until Monday. Spain, playing in its second World Cup, looked like it had been there many times before. But in the end, it was not enough. The U.S. defeated Spain 2-1.

Spain started aggressively and came out on the attack in the opening minute — challenging the U.S. defense. But the U.S. struck first. Tobin Heath was tripped in front of the Spanish goal for a U.S. penalty kick. Megan Rapinoe hammered the ball low and to the left in the seventh minute. But the lead did not last long.

Spain came right back after U.S. goalkeeper Alyssa Naeher made a short and ill-advised pass to Becky Sauerbrunn that Spain intercepted and led to a beautiful strike by Jennifer Hermoso to tie it 1-1 (that was the first goal the U.S. had allowed in 647 minutes of play)

Alyssa Naeher plays Becky Sauerbrunn the ball despite #ESP's high pressure, and the #USA pays the price. Quite a finish by Hermoso, too

Both sides battled back and forth during a tense and physical first half. U.S. forward Alex Morgan was knocked to the turf a half-dozen times (and the knockdowns of the star U.S. striker continued in the second half). It was the fourth sell-out of a U.S. game at this tournament and the decidedly pro-U.S. crowd was anxious as Spain made run after run in the U.S. backfield (and watching Spain trip up U.S. players all game long).

It’s 1-1 at the half. Spain, in its World Cup debut, is giving the 3-time-champion US team a real challenge in this round of 16. And US fans seem stunned. #USAvESP #WWC2019 pic.twitter.com/wgE8VyGCEb

Spain is the toughest opponent the top-ranked U.S. had faced in the Women's World Cup. Questions had swirled this tournament about a relatively untested U.S. defense. Spain had several chances and challenged the back line all game long but the Americans did not break.

It was in the 76th minute when the U.S. broke the tie. Rose Lavelle was brought down in the box after a light challenge by a Spanish defender that may or may not have have hit Lavelle's leg. Megan Rapinoe took her second penalty kick of the game. And, like in the first half, she powered the ball low and to the left giving the U.S. a 2-1 lead.

In a post-match interview on FS1, U.S. Head Coach Jill Ellis looked relieved, "You can talk tactics. You can talk everything. But just the heart and the grit and the resolve. That's a big part of World Cup soccer. No game is ever easy in this tournament. We know that. We learn that and so part of that is the mental piece and I thought we were great tonight."

The U.S. had never lost a World Cup game when it scored first. And it had always made it to at least the semifinals in every WWC. The three-time and defending 2015 champions next play on Friday. It's a game that's been anticipated all tournament long: U.S. taking on host country France in the quarterfinals.

A previous version of this story incorrectly said Spain is playing in its first-ever World Cup. This is actually Spain's second cup appearance.