Accessibility links
1st Democratic Debate: Medicare-for-all And Trade Policy Could Create Conflict It's not just "Medicare-for-all" or the Green New Deal that will spark differences among candidates. Trade marks a big divide wedged by the Trump agenda. And what would each tackle first as president? 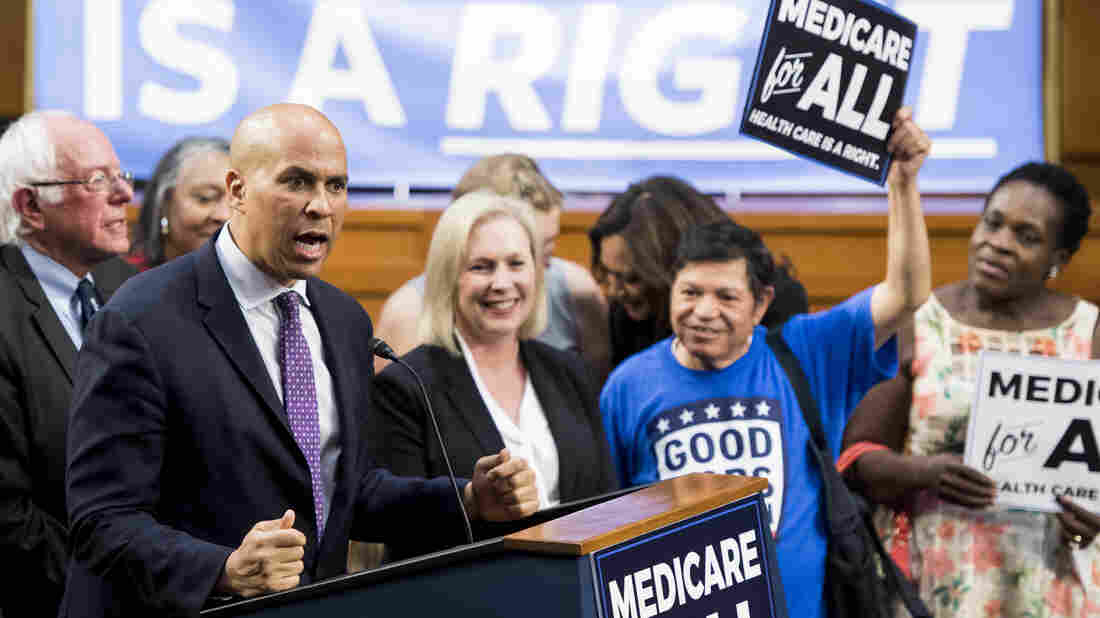 Sens. Cory Booker and Kirsten Gillibrand are among the presidential candidates to back Sen. Bernie Sanders' "Medicare-for-all" legislation, but even some Democrats who co-sponsored it have welcomed other policies. Bill Clark/CQ-Roll Call/Getty Images hide caption 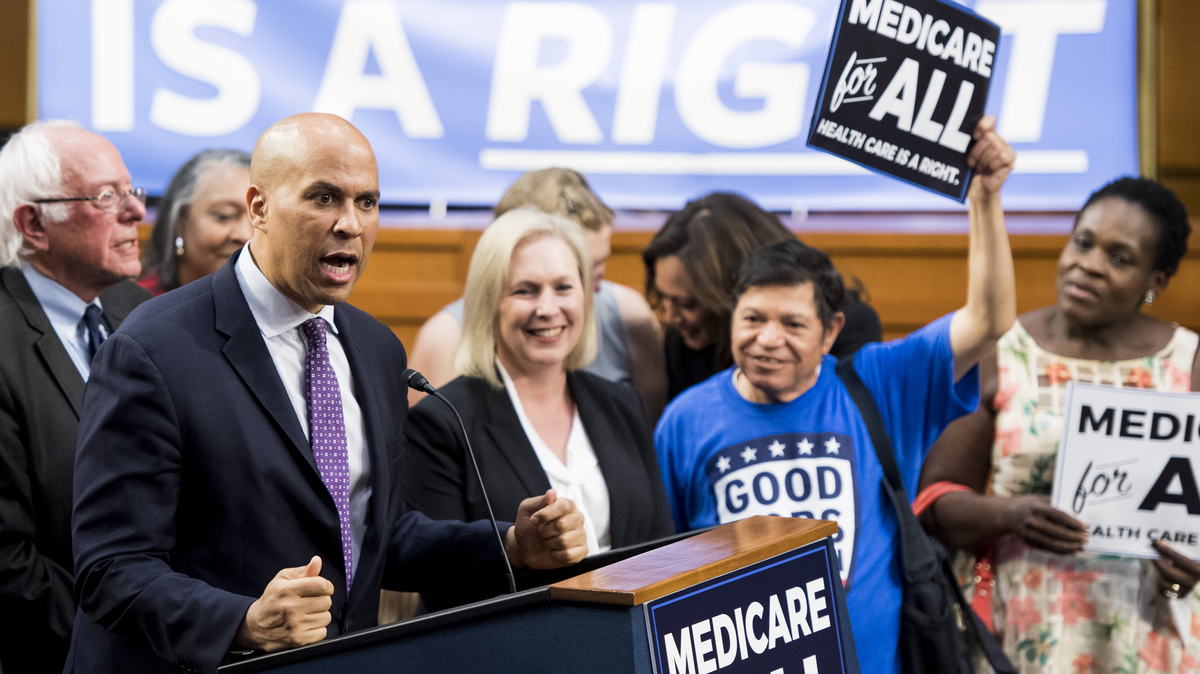 Sens. Cory Booker and Kirsten Gillibrand are among the presidential candidates to back Sen. Bernie Sanders' "Medicare-for-all" legislation, but even some Democrats who co-sponsored it have welcomed other policies.

On Wednesday and Thursday, 20 candidates will take the Democratic debate stage to talk about a wide range of policy topics. And 20 candidates times dozens of policies equals a lot to keep track of.

It's true that, these being Democratic candidates, there's a lot they all agree on — taking action on climate change, for example, or improving the health care system. But this debate is the first time we'll see them next to each other, coming into direct conflict over what, exactly, they disagree on.

Democratic Debate Lineup: See Who Will Face Off

With all that in mind, what follows is a primer on the main policy questions we'll be watching for at the first Democratic debates.

1) Health care: What, specifically, do the candidates want?

Sen. Bernie Sanders' "Medicare-for-all" plan has played a huge role in setting the terms of the health care conversation. That plan is a single-payer plan, meaning it would create a government-run insurance program financed by taxpayers.

Four of Sanders' Democratic opponents have signed on as "Medicare-for-all" co-sponsors in the Senate, and three have co-sponsored a House single-payer bill. But that doesn't mean they've all landed firmly on Sanders' plan as the best option. California Sen. Kamala Harris, for example, has waffled on whether she would be in favor of eliminating private insurance — and "Medicare-for-all" would virtually eliminate private insurance.

One reason this matters: Polls show that many voters don't entirely understand "Medicare-for-all." When they do find that out, polling has shown, support tends to drop. So one important question is whether candidates would be OK with that kind of dramatic step.

And if not, what sort of plan do they want? Some candidates, like Massachusetts Sen. Elizabeth Warren, are open to "Medicare-for-all" as well as other options. Others, like Minnesota Sen. Amy Klobuchar, have said a public option in addition to private insurance is best for now. Pinning all the candidates down on exactly how big of a change they want to make will be a huge question.

2) Climate change: How much daylight between candidates?

After being a lower-tier issue for years among Democrats, climate change has taken center stage. And a lot like "Medicare-for-all" in the health care debate, the sweeping Green New Deal has set the terms of the climate discussion.

Except the Green New Deal isn't a policy — it's more of a broad framework that sets out big goals. So a thing to listen for at the debates is how specific candidates get — and, in the process, how much they end up differing from each other — on what, exactly, to do about climate change. How much federal money would they spend? What role could nuclear energy play? Is a carbon tax part of the plan?

3) Immigration: How far will they go beyond criticizing Trump?

The Trump administration's family separation policy, as well as the conditions in facilities holding migrant children, have angered many Americans — Democrats especially. So when immigration comes up at the debates, you can expect candidates to castigate the Trump administration for these policies.

But the question is what else they suggest doing beyond reversing President Trump's policies. What might a path to citizenship look like? Do they plan to amp up personnel to deal with the backlog of immigration and asylum cases? Do they want to expand border security or border barriers?

In addition, many people coming to the United States illegally are fleeing some sort of terrible circumstances in their home countries — economic ruin, for example, or gang violence. So what would any of these prospective presidents want to do to try to change those conditions abroad, particularly in Central America?

Trade is an area where there's room for Democratic candidates to really differ. As vice president, Joe Biden — along with plenty of Democrats — pushed the Trans-Pacific Partnership, a massive deal meant to open up Asian markets and attempt to set the rules for China.

But this created a big rift within the left, as figures like Sanders and Warren were staunchly opposed to the deal, saying it was bad for American workers. Hillary Clinton eventually came out against it in her 2016 primary run against Sanders.

And that message — that trade hurts American workers — is one that President Trump ran heavily on in 2016. In fact, Sanders and Warren both applauded Trump's exit from the Trans-Pacific Partnership.

So when trade deals come up, they have the potential to open a clear divide in the pool of Democratic candidates.

As with immigration, it could be easy for Democrats to simply blast Trump's actions. But if the debates dig into what they would actually want to do once in office — Try to get into more multilateral deals, like the Trans-Pacific Partnership? Repeal all of Trump's tariffs? — it could lead to some genuine disagreements on the stage.

5) Foreign policy: Which fires to put out and in what order?

All these candidates are auditioning to be commander in chief at a time of growing international tensions — most notably, the recent escalating tensions with Iran, almost culminating in U.S. strikes and eventually new sanctions.

So these candidates could face some tough questions: How would the U.S. deal with Iran? Was it wrong for Trump to sit down with Kim Jong Un? How do you stop election interference by Russia and others?

It's not just about enemies and frenemies either. Candidates must also consider how they would repair relationships with allies that Trump has strained, as well as how they might want to improve America's standing in the eyes of the world.

6) Race-conscious policies: How would you alleviate racial inequality?

The topic of reparations has become a key economic policy issue in the 2020 campaign. Many of the Democratic presidential candidates support H.R. 40, a House resolution to create a commission to study reparations for African Americans.

It's a policy that could prove divisive among voters; an April poll from Fox News found that just over half of Democrats approve of reparations, and that only one-third of Americans do.

Beyond that, candidates take different tacks in how they would specifically work to benefit racial minorities.

Some have explicitly race-based economic proposals, like Warren's plan to boost minority-owned small businesses. Other proposals, like Sen. Cory Booker's "baby bonds" proposal, are race blind but would stand to particularly boost black and Hispanic Americans.

7) Priorities: What will the candidates throw their weight behind?

Each of these candidates has taken positions (or made vague pronouncements) on dozens of issues. But they can't do everything — overhauling health care, criminal justice, democratic procedures and tax policy in one term would be virtually impossible.

So they'll have to prioritize. And one thing we're watching closely for is what candidates would tackle first. What issues are so important that they would spend their precious political capital on them right after inauguration?