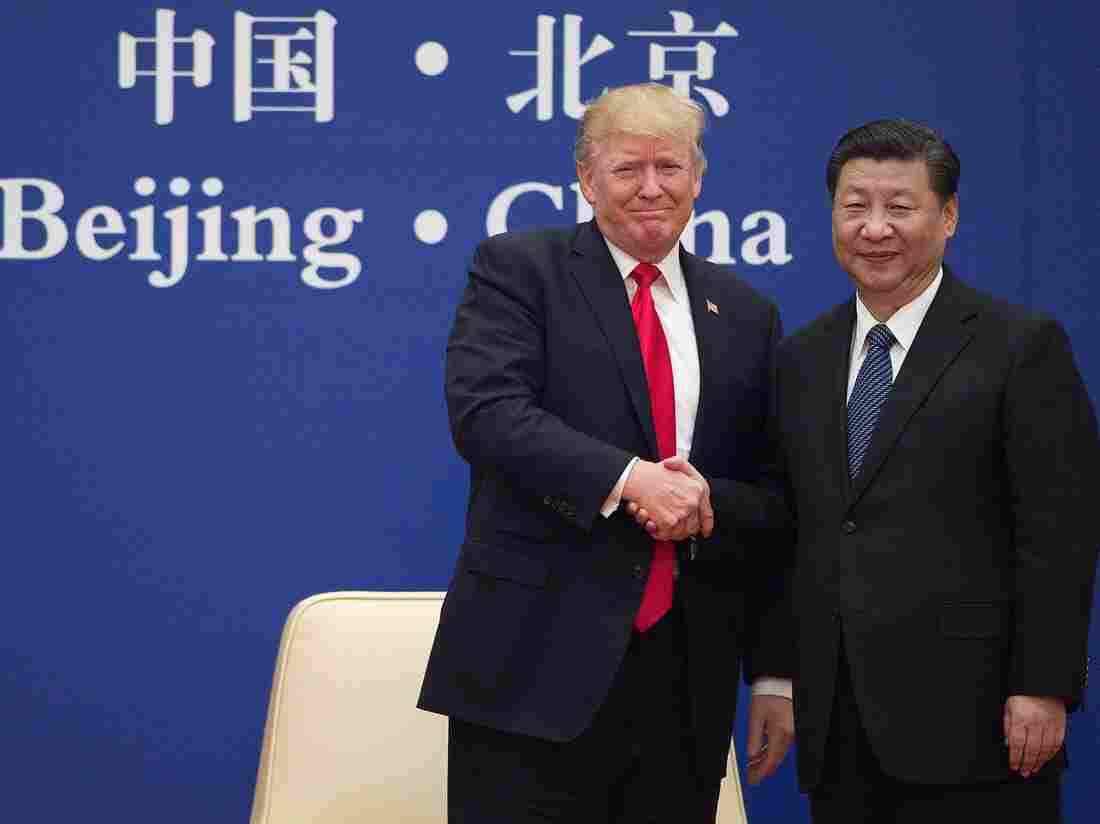 President Trump and Chinese President Xi Jinping shake hands during a business leaders event in Beijing on Nov. 9, 2017. The two leaders are expected to discuss trade at this week's Group of 20 summit in Japan. Nicolas Asfouri/AFP/Getty Images hide caption 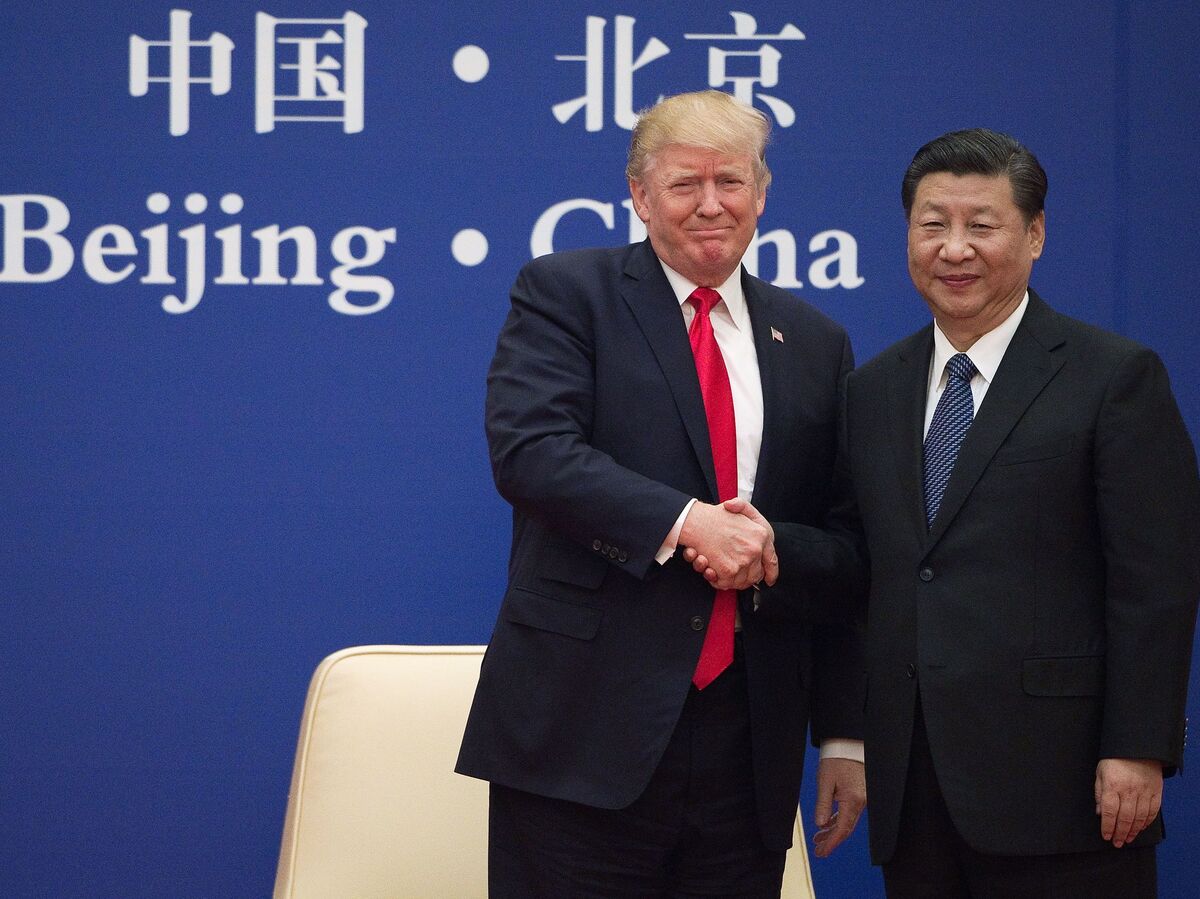 President Trump and Chinese President Xi Jinping shake hands during a business leaders event in Beijing on Nov. 9, 2017. The two leaders are expected to discuss trade at this week's Group of 20 summit in Japan.

Humiliation. In China, it is a word laden with history and identity that is playing a role in the high-stakes trade war between the U.S. and China.

This month, I was visiting China with a small group of journalists for 10 days, and the word "humiliation" came up over and over again in conversations both public and private, in meetings with top government officials, university scholars, think tankers and corporate executives.

The Chinese clearly like to play the humiliation card. Almost all of them shared the feelings of disrespect and humiliation that course through them when President Trump accuses the country of going back on its word or threatens President Xi Jinping with tariffs. Both country's leaders go head-to-head this week at the Group of 20 summit in Japan.

"The only thing we ask the U.S. to do is respect us," said Yu Dunhai, deputy director general at China's Ministry of Foreign Affairs. "If bullied, China will not simply kneel before the U.S."

It's worth noting that Yu began his meeting by talking about how China "is an old country with 5,000 years of history."

It is this ancient history that the Chinese are very proud of, and they consider a century-long period of subjugation by foreign powers from the 19th to 20th centuries an aberration — 100 years of humiliation.

That period was an accumulation of defeats at the hands of foreign powers, starting with, among other things, the Opium Wars and the British in 1842, the French in 1885 and finally the Japanese at least three times, which finally ended with World War II in 1945.

Zheng Wang, a scholar of China's politics and foreign relations, zeroes in on four Chinese characters that are etched into national sculptures and monuments and painted on walls all over the country. The four characters, wu wang guo chi, can be literally translated as "Never forget national humiliation." Zheng, who wrote a book with the same title, Never Forget National Humiliation, calls it China's national phrase.

While this phrase long existed in Chinese culture, it gained in influence specifically after the 1989 student protests and subsequent crackdown at Tiananmen Square. Zheng says that after that revolt, Communist Party leaders decided the population's views about the country and its values needed to change, and the party launched a dramatic reworking of the country's education system.

"They issued new textbooks and launched a patriotic education campaign," says Zheng, a professor in the School of Diplomacy and International Relations at Seton Hall University.

Zheng says he visited China's primary schools, read its history textbooks and traveled the country. In the Communist Party's ideological reeducation of the country's population, humiliation by foreign powers is a strong emotional underpinning of the country's national identity.

No matter what the narrative, China can hardly call itself a victim today. It is no longer a Third World country. In fact, China is the world's second-largest economy and hardly cowers under Western domination. It has multibillion-dollar global companies and is the world's largest surveillance state, trained upon its own citizens.

In recent decades, China has been quite comfortable throwing its weight around, especially when it comes to forcing foreign companies to share their technical know-how.

Zheng points out that in 1989, China's per capita gross domestic product was $304. Last year, that measure, which is generally considered a reflection of a country's standard of living, was around $10,000.

"In one generation, there's been a dramatic development in living standards, and people are very proud of this accomplishment," Zheng says.

However, he notes, that doesn't change how the Chinese view their place in the world. In fact, because of their accomplishments today, Zheng says, there is a feeling that "other countries have to respect China."

I met with a broad spectrum of players and intellectuals, and the message was indeed a version of that sentiment.

Yu, from China's Foreign Ministry, said of the U.S.: "We need to treat each other equally."

Zha Daojiong, a professor of international studies at Peking University, said asking China to surrender is "demeaning and not going to work."

This is the reason that the Xi-Trump talks are not just about dollars and cents but about image and national pride. It makes Xi's job even tougher as he heads into what Trump calls an "extended meeting" at the G-20 summit. The two leaders' high-stakes trade talks come amid the threat of additional tariffs on $300 billion of Chinese goods imported into the United States.

Trade talks with China hit an impasse last month after Trump accused Beijing of reneging on provisions of a tentative agreement. The two countries have since escalated the trade war.

Xi is considered one of the strongest leaders of China in decades. Last year, China's laws were changed to effectively allow him to remain president for life.

But, given the country's image of itself, Xi has to avoid anything that has the semblance of humiliation even though he is meeting a world leader who has shown no qualms about humiliating others. Allowing the trade war to escalate even further would likely damage China's already slowing economy.

What complicates all of this is that Trump's own image is also fragile. He can't come out of any meeting with the Chinese with the impression of being taken advantage of.

If Xi caves in to Trump's threats, he risks not just looking weak but as bowing to humiliation rained down from the West once again. But the cost of angering Trump could jeopardize the economic miracle that is China.