Accessibility links
'You Don't Own Me,' A Feminist Anthem With Civil Rights Roots, Is All About Empathy Ever since a 17-year-old Lesley Gore sang it in 1963, the coolly mutinous song has moved women to reject passive femininity. Its writers, though, say there are layers of resistance in its words. 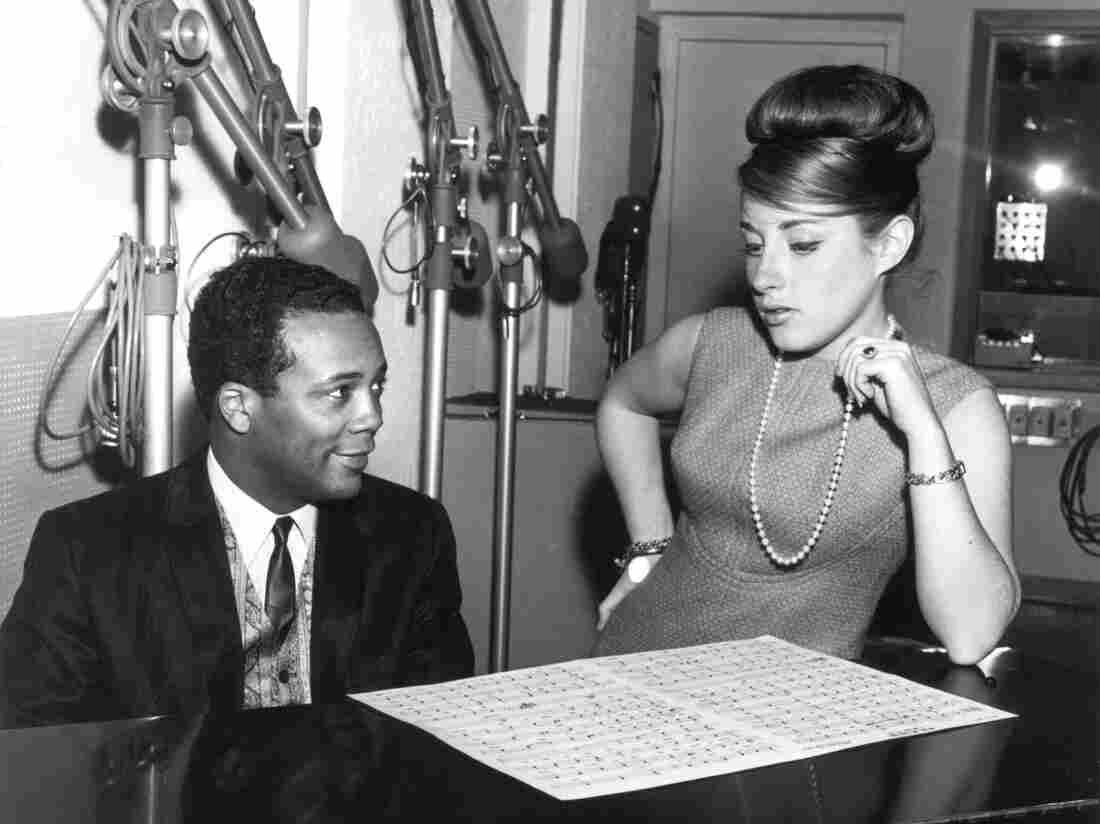 Lesley Gore and producer Quincy Jones at work in the studio. The two collaborated on "You Don't Own Me" and a handful of other 1960s hits. Donaldson Collection/Getty Images hide caption 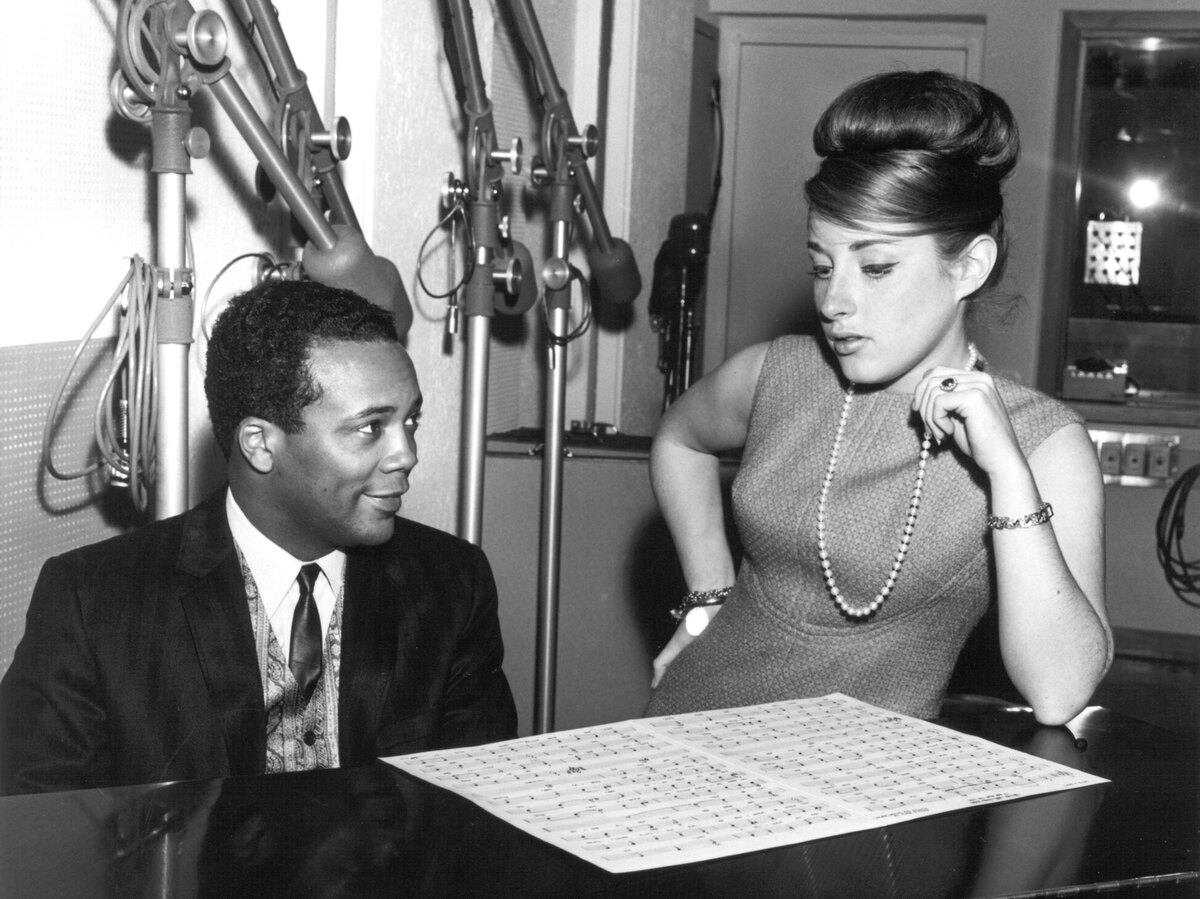 Lesley Gore and producer Quincy Jones at work in the studio. The two collaborated on "You Don't Own Me" and a handful of other 1960s hits.

There's a certain kind of song you just want to crank up after a bad breakup or a rough day at work. In 1963, a young singer renowned for a hit about getting ditched at a party unleashed just such an anthem.

Lesley Gore's coolly mutinous "You Don't Own Me" is richly scored, building from a minor-key dirge in the verses to a spirited chorus. The 1963 hit reframed the 17-year-old Gore as a confident chanteuse, rather than the pert pop princess then best-known for such bubblegum hits as "It's My Party" and "Judy's Turn To Cry." Her earlier songs had mostly concerned boys — getting dumped by boys, getting approval from boys, bragging about the boys who liked her.

In an interview on WHYY's Fresh Air in 1991, Gore recalled when "You Don't Own Me" first came to her attention. "At the time, I know I chose it because I know I liked the strength in the lyric," she told host Terry Gross. "But, for me, it was not a song about being a woman. It was about being a person, and what was involved with that. Of course, it got picked up as an anthem for women, which makes me very proud."

Many have taken up the song as a symbol of women's empowerment — like when the female cast of Saturday Night Live sang "You Don't Own Me" with actress Jessica Chastain the night of the 2018 Women's March — but this fiercely feminist anthem was written by two men. David White died earlier this year, but John Madara, now 82 years old, says the two songwriters were disgusted by how much music written for female singers in the early 1960s centered on mooning over guys and decided to try something: "Let's write a song about a woman telling a guy off."

Madara says the song's sensibility was also shaped by his upbringing in a multiracial Philadelphia neighborhood and his participation in the civil rights movement. "I saw how black people got treated," he says. "It was horrible, horrible, horrible. My friends and I got locked up in Philadelphia and Mississippi, and they treated us like gangsters. And my black friends got hit more than I got hit. [The police] had billy clubs and hit you across the legs, but the black guys got hit across the body. Those are things you don't forget."

"All of these things still exist," adds UCLA musicology professor Shana Redmond, speaking about violence against disenfranchised people who stand up to oppression. "And that is literally the haunting of 'You Don't Own Me' — all of the ways in which systems of patriarchy continue to reveal themselves in our everyday lives."

Redmond says the minor key of the verses underscores that sense of risk, but that there is power in the phrasing: The song is made up entirely of declarative sentences. "There are no ellipses, no question marks whatsoever," she says. "She is not mixing messages. You understand what she is saying from Line 1."

The song's unvarnished feminism appealed to a young Australian singer who goes by the single name Grace. Her hip-hop-inflected version, featuring the rapper G-Eazy, became a hit in 2015, the same year Gore died.

"She was 17 when she recorded the song, which is coincidentally the same age I was when I recorded it," Grace says. And there's another parallel: Both versions were produced by Quincy Jones, a mentor to Gore in the '60s who would go on to become one of the biggest names in music. Grace says Jones approached her to rerecord the song after hearing her demo tapes — and that before she did, he educated her on its roots in racial politics and feminism.

"It's just, 'I am who I am,' " Grace says. "Everything about it was just mesmerizing. The original is unbeatable."

Gore's death at 68 from lung cancer came before "You Don't Own Me" was picked up as an anthem in the #MeToo movement. Still, the song took on a new set of meanings for her over the years: She used it in a 2012 public service announcement urging women to vote, saying, "It's hard for me to believe, but we're still fighting for the same things we were then." And by the time she rerecorded it for her final album, 2005's Ever Since, she had come out as a lesbian. Gore and her partner, Lois Sasson, were together for more than 30 years.

"If you listen to that version, it's sort of heavy with wisdom and life experience," says Trevor Tolliver, author of the biography You Don't Own Me: The Life and Times of Lesley Gore. "The original is that of this sort of assertive young lady. Her remake in 2005 sounds more self-assured and mature, that of a woman who's already staked her claim and doesn't need to please anyone but herself."

An anthem is a song that gives language — loudly — to feelings we might not otherwise be able to express. Madara says the message of "You Don't Own Me" is ultimately about empathy.

"Listen to what people have to say; be kind and loving to the people you come into contact with," he says. "I think 'You Don't Own Me' says that. It says, 'Treat people fairly.' "

"You Don't Own Me" might not be not the definitive anthem of a big social movement. But it has underscored the can't-keep-me-down spirit of dozens of television shows and movies (like The First Wives Club in 1996). The song is a swaggering clapback against powerlessness, whether in a relationship, at a job or as a citizen.