Accessibility links
A Father And Daughter Who Drowned At The Border Put Attention On Immigration Óscar Alberto Martinez Ramirez was trying to bring his 23-month-old daughter, Angie Valeria, to safety and a new life in the U.S. 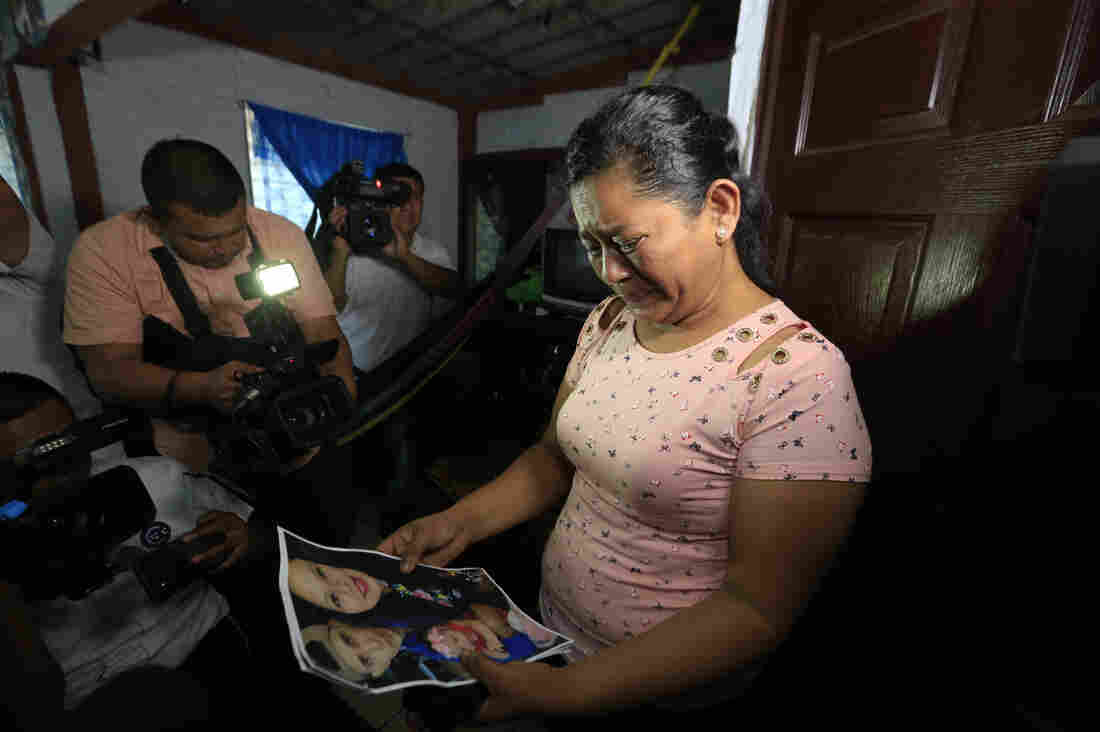 Rosa Ramírez cries as she looks at photos of her son Óscar Alberto Martínez Ramírez, 25, and granddaughter Valeria, nearly 2, while speaking to journalists at her home in San Martín, El Salvador, on Tuesday. The drowned bodies of her son and granddaughter were found Monday morning on the banks of the Rio Grande. Antonio Valladares/AP hide caption 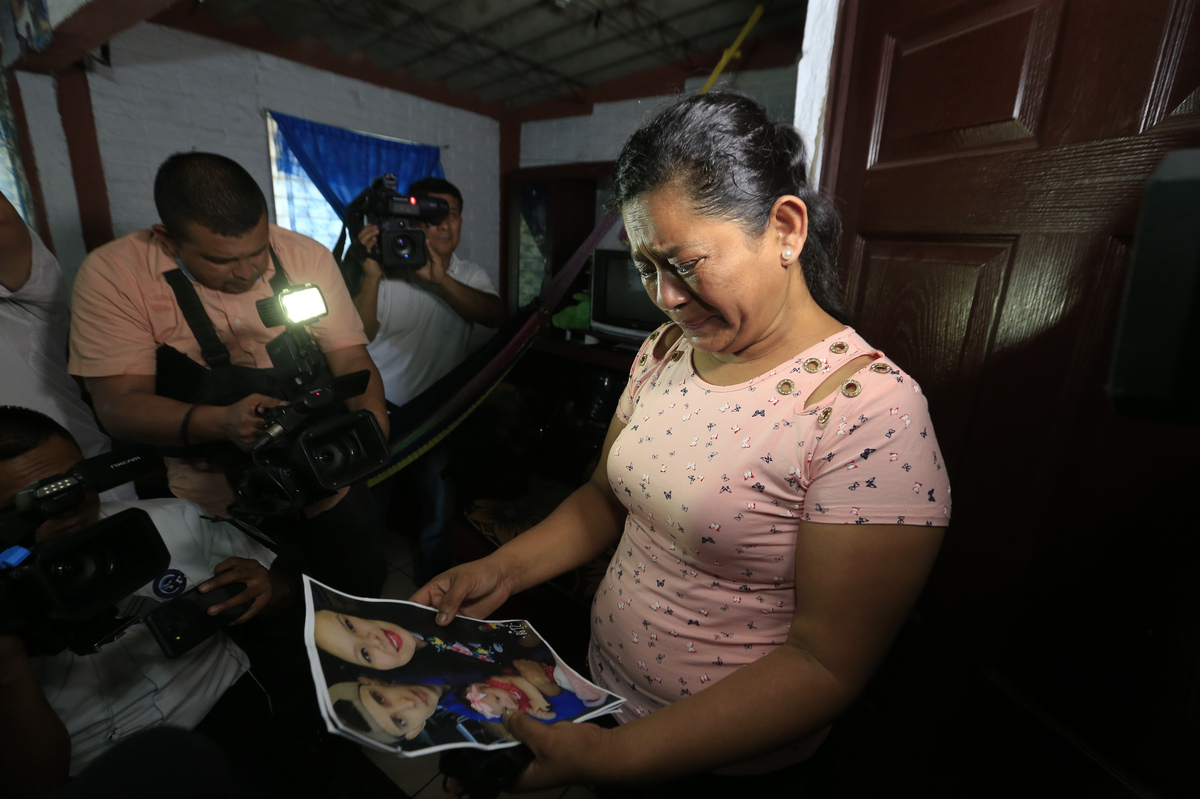 Rosa Ramírez cries as she looks at photos of her son Óscar Alberto Martínez Ramírez, 25, and granddaughter Valeria, nearly 2, while speaking to journalists at her home in San Martín, El Salvador, on Tuesday. The drowned bodies of her son and granddaughter were found Monday morning on the banks of the Rio Grande.

Editor's note: This story contains images that some readers may find disturbing.

The desperate and tragic plight of a father and daughter who drowned while trying to cross the border from Mexico into the U.S. has become a new flashpoint in the border crisis, after a photographer captured a haunting image that shows the pair lying facedown, washed onto the banks of the Rio Grande.

Óscar Alberto Martínez Ramírez, 25, died as he tried to bring his 23-month-old daughter, Angie Valeria, to safety and a new life in the U.S. Ramírez's wife, Tania Vanessa Ávalos, says she watched from the shore as her husband and daughter were pulled away by a strong river current near the border crossing between Matamoros, Mexico, and Brownsville, Texas.

The small family was fleeing poverty in El Salvador and had secured a humanitarian visa in Mexico — but after spending two months in a migrant camp waiting to apply for asylum in the U.S., Martínez decided that they should try to cross the border on Sunday. Those details all come from the Mexican newspaper La Jornada, whose journalist, Julia Le Duc, was at the riverbank as Ávalos spoke to police and emergency workers.

Le Duc also photographed the bodies of Ramírez and his daughter, which were found after Ávalos alerted authorities in Mexico. Le Duc's images show the pair lying along the riverbank, with their feet in the water and their heads on the reeds of dry land. The toddler is tucked into her dad's T-shirt — an apparent attempt to keep her close as the current took them away. Her arm is flung around his neck. 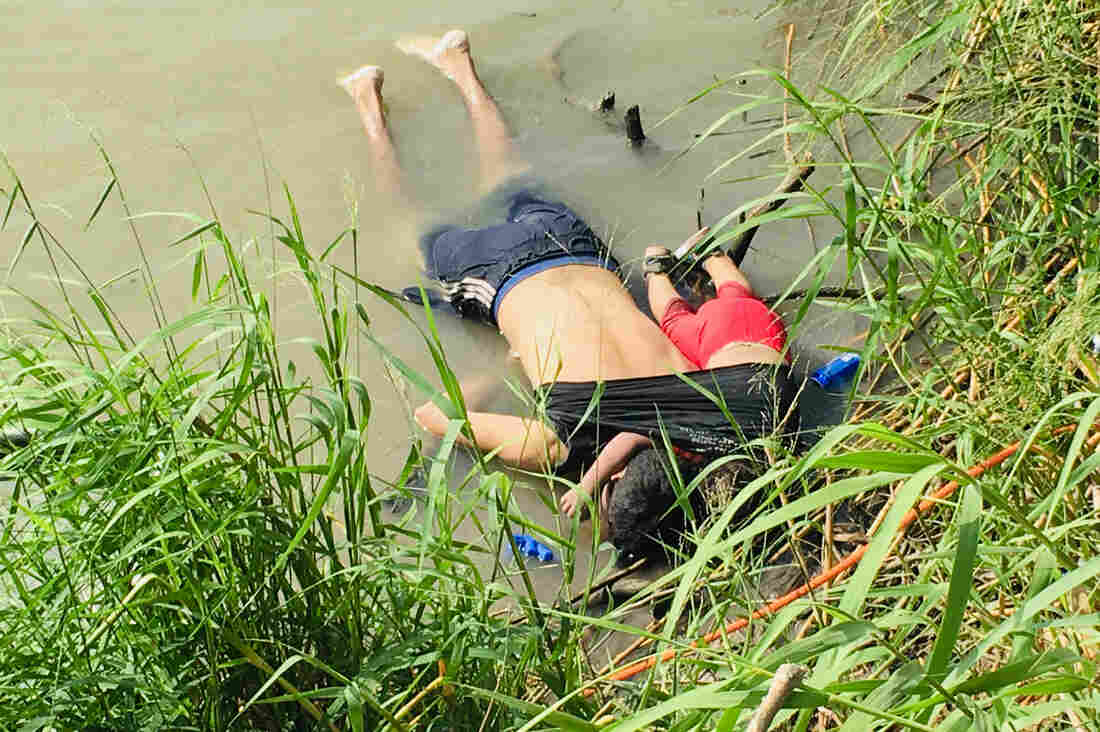 The bodies of Óscar Alberto Martínez Ramírez and his nearly 2-year-old daughter, Valeria, lie on the bank of the Rio Grande in Matamoros, Mexico, where they were found Monday morning. They drowned while trying to cross the river to Brownsville, Texas. This photograph was first published in the Mexican newspaper La Jornada. Julia Le Duc/AP hide caption

The shocking and unsettling image has drawn comparisons to other powerful photos, of the death of Aylan Kurdi, the 3-year-old Syrian boy who drowned in 2015 as his family tried to reach sanctuary in Greece, and of Omran Daqneesh, who was 5 when he was wounded in an airstrike in Aleppo.

In the same way those images focused the world's attention on the humanitarian crisis in Syria and Turkey, the intense image from the Rio Grande comes as a stark reminder of the human toll of the immigration crisis. As in those earlier cases, it also shows the devastating effect strife and desperation often inflict on children and families.

On the same day Óscar Alberto and Valeria died, U.S. Border Patrol agents found four bodies along the Rio Grande in Texas' Rio Grande Valley, about 55 miles west of Brownsville. In that case, three children — one toddler and two infants — died along with a 20-year-old woman.

In reports about the drowning in Matamoros, some of the details have varied. According to La Jornada, Ávalos said her husband had taken their daughter across the river and was returning to get his wife when he realized the little girl had not stayed on the bank — she was in the water. Valeria had apparently panicked when she saw her father go back across the river without her.

Ávalos said her husband was able to reach the little girl but wasn't able to make it back to the shore. Their bodies were found Monday morning, about 550 yards from where they tried to cross, La Jornada reported.

The New York Times, meanwhile, says the family had entered the river together and that Ávalos swam back to the Mexican side, where she watched the water sweep away her husband and daughter. The newspaper cited Ávalos' comments to government officials.

The family had attempted to cross at a relatively narrow section of the river. But as The Associated Press reports, local officials had recently warned that the river poses a perilous threat, especially because it has been coursing with water that was released from dams to supply irrigation projects.

"We are united to pain by this irreparable loss," the Salvadoran president's office said of the tragedy, after Ramirez's cousin asked for the government's help in bringing the bodies back home.

Salvadoran President Nayib Bukele granted the request, telling Foreign Affairs Minister Alexandra Hill to make arrangements and give the family financial support. Both the president and Hill also urged Salvadorans not to try to cross the U.S. border without going through legal channels.

In the most recent fiscal year, there were 283 deaths across the U.S. southern border — with nearly 100 of those deaths reported in the Rio Grande Valley, according to the Border Patrol.

Migrants who want to enter the U.S. at legal border crossings often face long waits due to the U.S. Customs and Border Protection policy of "metering," which is meant to manage the flow of migrants by blocking entry if no space is available in CBP's processing facilities.

The U.S. agency says the practice of metering targets health and safety hazards. But in a report on the policy that came out last fall, Homeland Security's inspector general said, "While the stated intentions behind metering may be reasonable, the practice may have unintended consequences."

Citing interviews with Border Patrol officers and supervisors, the inspector general's office said it found "evidence that limiting the volume of asylum-seekers entering at ports of entry leads some aliens who would otherwise seek legal entry into the United States to cross the border illegally."

The Hispanic Caucus of the House of Representatives blamed the Trump administration for the deaths.

"They were driven to cross the river out of desperation — only after they tried to legally seek asylum," the caucus said in a tweet. "They should be safe in the U.S. Instead, they are dead because of Trump's cruel policies."

On Wednesday, Trump blamed current U.S. immigration laws for the deaths. When he was asked how he felt about the photo of the dead father and daughter, the president replied, "I hate it."

"I know it could stop immediately if the Democrats change the law. They have to change the laws," Trump said, adding, "and then that father, who probably was this wonderful guy, with his daughter — things like that wouldn't happen."

Trump predicted that if asylum rules were changed and a wall were built, migrants wouldn't try to cross the river. Speaking to reporters before he boarded Marine One at the White House, he added that conditions at the border prove he was right to say America has an immigration crisis.

"We have a crisis at the border," Trump said.

Under President Trump's "zero tolerance" policy for illegal immigration, the Department of Homeland Security has been criticized for its treatment of families and children, including the now-revised policy of separating minors from their parents.

Over the weekend, the bleak and unsanitary conditions under which more than 350 children were housed in a Border Patrol station in southwest Texas sparked an outcry, prompting the government to move most of those children to other facilities.