Accessibility links
Trump Campaign Buys Ad That All YouTube Visitors Will See As Democrats Debate President Trump's campaign bought the masthead ad on YouTube, an expensive ad buy that could reach many more voters than the debate. 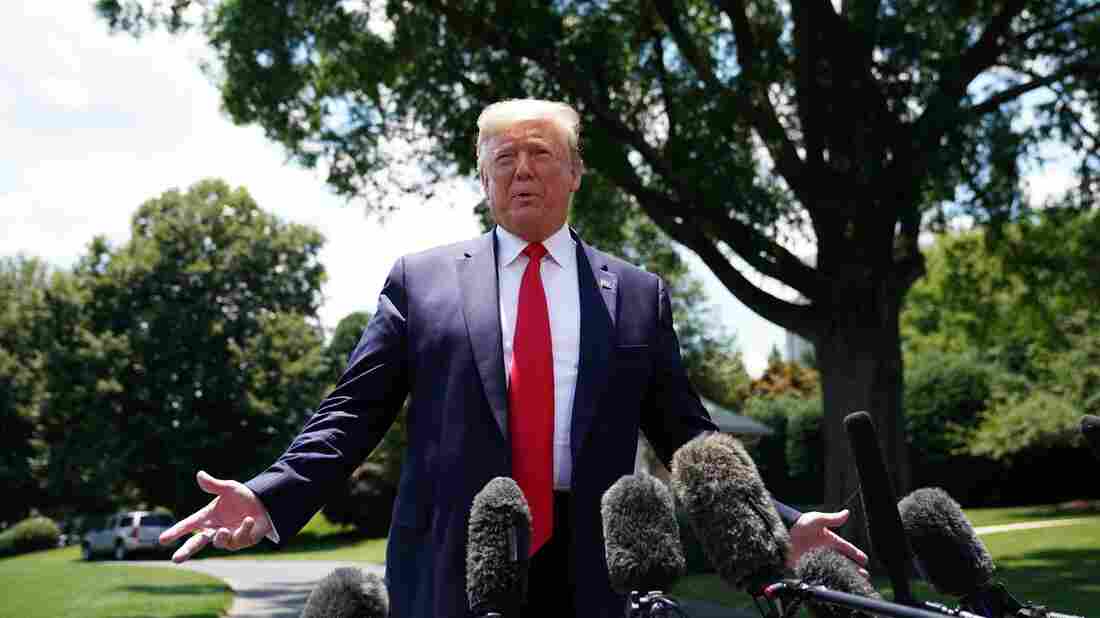 President Trump speaks to the press as he departs the White House on Wednesday en route to Osaka, Japan, for the G20 Summit. His campaign is running major ads on YouTube during the Democratic primary debate Wednesday night. Mandel Ngan/AFP/Getty Images hide caption 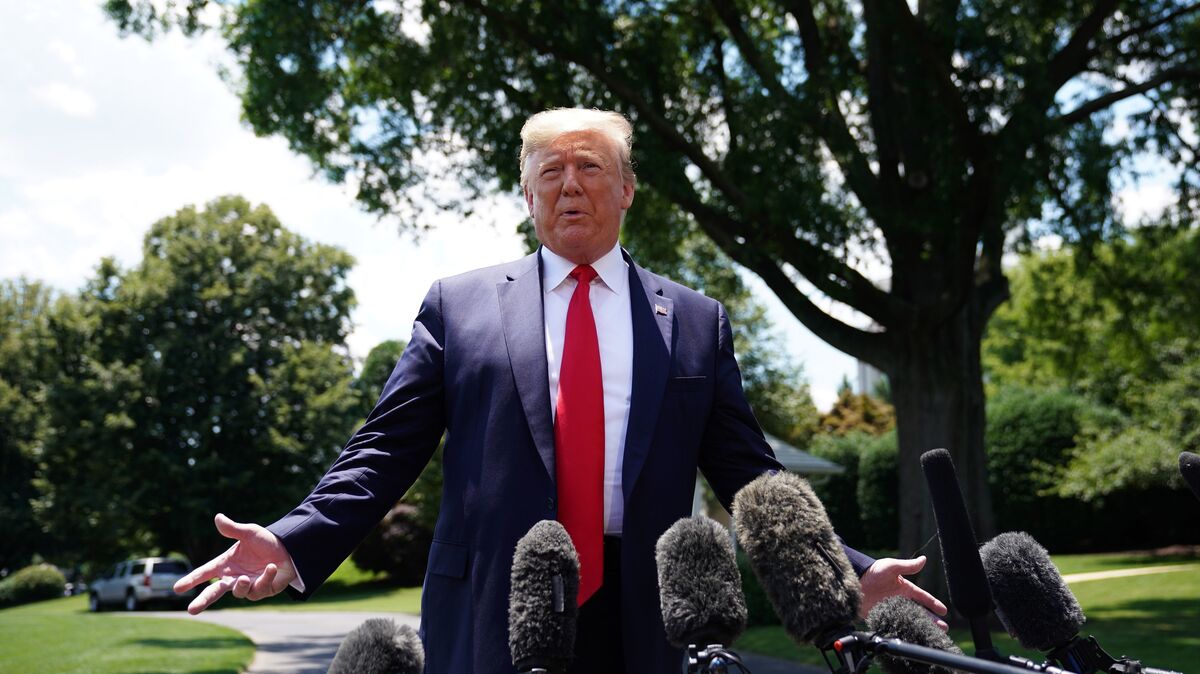 President Trump speaks to the press as he departs the White House on Wednesday en route to Osaka, Japan, for the G20 Summit. His campaign is running major ads on YouTube during the Democratic primary debate Wednesday night.

If you pull up YouTube for squirrels on water skis, the latest Taylor Swift music video or the Democratic debate Wednesday night, you'll notice something prominently displayed at the top of the page — a banner ad paid for by the Trump campaign.

President Trump's campaign is counterprogramming the debate and making a point — he is the president, running for reelection while Democrats are running against each other.

"More people will see this than will watch the debate today," said Daniel Hoffmann, director at Bully Pulpit Interactive, a digital agency associated with Democrats that tracks social ad spending by political campaigns. "In our experience, we've seen the placement reach as many as 80 million Americans in a single day."

The campaign purchased what's known as the masthead on YouTube, the space at the top of the site's main page. It's an ad buy that can cost as much as $1 million for 24 hours of reaching every person who visits the free version of the video-sharing site, which is owned by Google.

The space is one of the most high-profile places to advertise online and is more commonly purchased for big movie premieres or brand launches than for politics. 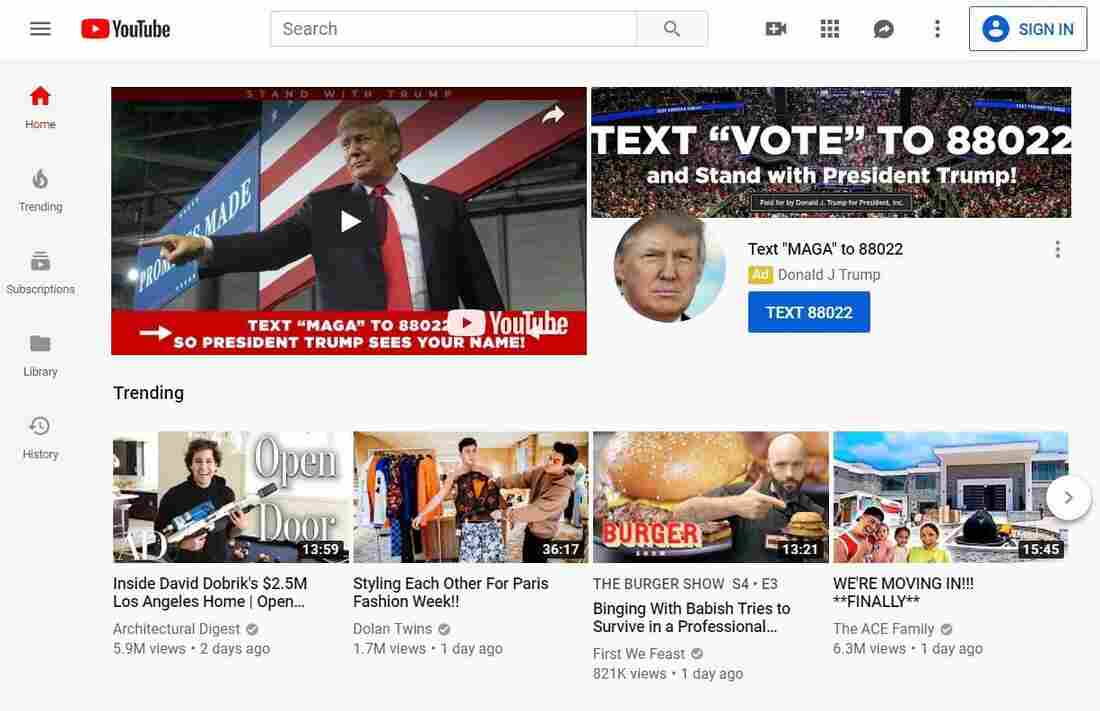 Of course, this is a day when much of the political world's attention will be on the first Democratic presidential debate in Miami, and people will inevitably turn to YouTube to find clips from the debate or to stream it live.

When they do that, they'll see the Trump campaign banner ad at the top of the screen.

This may be more about sending a message and getting attention than persuading voters or recruiting new campaign donors. The power of digital advertising is targeting, getting specific messages to specific kinds of people. But with this buy, Trump's campaign is reaching a general audience.

This is "honestly probably better for YouTube's ad sales department than Trump's campaign," said Jessica Alter with Tech For Campaigns, a firm that does digital strategy for Democrats. "These buys carry premium prices and are implicitly untargeted and are much more like old-school TV-buying."

The real value, for this type of ad, Alter argues, is "with the earned media value of the 'splash,' less so the actual impressions."

The Trump campaign declined to comment for this story. But in an interview earlier this year with Sinclair Broadcasting, Trump campaign manager Brad Parscale said he anticipated the reelection effort would cost $1 billion and as much as half of that would go toward digital spending.

This isn't the first time the Trump campaign has purchased this prime advertising real estate on YouTube. It also did it during the government shutdown in January, using the space for messaging about border security.

The Trump ads on the YouTube masthead are rotating through various pitches — some encourage people to sign up to receive text messages from the campaign while others talk about immigration.

In fact, according to Bully Pulpit's analysis, the Trump campaign has spent almost $550,000 on Facebook ads related to immigration since April 1. That doesn't include Wednesday's YouTube buy.

"It's an issue they've clearly decided to go all in on," Hoffmann said.

Bully Pulpit finds that Trump's team has now invested $11.1 million on Facebook and Google/YouTube ads just since the first of the year.

"They are at their highest spending level of the quarter right now," Hoffmann said.

All the Democratic candidates combined have spent $18.7 million so far this year.