Accessibility links
Tasers Are Less Effective Than Believed, Analysis Shows When APM Reports analyzed databases from some of the largest police departments in the country, it found that officers reported a much lower range of effectiveness rates than the company claims.

Listen · 5:22 5:22
Despite Widespread Use, Police Rate Tasers As Less Effective Than Believed 5:22 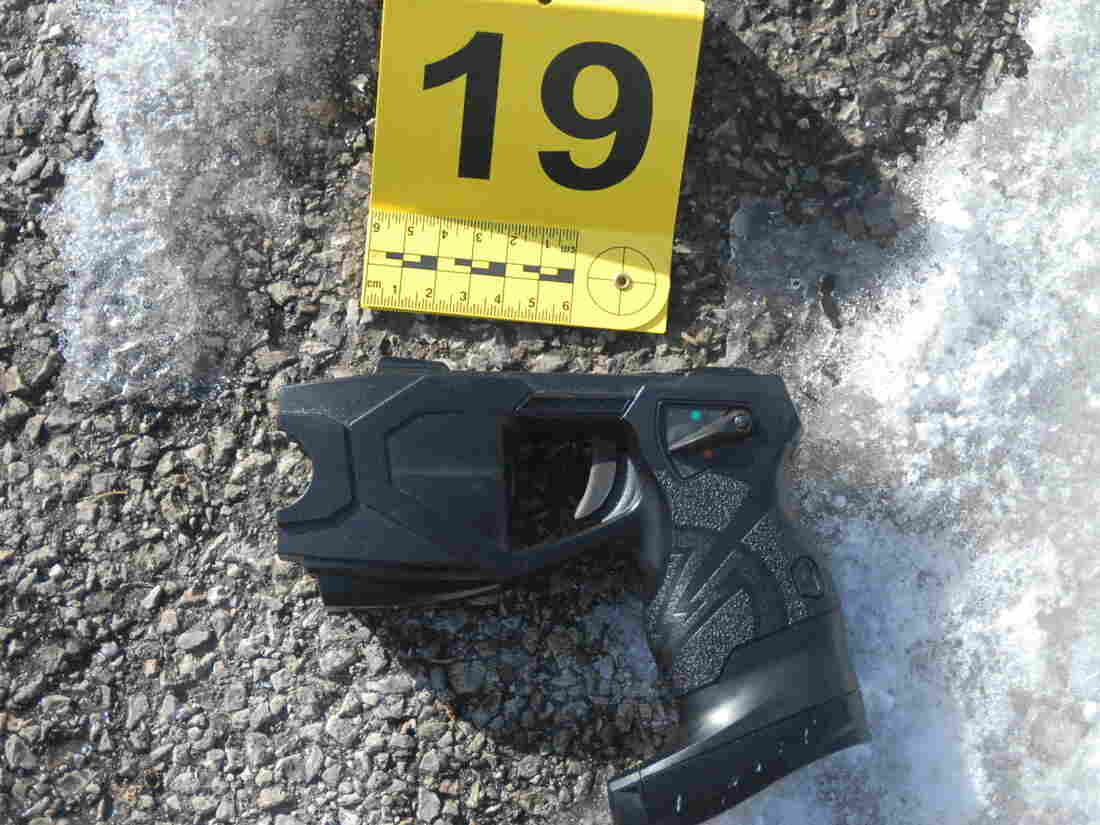 A Taser X26P lies next to a crime scene marker after a police officer in Zion, Ill., tried unsuccessfully to use it on a suspect named Charles Hollstein in 2016. Hollstein struggled with officers after two Tasers failed to subdue him. An officer shot and killed him during the struggle. Courtesy Lake County Major Crimes Task Force hide caption 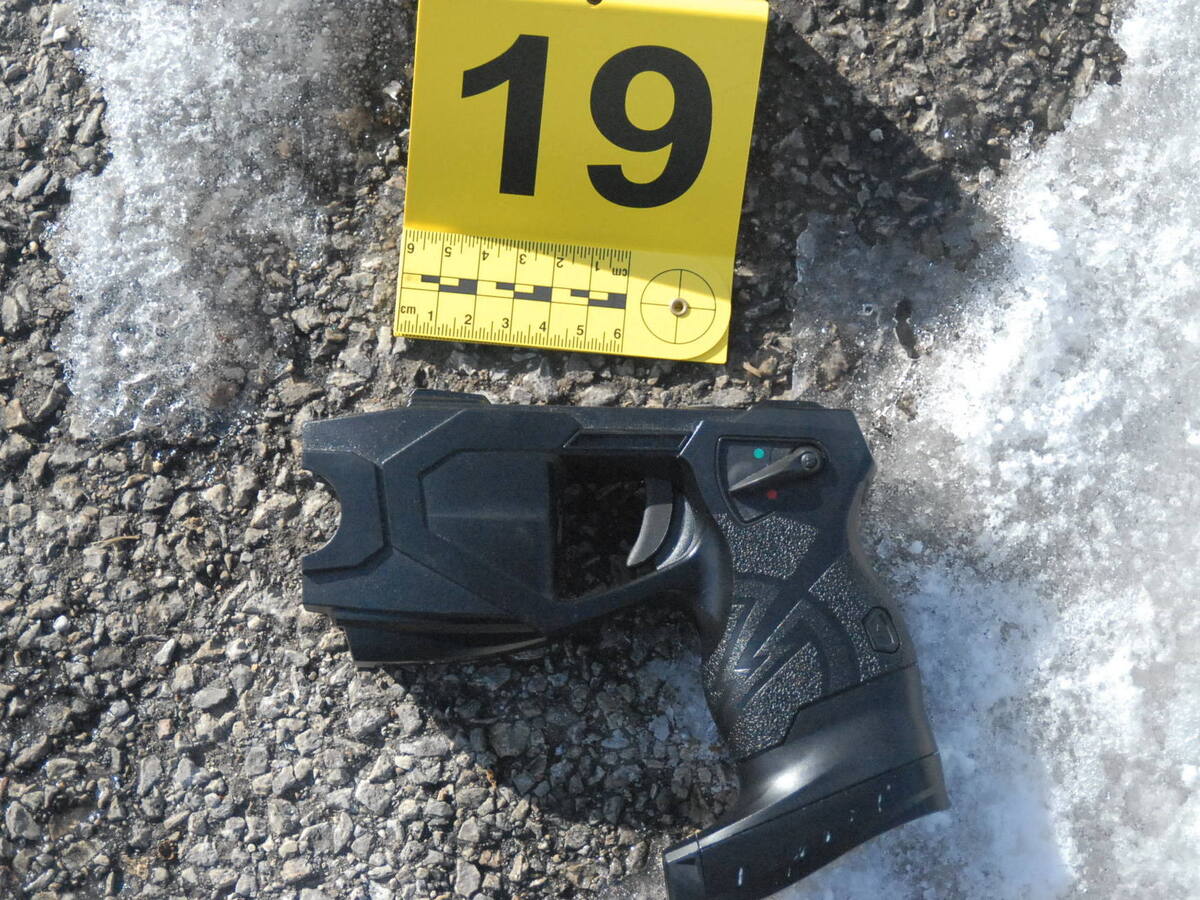 A Taser X26P lies next to a crime scene marker after a police officer in Zion, Ill., tried unsuccessfully to use it on a suspect named Charles Hollstein in 2016. Hollstein struggled with officers after two Tasers failed to subdue him. An officer shot and killed him during the struggle.

Tasers are carried by some 400,000 American patrol officers, according to Axon, the company with a monopoly on producing them in the U.S. Though the electrical weapons are widely used, police in major cities rate them as less effective, APM Reports found in its yearlong investigation. In more than 250 cases over three years, a Taser failed to subdue someone who was then shot and killed by police.

1. Police rate Tasers as less effective than their manufacturer has claimed

Over the years, Axon has made some eye-popping claims about the effectiveness of its weapons.

The company claimed that in demonstrations and testing, Taser effectiveness reached 99% and even 100%.

In more recent years, Axon hasn't used such precise effectiveness rates in its marketing. But as recently as 2015, CEO Rick Smith said Tasers were "80 to 95% effective in the field."

But when APM Reports analyzed databases from some of the largest police departments in the country, it found that officers reported a much lower range of effectiveness rates.

Every police department has its own way of tracking and defining effectiveness. But no matter what methodology they used, none of the departments had the kind of success rates Axon has claimed.

Axon says the varying methodologies make these databases "unreliable." It also says the use-of-force data do not capture the full utility of Tasers, because most cities don't track the cases where an officer gains compliance by merely threatening to use the weapon. However, two of the cities — Fort Worth, Texas, and Seattle — do track Taser "displays." Including these cases did not substantially change the effectiveness rate.

Tasers are "the most studied less-lethal tool on an officer's belt," Axon spokesman Steve Tuttle said in a written statement. "These studies, along with nearly 4 million field deployments over 25 years, establish they are the most safe and effective less-lethal use of force tool available to law enforcement."

Police departments in New York, Los Angeles and Houston each switched from older models to newer ones in recent years. Those newer models, called the X2 and the X26P, were designed to be safer for suspects, because they put out less electrical charge than the older X26.

While each city tracks effectiveness differently and had a different baseline rate, the decline was similar — 6 to 7 percentage points. Given the size of the datasets, each encompassing 4,000-5,000 records, the drop in effectiveness was statistically significant.

APM Reports also conducted a more sophisticated analysis of the data, which allowed us to control for other factors such as the rank of the officer, how the Taser was used and how many times it was used. Even controlling for these other factors, the newer Taser models had lower odds of being rated effective by the officers who used them. More on the methodology here.

Axon says its testing shows the newer Tasers work just as well as their predecessors, and it questions the reliability of the police departments' data.

3. When Tasers fail to subdue suspects, police sometimes end up shooting them

APM Reports found more than 250 cases across the country where police shot and killed people after a Taser proved ineffective — over just a three-year period. These incidents accounted for about 1 in 12 fatal shootings by U.S. police between 2015 and 2017.

APM Reports found the cases by first reviewing news accounts of each fatal police shooting documented by The Washington Post during those years. For each fatal shooting case where a Taser was reportedly used, we filed public records requests to determine how the incident unfolded, how the Taser was used and what happened after it proved ineffective.

While these records were not always available owing to pending investigations and varying public access laws, we found that in more than 100 of the cases, people became more aggressive after police fired Tasers, suggesting the devices may have made a bad situation worse.

There are numerous reasons a Taser can fail to subdue someone. One or both of the electrified darts could miss, be pulled out or get snagged in clothing. The devices also have a less dramatic effect on the human body when fired at close range.

Axon says the Tasers aren't necessarily to blame in these incidents, and the company notes that officer training could be a factor.

4. Cops often use Tasers in the ranges where they are not reliably effective

Tasers fire a pair of barbed darts attached to electrified wires. The darts spread apart as they fly. To reliably incapacitate someone, they need to hit at least 12 inches apart. When the darts strike closer together than that, they still hurt, but the electricity doesn't flow through enough muscle to reliably stop an attacker in his or her tracks.

Most of Axon's Taser models reached that 12-inch spread when the officer was at least 7 feet from the target. 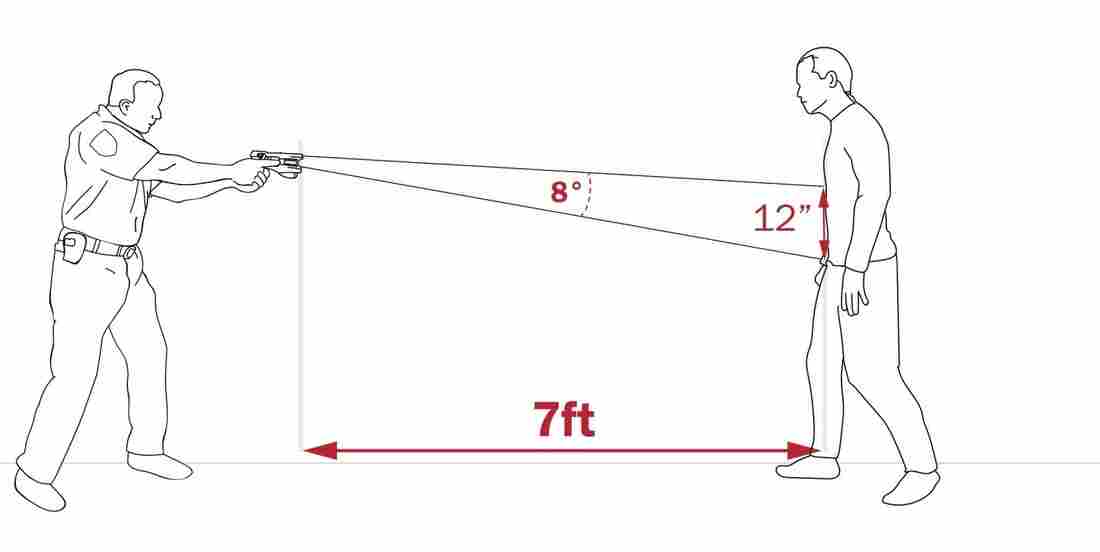 And some newer models (the X3 and X2) didn't reach the optimal spread until officers were at least 9 feet away.

But data from police departments in New York and Fort Worth show that police use Tasers at closer ranges about three-fourths of the time.

5. Axon's new Taser 7 tries to address the problem by adopting a design feature from a former competitor's weapons that dates to the 1970s

In October, CEO Smith told a group of police officers that the company was working hard to make Tasers more effective.

"We know as our technology has gotten better you've come to rely on it more and more, and it's really painful for you and for us when it doesn't work, when it doesn't get the job done," he said. "And that's what keeps us up at night."

Smith unveiled the Taser 7, which he promised would be "stronger, faster and smarter than any that has come before it."

The Taser 7 has redesigned darts and electrical pulses, but perhaps the most dramatic change has to do with the range of the weapon. Its darts spread apart more quickly than Axon's earlier models, so they reach the 12-inch separation after flying just 4 feet, rather than the 7 or 9 feet for Axon's earlier models. 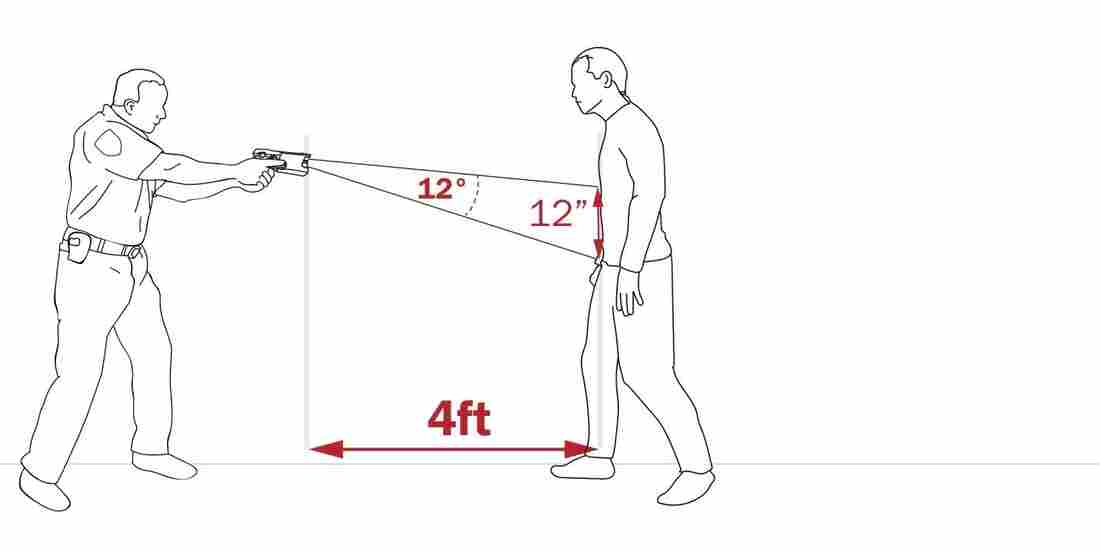 This is not a new idea. In fact, it dates to the original Tasers developed in the 1970s. Weapons with this design were produced for decades afterward by a now-defunct company called Tasertron.

A study published in 2000 by a Canadian police sergeant noted that because Tasertron's darts spread apart faster than Axon's, its weapons would tend to have a more dramatic effect in the ranges "where most Taser applications take place."

Read the full investigation, including the methodology, on the APM Reports website.