Accessibility links
Review: 'The Plagiarists' Feels Inauthentic Shot on vintage, lo-fi video cameras, this talky, didactic film finds a bickering couple beginning to question themselves once they start to question a tale told by an older black man. 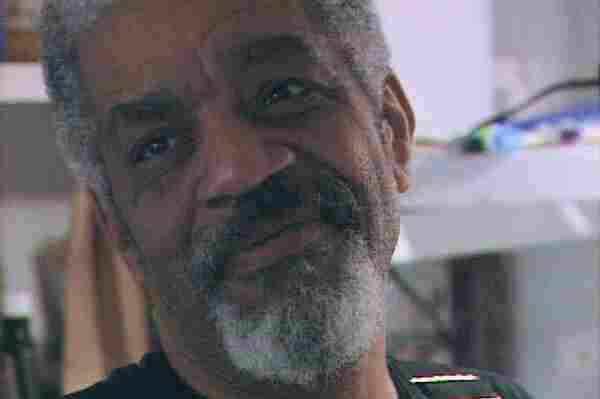 Not everything is what it seems in The Plagiarists, a lo-fi indie drama directed by Peter Parlow. Automatic Moving Co. hide caption 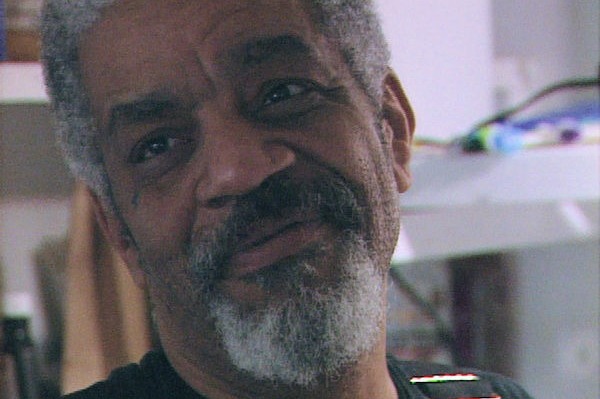 Not everything is what it seems in The Plagiarists, a lo-fi indie drama directed by Peter Parlow.

When we first meet Anna (Lucy Kaminsky) and Tyler (Eamon Monaghan), their car has broken down on a wintry day in a rural area, and they're bickering about what to do. The thirty-something couple at the center of The Plagiarists is always squabbling about something, which is part of the joke. This is a cool, ironic movie about people are perpetually uptight and earnest.

The story's fundamental crisis arrives in the second of two chapters, but is sparked by something that happens in the first. Anna is a copy editor and aspiring novelist; Tyler a freelance cameraman and would-be filmmaker. They're broke, so they're relieved when Clip, an older African American man, offers to help. Played by Parliament-Funkadelic vocalist-keyboardist Michael "Clip" Payne, the duo's benefactor provides a place to stay the night and the phone number of a mechanic who works cheap.

Duplass Brothers On Working Together And Growing Apart: 'We Are Ex-Soulmates'

Clip's house is modest, but full of wonders and mysteries. A young blond boy is there, playing videogames and skipping the dinner Anna makes; his presence is never explained. Of more interest to Tyler is a closet full of obsolete video gear, including a 1988-vintage camera. (It's just like the one with which cinematographer, editor, and co-writer James N. Kienitz Wilkins shot this low-def, square-format flick.)

While Tyler tinkers, Clip engrosses Anna with tales of his childhood in a remote frozen land. (Not Norway, which is mentioned in passing several times, but Michigan.) His reminiscence culminates in a long, poetic monologue that awes the fledgling author.

About six months later, Anna and Tyler are headed back to the same area to visit their friend Allison (Emily Davis), who's offscreen in the first episode. While Tyler drives, the two quarrel, Anna reads a trendy book, and the radio plays an NPR film review. Then Anna comes to a passage that's very familiar: It's the supposed boyhood memory Clip delivered the night he hosted her and Tyler.

Anna is agitated by the discovery, although Tyler and, later, Allison are less concerned. For Anna, the revelation that Clip's story was not his own seems to throw everything and everyone into doubt. The movie is titled The Plagiarists, after all, not The Plagiarist.

Who's faking what? Well, director Peter Parlow and the screenwriters — Robin Schavoir is the other one — are simulating "mumblecore," that micro-budget indie-film genre characterized by small casts, limited locations, and dialogue that's talky, aimless, and seemingly improvised.

The Plagiarists might be classified as mumblecore, but Kaminsky, Tyler and Payne couldn't have riffed off each other for the simple reason that all three weren't filmed together. Payne's scenes were shot separately, which is why he never appears in the same shot as the other two.

In a sense, this is an essay film. The four principal characters discuss a range of issues, from sperm banks and sex trafficking to Danish filmmaker Lars von Trier's Dogme '95 manifesto and the relative value of cinema and literature. (The last subject is addressed mostly in an epilogue in which one actor speaks but none are glimpsed.) In its end credits, the film footnotes sources for the chatter, and reveals that the score is stock music obtained from a website.

While such Brechtian gambits are intriguing, they'd be more effective if the movie were actually fun to watch. But Anna and Tyler are too querulous to be good company — or, for that matter, a believable couple. And Anna's reaction to Clip's monologue is not plausible, since his rap sounds like what it is: recitation, not conversation. The Plagiarists ponders authenticity, yet its characters and conflicts feel synthetic.