Accessibility links
Trump 2020 Campaign Is Building A Volunteer Army To Turn Out Supporters In 2020 Operating jointly, the Trump campaign and Republican Party are leveraging Trump's rallies to gather information about voters and build a volunteer army. 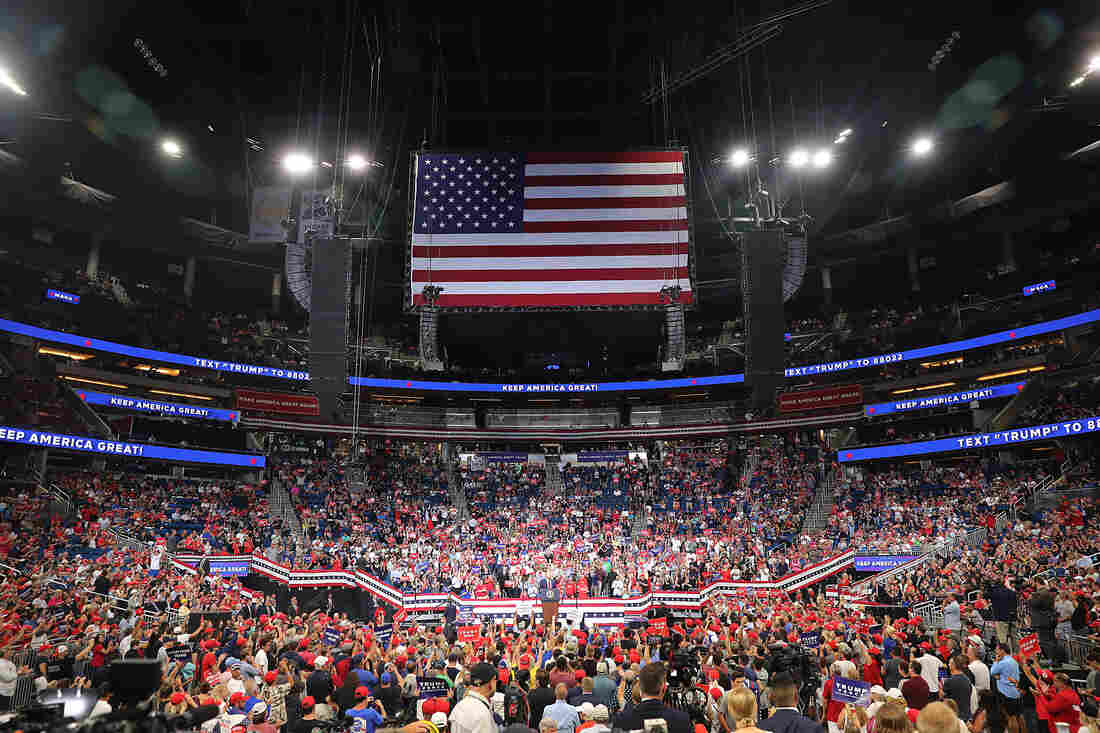 President Trump speaks last week at a rally in Orlando where he kicked off his campaign for a second term. Unlike his ramshackle campaign in 2016, his 2020 effort relies on a large volunteer organization and sophisticated voter targeting. Joe Raedle/Getty Images hide caption 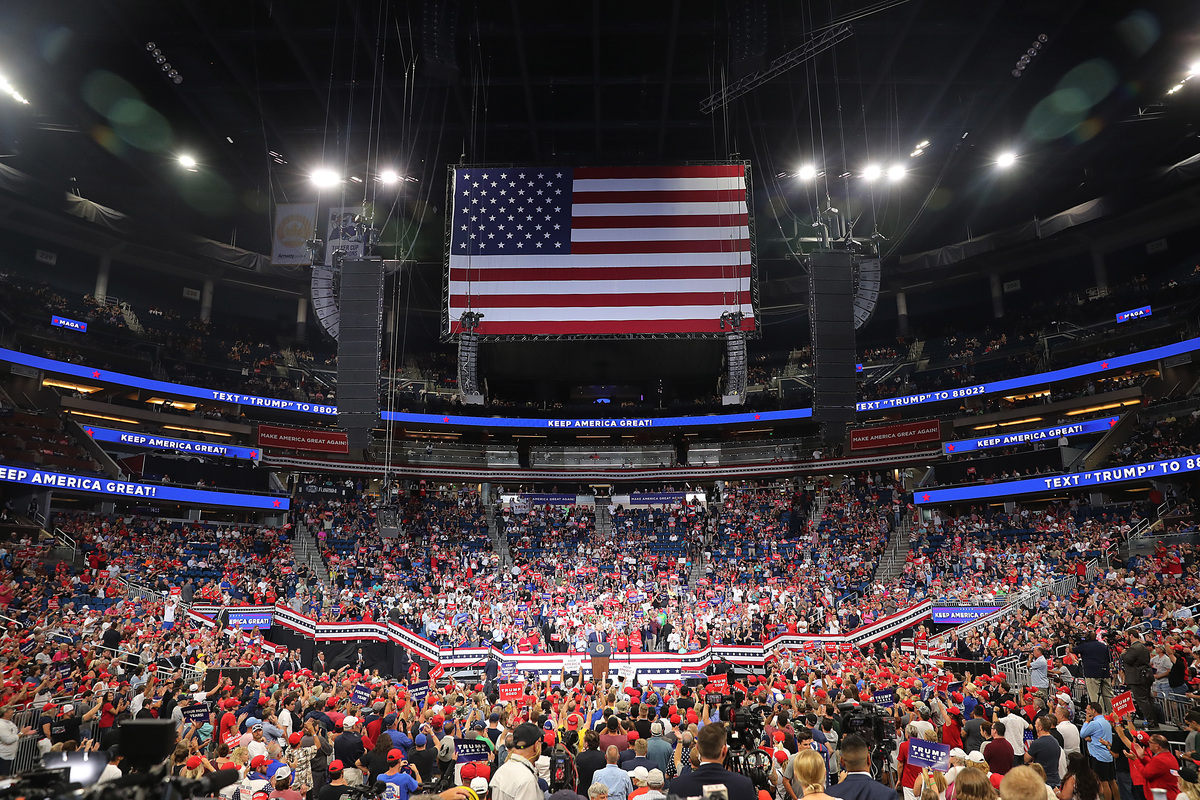 President Trump speaks last week at a rally in Orlando where he kicked off his campaign for a second term. Unlike his ramshackle campaign in 2016, his 2020 effort relies on a large volunteer organization and sophisticated voter targeting.

The Trump rally soundtrack still includes "Tiny Dancer" and "Memory," the theme from Cats. There are still chants of "lock her up" and "build that wall." But four years later, this isn't the same shoestring Trump campaign that stumbled its way to victory in 2016.

One indication of the difference came the night before President Trump's attention-grabbing rally in Orlando to kick of his re-election effort. Volunteers gathered at a Brazilian steakhouse in a nondescript strip mall a few miles away. In a banquet hall with sticky floors and ice-cold air conditioning, the volunteers responded to an hour-long PowerPoint presentation with enthusiastic hoots and hollers.

They were there to learn the process for registering voters and how to leverage their own social media accounts to spread the word about Trump's accomplishments.

"You guys are the key to victory on November 3rd, 2020. I mean that sincerely. I mean that with all of my heart," said campaign spokeswoman Kayleigh McEnany, who was a surprise special guest at the training. "We at the campaign can only do so much. You hold the keys to victory." 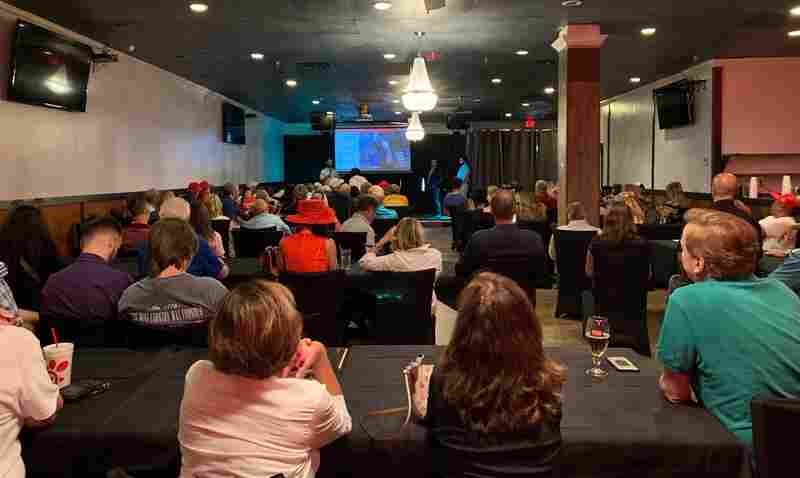 Volunteers gathered in a banquet room at a Brazilian steakhouse the night before the rally for a training session organized by the Trump campaign and RNC. It was one of more than 1,000 such sessions nationwide last week. Tamara Keith/NPR hide caption

The training session in Orlando was one of more than a thousand similar sessions all over the country put on that week by the Republican National Committee and the Trump campaign.

In 2016, the Trump campaign didn't gain access to the RNC's data and volunteer operations until after he secured the nomination midway through 2016. While it had been an uncomfortable marriage then, this time around, the Republican party and the Trump campaign are essentially one and the same and they are working to build an army of volunteers.

"He is the headliner. He's the blockbuster but there's something that I want to talk about that is just as important," Elliott Echols told the volunteers, referring to Trump.

Echols is the national field director for the RNC talked to the volunteers about the importance of organizing. It's a buzzword campaigns have been using for years to describe on-the-ground campaign work, building relationships with volunteers, learning about what drives supporters and registering people to vote.

The rallies, he explained, are a great way to find Trump supporters who may not be traditional Republican voters. 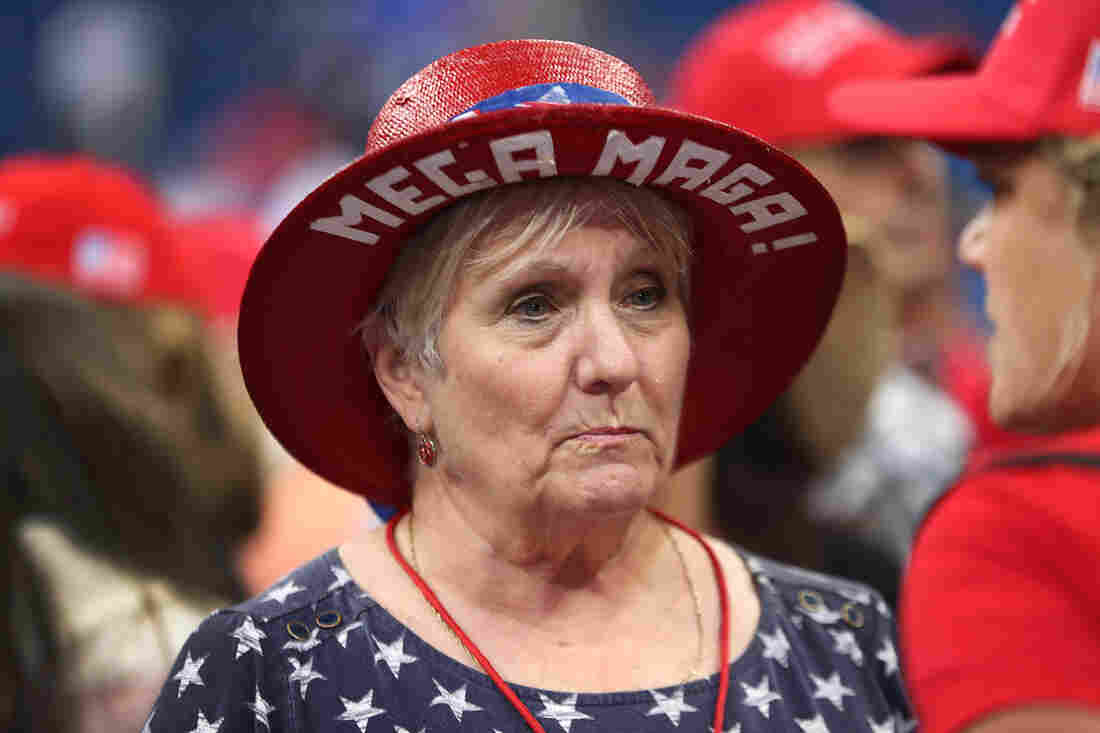 Georgia Williams waits for the arrival of Trump at his Orlando rally. Those who got tickets to the rally had to give the Trump campaign email addresses and phone numbers so that the campaign could stay in touch with them. Joe Raedle/Getty Images hide caption 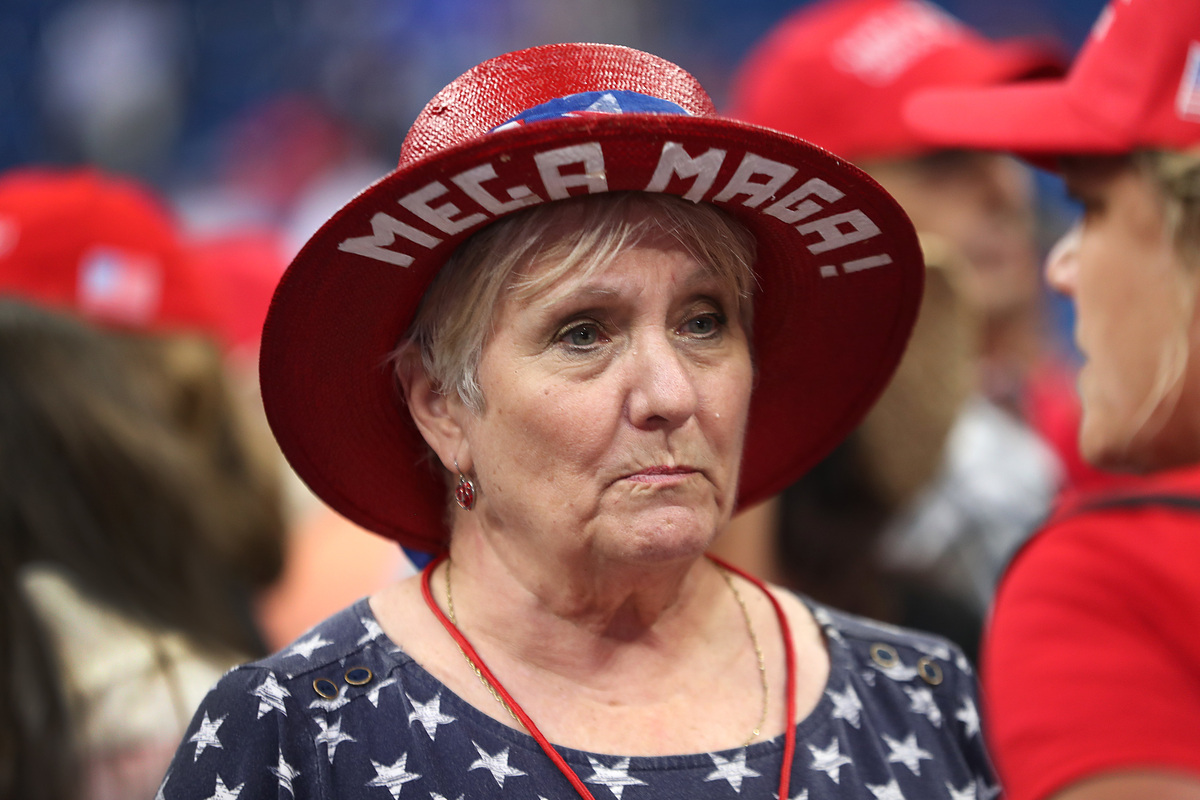 Georgia Williams waits for the arrival of Trump at his Orlando rally. Those who got tickets to the rally had to give the Trump campaign email addresses and phone numbers so that the campaign could stay in touch with them.

Each one of those more than 100,000 people who tried to get one of the 20,000 tickets for the rally had to give the campaign an email addresses and phone number, meaning the campaign and RNC now have up-to-date contact information for likely Trump voters.

"And then we can cross-reference that information with our data and voter rolls to see who these individuals are," said Rick Gorka, a spokesman for the RNC. "So now, you're in our system."

The rallies, he explains, are a focal point, "a jolt of energy, enthusiasm that you just can't recreate." The next day, volunteers start knocking on doors, making phone calls, making sure the people they contact are registered to vote, interested in volunteering or attending a meetup event and generally trying to pull all those people into the fold.

"Our data is only so good as the people who use it to knock on the doors," said McEnany.

As part of the training, the volunteers were given a peek at how the campaign's organizing and data-gathering fit into the bigger picture. There were slides about Democratic voter registration efforts in past years and the edge it gave them in close races. And there were hints at how the information they would be gathering would help Trump's campaign.

Volunteer Adele Amico's back hurt from the four and a half hour drive she made to get there to the training. But by the time the PowerPoint presentation was over, she was energized and ready to brave the Florida heat and humidity the next day.

"They're realizing that you have a captive audience of thousands of people and they're standing there, let's capture the information," Amico said. "So that is very cool."

She snapped a photo with McEnany, then headed out to find some Ibuprofin.

The next day she was one of approximately 60 volunteers in neon green shirts who fanned out into the crowd of people waiting to get into Trump's rally. 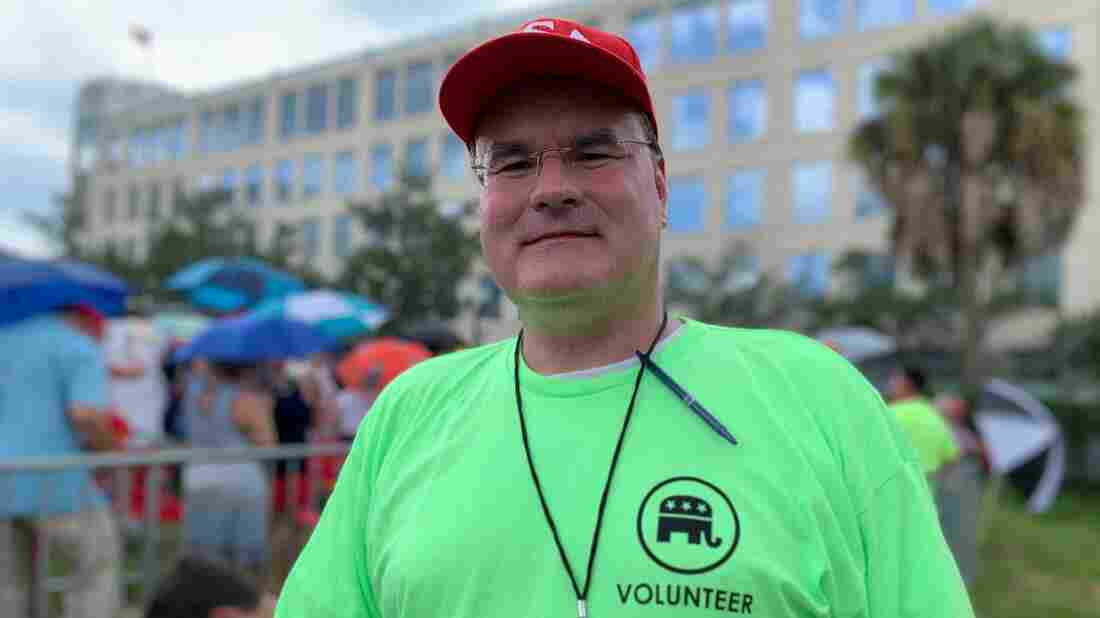 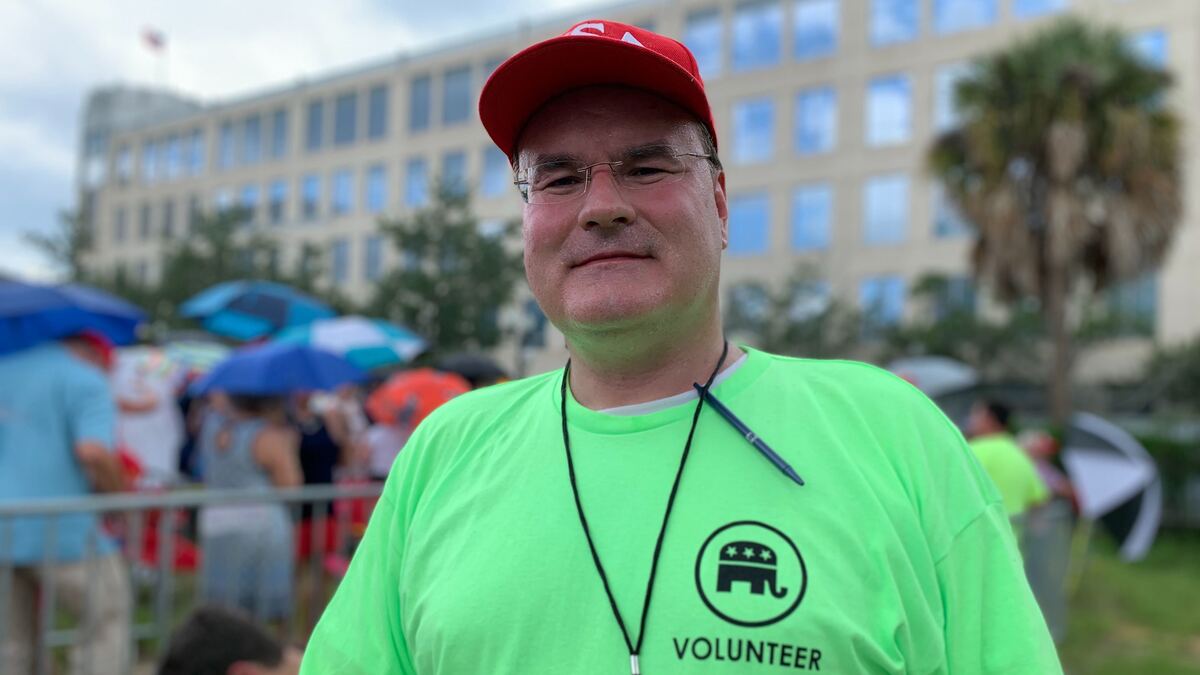 "We're here to help you," Nick Balevich shouted, clipboard in hand. "Is anyone here not registered to vote?"

Balevich has always been a Republican. But, frustrated with George W Bush and the Iraq war, he tuned out in 2008 and 2012. But after attending several Trump rallies in 2016, he started volunteering.

Other volunteers asked people in line to sign a petition to support Florida's governor Ron DeSantis on legislation related to sanctuary cities and to support Trump on immigration policy.

In order to win signed memorabilia, they'd also need to write down their address and other contact information. It was another way for the campaign and RNC to gather information about rally attendees and their views.

"They're trying to learn what issues motivate their supporters and what that information is valuable for is messaging to turn people out to vote," said Robby Mook, who managed Hillary Clinton's 2016 campaign with an emphasis on organizing.

What the Trump campaign and Republican party are doing isn't new. It's an approach first pioneered by George W Bush's re-election campaign in 2004. Barack Obama and Hillary Clinton refined the tactics further but the analytical tools are more powerful than ever.

"Computing power has just gotten a lot more effective over the last few years and so gathering this data at a mass level helps you generate insights that can be powerful," said Mook. He called efforts to harness all the data a "space race" between the parties.

According to Bully Pulpit Interactive, which tracks social media advertising by campaigns, the Trump campaign amped up its Facebook ad spending in Florida in the two weeks leading up to the rally, and including number of ads related to immigration. Facebook ads are a cheaper, faster way for campaigns to test which messages work.

The more a campaign can learn about its supporters, the more effectively it can use that information to get them out to vote come Election Day. And Mook says he expects 2020 won't be about persuasion, instead it will be about turning out core supporters on both sides.

"I believe the campaigns are going to be more focused on squeezing out their base a little bit more than they are trying to win the middle," said Mook. "And so in that in that strategic setting, it's really really important to understand who your base is and understand the kinds of people that are excited and how to get them even more excited."

And Mook says that with a massive Democratic field that's still sorting itself out, the Trump campaign has a big head start in terms of organizing. It's just one of the advantages of incumbency.