Accessibility links
Harry And The Potters Return To Find, And Help Heal, A World Full Of Dark Magic The punk-ish duo, made up of brothers Paul and Joe DeGeorge, helped pioneer the micro-genre of "wizard rock" in 2002. Now, much like You-Know-Who (but benevolent), they've returned.

Harry And The Potters Return To Find, And Help Heal, A World Full Of Dark Magic

Harry And The Potters Return To Find, And Help Heal, A World Full Of Dark Magic 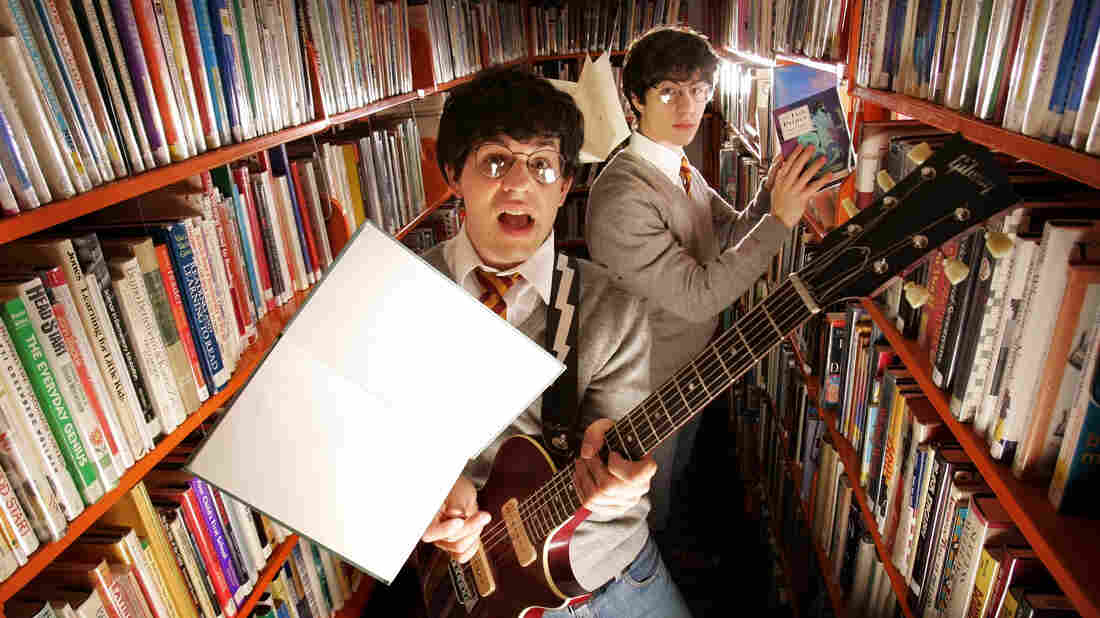 Paul and Joe DeGeorge (left and right, respectively) of Harry and the Potters, photographed in 2005. That same year, the brothers founded the Harry Potter Alliance, which encourages young readers of the eponymous book series to become active in their communities. Dina Rudick/The Boston Globe via Getty Images hide caption 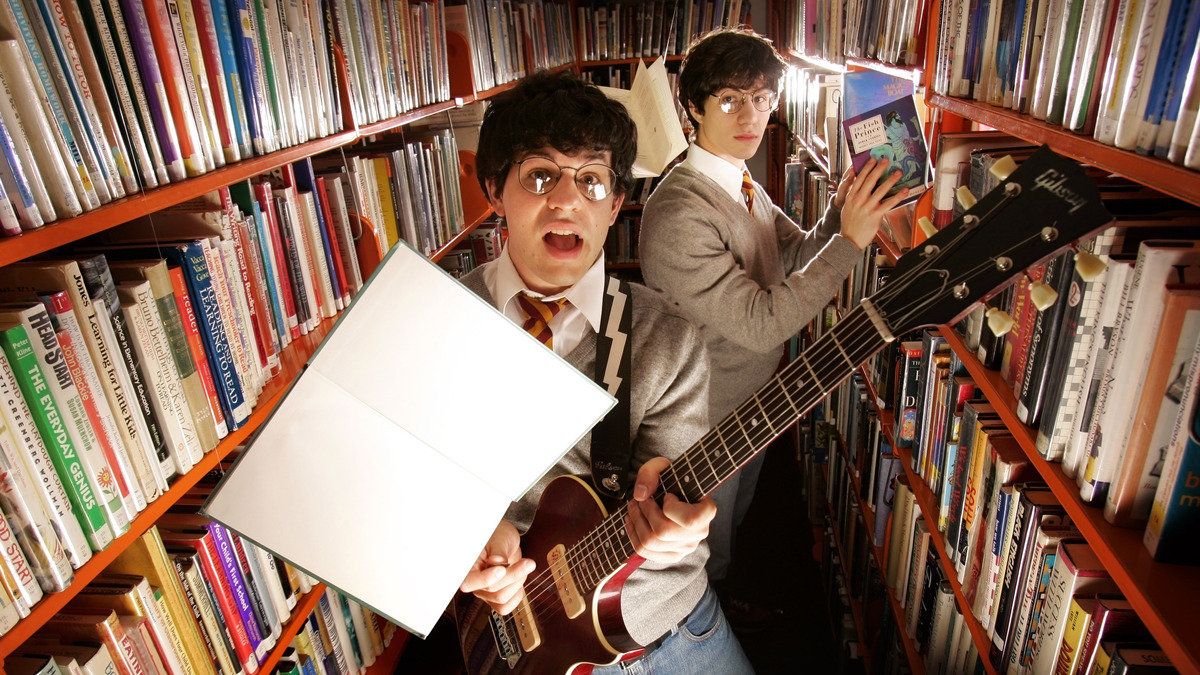 Paul and Joe DeGeorge (left and right, respectively) of Harry and the Potters, photographed in 2005. That same year, the brothers founded the Harry Potter Alliance, which encourages young readers of the eponymous book series to become active in their communities.

One morning in 2010, a long-awaited piece of mail arrived at Deanna Martinez Neidlinger's home in Tacoma, Washington. It wasn't a Hogwarts letter, but for her three children – aged three, six and nine years old at the time – it might as well have been delivered by owl. Enclosed was a copy of the charity compilation album Jingle Spells 4, which included "Hogwarts Lullaby," a song that the family wrote and recorded together.

"The kids were able to hear themselves on a real-life CD and everything," Martinez Neidlinger remembers. "My three-year-old played the glockenspiel."

The generation that came of age alongside Harry, Ron and Hermione is all grown up now, maybe with children of their own, just like the trio themselves in the series' epilogue. But even though the world has known the fate of the boy wizard since 2007, hundreds of professional and first-time musicians alike have carved out a lasting community for fans through "wizard rock," a genre of music about J.K. Rowling's magical world.

Before there were annual fan conventions, Fantastic Beasts, or Potter theme parks, there was Harry and the Potters. In 2002, brothers Paul and Joe DeGeorge wondered what songs The Boy Who Lived would write if he were in a scrappy, DIY punk band. What they initially thought of as a fun novelty band ended up birthing a significant contribution to Harry Potter fandom. With influences from Nirvana to They Might Be Giants, Harry and the Potters mixed the activist ethos of punk rock with the unabashed enthusiasm of nerd culture to pioneer a genre as progressive as it is geeky.

"Wizard rock in general has always been fueled by this do-it-yourself attitude of, 'Hey, I got my songs, I got my band name, let me go out and book a show wherever, whether it's a library, or a bookstore, or a friend's backyard,' " says Paul DeGeorge.

Soon, acts like Draco and the Malfoys, the Whomping Willows, the Moaning Myrtles, the Remus Lupins, the Ministry of Magic and the Mudbloods began sharing their self-recorded music online among fans of the series.

As recently as last summer, Stephanie Anderson – who performs as Tonks and the Aurors – toured behind Potter-themed rock songs like "Wizard Rock the Vote" and "Yes All Witches" in anticipation of the 2018 midterm elections. At every show, Anderson, clad in black and yellow Hufflepuff gear, distributed voter registration resources to fans.

(Even musicians outside of the wizard rock sphere are referencing Potter in order to envision a better world. In the recently released music video for "BALDWIN," Jamila Woods depicts a "Black Hogwarts" in Chicago and invites black youth to imagine what their dream school would be like.)

When Harry and the Potters takes the stage – in costume, with Gryffindor ties, round glasses and lightning-bolt scars – the duo empowers the crowd with songs about empathy and love as a weapon against corruption and injustice.

"What they do is incredible — I've been telling people this for almost two decades now," says Melissa Anelli, organizer of LeakyCon (the largest Harry Potter fan convention) and author of the New York Times bestseller Harry, A History. "You watch a Harry and the Potters show, and somehow the bridge from, 'Here's a song about my favorite book series!' to 'I need to use my musical, magical voice out in the world!' happens in ninety minutes."

Paul and Joe DeGeorge cemented their commitment to the intersection of music and social justice in 2005, when they co-founded the Harry Potter Alliance (HPA), a non-profit that encourages fans to apply the lessons they learn from the Potter books to real-world activism. Since its founding, the HPA has donated almost 400,000 books to libraries around the world, raised over $123,000 for disaster relief efforts and successfully lobbied Warner Brothers to use ethically-sourced chocolate in its Potter­-branded candies.

"I think what the connection between nerdom and activism is, is that it helps you use stories to access why you can't continue to stay complacent," says Anelli. "So when you get something like Harry Potter, that has tolerance and equality right at its core, the fans are going to be interested in those things as well."

So, in a time of sociopolitical upheaval, it's fitting that the "grandfathers of wizard rock" Harry and the Potters have just released their first album in thirteen years, Lumos.

Each of the Potters' three previous albums chronicles a particular time span in Harry's life, but the band had not yet recorded an album about Harry Potter and the Deathly Hallows, the final book in the series. "We were like, 'it's not time, it's not time,' for all of like, twelve years, and then finally, it got to the point where we were feeling like we needed to make time," says Paul DeGeorge. "It wouldn't be appropriate for us to continue existing and performing as a band without addressing the current political climate."

Lumos is the band's most political record yet. It is cutting, yet never didactic. "Yes, it is overtly about the political direness that we're in right now, but there is not a moment that it is not about the actual plot of Deathly Hallows either," Anelli notes.

A peppy-yet-dramatic surf rock song, "On the Importance of Media Literacy Under Authoritarian Rule," speaks for itself. "What's the narrative? / Who's it benefitting?" asks Paul DeGeorge in the chorus. Meanwhile, in the funky jazz tune "Hermione's Army," the Potters point out what makes this girl-genius heroine so great: "She's not waiting for the world / she's gonna push it there."

But, like the Potter books themselves, Lumos isn't all darkness – the DeGeorges parody the romance-that-never-was on "Where's Ron," a duet that features Kimya Dawson of The Moldy Peaches in character as Hermione. The "platonic power ballad" even brought early YouTube stars Potter Puppet Pals out from a two-year hiatus to film a sentimental, yet silly music video.

This summer, Harry and the Potters will tour their fourth studio album at libraries across America. But the upcoming tour and new album are more than just a source of nostalgia for fans who may attend their first wizard rock concert in a decade. This time, perhaps, with children of their own in tow.

"One of the things I was thinking about as we were putting this album together is trying to create moments for parents and kids to talk about not just Harry Potter, but talk about real world issues," says Paul DeGeorge. On "No Pureblood Supremacy," which refers to a wizarding construct that parallels the white supremacist movement, Harry and the Potters sing, "These pureblood identity politics / are nothing more than arrogance."

Wizard rock has never been just about finding a creative way to engage with J.K. Rowling's universe – it's a way to make activism accessible for people of all ages through a shared love of stories.

"It really helped me to teach my children more about helping others, as inspired by characters that they loved," Martinez Neidlinger says. "Starting our little wizard rock band was the kind of thing parents hope for, as we instill values."

This is the genius of Harry and the Potters' family-friendly punk music – that anyone, even a three-year-old glockenspiel player, can access a community committed to justice, and maybe learn to play an instrument along the way.