Accessibility links
Trump Wants To Withdraw Deportation Protections For Spouses Of Active Troops The Trump administration wants to scale back a provision that protects the undocumented spouses of military members currently deployed. Activists warn it could be highly disruptive. 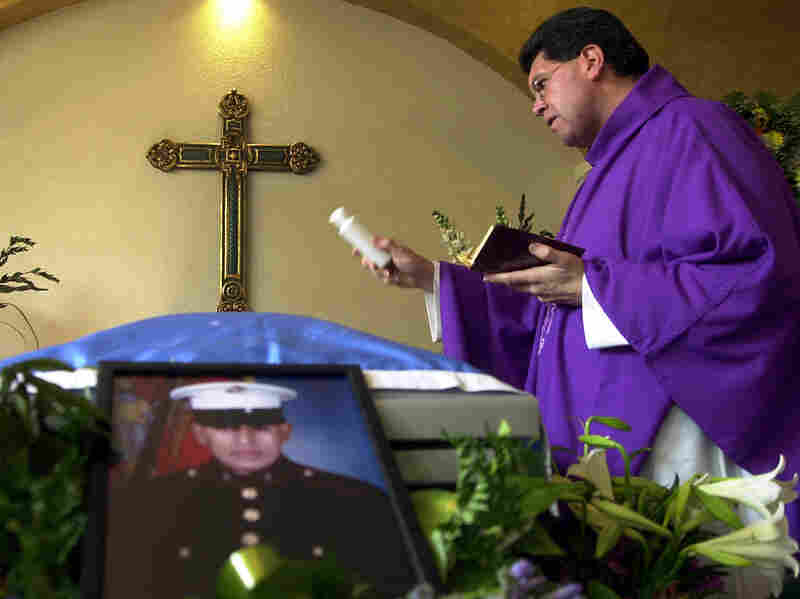 The funeral of Lance Cpl. Jose Antonio Gutierrez in 2003. Gutierrez was born in Guatemala and served in the Marine Corps until he was killed in Iraq — one of a number of immigrants in the military. Moises Castillo/AP hide caption 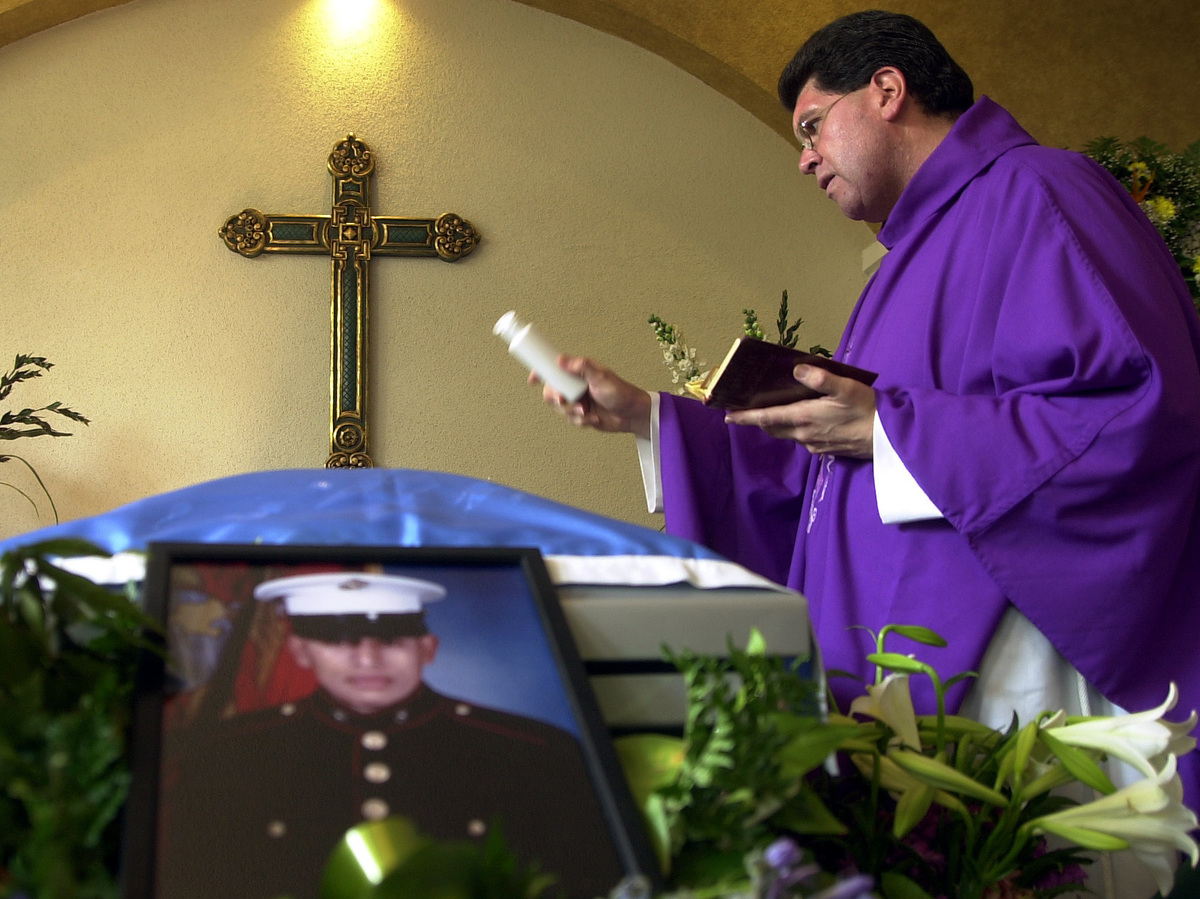 The funeral of Lance Cpl. Jose Antonio Gutierrez in 2003. Gutierrez was born in Guatemala and served in the Marine Corps until he was killed in Iraq — one of a number of immigrants in the military.

The Trump administration wants to scale back a program that protects undocumented family members of active-duty troops from being deported, according to attorneys familiar with those plans.

The attorneys are racing to submit applications for what is known as parole in place after hearing from the wives and loved ones of deployed soldiers who have been told that option is "being terminated."

The protections will only be available under rare circumstances, the lawyers said they've been told.

"It's going to create chaos in the military," said Margaret Stock, an immigration attorney who represents recruits and veterans in deportation proceedings. "The troops can't concentrate on their military jobs when they're worried about their family members being deported."

Officials with U.S. Citizenship and Immigration Services, which offers parole in place as a "discretionary option," declined to discuss questions about the ending of the program.

The program the Trump administration wants to curtail does not protect all immigrants facing removal proceedings from being deported.

It specifically allows military family members who have come to the country illegally — and can't adjust their immigration status — to stay in the U.S. temporarily. A spouse who overstayed a visa, for example, would not be protected under the program.

The original objective of the policy was to minimize disruption to the life of a soldier, sailor, airman or Marine whose family member might have been subject to deportation.

Parole in place enables a soldier serving in Afghanistan, for instance, not to worry that a spouse at home who entered the U.S. illegally might be thrown out of the country while the soldier is deployed.

The spouse has the ability to receive "parole" within the U.S. and apply for a green card — unlike someone without that privilege, who might be deported and required to wait for years to apply.

It wasn't immediately clear how many people are using this now or have in the past.

The procedures are changing as the U.S. government ramps up enforcement proceedings, including against veterans and their family members — sometimes in ways that violate the government's own procedures.

For example, a federal watchdog reported earlier this month that U.S. Immigration and Customs Enforcement did not follow its own policies on deporting former service members since 2013, which included during the Obama administration.

Immigrants have always served in the military and often become citizens. Nearly 130,000 troops have been naturalized from more than 30 foreign countries since Oct. 1, 2001.

Service doesn't necessarily guarantee citizenship for troops, but it can offer them a path to that, as well as some benefits for people related to those serving, such as the parole privilege.

Activists scramble before end to privilege

One government lawyer is urging immigration lawyers to act quickly before the program is officially terminated next month.

"I would advise clients that if they are eligible for [parole in place] to submit it ASAP," a government lawyer warned other attorneys in a message obtained by NPR, adding later: "Wish there was better news to share. Big take-away is that no group is 'safe' any longer."

Carlos Luna, founder and president of a green card veteran chapter of the League of Latin American Citizens, said the ending of parole in place is yet another example of what he called the Trump administration's "war against immigrants."

"There are less and less opportunities for these people serving the country and their veteran family to go through the 'legal channels' and stay here in the country, which for many is the only place they've ever known," Luna said.

Luna cited the Trump administration's decision this year to close all of its international field offices and the fact that military recruits now must serve 180 days of active duty before becoming eligible to apply for naturalization — unless they're in a combat zone.

Previously they only had to wait a day.

Separating the link between service and citizenship

The Trump administration has also made it harder for some immigrants to enlist in the military with hopes their service would lead to an expedited path to citizenship.

The program, known as Military Accessions Vital to the National Interest program, or MAVNI, aimed at bringing in medical specialists, fluent speakers of challenging languages and other special skills.

Between 2008 and 2016, 10,400 individuals enlisted in the U.S. military through the MAVNI program, according to Defense Department data.

A federal judge in Seattle later ordered the Defense Department to stop discriminating against naturalized citizens who volunteered to serve in the military under the program.

The White House hasn't addressed the parole-in-place changes specifically, but information about them is reaching immigration attorneys against the backdrop of the ongoing political war over the southern border.

Trump, who has made immigration and the border his signature issue, urged Congress on Wednesday to close what he called the "loopholes" that remain.

The Republican Senate just passed bipartisan humanitarian assistance for our Southern Border, 84-8! In addition to aid, Congress must close the catastrophic loopholes that are driving the Crisis. We must end incentives for Smuggling Children, Trafficking Women, and Selling Drugs.

Stock, the immigration attorney, meanwhile said she thought it might be corrosive to military readiness if troops overseas must begin worrying that their family members back home might be deported.