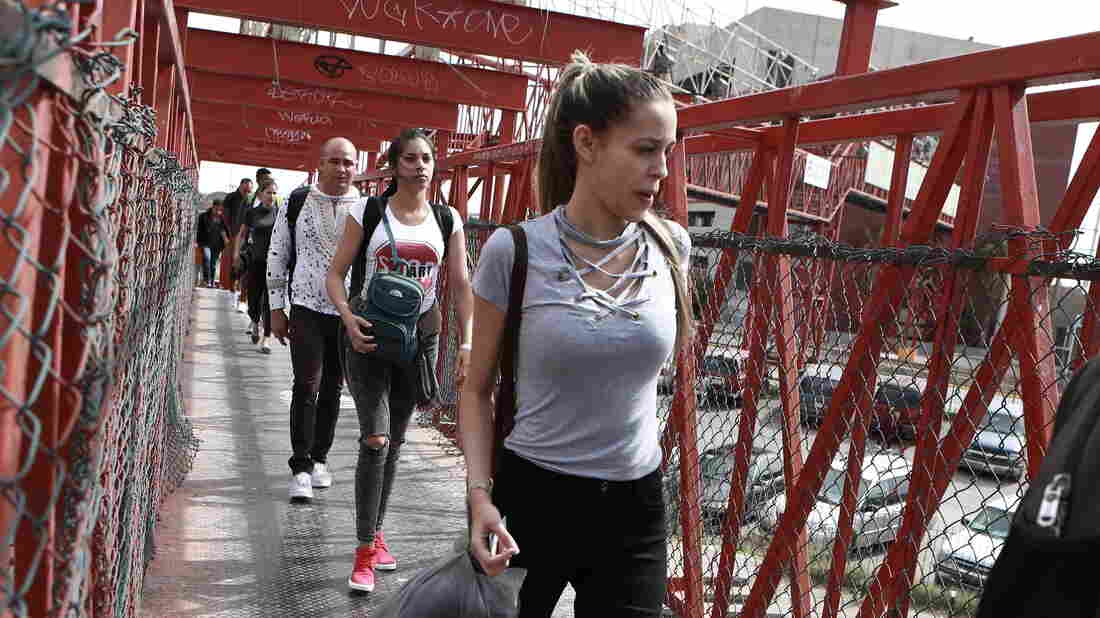 Cuban migrants cross a bridge in Mexico to be processed as asylum-seekers in the U.S. The labor union representing asylum officers claims the policy formally known as the Migrant Protection Protocols is a "widespread violation" of international and domestic law. Christian Torres/AP hide caption 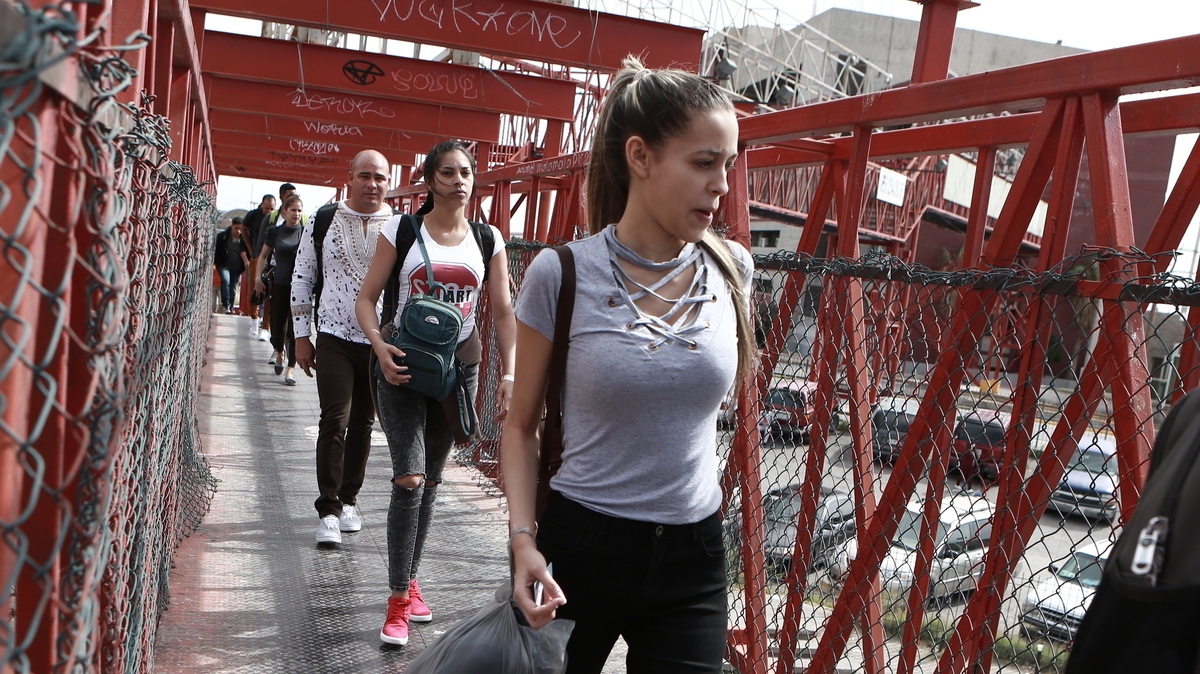 Cuban migrants cross a bridge in Mexico to be processed as asylum-seekers in the U.S. The labor union representing asylum officers claims the policy formally known as the Migrant Protection Protocols is a "widespread violation" of international and domestic law.

The labor union for federal asylum officers is condemning President Trump's policy of sending migrants to Mexico as they wait for their assigned court dates in the U.S., calling the Trump administration's program "fundamentally contrary to the moral fabric of our Nation."

The asylum officers, who are tasked with carrying out a policy widely known as "Remain in Mexico," said they have a duty "to protect vulnerable asylum seekers from persecution," claiming that Trump's policy creates a conflict between their professional responsibility and the president's directives.

The policy formally known as the Migrant Protection Protocols is a "widespread violation" of international and domestic law, the asylum workers' union wrote.

"[The Migrant Protection Protocols program] violates our Nation's longstanding tradition and international treaty and domestic obligation not to return those fleeing persecution to a territory where they will be persecuted," the union, the American Federation of Government Employees Local 1924, wrote to the 9th Circuit Court of Appeals in an amicus brief filing.

It is significant and unusual for a sitting president's own federal workers to publicly criticize a policy they have been directed to follow. The asylum officers say the MPP program undercuts a core part of their job and may endanger the lives of asylum-seekers, so the officers are asking the federal appeals court to halt the program.

"The MPP, contrary to the Administration's claim, does nothing to streamline the process, but instead increases the burdens on our immigration courts and makes the system more inefficient," the federal workers wrote.

The policy does not allow for all migrants to be asked whether they fear persecution in Mexico, only providing for that discussion if the applicant raises it, the workers said.

And, according to the filing, some migrants do have a reason to be uneasy about waiting in Mexico for their U.S. court hearing.

The union said human rights abuses, gang violence and kidnappings remain a problem in Mexico, citing a State Department report. In particular, migrants who are ethnic minorities could "face persecution in Mexico that is similar to the persecution they face in their home countries."

The union writes in the filing that helping advance the MPP could place the lives of migrants hoping to win asylum back into danger, which is "something that they did not sign up to do when they decided to become asylum and refugee officers for the United States government."

In a separate friend-of-the-court brief filed Wednesday as part of the same lawsuit, former U.S. officials, including Janet Napolitano, who served as secretary of Homeland Security in the Obama administration, and James Clapper, former U.S. director of national intelligence, write that the Trump program runs afoul of international commitments.

"Violating this obligation does more than place these particular migrants in harm's way — it threatens the foundation of the international refugee system, which depends on cooperation between countries that cannot be sustained in the face of flagrant violations under the MPP," the former federal officials write.

They argue to the appeals court that there is "no evidence" that asylum-seekers pose a security risk to American citizens, nor is there any basis for the claim that migrants who apply for asylum are smuggling illegal drugs over the border.

A federal judge initially blocked the program, but in May, the 9th Circuit overruled the lower court and allowed the program to continue. The American Civil Liberties Union and other groups are challenging the policy that has sent many thousands of migrants back to Mexico since January.

Trump has long slammed what he calls catch-and-release policies, where migrants seeking asylum are released into the U.S. while they wait for their immigration court hearings.

The filings come as Trump officials push Congress to pass $4.6 billion in aid to address humanitarian problems at the border. The Republican-led Senate passed a bill on Wednesday that is a version of the emergency border aid bill passed by the House. The bill advanced the same day lawmakers in Washington fielded questions about a disturbing photo of a drowned father and daughter. The pair are face-down, having died attempting to cross the Rio Grande, fleeing poverty in El Salvador.

As Trump continues to crack down on border crossings, the flow of migrants across the country's southern border has not slowed. In fact, migration has accelerated recently.

In May alone, according to U.S. Customs and Border Protection, the number of apprehensions along the U.S.-Mexico border exceeded 144,000, the highest one-month total in more than a decade. Many of the migrants are escaping violence and poverty in Central America.