Accessibility links
Stream J Balvin And Bad Bunny's Surprise Album, 'Oasis' The Latin trap wunderkind and the current centerpiece of urbano have released a short suite of much-anticipated music, striking a balance between appeasement and experimentation. 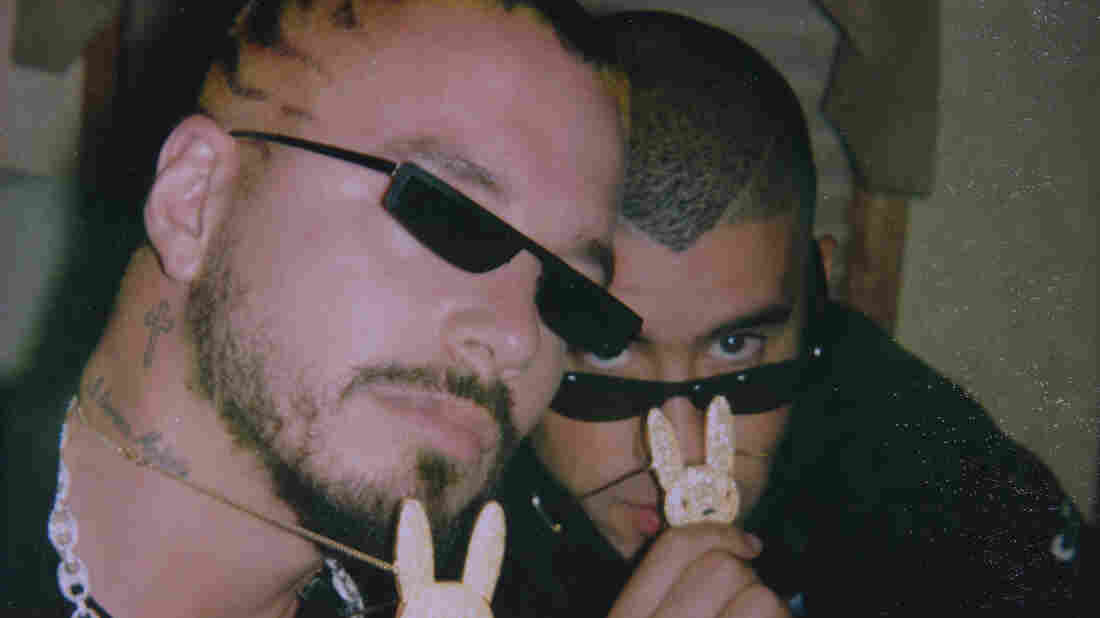 toggle caption
STILLZ/Courtesy of the artist 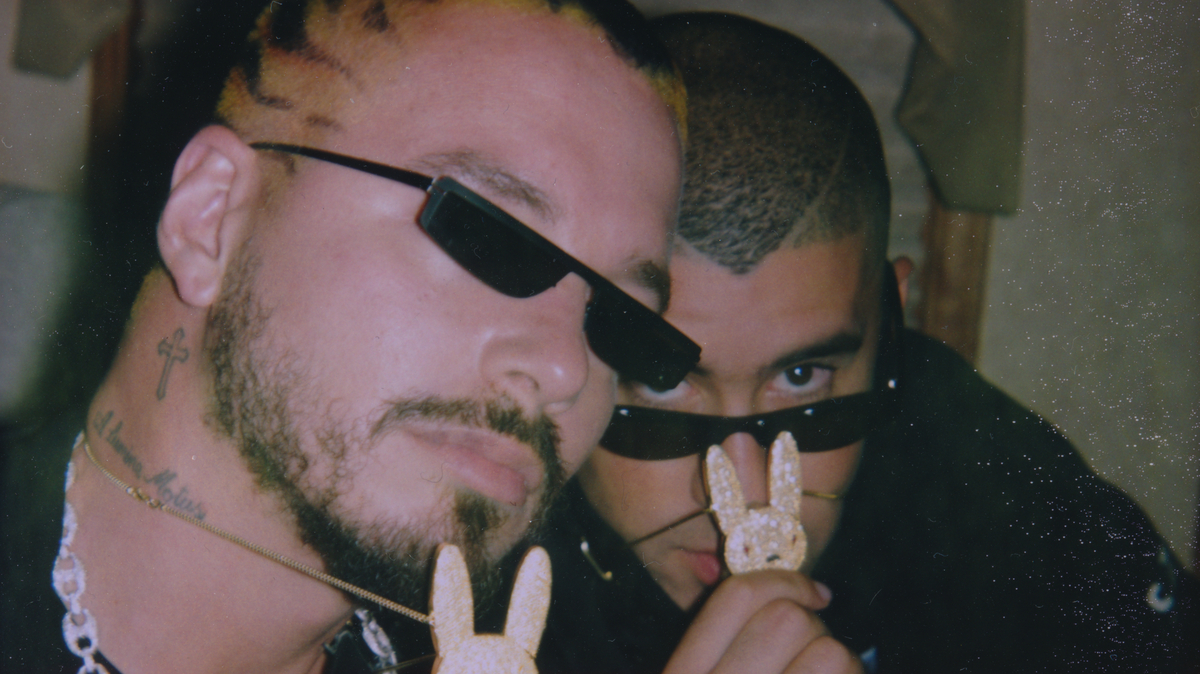 In the world of English-language music, chances are that "new Oasis" means something very different to you than it does to the Spanish-language Internet. When the possibility of a joint album between two of the biggest names in urbano, J Balvin, the Colombian global domineer of 2017's "Mi Gente" and longtime reggaetonero, and Bad Bunny, the 25-year-old face of Puerto Rican trap, became a reality back in September, it was a big deal. Balvin confirmed to radio host Ebro Darden, who casually suggested a potential joint album, that he'd title the whole of their six or seven unreleased songs together Oasis — a word written the same in English and Spanish. Before long, Balvin and Bad Bunny were name-dropping Oasis on the outro to Jhay Cortez's "No Me Conoce" remix. Cryptic Twitter teases ensued for months, until Oasis finally dropped today.

When Bad Bunny released his surprise debut album X100PRE on Nochebuena last year, he had already reached an improbable level of fame — which he seems to carry weightlessly. By the end of that year, the then-24-year-old had racked up a fillerless arsenal of viral singles, like "Chambea" and "Estamos Bien," with the help of producers like Tainy, DJ Luian and Mambo Kingz. Even before all of that, his first song with J Balvin, 2017's "Si Tu Novio Te Deja Solo," became the first Latin trap song to win a Latin Grammy. His feature on last year's remix of "Te Boté" helped generate nearly two billion plays for the song on YouTube. And of course, he and Balvin joined Cardi B on "I Like It," a trap-boogaloo callback to one of the earliest Latin pop movements in the U.S.

Oasis, as the pair have obliquely noted in interviews, refers to refuge in what is absent in the landscape. Balvin expanded into full pop reggaeton on 2018's Vibras, over a decade into a well- and long-established career across Latin America. The album was a carefully considered and produced (by longtime Balvin collaborator Sky and Tainy, as is Oasis) pop crossover, if you can still call it that given the ubiquity of his fame, entirely in Spanish. Yet pop-friendly reggaeton wasn't going to move the needle forward; if Vibras forced the world to take another listen, X100PRE challenged what the future of the global urbano movement, sustained by Puerto Rico for the past two decades, would sound like. 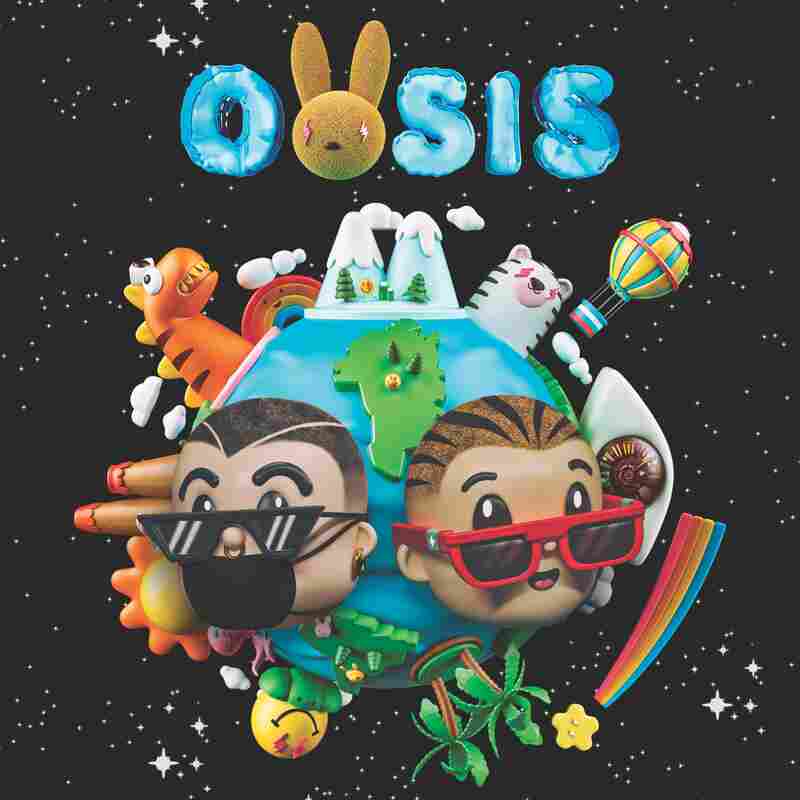 Oasis succeeds in spite of the industry churn around it. The life cycle of Latin "explosions" in the American music market necessitates constant content. The billions of streams that giants like Ozuna or Balvin or Daddy Yankee guarantee with their features on others' songs — even their less-than-inspired contributions — have become something of a white whale for American labels. (Every week, it seems like the Barrio Fino auteur is lending his flow to some industry favorite.) As longtime fans and listeners, the commitment to support a finally trenchant, if watered down, urbano movement in the American mainstream can take up real estate for the younger vanguard of Latin trap to stay innovative and uncompromising. It can't all be remixes. It certainly can't all be Jonas-Brothers-en-español. Novelty ends. Perreo is forever.

In that vein, Oasis embraces its Caribbean identity, moving from trap to reggaeton to ukulele-driven alt-rock ("Un Peso" features Argentine band Enanitos Verdes' Marciano Cantero) to Afrobeat over just 31 minutes. Bad Bunny is fundamentally an oddball, and his best verses wave his proud boricua and freak flags. On "Yo Le Llego," he introduces himself with a cheeky allusion to Balvin ("donde esta mi gente?") and, in an abuela's voice, as "Benito Antonio Martínez Ocasio / directamente del espacio." The trap interpolation of a punto guajiro on an upright bass makes the call-outs to Puerto Rico, Chile and Santo Domingo feel more genuine and colloquial than the globalism of "Mi Gente."

How Bad Bunny Skipped Categories And Skyrocketed To Fame

J Balvin Won't Settle For Anything Less Than World Domination

Yet elsewhere on the album, the two take greater liberties with the pop formula. "Cuidado Por Ahi" is Oasis' most true-to-form reggaeton track, thanks in part to Benito's "Yo quiero ser tu daddy pa' darte gasolina" reference and the anonymous moan of a female background singer, just heavy-handed enough to be an artistic choice. The final track, "Como Un Bebé," is an Afrobeat dancehall experiment with Mr. Eazi, the Nigerian singer and pioneer of banku music, ending the album with its most overt recognition of urbano's Afro-Caribbean roots.

Post-"Mi Gente," pop reggaeton artists like J Balvin must first meet the expectations of the communities that built their base and their sound to survive; Bad Bunny, in his handful of years as Latin trap's divining rod, has never lost that prerogative. Oasis is proof that the success of the current urbano movement isn't indebted to last year's earth-conquering gimmicks on Vibras or "I Like It," random Spanish-language verses on English-language songs or, like, a Katy Perry remix of "Con Calma." It's indebted to honesty.

That, and a respect for the intelligence driving the loudest beat in the world.