Accessibility links
Kamala Harris' Moment, Joe Biden's Bad Night: Democratic Debate Takeaways Sen. Kamala Harris of California was the breakout star of the second part of the Democratic debate — and may have reshaped the contest as she took on former Vice President Joe Biden over race.

5 Takeaways From Night 2 Of The Democratic Debate

When Sen. Kamala Harris of California launched her presidential campaign in January and drew a crowd of 20,000 in Oakland, Calif., she raised some eyebrows about the potential for her candidacy.

But during the early stretch of this Democratic primary campaign, Harris struggled to catch on or stand apart — until Thursday night.

Harris showed in the second night of the first Democratic presidential primary debate why so many thought she had such promise as a candidate from the beginning. She commanded the stage, was crisp, and showed skill and courage in going after former Vice President Joe Biden.

Here are five takeaways from the second night of debates:

1. Harris needed a breakout moment, and she got it

Harris had more than one good moment during Thursday night's debate. In a debate where the candidates were much more willing to engage than they were on Wednesday night, Harris interjected early on and grabbed the spotlight. As several candidates talked over each other, she said, "America does not want to witness a food fight; they want to know how we are going to put food on their table."

Then she was impassioned, direct and specific when talking about immigration and what she would do in her early days as president to deal with the issue. But the key exchange of the debate was when she took on Biden over race. He had been on the defensive coming into the debate for his comments at a fundraiser about how he worked with people in the Senate, even segregationists with whom he disagreed.

Harris said she has respect for Biden and did not believe Biden is a racist, but was clear and direct about how she felt he handled it and then invoked her own childhood of having been bused as part of school integration. And Biden didn't seem to know which direction to go with the line of attack. He got out of it by saying, "Anyway, my time's up."

2. Biden did not have a good night

Former Vice President Joe Biden, left, and Sen. Bernie Sanders of Vermont stand next to each other during the second night of Democratic presidential debates. Drew Angerer/Getty Images hide caption

Former Vice President Joe Biden, left, and Sen. Bernie Sanders of Vermont stand next to each other during the second night of Democratic presidential debates.

On everything from defending his comments about those segregationist senators to his Iraq War vote to what would be the first things he would do as president (defeat Donald Trump), Biden looked out of touch with the Democratic Party of 2019.

What's worse, though, is what a debate like this could do to the premise of his candidacy — that he's the strongest candidate to take on President Trump. That's what's been holding Biden up in the polls, and he can't afford to have his electability bubble pierced and look like a risky choice to put on stage against Trump.

Biden has a reservoir of support and good feelings within the party, so he can't be written off after one night, but his best hope might be that lots of people aren't tuned in yet and were watching something else — or went to bed early.

3. Sanders and Buttigieg were flat

Sanders was the one itching for the fight with Biden, but Harris stole his thunder. Sanders has been saying the same things for 40 years about the problems facing the country, and it sounded like it on Thursday night. What was remarkable was that, despite his usual fluidity with what he sees as systemic problems afflicting America, he couldn't muster up what his priorities would be to accomplish his "revolution."

Recap: Night 2 Of The Democratic Primary Debate In 100 Words (And 7 Videos)

Every president has had to prioritize. President Barack Obama had to try and shore up the economy with the Recovery Act after the Great Recession; then, to the consternation of immigration activists, he went for health care. Those are the real, practical choices a president has to make as a legislative strategy, and Sanders simply criticized the moderator for being reductive.

Pete Buttigieg struggled to command the stage in what was his biggest opportunity to speak to his widest audience yet about his message of generational change. But the racially polarizing police shooting in South Bend, Ind., where he is mayor, has consumed his campaign in the past couple of weeks.

For his part, Buttigieg was ready for the questions about why black representation on his police force has not improved during his tenure ("Because I couldn't get it done"). He fell on his sword in a show of humility rarely seen in politics, but how that will play with voters is unclear. Some will undoubtedly like and respect it; others might see it as weakness, especially facing a candidate in Trump who apologizes for nothing.

4. The candidates showed themselves to be very liberal

Democrats, living under Trump, are mad as hell, and they are frustrated. The past few presidential elections have had even more extreme pendulum swings than the last — George W. Bush resulted in Barack Obama, who was followed by Trump.

So it might make sense then that Democrats are proposing policies that are very liberal and make them feel good. Here's some of what they are proposing (with who said they support them), based on two nights of debates:

The problem is some of this is not very popular. Medicare for All is popular as a slogan, for example, but eliminating private health insurance is not. Some 6 in 10 people are against it, according to the Kaiser Family Foundation.

(*Harris told NBC after the debate that she misunderstood that question, and that she was saying she would abolish her own private insurance plan — not everyone else's.)

Part of this more liberal shift within the party is a reaction to Trump. And part of it is because the party has gotten more liberal. In 2003, during the Bush administration, two-thirds of Democrats considered themselves "moderate" or "conservative." Today, that's only about half, while the number of Democrats considering themselves "liberal" has gone up from 29% to 46% in the past 16 years. 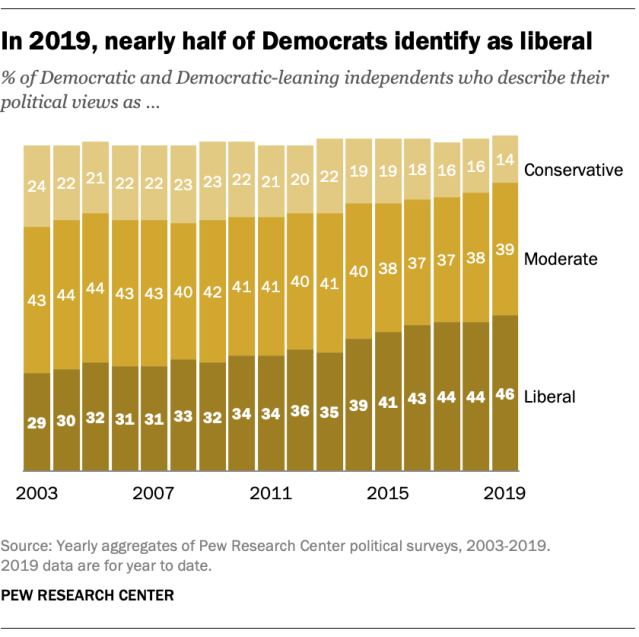 The priorities of voters who align with the parties have changed over the last two decades — and moved farther apart.

5. The race was reshaped after a two-day debate

If it was clear going into Wednesday and Thursday's extended debate that Biden and Sanders were the clear leaders in the field, that is simply not the case now. Instead, Harris and Warren proved their mettle. What was clear, perhaps, is that while there are a lot of candidates, there are really only about half a dozen who have stood out.

Biden and Sanders will still be in the mix, as are Sens. Cory Booker of New Jersey and Amy Klobuchar of Minnesota. And former Obama administration Housing and Urban Development Secretary Julián Castro was one lower-tier candidate who was able to vault himself into the conversation. Meanwhile, former Rep. Beto O'Rourke of Texas and Biden may have hurt themselves most of all the leading candidates.

One thing is clear — there is a generational battle going on within the Democratic Party, and a lot of it centers on views of race and identity in a campaign that has the most diverse field in the history of presidential campaigns. That's especially prominent in the age of Trump and stands in stark contrast to the way he has campaigned and governed.