Accessibility links
Neo-Nazi Who Rammed His Car Into Charlottesville Protesters Gets Life James Fields rammed his car into a crowd of anti-racist protesters in 2017, killing Heather Heyer and injuring many others. He pleaded guilty to 29 federal hate crimes, avoiding the death penalty. 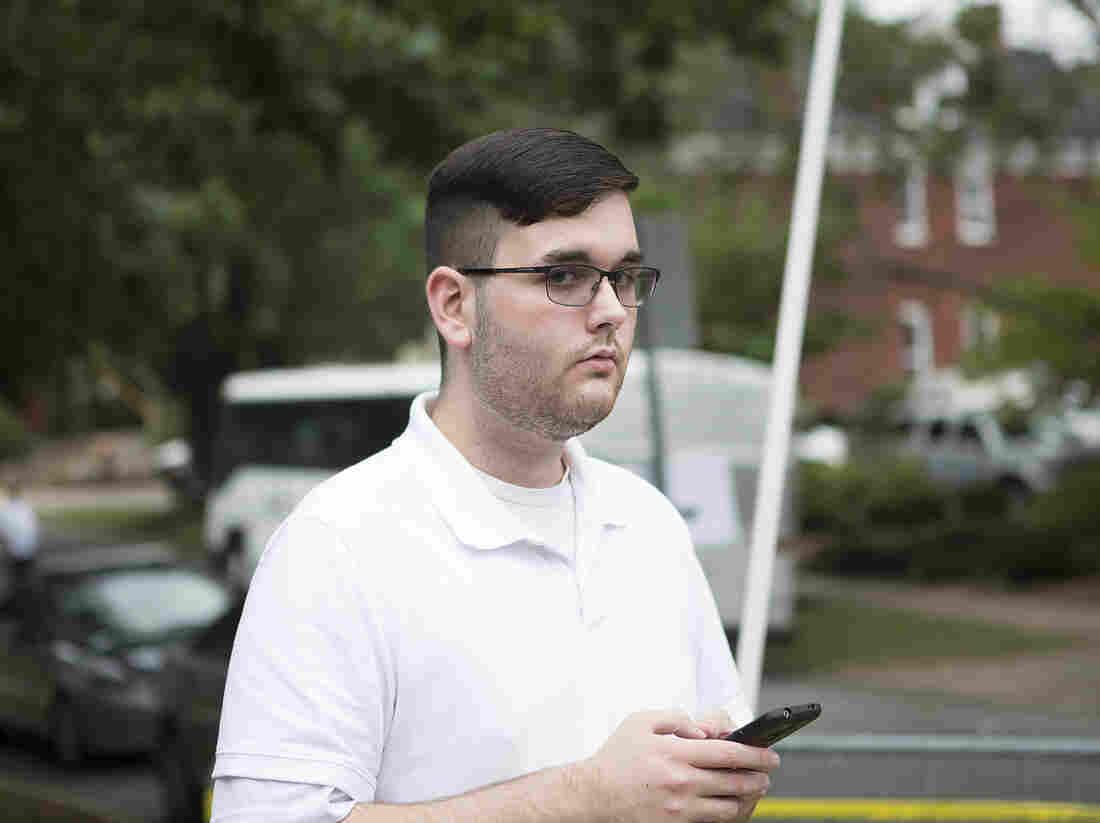 James Fields Jr., who pleaded guilty to federal hate crimes, was sentenced on Friday to life in prison. Fields rammed his car into a crowd of anti-racism protesters in Charlottesville, Va., in 2017, killing 32-year-old Heather Heyer and injuring dozens of others. Eze Amos/AP hide caption 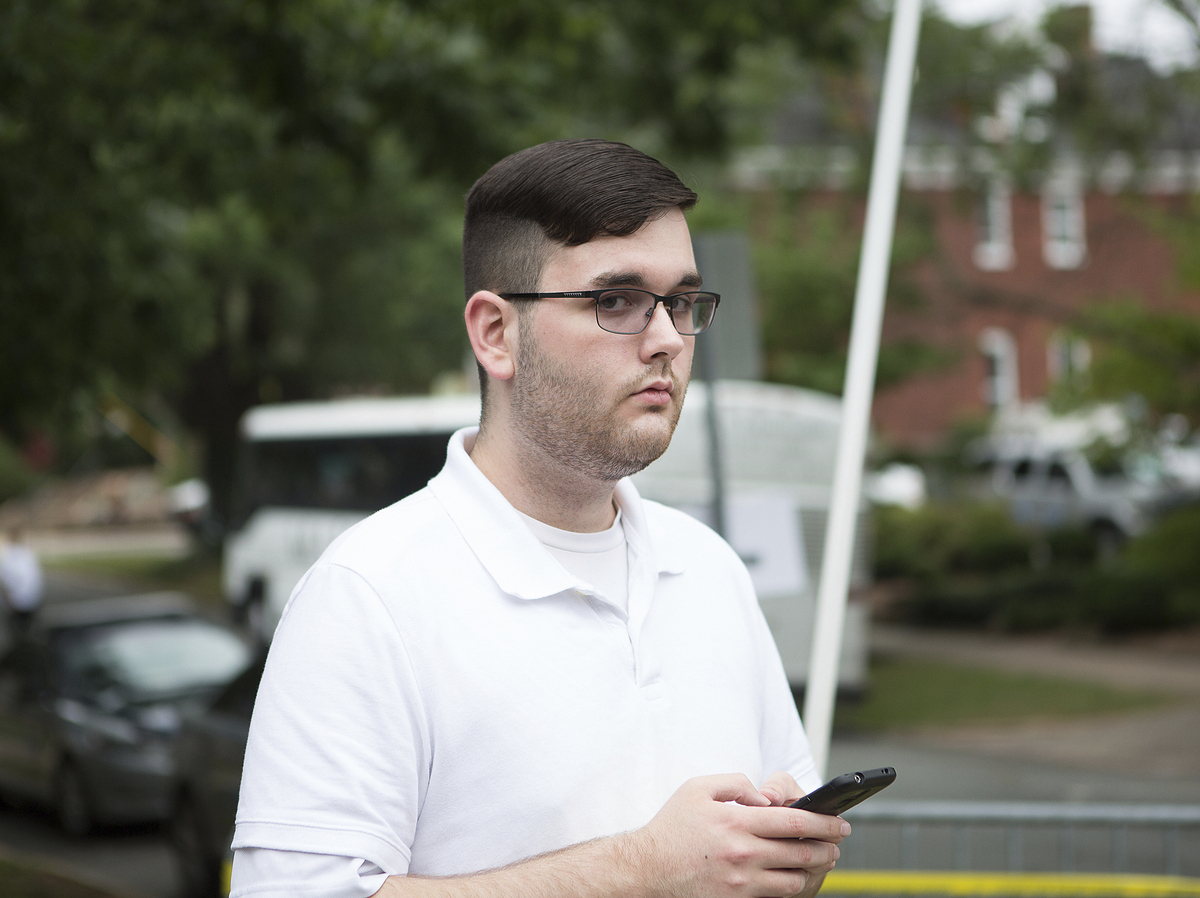 James Fields Jr., who pleaded guilty to federal hate crimes, was sentenced on Friday to life in prison. Fields rammed his car into a crowd of anti-racism protesters in Charlottesville, Va., in 2017, killing 32-year-old Heather Heyer and injuring dozens of others.

The man who drove his car into a crowd of anti-racist protesters in Charlottesville, Va., killing one person and injuring 35 has been sentenced to spending the rest of his life in prison.

A federal judge issued the sentence of life without the possibility of parole on Friday for self-proclaimed neo-Nazi James Fields Jr., 22, of the Toledo, Ohio, area.

The judge's punishment, announced in a Charlottesville courtroom, came after numerous survivors delivered emotional testimony about the psychological and physical toll the attack caused.

After the hearing, prosecutors described the 2017 attack as heinous.

"It was cold-blooded. It was motivated by deep-seated racial animus," Thomas Cullen, U.S. attorney for the Western District of Virginia, told reporters. He said Fields' lethal car-plowing was calculated, calling it "a hate-inspired act of domestic terrorism."

"Charlottesville is never going to be the same," Cullen said. "It will be with this community, and the commonwealth of Virginia, and this country, for a long time."

Survivors who testified included Rosia Parker, a longtime civil rights activist in Charlottesville. She told the court she watched the attack from just feet away.

"You could have done anything else but what you did," Parker said, according to The Associated Press. "You deserve everything that you get."

In legal filings presented to the judge on Friday, Fields' lawyers said while he committed a "terrible crime," they asked the judge to also consider Fields' "traumatic childhood and his mental illness," wrote Fields' federal public defender, Lisa Lorish.

Federal prosecutors had asked the judge for a life sentence for Fields. A plea deal brokered in March took away the possibility of the death penalty, and federal prosecutors and Fields' lawyers agreed that federal sentencing guidelines called for a life sentence. As part of the deal, Fields pleaded guilty to 29 of the 30 federal hate crimes he faced and is not eligible for parole.

Prosecutors had said Fields' crimes were "so horrendous — and the maiming of innocents so severe — that they outweigh any factors the defendant may argue form a basis for leniency," according to a sentencing document filed by Assistant U.S. Attorney Christopher Kavanaugh before the Friday hearing.

Last week, Fields' attorneys asked for something shorter than a life sentence, citing Fields' age and history of mental illness.

Fields has already been convicted of separate state charges for murdering 32-year-old Heather Heyer and injuring dozens of other people. The jury in that case recommended a life sentence plus 419 years and $480,000 in fines. Sentencing in that case is set for July 15.

Heyer's mother, Susan Bro, said in April that she was satisfied with Fields' federal guilty plea and was not intent on his getting the death penalty. "There's no point in killing him. It would not bring back Heather," she told reporters.

Fields was 20 when he drove his Dodge Challenger through the night from Ohio to attend Unite the Right, a white nationalist rally, in August 2017. The weekend turned deadly when Fields accelerated his car into the group of protesters. Two Virginia State Police troopers investigating the day's events also died when the helicopter they were in crashed.

Before he was sentenced on Friday, Fields offered an apology for "the hurt and loss I have caused," the AP reported.

Lawyers for Fields wrote the court to say that he used Twitter in search of community and "quickly learned that provocative and hateful comments led to more exposure," leading him to follow white supremacist accounts, including Richard Spencer and Mike Peinovich.

Fields' lawyers wrote that he found out about the Unite the Right rally through its organizers' online recruiting campaign.

His attorneys say he had no intent to commit a violent act, instead describing the attack as a "impulsive, angry and aggressive decision."

President Trump said afterward that there was "blame on both sides" for the violence in the college town.